When I was young one of my favorite games was Jumpin’ Monkeys. In Jumpin’ Monkeys the objective was to launch all of your monkeys trying to get them to stick in the tree. I haven’t played the game in many years and it is probably no where near as good as I remember it but to this day I still have fond memories of it. For some reason I have always had a fondness for launching dexterity games. Most of these type of games don’t hold up well for adults but there are occasional games like Flying Kiwis that can be enjoyed by both children and adults. I was hoping that Flying Kung-Fu Frogs could be one of these games. While Flying Kung-Fu Frogs has some interesting ideas, the wildly inaccurate frogs make the game an exercise in luck and patience.

How to Play Flying Kung-Fu Frogs

When one player has all of their frogs on the gameboard, the game immediately ends. 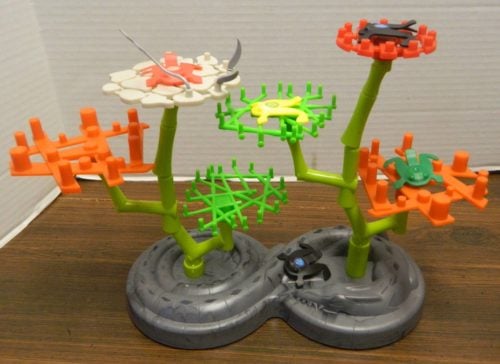 After everyone has totaled their score, the player with the most points wins the game. 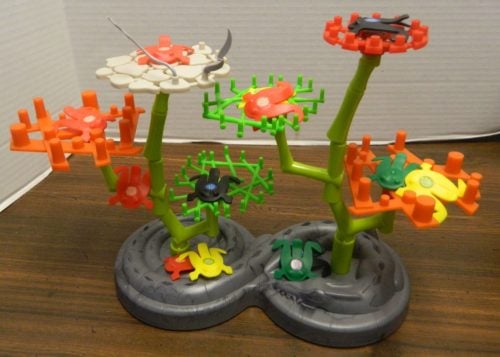 My Thoughts on Flying Kung-Fu Frogs

The children’s launching game genre is probably one of the more crowded children’s board game genres out there. The reason the genre is popular is what kid doesn’t like launching board game pieces though the air? There are many adults (including myself) that enjoy the mechanic as well. I wouldn’t consider the genre to be particularly original though. While the objects you fling and the ultimate goal might slightly change between games, for the most part they play pretty similar to one another. You are just launching your pieces to either score the most points or get rid of all of your pieces first. If you have ever played one of these type of games before you should have a pretty good idea of what to expect out of Flying Kung-Fu Frogs.

While Flying Kung-Fu Frogs shares a lot in common with most launching games, the one area where it somewhat distinguishes itself is with the different scoring zones. Instead of just having one area where you are trying to launch all of your frogs, there are different sections of the gameboard to aim at which reward you with different amounts of points. The most valuable sections are the smallest and the highest in the air making it harder to land a frog in those sections.

In general I like the idea of having different scoring zones. I think it adds an interesting risk/reward element to the game. You could try to aim for the more valuable sections but if you miss your frog could either land in an area where you score zero points or you might miss the board entirely. If you aren’t able to get the frog on the board before another player finishes you won’t score any points for it. Otherwise you could choose to aim for the less valuable sections which should be easier to get frogs on but aren’t worth as many points.  By getting rid of all of your frogs quickly though you limit the amount of time the other players will have. This choice would actually be interesting if it was actually easy to aim the frogs.

Unfortunately aiming the frogs is easier said than done. That is unfortunate because the fact that you can’t really aim the frogs almost ruins the whole game. Maybe it was just the frogs included with my copy of the game but it was near impossible to aim them. I tried shooting them in multiple different ways and nothing seemed to help. The problem is that is really hard to shoot the frogs with any consistency. The frogs seem to either shoot too far or short. There doesn’t seem to be anything in-between. I tried applying different levels of pressure to the frogs and I still ended up with one of the two extremes. It honestly took me at least 20 shots to get a single frog to land anywhere on the gameboard. As I am generally pretty good at launching games, I have a feeling that the quality of the frogs is not the best.

The problem with the wild inconsistency is that it is hard to really gain any skill in the game. With a lot of these type of games you can usually get better the more you play the game. I am not so sure that is possible in Flying Kung-Fu Frogs. Unless you can find a way to shoot the frogs consistently you really can’t learn from past mistakes so it is going to be hard to improve your aim. As you can’t really build up your skill in the game it means that the game mostly ends up relying on luck. You pretty much just launch the frogs at the gameboard hoping they will land on spaces that will score you more points than your opponents.

This lack of accuracy also exacerbates a problem that almost all of these type of launching games have. With frogs randomly flying all over the place you will be spending a lot of time picking up frogs from the floor and other nearby objects. This problem is made worse by the fact that the game is played as a free-for-all where players can shoot their frogs as fast as they want. Each frog that misses the gameboard can also be shot again. This means players are frantically trying to pick up their frogs when they miss. Players are then forced to waste time picking up the other players’ frogs instead of shooting their own frogs. This is a problem that you find in most of these type of  games and I don’t know how you could avoid it. It is still annoying though.

As far as the components I would say that they are a mixed bag. As I already alluded to, I don’t think the frogs are of that high of quality. I think most of the accuracy issues come from the frogs themselves. Even if the frogs flew more consistently they are pretty basic. Other than the frogs though I actually think the components are pretty solid. The board is solid and sturdy. The little knife blockers are also a nice touch but they likely will get lost pretty quickly.

While I have no evidence to support this I have a feeling that the theme of Flying Kung-Fu Frogs was trying to capitalize on the popularity of a 1990s cartoon franchise. You have amphibian/reptile protagonists that for some reason know martial arts. That sounds a little like the Teenage Mutant Ninja Turtles doesn’t it? Being a huge fan of TMNT when I was young I probably would have loved Flying Kung-Fu Frogs if it was around when I was a child. While TMNT is far from as popular as it once was, the franchise is still going strong so I think Flying Kung-Fu Frogs could have an audience with some children.

Flying Kung-Fu Frogs has its problems but I actually think children could still really enjoy the game. While the game mostly relies on luck it is still fun launching the frogs. I think younger children could have a blast launching the frogs. Children aren’t going to really care that the frogs are wildly inaccurate and that the game mostly relies on luck. While I think there are better launching games that I would recommend instead of Flying Kung-Fu Frogs, if you can find the game for cheap and have younger children I think you could get your moneys worth out of the game.

Should You Buy Flying Kung-Fu Frogs?

Despite liking launching games I have to say that Flying Kung-Fu Frogs is probably one of the worst that I have played. That is disappointing because I actually think the game had potential. I actually really liked that the game has six different platforms which score different amounts of points. This could have added a risk/reward mechanic to a genre that rarely has much strategy. The problem is that the frogs are wildly inaccurate. Unless the frogs that came with my copy were defective there doesn’t appear to be a way to aim them. Usually they either go too far or barely leave the ground so it becomes hard to get them to actually land on any of the platforms. This makes the game rely almost entirely on luck which is kind of frustrating. While it will probably turn off adults I still think young children will enjoy the game.

In general I probably wouldn’t recommend purchasing Flying Kung-Fu Frogs. If you don’t like launching games it is not going to be for you. Even if you like these type of games I still probably wouldn’t recommend it because I have played better launching games. Flying Kiwis in particular is a significantly better game than Flying Kung-Fu Frogs. If you can find the game for really cheap though and have young children who like these type of games I think you could get your moneys worth.

If you would like to purchase Flying Kung-Ku Frogs you can find it online: Amazon