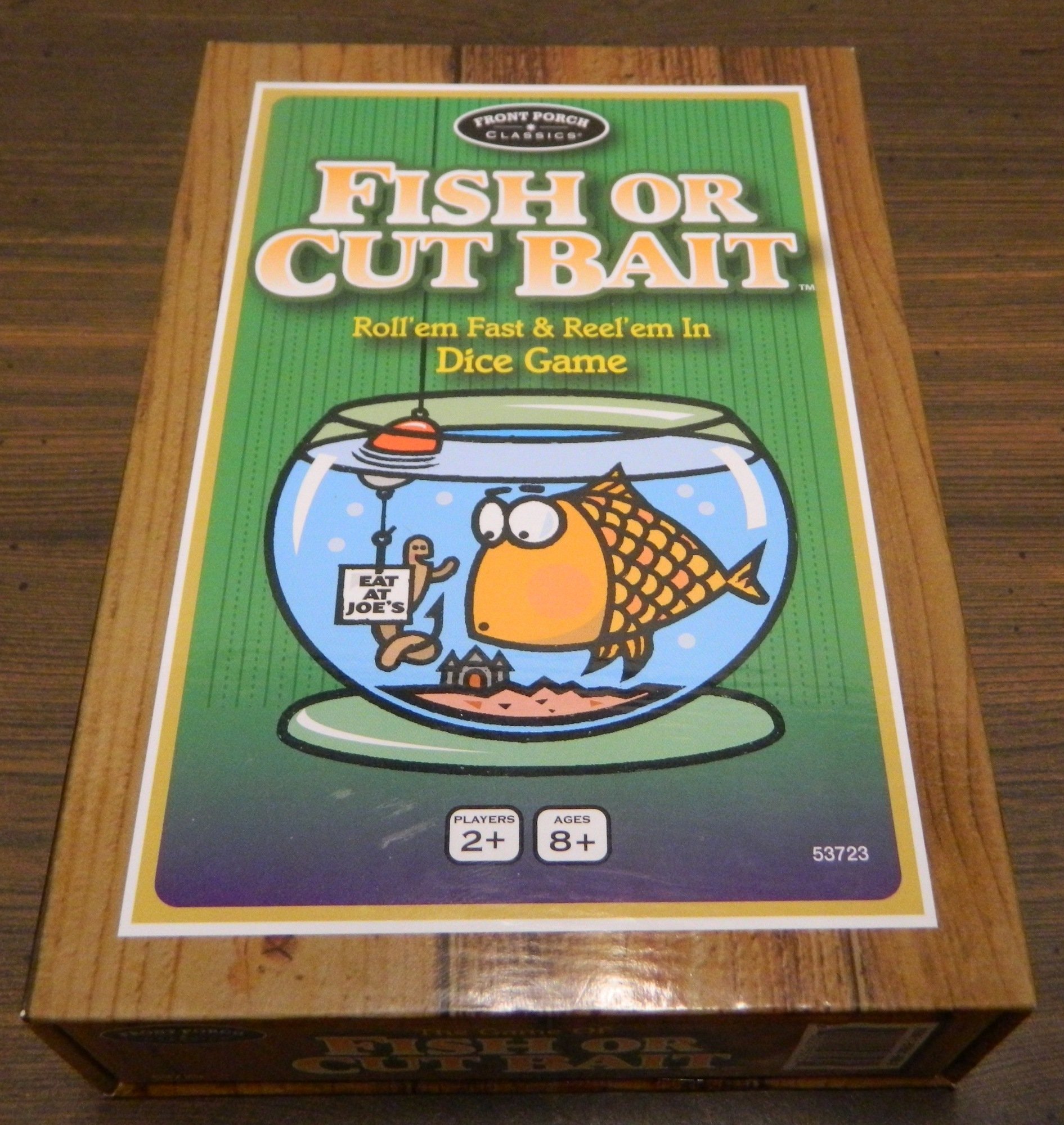 Fish or Cut Bait is one of those games that I would regularly find at thrift stores and rummage sales. As dice games are not my favorite genre and I am not a fisher, I was never really interested in picking up the game. The only reason I eventually decided to pick up the game was because I found it for $0.25-$0.50 at a rummage sale. While I didn’t have high expectations for the game, I am a sucker for cheap games so I decided to pick it up. After reading the rules, I was actually a little curious as the game had some interesting ideas for a speed dice game. Fish or Cut Bait has some interesting ideas, but none of them really work leading to a boring and repetitive dice rolling game.

How to Play Fish or Cut Bait

The game is played in eight rounds. On a player’s turn they will have 45 seconds to score as many points as possible. The player’s turn starts when the timer is flipped over. A player’s turn consists of two phases.

In this phase there are four different unique combinations that the player has to keep an eye out for.

When a player has reached the fishing phase, they will roll the two or three fish dice (depending on what rig they assembled). The numbers next to each fish on the dice represent how many points you will receive if you keep that die. Players can keep rolling the dice until they are either satisfied with their score, or they run out of time. When re-rolling fish dice, they can keep some of their dice and re-roll some of the other dice.

If a player rolls the snag symbol in the fishing phase and doesn’t have the snag-free chip, they must return to the first phase and reassemble their fishing rig.

The player’s turn either ends when the player decides to quit or the timer runs out. The player counts up the points scored on the fish dice and adds the corresponding number to their small box for the current round. The larger box is used to keep a running total. Play then passes to the next player.

The game ends after all of the players have played eight rounds. The player who has scored the most points, wins the game.

My Thoughts on Fish or Cut Bait

Having played over 700 different board games, it is not surprising that I have played quite a few dice rolling games. There are some unique dice rolling games but a large majority of them end up playing pretty much the same. At first I thought Fish or Cut Bait was just going to be another very generic dice rolling game. After I started reading the rules though, the game actually looked kind of interesting. Most speed dice games have players roll the dice over and over again hoping to score the most points. While Fish or Cut Bait still relies on this mechanic, it has a couple other mechanics that were kind of interesting at first glance.

What interested me about Fish or Cut Bait is the fact that each player’s turn consists of two phases. The second phase of your turn is similar to most speed dice games where you just keep rolling the dice until you get what you want. In the first phase though the game adds some risk/reward elements along with some decision making. First you have to decide whether to try and get the snag-free chip. Getting the snag-free chip will take some time but it gives you a pretty big advantage in the game. You also have to decide whether you want to go for the full fishing rig or if you want to save some time and proceed with the partial rig. The reason I thought the first phase could be interesting is that I generally like when games give you choices to make. The more choices a game gives you, the more it feels like you actually have an impact on the outcome of the game.

At first the game looks like it actually does something unique, but after a couple rounds you can tell that is just a facade. Fish or Cut Bait ultimately plays like every other speed dice game. This is due to it only being an illusion that there are decisions to make in the game. The few decisions you get to make in the game are so obvious that they don’t really even feel like decisions.

Lets start with the snag-free chip. Unless you are feeling really lucky, you need to get the snag-free chip if you want any chance of scoring points in a round. Unless you are really lucky or we were very unlucky, you likely won’t get far without the snag-free chip. Each dice only has one snag symbol on it but with the number of dice you will be rolling, you will eventually roll one and have to start again from the beginning. This will usually happen earlier than you would expect. Outside of rare circumstances, you are better off taking the time to get three of the same symbol so you can take the snag-free token. As you can set aside dice, this isn’t that hard and it will help you for the rest of your turn. It is well worth the amount of time you need to spend to acquire it.

The other main decision you have to make in the game is whether to settle for a partial rig or wait for a full fishing rig before you head to the fishing phase of the game. Unless you are almost out of time, you are better off taking the time to get the boat symbol on your last dice. As you can re-roll the dice as fast as you want, if you roll the dice quickly it shouldn’t take too long to get the last symbol you need. Getting the third fish dice will allow you to score quite a few more points. The blue dice is the most valuable dice and having an extra dice gives you more opportunities to score points.

The only decision left in the game is deciding when you should end your turn if the timer doesn’t make the decision for you. This decision basically comes down to how much time you have left and what you have already rolled. That is assuming that you have the snag-free token. If you have already rolled the highest number on a die, there is no point in re-rolling it. If there is still time left and you have rolled one of the lower numbers on a die, there is no reason why you shouldn’t re-roll the die. When you get near the end of your turn, you basically have to decide whether you think you can improve the number on the die before you run out of time.

As the decisions in the game are pretty obvious, each round ends up playing out in almost the exact same way. You begin your turn trying to acquire the snag-free token as quickly as possible. It usually doesn’t take long and it will make the rest of your turn much easier. You then move onto getting a complete fishing rig. As you have the snag-free token, you can keep rolling the dice quite quickly which makes getting one of each symbol pretty easy. After you have acquired the full fishing rig, you have the rest of your turn to roll all three fish dice. When you roll the highest number on a dice, set it aside and focus on the other dice. If you are close to running out of time, you might have to settle for one of the higher numbers on a die. Unless you are really unlucky, following this strategy likely will give you close to the maximum number of points in each round.

Once you start following this process, Fish or Cut Bait gets repetitive pretty quickly. You basically do the same thing every single turn. Thus whoever rolls the best is likely going to win the game. After a couple rounds, the game becomes pretty boring. Fish or Cut Bait is not a terrible game but there are many other dice games that are considerably better. If you want a simple straight forward speed dice game to play with children, you could do worse than Fish or Cut Bait. There are much better speed dice games that I would recommend instead though.

As far as the components are concerned, they are decent but could be better. The dice are wood which is always a plus. The symbols are also engraved which makes them more resistant to wear as the paint won’t wear off as quickly. I do think the game could have used a different symbol for the snag symbol though. It looks too similar to the normal fishing pole symbol which is not a good thing when you are trying to make quick decisions. Other than the dice, the components are pretty average.

Should You Buy Fish or Cut Bait?

At first I didn’t have high expectations for Fish or Cut Bait as it looked like a very generic dice rolling game. After reading the rules though I was slightly encouraged as the game looked like it had some interesting ideas. The two different phases of each player’s turn seemed interesting as players had to make some risk/reward decisions. Unfortunately these decisions are pretty obvious, which leads to a simple strategy that you should just use each turn. This basically leads to Fish or Cut Bait being like every other generic speed dice game. Whoever rolls the best will win the game. This gets repetitive pretty quickly which leads to the game becoming pretty boring.

If you would like to purchase Fish or Cut Bait, you can find it online: Amazon