Each player takes all of the pawns of one color. Shuffle all of the tiles (with the 0 side face up). Choose as many tiles as there are players and the oldest player gets to place them next to each other in whatever order they prefer. The player to the left of the oldest player then takes the first turn.

A player’s turn begins with them flipping over one of the forest tiles. This tile will be placed next to the tiles where the combined total of the numbers on the tiles is highest. For example the space between a tile with a six and a four has a strength of ten. If two areas have the same total, the player who flipped over the tile gets to determine where it gets played. 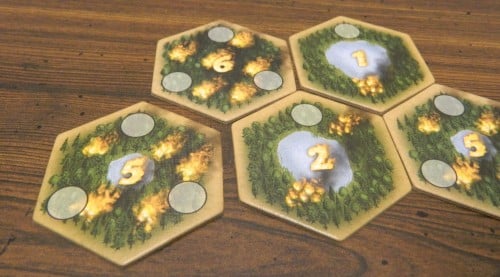 The latest tile to be added is the five tile. The five tile has to be placed between the six and two tile because that is the area where the fire is burning hottest. 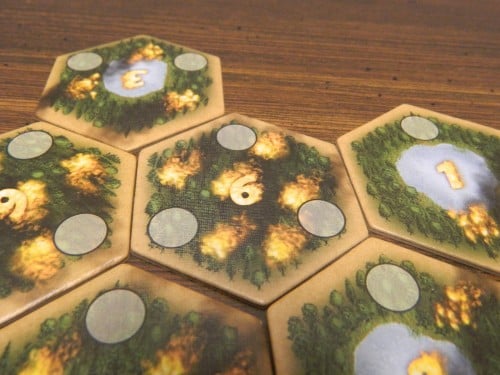 Each players’ score is then calculated. Players score points for each group of connected tiles that a player has played their tokens on. Players can score from several groups of tiles. If a group of tiles has no tile that has a free edge (edge that is not connected to another tile), that group scores no points. If the group of tiles has one or more tiles with a free edge, the player adds up all of the numbers on the tiles in the group and then divides that total by the lowest numbered tile with a free edge. If the total is not a whole number you round down. If a player has multiple groups, each group is scored individually and then added together to form the player’s final score. 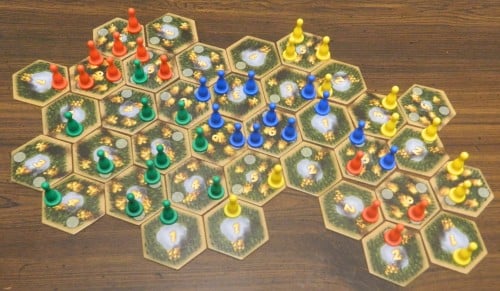 Feurio! is an interesting idea for a game since I have never heard of another board game that focuses on fighting forest fires. While I have never had any interest in being a firefighter, I was still intrigued by the idea. While it doesn’t make a lot of sense for firefighters to be competing against one another (competitive mode), Feurio! otherwise does a good job with the theme.

While I know next to nothing about firefighting, the mechanic of the fire spreading is quite clever. It is a good mechanic since a fire should spread in the direction that the fire is burning hottest. Gameplay wise it is also interesting because it gives the players an opportunity to see where the fire will spread in future turns by analyzing where the fire is currently burning the hottest. Players can see the areas where the fire will likely spread for the next three to four turns as well as being able to see where it will be unlikely to burn.

Basically your strategy in the game should involve getting control of a low value tile on an edge that is near an area that has a lot of high valued tiles. Getting a low valued edge is key to winning the game. Not getting a one or two tile on an edge for your group means that your group won’t be worth that much since dividing the total by three or more is going to kill its’ value. If you can get a low value edge tile and then build off that tile with most of your pawns you have a good chance at winning the game.

The one problem I had with the mechanic is that you really don’t have much control over how the board is built. For the most part players have little to no choice on where they can place their next tile. Usually there will be one to three places where the fire is burning hottest so the player doesn’t have much of a choice. Sometimes it feels like this element of the game plays itself.

There is some luck involved with the tile drawing as well. If high valued tiles are drawn it could help spread the fire in one player’s direction allowing them to expand their group. Players who are lucky enough to form one large group will likely win the game so when this happens it can give one player a big advantage in the game. A player’s group could also abruptly end if some low tiles are put around the edges stopping the fire from moving in that direction. You can plan out your strategy as best as you can but it can be ruined quickly based on the next tile that ends up being drawn.

The one good thing is that the game actually has some variant rules that can have an impact on how tiles are placed. The most interesting variant rule is the firebreak rule. This allows a player to forfeit their ability to play firefighters on their current turn in order to place their tile with the zero side face up. Based on how the fire spreads in the game, this will likely prevent the fire from spreading in one direction. While I have yet to play the game with this variant, I think it is a good idea. Players can use this ability to either stop the fire spreading to areas helping the other players or it could be used to prevent a player from losing their connection to the outer edges.

The game has another variant that fixes another problem with the game. One of the biggest ways luck comes into the game is with the one tiles. Basically if you can get control of a one tile that has a free edge, you have a good chance at winning the game. If you don’t control a one tile with a free edge you don’t have a great chance at winning the game. Getting control of a one tile is so important because not having to divide your total by anything lets you score a lot more points than a player that has to divide theirs by two or more. One of the variants has you remove all of the one tiles from the game or count them as two tiles while scoring. This is another variant that would probably improve the game quite a bit.

Component wise the game is solid. The tiles are pretty thick and the artwork is pretty good. The player pieces could have used some work though. The pieces are just bland plastic pawns that have nothing to do with the theme. I am guessing this was done in order to cut down on the game’s cost. I would have preferred something more related to the theme though.

One thing I have to bring up is that Feurio! was originally a German board game so if you purchase the game the instructions may be entirely in German (like my copy). Mayfair Games released an English version of the game so if you don’t speak German I would look for that version of the game even though it is easy to find the rules online if you can only find the German version of the game. Mayfair Games also re-released the game under the name Ablaze in 2010. I would actually recommend purchasing that version since it plays the same but it includes additional tiles that help supplement the two additional games that you can play with the tiles.

While not the best game I have ever played, Feurio is a pretty fun light to moderate strategy tile placement game. The game is pretty simple as it will take five to ten minutes to explain to new players. The game plays quickly at around 20 minutes. With the short length and light to moderate strategy I think Feurio would work well as a filler game that you either play with non-gamers or as the first or last game of a board game night. The game isn’t a brain burner but it presents enough strategy to keep most people interested. The game does rely on some luck though and I would recommend using some of the variant rules in order to improve some areas of the game.

If you don’t like tile placement/area control games I don’t think you will like Feurio!/Ablaze! If you are looking for a light/moderate tile placement game though I think you will enjoy the game. I would recommend picking up Ablaze! since it seems to be the cheaper option and comes with additional components. If you can find Feurio! cheaper though, I think it is worth picking up.

If you would like to purchase Ablaze!, the Mayfair Games re-release of Feurio!, you can purchase it on Amazon. Ablaze!