Shuffle the treasure tiles and randomly place them on the islands face up based on the number of players: 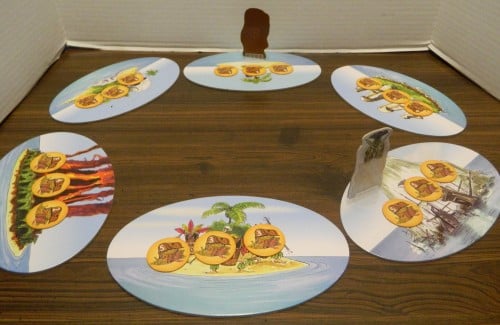 Give each player one set of colored pirate cards. All sets of pirate cards not used are returned to the box.

Choose a player to start by any way chosen by the players.

On a player’s turn they play one of their pirate cards on one of the islands face down. If there is already a face down card on that island that card is turned face up. 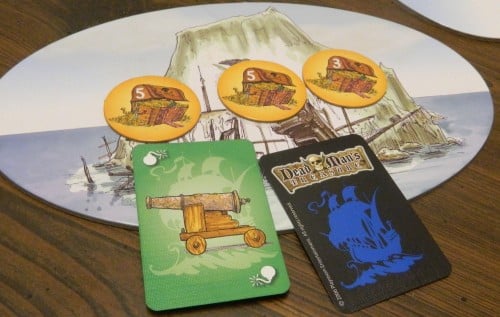 The blue player has played a card on the island. The green card is flipped over and revealed to be a canon. The green and blue card are removed from the island.

Play continues with each player taking turns playing a card to an island until one of the end game conditions are met. The game ends when either all of the players have played all of their cards or the Ben Gunn or Captain Flint pawn return to the island that they started the game on.

All of the treasure that is on the island occupied by Captain Flint is discarded. No player will score points from that island. 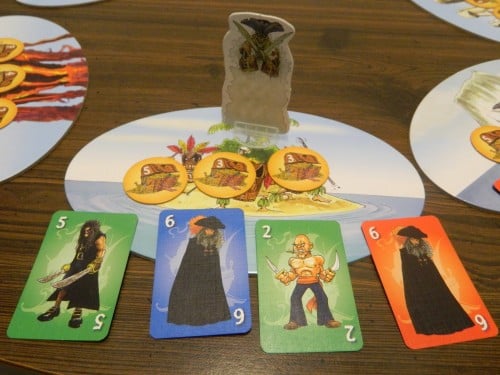 Captain Flint ended up on this island. This island scores no points for any of the players. 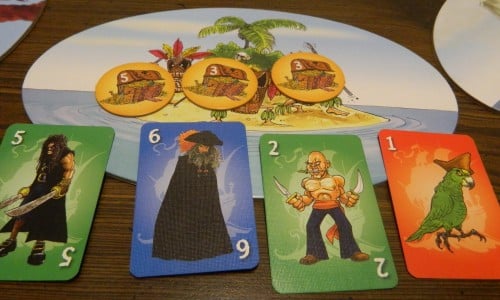 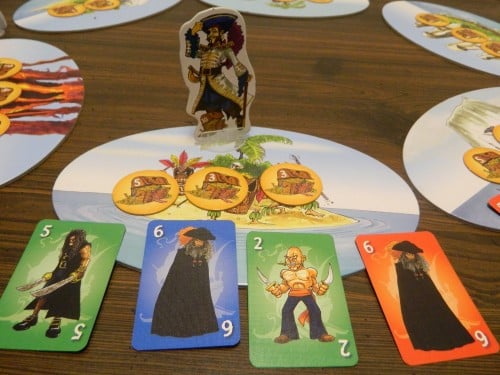 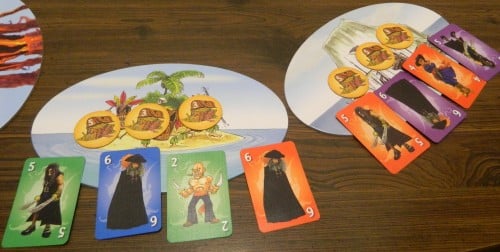 After all of the islands have been scored, players count up the values of their treasures. Whoever has the most valuable treasures wins the game. 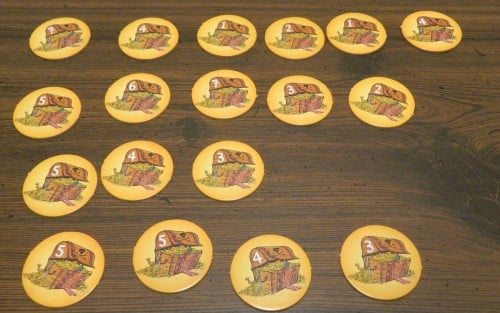 Over the years I have played so many Reiner Knizia games that I have gotten quite familiar with what to expect out of a game made by him. Generally I like his games. They aren’t always my favorite games but you can usually expect to get at least a very solid light to moderate strategy game. Dead Man’s Treasure is such a Reiner Knizia game that if I had played the game without knowing who the designer was my first guess without a doubt would have been Reiner Knizia.

Like with most Reiner Knizia games, Dead Man’s Treasure is a light to moderate strategy game. The game is easy to learn and might seem simple at first but it still has more strategy than you would expect. I like this level of strategy in games since they are accessible enough for children and non-gamers but have enough strategy to keep gamers interested since the game doesn’t rely entirely on luck.

The main mechanic in Dead Man’s Treasure is a semi-blind bidding mechanic. In the game players play cards to the different islands in order to try and get the highest total so they can claim the highest valued treasure. I call it a semi-blind bidding game since when you first play cards to an island players won’t know what card you have played. When more cards are played to the island though, previously played cards are revealed so the player who played the most recent card will know their true standing on the island while the other players need to guess the value of the last card played.

The bidding mechanic is interesting because each island is not winner take all. Unless only one player plays cards to an island, the player who has the highest total will not take all of the treasure. They will only take the highest treasure and any remaining treasure. This means that the distribution of the treasures on an island can be quite important. If an island has two five treasures and a four treasure there isn’t a lot of motivation to have the highest total if three people bid on the island. The top player will get the same number of points as the second player and only one more point than the third place player. In this situation you really only need to be one of the three highest players in order to get close to an equal value as the other players. On the other hand an island that has a seven treasure and two one treasures has a significant advantage of getting first on it since you will get a lot more points than the other players. Generally it is probably best to use your most valuable cards to claim islands with a huge difference between the most valuable treasure and the other treasures.

A twist to this bidding is the presence of the two pirates. Where the two pirates are located at the end of the game can have a big impact on who will win the game. Ben Gunn is really valuable and you want him to land on an island that you control. Captain Flint on the other hand can ruin your entire strategy. The final locations of the two pirates are likely to have an impact on who ultimately wins the game. The pirates are interesting because you might have to play a card to an island that you otherwise wouldn’t have played on just to move them to another island.

They also can have a big impact on how long the game lasts since if they are regularly moved a game can end quite quickly before all of the players have been able to play all of their cards. The first game that I played lasted until all of the players had played all of their cards. The second game ended quite abruptly when one of the pirates returned to the island they started the game on. You really need to pay attention to how fast they are moving around the board because you might have to drastically change your strategy if it looks like the game is going to end early.

The final twist for the bidding is the presence of the cannon. The cannon can be a very valuable card if played on the right island at the right time. Since the cannon discards the next card played on the island, players are never sure that they are safe to play one of their valuable cards on a island with a face down card. Losing one of your valuable cards to a cannon has a good chance of losing you the game. The cannons can be pretty weak though if they only take out a weak card or one of your own cards. If a player is sneaky though and plays the card in a way to trick a player into playing one of their high valued cards on it, you can do a lot of damage to that player.

The biggest problem with the game is that you can’t really control your fate that much in the game. You can come up with a good strategy but because of luck or because of the other player’s moves it can be ruined due to no fault of your own. It is too hard to predict what is going to happen in the game. You don’t know what the other players are going to do so you really can’t plan out what is going to happen in the game. Towards the end of the game you can see a little more of what is going to end up happening but you still are never sure since one move by another player can move one of the pirates and ruin your whole strategy. This ultimately means luck will likely have an impact on who wins. If you don’t mind just playing a game and seeing who ends up winning this isn’t much of an issue. If you like to micromanage every part of the game to improve your chances of winning this might be a turnoff for you since your fate in the game is pretty reliant on the other players in the game.

Adding to this are the tiebreaking rules which I don’t really like. While you can slightly plan ahead for the tiebreakers, there is too much to factor in especially since you won’t be sure where Captain Flint will end up so you don’t know where the scorekeeping will start. The tiebreaking system seems to give unfair advantages to some players. In one game a player was in three ties and they lost all three tiebreakers. I think the game could have used a better tiebreaking system. Maybe the player who first played a card to the island should break the tie since it would reward a player from committing to an island earlier.

I also felt that the game is kind of on the short side. The game has an estimated playtime of 20 minutes but I think that is a little high. I would say that the game is closer to 15 minutes long. Being short is not necessarily a bad thing. Each game feels more like a round than a game though. I think the game would be better if a couple games/rounds were played and the player with the highest score after all of the rounds would be the winner. I think this would be a better rule since it would let bad luck balance out a little more so skill/strategy would have a little more impact on who wins the game. You could easily add this rule to the game so it really isn’t that much of an issue.

If you are looking for a good theme, Dead Man’s Treasure isn’t going to give it to you. Dead Man’s Treasure uses one of the most popular board game themes, pirates. I like a good pirate theme but there are so many pirate themed games that it is hard to stand out with regards to theme unless you do something new with it. Dead Man’s Treasure’s theme feels kind of pasted on. Reiner Knizia makes good board games but I have never found his games to have particularly good themes. Most of his games feel like the gameplay was designed first and a theme was then chosen to fit the gameplay. This is actually how I prefer games to be made since I find the gameplay more important than the theme. This means though that Reiner Knizia’s themes are generally pretty average and rarely are a reason to buy his games. This is the case with Dead Man’s Treasure as well. The theme is not bad or distracting but isn’t a good enough reason to buy the game even if you like pirates.

The game’s components are pretty good for such a cheap game. The cardboard used in the game is quite thick. The card quality is pretty good. Despite finding the theme to be very average, the artwork is quite good in my opinion. The artwork is colorful and well done. The artwork might make the game look like it is mostly for children, but is still very nice.

I would say that Dead Man’s Treasure is a good but not great Reiner Knizia game. I had fun with the game and I like that the game has some strategy while still being accessible for children and non-gamers. The bidding mechanics are pretty interesting and give you some interesting decisions deciding which islands you want to pursue. At times it feels like you don’t have a lot of control over your fate in the game though and the theme is also kind of thin.

Wikipedia The Game Board Game Review and Rules