In recent years “Fake News” has become one of the biggest hot topics in the world. From people purposefully making up fake stories and portraying them as real to people dismissing true stories as fake when they don’t agree with them. With how popular the phrase has become it is no surprise that a number of board game publishers tried to capitalize on the term to make a quick buck. Today I am looking at one of those games Fake News or Not?. I normally wouldn’t have much interest in this type of game, but I found it at a rummage sale/thrift store for less than a $1 and I am a sucker for a good deal. Despite its name trying to capitalize on a current hot topic, Fake News or Not? turns out to be just another generic trivia game about weird facts and stories.

How to Play Fake News or Not?

Each round begins with the news anchor drawing the top trivia card. At the top of each card is the beginning of a story. Following this is four conclusions to the story. Three of these are false while one of them is true. The true response is in either the first or last position and has a colored background.

The news anchor should read the card to familiarize themselves with it. They will then choose one of the three false statements to be the one that they will read to the players along with the true statement. The player will then read out the story including both the correct and incorrect statement. A letter will be given to each response based on what is written on the card. 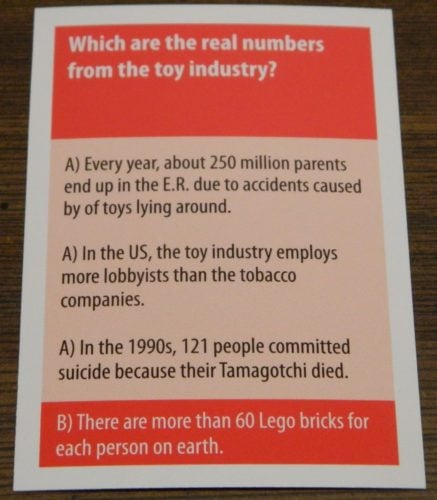 All of the other players will then decide which of the two statements they think is true. They will place the corresponding answer card face down on the table. Once all of the players have made their choice each player will reveal their vote. The news anchor will then reveal which statement was true.

Based on how players voted points will be rewarded as follows: 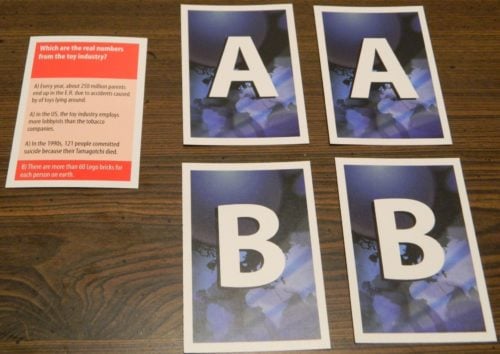 The players have voted for the card. The two that voted B were correct so they both receive a point. The two players that voted A were wrong so the news anchor will score two points.

The scores will be written down and the next round will be played with the next player becoming the news anchor.

When all of the agreed upon rounds have been played the game ends. The player who scored the most points wins the game.

My Thoughts on Fake News or Not?

Before getting into my thoughts on the game I would like to quickly address the game’s title. With a name like Fake News or Not? you would assume that the game deals with the current political climate but it doesn’t. In fact it has nothing to do with politics. Maybe there are a couple cards that have stories dealing with politics, but that is it. Unlike games like Fake News / Real News: Washington Edition which was based around current events, Fake News or Not? very likely chose the name to try and sell more copies.

If this sounds familiar it should as the premise is very similar to pretty much every other trivia game that has ever been created. Instead of answering questions about basic facts you instead are trying to decipher what story is actually true. Being a fan of learning about weird fact and stories this was actually pretty intriguing. The knowledge you will learn in the game is not particularly useful, but it is still kind of fun. As a matter of fact I was actually familiar with a couple of the stories that came up in the game.

Other than the topic of the questions the other thing about Fake News or Not? which was kind of unique was the fact that the reader actually had a choice of which answers to present to the other players. You obviously have to give the correct answer, but you also get to choose which wrong answer you want to use. This adds kind of an interesting twist to the game. With some cards it doesn’t really matter which answer you choose (more on this later), but in others it could actually make a pretty big difference. When choosing an answer the reader has to find the one that they think will fool most of the other players. This relies on being able to read the others players to determine what they will think. If news anchor chooses the right answer they can truly make it a a 50/50 decisions for the other players. This will likely earn you a couple points which can be the difference between winning and losing. This takes some skill and is likely to give some of the players an advantage in the game.

This mechanic actually showed a lot of promise. The problem is that it is kind of ruined by the cards themselves. Simply put some of the cards are better than others. What I mean by this is that some cards are considerably easier than others. For some of the cards it is pretty obvious what the correct answer is. This is partially because it makes a lot of sense, but it also has to deal with the card not having any good fake answers. There are a number of cards in the game where you have no chance of convincing the players of one of the fake answers. This is disappointing because some cards are really good where it is very hard to tell which is the correct answer.

Outside of somewhat ruining Fake News or Not?’s one unique mechanic, this adds far too much luck into the game. Being able to determine fact from fiction will help you. Even if you get every single answer correct though you could theoretically not win the game. This is because in many cases you actually score more points from getting players to guess the wrong answer when you are the news anchor. This makes what card you end up drawing really important in the game. If you draw a good card you will likely score a couple of points. If you draw a bad card you are unlikely to score any points while all of the other players score a point. Therefore the cards you end up drawing could have a pretty big impact on how well you do in the game.

Other than the reliance on luck I also kind of wish the game had some more options when guessing. I don’t know how this would have worked with the other mechanics, but two possible answers is not enough. You are basically guaranteed a 50/50 chance of guessing right even if you have no idea what the true answer is. Due to this in most cases the majority or players will guess the right answer. The scoring would have had to be tweaked in some way, but having three or four answers would likely have been more challenging. Guessing between two different answers is just not that satisfying.

As for the game’s difficulty it is really simple. The only reason that the game has a 12+ age recommendation is likely due to the subject matter of some of the cards. While playing I didn’t find any objectionable cards, but I am guessing that there are a few that may be a little questionable for younger children. The game itself is really simple to the point where you can probably teach it within a minute or two. As for the length I actually found it to be a little too short. This somewhat depends on the number of players as with more players the game is considerably longer. Unless you are playing with a number of players towards the top of the limit though two rounds is not enough. With just four players you could probably finish the game within around 15 minutes. Basically I would recommend adding at least another round or two if you are playing with less than six players.

Fake News or Not?’s components are kind of disappointing. The game basically just comes with cards. The cards are nothing special as the artwork is pretty basic. The game comes with 200 double sided question cards which means that you can play 400 rounds before getting a repeat. This is not terrible. Based on the premise of the game you likely won’t be able to reuse the cards unless you wait a long time before using the cards for a second time. This is because the stories are the type of things that you likely won’t forget right away which means you likely will remember most of the answers if you play the game a second time. The first edition also doesn’t feature any way of tracking your score so you need to use paper to keep track of each player’s score. The second edition of the game does include a gameboard and pawns to keep track of players’ scores. While this might not be a problem for everyone, but the game’s box is way larger than it needed to be. The box is mostly empty where you could have cut it down to a fraction of its size and still had no problems fitting all of the components.

Should You Buy Fake News of Not?

Ultimately Fake News or Not? is basically the definition of a very generic trivia game. Basing the game around weird trivia and stories was an interesting idea and one of the game’s greatest strengths. You probably won’t get much useful information out of playing the game, but you should get some enjoyment out of some of the truly weird true stories that are featured in it. I also thought the idea of the reader getting the opportunity to choose which answer to use to try and trick the other players was interesting. The problem is that the difficulty of the cards can vary significantly. Some are really easy where the reader doesn’t have much of a chance to fool the other players while others can be really hard. This adds a lot of luck to the game where the card you draw can have a big impact. I am also not a huge fan of having only two answers for each card as you can do really well in the game just by getting lucky.