Each player takes a miner and a digging tool. All of the gameboard pieces are placed into their correct spaces on the gameboard. The scale and fort are assembled. All of the gold pieces are placed in the fort. Each player in turn places their miner and mining tool on one side of the scale and places gold pieces on the other side of the scale. When the two sides balance, the player takes the gold from the scale for their starting gold.

To begin a players’ turn they roll both dice. The player moves around the board in a clockwise fashion the number of spaces rolled. A special action is then taken based on what space is landed on. 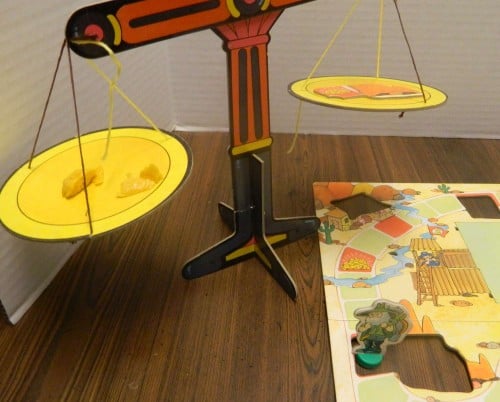 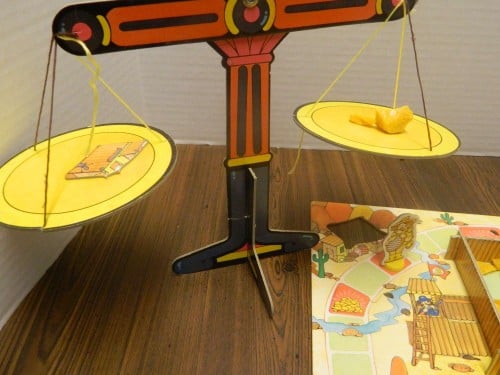 In this picture the player has landed on the general store. The player places the general store on one side of the scale and pieces of gold from their own pile on the other side. When the two sides balance, the gold on the scale is placed into the fort. 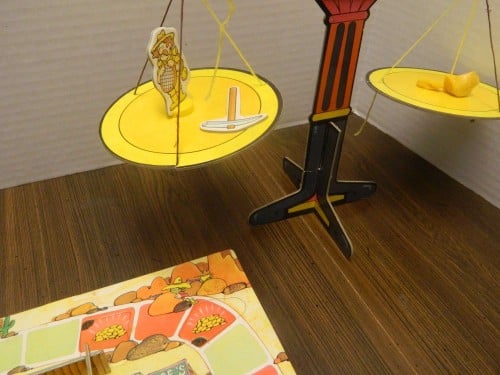 Landing on a Space Occupied by Another Player

If a player lands on a space occupied by another player, they get to steal gold from that player. The player who first occupied the space places their miner and their mining tool on the scale and pays the gold (from their own gold) that balances the scale to the player who landed on the space. If two miners occupy a space that a third player lands on, the other two players will both have to pay the third player who landed on the space. After being paid by the other player(s), the player will take the associated action for the space they landed on. 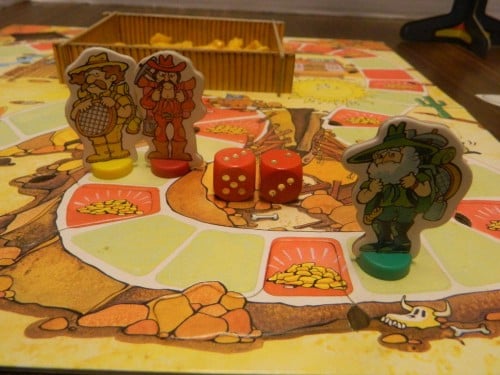 The game ends when all of the gold is removed from the fort. Players compare the weight of their piles of gold to determine whose is the heaviest. Whoever has the most gold (by weight) is the winner of the game.

It’s 1849 San Francisco in the heart of the gold rush. You are a prospector trying to make it rich by finding as much gold as you can. You won’t be able to keep all of that gold though. Some of that gold will need to be spent on supplies. Bandits and even the other players may also steal some of your hard earned gold.

Despite being a children’s game I was interested in playing Eldorado for two reasons. First I liked the theme. While not the most original theme, the gold rush is a good setting for a board game. Eldorado does a pretty good job with the theme. While it doesn’t play a big role in the gameplay the theme is better than a lot of children’s game themes which feel tacked on. The artwork is a little childish but is still done pretty well.

The other reason I was interested in the game was because I thought the mechanics related to the scale would be interesting. Unfortunately Eldorado didn’t do so well with the gameplay. Eldorado is essentially a roll and move game. Outside of rolling the dice, your actions have no impact on the game. You roll the dice and take the associated action for the space you landed on. There is no strategy and no decision making. Being a kids’ game I knew the game was going to be simple but I was not expecting this simple.

The scale/weighing mechanics could have saved the game but they feel like a waste of time. They add a little to the theme of the game but that is it. This mechanic is wasted since there is no skill involved. You just place gold on the scale until the gold weighs too much and the last piece placed is removed.

The mechanic is boring since there is no suspense involved. The game could have very easily added a risk/reward system to the game. In situations where a player either got gold or took gold from other players, the game should not have guaranteed the player any gold. The players should have had to earn their gold. Players should have had to try to guess the right amount of gold without going over. You should have been able to decide whether to add more gold to the scale taking the risk that the gold side of the scale would get too heavy and be dragged down. If this happened, you would lose all of the gold from the scale. I think this would have been a good addition to the rules since it wouldn’t have made the game much more difficult and it would have added some strategy to the game.

While the basic gameplay mechanics are not that great, the game could have been somewhat saved if the scale worked well. At least with my copy of the game, the scale works poorly. It is highly inaccurate. The only differences the scale can detect is when one side is significantly heavier than the other side. Otherwise the scale just sits in the position where it was originally placed. The inaccuracy of the scale ruins the game. You have no idea when there is enough gold on the scale so you essentially either have to guess or you have to wait until the gold side is much heavier than the other side. The weighing mechanic could have been interesting but it was ruined by the inaccurate scale.

Eldorado had an interesting theme and the unique weighing mechanic could have been interesting. Eldorado ends up being a bad/boring roll and move game. The weighing mechanic has no strategy or decision making at all. The scale is also wildly inaccurate which makes this part of the game pretty pointless. The only people I could see having any fun playing this game are young children and possibly adults playing the game with young children. Otherwise I would stay away from Eldorado.

My kids LOVED this game!! And they played a LOT!! The scale was fun and educational, teaching them how to weigh items and balance the scale!! For an adult, I guess it is overly simple and not a “strategy” game. But for young kids, learning how to follow rules, move the count of the dice, and then follow the instructions and maybe even get to weigh some gold.... or STEAL gold from someone else, it is a LOT of fun!! I gave our game to one of my grandkids, and am looking to purchase another for my youngest grandchild....