How to Play Doodle Quest

A round begins with the top quest card being placed in the middle of the table so everyone can see it. Read the directions on the card to see what the objective is for the card. The legend on the card will indicate how players earn and lose points. 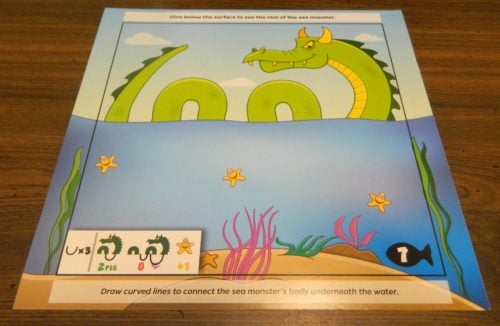 For this card the players will draw three lines. The goal is to try and connect the sections of the monster together underneath the water.

Players study the card and then try to draw what is required on their transparent doodle sheet. When drawing on the sheet a couple rules have to be followed: 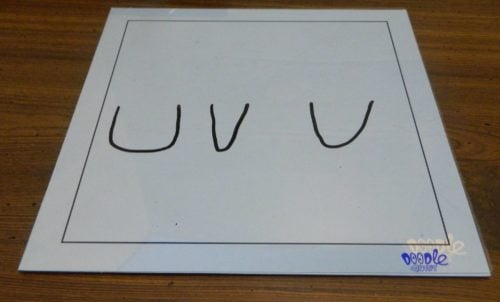 This player has drawn their three lines for the card.

Once everyone has finished drawing, players take turns scoring. The quest card is placed underneath the doodle sheet. To determine how many points a player has scored you refer to the legend on the card. In addition to the quest on the card, players will score one point for each starfish their drawing touches even if they otherwise wouldn’t score any points. Players write down their score on the corresponding section of the scoresheet. 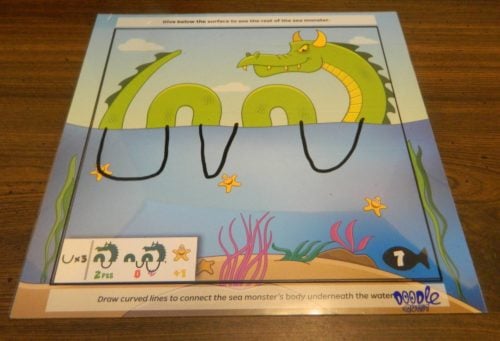 Once everyone has finished scoring, the doodle sheets are erased. The next round starts with the next quest card being placed in the middle of the table.

The game ends when all six rounds have been played. The player who scores the most points wins the game.

My Thoughts on Doodle Quest

When I first saw Doodle Quest it immediately reminded me of Captain Clueless: Lost in the Caribbean. After playing Doodle Quest though I have to say that while the two games share things in common, they do play quite a bit differently. While Captain Clueless focuses more on guiding your blindfolded partner, Doodle Quest focuses on your spatial awareness skills.

Just like Captain Clueless though, Doodle Quest is a highly original game. I always love it when I find games like this as it is so refreshing playing a board game that does something new for once. Basically the gameplay revolves around looking at a picture and then trying to draw lines and shapes to complete the card’s quest. The gameplay mostly revolves around players trying to look at the picture and project it onto their own blank sheet so they can draw the desired path/shape. This sounds like a really simple gameplay mechanic but it is surprisingly fun. As the mechanic relies pretty heavily on spatial awareness skills though some players are going to be terrible at the game while others will be really good. The thing with Doodle Quest is that even if you are terrible at the game you can still have a lot of fun.

I think this comes from the fact that the game finds the perfect balance between being accessible and challenging. Family games generally have to tow the line between being simple enough for younger children to understand while also being challenging enough to be engaging for older children and adults. Doodle Quest does a great job balancing between these two goals. Doodle Quest is really simple to pick up and play since all you do is look at a picture and then try to draw on your own board to complete the objective. With how simple the game is most adults will probably think that it is going to be childish. That is far from true though.

The game may be easy to learn and understand, but that doesn’t mean that it is not hard to do well in the game. Doodle Quest is legitimately a game that children can beat their parents in without the parents having to take it easy on them. Even in situations where younger children struggle, the game includes both an advanced and basic mode so younger children can play with the easier challenges which should keep the game competitive. Most players should be able to do decent on the cards but without a lot of practice few players will be able to perfect a card.

Doodle Quest even ups the challenge if players want to try to maximize their points in a round. Most of the cards include starfishes which are counted as bonus points if you draw your line over them. These bonus points are quite tempting in the game as a point here or there can make all the difference in who ultimately wins the game. Doodle Quest does a great job balancing the reward with risk though. Getting the extra points is nice but you are going to have to take a risk since most of the starfish are near dangerous sections of the card. I think this risk/reward element really adds another layer to Doodle Quest.

As far as the quests are concerned, they share things in common but at the same time offer different challenges. Most of the quests either have the players drawing lines or fish (using the stencil). Despite all of the cards having you doing similar things, each one feels unique. I give the designers credit for coming up with so many ways to utilize the same basic mechanics. While some of them are going to be better than others, you should enjoy them all. I do question the scoring of some of the quests though. One of the advanced quests is basically an all or nothing proposition. Other quests give you a lot more points than other quests.

While Doodle Quest is a great game, it does have a couple issues preventing it from being perfect.

One problem with Doodle Quest is that it basically requires players to take turns drawing. While the game recommends that all of the players draw at the same time, in action this doesn’t work as well as you would expect. If all of the players can sit on the same side of the card it could somewhat work. The players who have a direct line of sight to the picture though will have an advantage so I would recommend that players that are the best at the game sit on the edges so they have to see the picture at an angle. If you are playing the game in an area where everyone can’t sit on the same side, it is really hard for everyone to draw at the same time. Unless you want to make players play “expert mode” it is not fair forcing a player to have to draw while they are looking at the picture upside down. While it extends the length of the game, I personally would recommend just letting each player turn the picture so they can look at it normally while they are drawing. Having to wait around for the other players hurts the game but it is the only way that none of the players are disadvantaged.

The second problem that I had with the game actually comes from the components. For the most part I really like the components. The components are of a pretty high quality and I love that the game uses erasable markers with transparent sheets so players can keep reusing the components. The artwork is gauged more towards children but is still well done. I mainly had two problems with the components. First the dry erase markers tend to dry out quicker than you would expect. You likely will have to purchase replacement markers at some point.

The other problem that I had with the components is that I wish there were more quest cards included in the game. The game only includes 18 cards. The cards are doubled sided but unless you want to play both the advanced and basic games you can only play three games before you have to repeat cards. The quests are fun enough that I have no problem repeating them but at some point it is going to get kind of repetitive doing the same challenges over and over again. While Doodle Quest has enough quest cards, it would have been even better if it included more.

This is one of the reasons that I am really interested in trying out the 2015 game Loony Quest. While not an official sequel/expansion, Loony Quest was designed by the same designers (Laurent Escoffier and David Franck) and actually features the same type of gameplay. I have never played Loony Quest but I think Loony Quest might be even better than Doodle Quest. It seems to have taken the basic mechanics from Doodle Quest and expanded on them. Loony Quest even has an expansion which will give you even more challenges. If you already have Loony Quest and really enjoy it I would recommend taking a look at Doodle Quest and vice versa.

Should You Buy Doodle Quest?

Doodle Quest may not be for everyone but it is a game that everyone can enjoy. What is so great about the game is that it takes such a simple concept and makes such a compelling game out of it. I have played a couple games that are somewhat similar but I have never played a game quite like Doodle Quest. The game can be learned in minutes and is simple enough that even young children should be able to play the game with no troubles. Despite being so simple to play, it is more challenging than you would expect. With the beginner and advanced sides to the cards, the game can easily be played by adults and younger children with both having an equal chance of winning the game. Doodle Quest is not perfect as there are some small issues here and there. The biggest issues are that I wish there were more quest cards and it is not a game that you are going to want to play all of the time. Doodle Quest is still a great game though that the whole family can enjoy.

While I liked Doodle Quest, if the premise doesn’t really appeal to you I don’t think it is going to be the game for you. If the premise sounds interesting to you and you want a game that the whole family will enjoy I think you will enjoy Doodle Quest and would recommend picking it up.

If you would like to purchase Doodle Quest you can find it online: Amazon