Recently I have been taking a look at some of the old Disneyland/Disney World games that were released back in the 1950s/1960s and were reprinted later in the 2000s/2010s. So far I have looked at the Adventureland and Fantasyland games. Today I am looking at the Disneyland Monorail game which was originally released back in 1960. Based on my experiences with the two previous games in the series, I can’t say that I had high expectations for the game. The Disneyland Monorail game has some charm which may appeal to children and adults with nostalgia for the game, but otherwise is a very generic roll and move game.

How to Play Disneyland Monorail Game

On a player’s turn they will roll both dice. 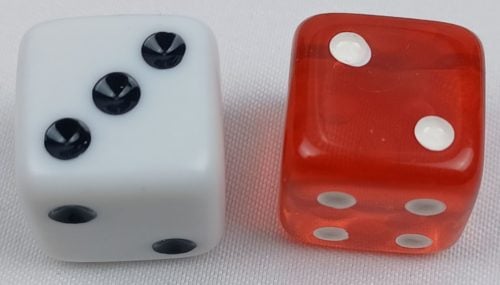 The current player has rolled the two dice. They rolled a three on the white die and a two on the red die.

First they will move their playing piece forward the number of spaces on the white die. If a player should land on the same space as another player, they will move back until they land on an unoccupied space. 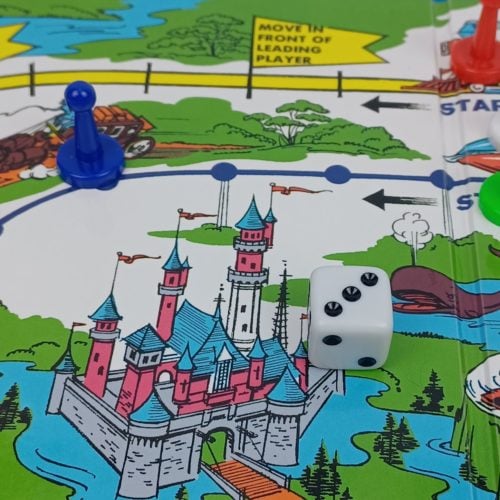 The blue player rolled a three on the white die. They will move their pawn forward three spaces.

The player will then move Casey Jr. the number of spaces on the colored die. Casey Jr. will keep moving around the track until the end game is triggered. 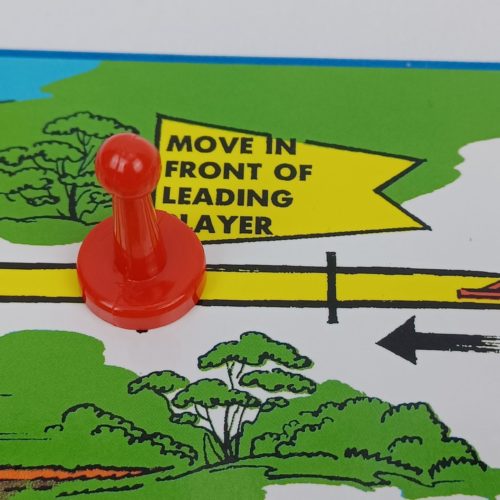 A two was rolled on the red die so the red pawn was moved forward two spaces on the outer track.

If Casey Jr. lands on a space with a flag on it, the player will follow the instructions on the flag utilizing their own playing piece. 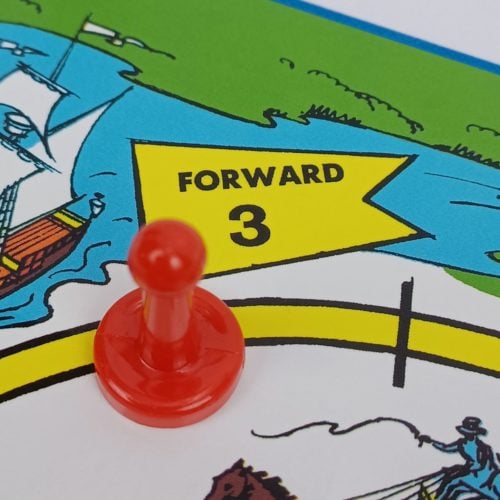 The Casey Jr. pawn has been moved to a space that says “Forward 3”. The current player will move their pawn forward three spaces.

After a player has used both dice, their turn ends and play moves to the next player clockwise.

Once at least one of the players land on a red space, the end game is triggered. 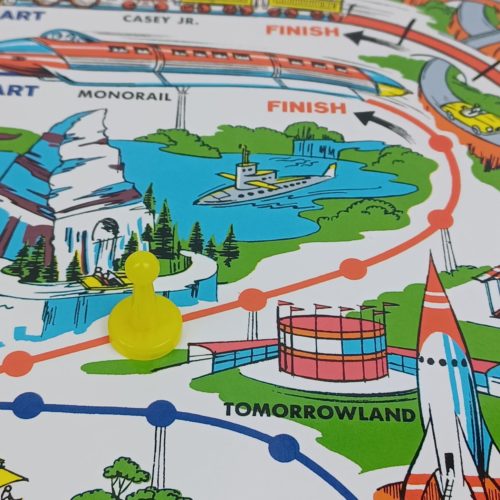 The yellow player has reached one of the red spaces so they have triggered the end game.

Players will still move normally. Players must reach the finish space by exact count though. If your roll would put you past the finish space, you will not move on your turn. 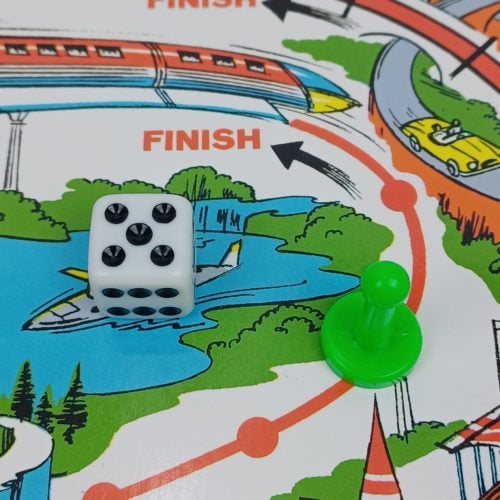 The green player’s roll would put them past the finish space. They will not move their piece this turn.

The first player to reach the finish space by exact count wins the game. 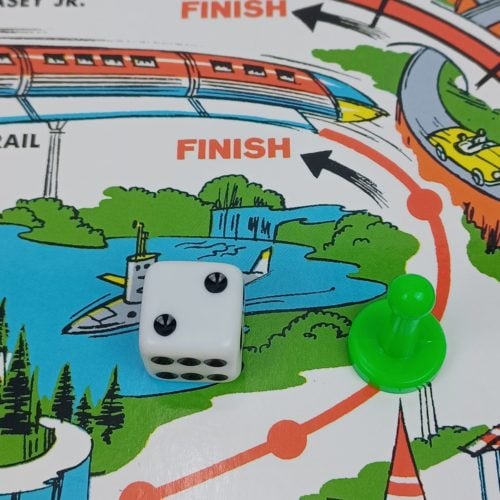 If Casey Jr should stop on the outer track’s finish space by exact count, the game ends. If this happens on the same turn that the current player also reaches the finish, the current player wins. Otherwise Casey Jr. will win the game. 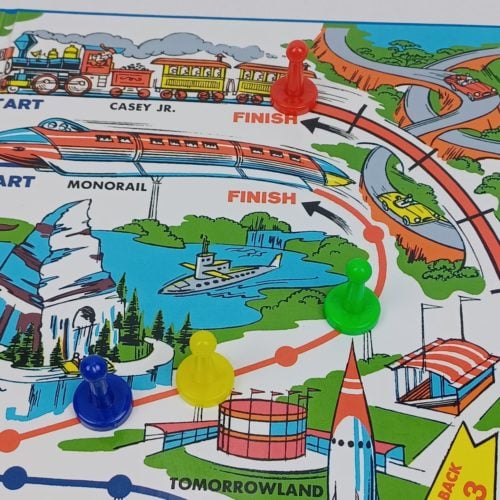 The Casey Jr. pawn has reached the finish space by exact count. As at least one of the players have reached the red spaces on the main track, Casey Jr. has won the game.

My Thoughts on Disneyland Monorail Game

To its very core the Disneyland Monorail Game is a very basic roll and move game. You roll the dice and try to reach the finish before the other players. Outside of rolling the dice and moving your playing piece the corresponding number of spaces, there isn’t much else to the gameplay. Whoever rolls the most high numbers and then the right number at the end will win the game. Basically if you have ever played a roll and move game before you should already have a good idea of what to expect from the Disneyland Monorail Game.

The game only offers one unique mechanic that I haven’t seen all that often especially for a game as old as the Disneyland Monorail Game. I have to admit that I was a little surprised that the game has a NPC player that none of the players directly control. Along with rolling a die for yourself, you will also roll a die to move Casey Jr. around the outside track. Casey Jr. will move around the track several times as the players move through the inside track. Once one of the players reach one of the last spaces though, Casey Jr. has a chance of reaching the finish first. If Casey Jr. actually beats all of the other players to the finish, it wins and all of the other players lose.

While the option for none of the players winning a game is far more common today, this was a pretty rare mechanic for a game released in the 1960s. In addition to racing against the other players, you are also racing against the game itself. This brings some tension to the game as you could be close to winning the game and then Casey Jr. sweeps in and steals it away from you. Casey Jr. will move around the board several times and is of no real concern until the very end of the game. While I haven’t seen Casey Jr. win the game yet, this added dimension does add a little something to your typical roll and move game. It might suck losing to the game itself due to a die roll, but it helps make the game a little more interesting.

It should not come as much of a surprise to anyone that the Disneyland Monorail Game was designed to be really easy to play. The game has a recommended age of 6+, but I think it could be played by children even younger with basic reading and counting skills. Basically all you do in the game is roll the dice, move your piece, and possibly read the text written on a space that Casey Jr. lands on. You could teach the game to most new players within a minute or two.

With how simple the game is, it is no surprise that the game also plays rather quickly. The length will somewhat depend on how long it takes someone to roll the exact number they need at the end of the game, but the game is quite short as the board itself isn’t that long. I would guess most people could complete a game within 15 minutes. The short length does help the experience as the game would have really started to drag if it was much longer.

Basically the Disneyland Monorail Game is about what you would expect it to be. The game had two target audiences in mind when it was created and reprinted. The game was originally made as a game that parents could play with younger children due to its simple and quick gameplay. I think the game will work well with younger children that are also fans of the theme parks. The other target audience is fans of the Disney Parks or those who actually have nostalgia for the game from their childhood. While the theming isn’t perfect, the game has a sort of charm that will likely appeal to a fan of the parks.

Outside of those two audiences though, I don’t think the Disneyland Monorail Game has a lot to offer. The game is better than the Fantasyland game, but not by much. The game just feels like your generic roll and move game with a slight twist that you get to compete against Casey Jr. The only control you have over your fate in the game is dependent on what numbers you end up rolling. Roll well and you have a good chance of winning. If you roll poorly you are basically guaranteed to lose the game. This ultimately leads to a pretty boring game. The game really doesn’t offer you much more than any other roll and move game. Ultimately older children and most adults will find the game to be kind of boring.

The other issue I had with the game had to deal with its use of the theme. The game uses the theme well in some areas, but it is not utilized as well as it could have been. The gameplay has little to do with the parks or monorails. The gameplay basically revolves around racing against the other players’ monorails as well as Casey Jr. In a way the gameplay feels like it was taken from another game and the Disneyland theme was applied to sell more copies. The game board’s artwork is pretty nice as it features various landmarks from Disneyland. The artwork has a sort of charm to it that I think fans of the parks will like. I found it really disappointing though that the playing pieces are the most generic type of pieces that could have been picked. I don’t know why the game couldn’t have at least included playing pieces that looked like actual monorails. Instead it just looks like it took playing pieces from another board game.

Should You Buy Disneyland Monorail Game?

After the other two Disneyland games that I have played recently, I can’t say that I had high expectations for the Disneyland Monorail Game. While better than the Fantasyland game, the Disneyland Monorail Game is not much better. The game has some redeeming qualities. It is easy to play and plays rather quickly. Adding a NPC player in a game that was originally created in 1960 was before its time as well. Young children and fans of the parks may enjoy the Disneyland Monorail Game. The main problem is that it is basically your typical roll and move game. Players basically just take turns rolling the dice and moving their piece around the board. This leads to a game that is kind of boring and relies almost entirely on luck. The game does a good job utilizing the theme in some areas, but it could have done a better job in other areas.

My recommendations for the Disneyland Monorail Game depends on if you have younger children to play with or if you are big fans of the parks/have nostalgia for the game. If either describe you it may be worth checking out the Disneyland Monorail Game. Otherwise I would probably say to stay away from the game as it is just another generic and kind of boring roll and move game.