Shuffle the cards and deal six cards to each player. The game is intended to be played in pairs (partners should sit across from one another) but there are rules for individual play at the end of the “How to Play” section.

During a player’s turn they can do one of the following:

In the game there are a couple different type of cards.

Mine Cards ($ in the corners): Playing a mine card opens up a mine for the team that plays the card.

Ore Cards (money bag(s) in the corners): Playing an ore card adds value to a mine. If the first ore card played on a mine has two money bags, all ore cards played afterwards are also worth two money bags.

Closed Mine Card (Green “X” in corners): Playing a closed mine card closes the mine. No other cards may be played on the mine and whoever controls the mine gets to set the cards aside to be counted for scoring when the round is over. 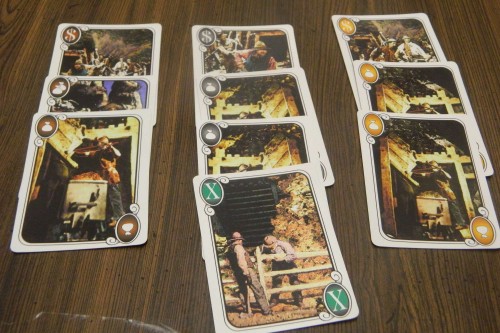 The picture shows three mines. The mine to the left is a copper mine. The mine was started with a two ore bag so the second ore card played is also worth two ore. The middle mine is a silver mine. Two ore cards were added to the mine before it was closed. The mine would be worth four points to the team that had control of the mine. The final mine is a gold mine with two ore cards played on it.

Bandit Cards (red numbered cards): Bandit cards allow players to steal/defend mines. A player may decide to try and steal a mine from the other team by playing a bandit card against it. Only one mine can be fought over at a time. Each bandit card is worth the number printed on the card. Every player has an opportunity to play a bandit card on their turn but they don’t have to. When play returns to the player who started the fight, the battle is resolved (before they take that turn). Whichever team has the highest value combined wins control over the mine. If the challenging team wins they take the mine and place it in their group of mines. If a team successfully defends the mine, that team gets to keep it in front of them. If there is a draw the original owners keep the mine. All bandit cards that were played are discarded. 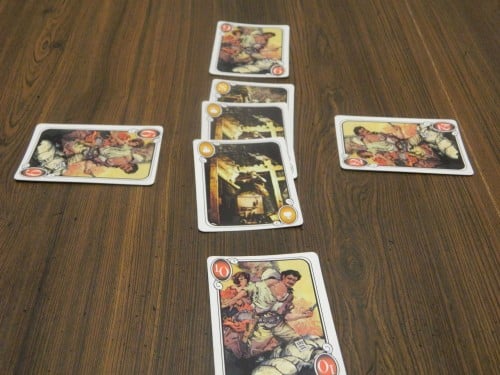 While a mine is being contested, the team currently controlling the mine may play a closed mine card to end the battle and keep control of the mine. The mine is closed and put to the side for scoring. An additional rule that was not included in the original English rules, makes the team closing the mine during a fight have to discard the last ore card played on the mine in order to close it.

When the last card is drawn from the deck, each player gets one more turn. Scoring then takes place. Teams receive three points for every gold ore card, two for every silver ore card, and one for every bronze ore card. If a double ore card was the first card played on a mine all of the ore cards are worth twice as many points. If not played as the first card, the double ore card is still worth twice its’ normal value. If neither team reached 60 points another hand is played. Whoever first reaches 60 points or has the most points if both teams reach 60 points, wins the game.

In the individual game there are a couple different rules. Since there are no partners, players can no longer pass cards. Also whoever plays the highest bandit card during a fight gets to claim the mine.

Reiner Knizia has been involved in the development of hundreds of games during his career. We here at Geeky Hobbies have looked at quite a few of his games. This review is of his first published game (Board Game Geek), Digging. The game is also known under the name Desperados for more recent printings. While not Reiner Knizia’s best game, Digging is still an above average card game.

Digging is a pretty traditional card game. You and most likely a partner are trying to build up groups of cards while trying to prevent the other pair from doing the same. Digging is not a particularly deep game but it is quite accessible. The game generally takes a couple minutes to learn and maybe 10-15 minutes to complete a hand. It is hard to explain but Digging is just a fun game to play.

While Digging can be played individually, I think the game wouldn’t be nearly as enjoyable as it is playing in pairs. Playing the game individually will work mechanically but a lot of the enjoyment in the game comes from trying to form a strategy with your partner without being able to discuss it. If you play the game individually you will know all of the cards you can play and there is not as much strategy to playing your cards as there is in a partner game.

I had a lot of fun playing Digging, but I still wish it had a few more mechanics. The game really doesn’t have a whole lot to it. You pretty much play mines, add ore cards to mines, steal or protect mines, and finally close mines. The game is really simplistic which makes is quick and easy to play but at times it can also feel kind of shallow.

The lack of mechanics also makes the game rely quite a bit on luck. No matter how strategic you are, if you don’t have the right cards you can’t win. You could end up getting a lot of ore bags but have no mines to play them on. You could get a bunch of mines but if you have no ore cards you can’t score any points. Finally you can have a lot of mines and ore cards but if you have no cards to close the mines, they will just sit out there to either be taken by the other players or to be lost at the end of the game since you couldn’t close them. Unfortunately the lack of strategy/reliance on luck keeps Digging from being a great game.

Digging’s biggest problem is that the game does not have enough cards. The game comes with 60 cards but that is far too few in my opinion.  Digging had the potential for a decent amount of strategy if you play in pairs. The problem is that you go through the cards so quickly that you are never able to implement much of a strategy. You can never implement a long term strategy since the game will end before you can finish it. The game could have been more strategic and tense if the cards lasted long enough for players to actually build up a mine with a lot of ore cards. Instead you need to close mines before you want to in order to guarantee that they get closed in time so you can still bank the points. To somewhat offset this problem, if I ever find another copy of the game for cheap I am going to pick it up in order to increase the size of the deck.

Other than not having enough cards I actually liked the components of the game. I thought the artwork on the cards was well done even though there could have been a little more variety. The only complaint I have with the cards is that I thought the copper and gold colors looked a little too similar and some players may have some trouble distinguishing the two.

One final issue I had with Digging was a rule that was omitted from the English version of the rules. As mentioned in the “How to Play” section the English rules impose no penalty when a team closes their mine during a fight. The problem with this rule is that the team whose mine is being attacked will usually close the mine if they feel at all threatened that they will lose the mine. Therefore challenging a mine using the English rules is pretty pointless.

The original German version of the game actually had a rule in place to stop this situation from occurring. In the German rules if a team closed their own mine during an attack, they would be able to close the mine but they would have to discard the last card played to it. I have played the game with both rules and the German rule is much better. When we started playing with the German rule, players were a lot less likely to close mines when being attacked since they didn’t want to lose one of the ore cards. I just don’t know why this rule never made it into the English version of the game. Maybe it was left out by mistake or maybe the creators for some reason didn’t think Americans could understand the simple rule. If you play the game you must play it with the additional German rule.

Digging is an interesting game. While the game doesn’t have a lot of strategy and relies too heavily on luck, I still really liked the game. Digging is just a fun game to play and it is very accessible. You will want to play the game in pairs though since the individual game is likely to be considerably worse than the pair game.