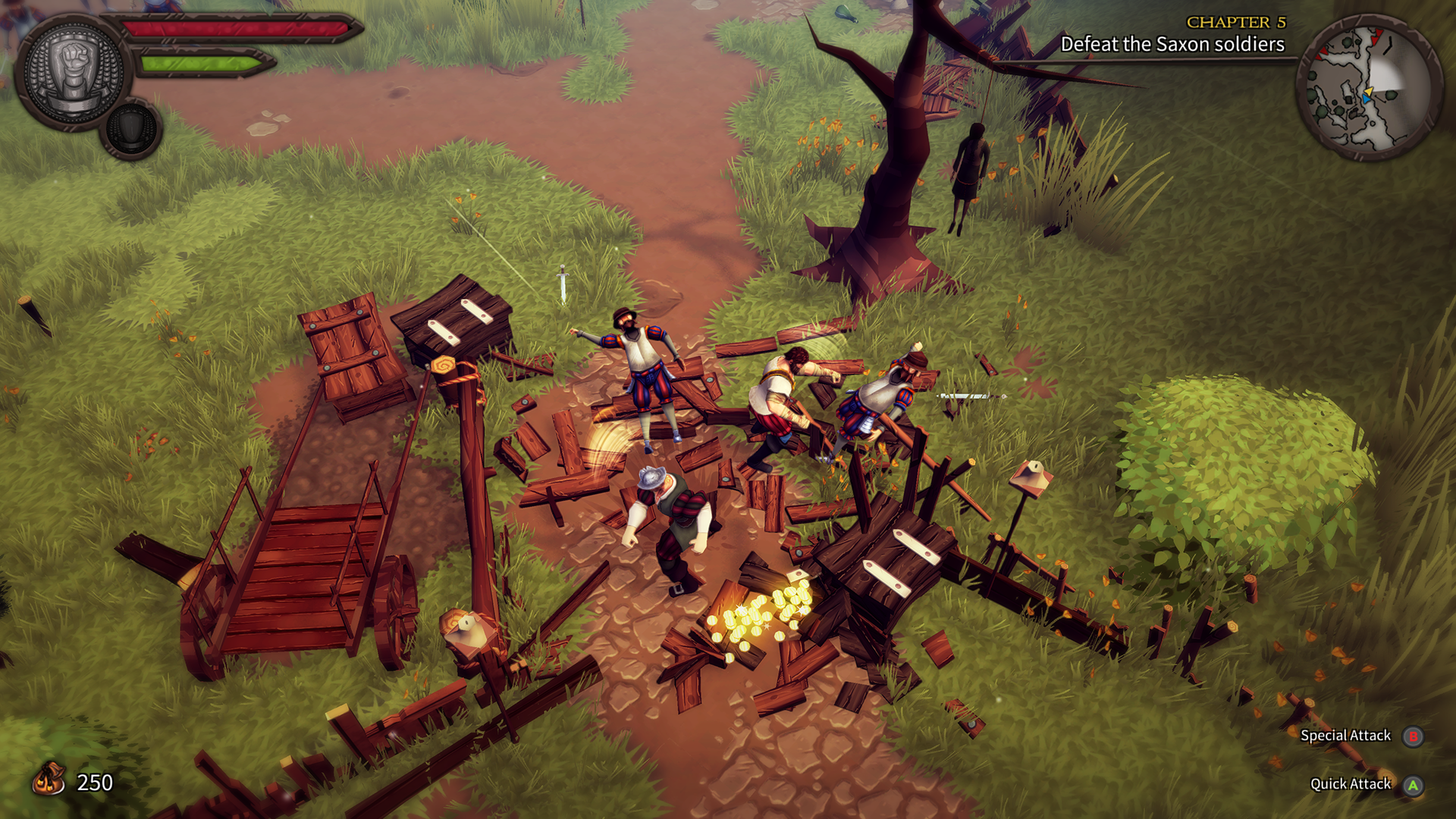 Cross of the Dutchman is a 2015 indie beat ’em up/hack ‘n slash created by Triangle Studios. While there is nothing significantly wrong with the game, Cross of the Dutchman lacks variety and any distinguishing features that make it anything more than a very average game.

The Tale of Pier Gerlofs Donia

Cross of the Dutchman tells of story of Pier Gerlofs Donia. The story takes place in 16th century Frisia (modern day Netherlands). Pier’s homeland is being invaded by the Saxons. As the Saxons begin encroaching on his and his neighbors lands, Pier decides that enough is enough and that he needs to fight back to protect his homeland. Pier’s journey takes him to the neighboring towns and farms as he tries to recruit his neighbors to help fight back against the Saxons.

While I enjoy history, I have to admit that I know next to nothing about Frisian/Netherlands history so I can’t verify how accurate the game is with regards to the history presented in the game. Just by playing the game and looking at the work that the developers put into trying to make it historically accurate, I would guess that the game is as close as it could be to being historically accurate. Obviously some areas were stretched to fit the story like the fact that you can kill 100’s of armed soldiers with your bare fists.

As far as my thoughts on the story/setting,I found it to be kind of hit and miss. I really like the idea behind the game. Too many games take us to the same settings time after time that it is refreshing that the Cross of the Dutchman tries to do something new for once. As I have already said I know next to nothing about Frisian history so it was nice to learn something new. The main storyline in the game is not bad. The game has some clunky dialog though. Also bBesides the main character, none of the characters are particularly memorable since I could barely tell any of them apart by the end of the game.

If I had to use one word to describe Cross of the Dutchman it would have to be the word average. There is nothing terribly wrong with the game but there is also nothing great or special about the game either.

Cross of the Dutchman is a beat ’em up/hack ‘n slash game. Essentially you go around killing enemies with either your bare fists or with your sword which you get later in the game. The combat in the game is pretty simple. You just run around punching/stabbing your enemies. One button performs your normal attack which usually kills an enemy within a couple hits. You also have a special ability that uses a stamina bar that kills all of the enemies within range with one hit. Throughout the game you can buy different special abilities that differ in range and strength.

Basically combat breaks down into the following. Gather up a lot of troops into a small area and use you special ability to kill a lot of them. Sometimes you can kill ten or more enemies with one special ability. If most of the troops were killed you can then finish the rest off with your normal attack. Otherwise since there is no dodging or blocking in the game if you are low on health you need to just run around waiting for your health and/or stamina to recharge.

While the combat is fun for a time it quickly becomes a button mashing affair where you just keep pressing the attack button with a special attack thrown in every so often. At times the combat is kind of clunky since it is hard to line up your character to successfully hit the enemies. You will end up swinging at air quite often. That isn’t a big deal though because the combat is really easy. I think I might have died two or three times in the entire game from combat.

Every so often you will encounter a “stealth mission”. You could debate whether they are really stealth missions since you don’t have to be particularly stealthy in order to complete them. While it is kind of hard to know where the guards can actually see, essentially if you aren’t right in front of them you will probably be fine. I didn’t particularly like the stealth sections because they don’t make a lot of sense. If you are caught during a stealth mission it is an automatic game over. This is kind of foolish since after completing the stealth missions you usually end up beating up all of the guards you just snuck past anyway. Due to this fact I don’t even know why there are stealth missions in the game. It would have been easier to just kill all of the enemies in open combat.

This is pretty much what playing Cross of the Dutchman feels like. You will be told to go somewhere and fight some enemies. Then you need to go somewhere else to kill some enemies. You then might be told to go back to the first place to kill some additional enemies. With only a couple different locations you end up doing a lot of backtracking in the game. Within all this combat is some story, gold hoarding, visits to the shops, and the aforementioned stealth missions. While the last couple of missions are kind of interesting as you try to save your homeland, the midway point of the game gets a little dull since the game just feels like a long fetch quest where you act as everyone’s errand boy.

I ended up completing the entire game in around three hours. The game lacks any side missions so you are essentially moving from one story mission to the next. Since the combat is quite easy you can breeze through the story missions pretty quickly. If I would have found all of the treasure chests a little more time would have been added to the game but it wasn’t worth it in my opinion. Even achievement hunters probably won’t get a lot more playtime out of their first playthrough since I got 27 of the 31 achievements without putting any effort into getting them. Unless you decide to replay the game you aren’t going to get much more than four or maybe five hours out of the game.

Should You Buy Cross Of the Dutchman?

The simple answer would be that it depends.

Being a simple beat ’em up/hack ‘n slash game, if you don’t particularly enjoy the genre I don’t see any reason why you would enjoy Cross of the Dutchman.

Now for fans of beat ’em ups, the decision is a lot murkier. There is nothing particularly wrong with Cross of the Dutchman and I had some fun with it. The setting/story is also interesting. The game doesn’t do anything special though. The combat is kind of bland and the game feels like a long fetch quest. The game is also easy and short at only around three hours long.

At a retail price of $9 I don’t think it is worth full price unless you are a big fan of the setting or beat ’em ups. I wouldn’t totally disregard the game though since it is not bad. It just lacks variety and anything particularly original. I had fun with the game and don’t regret playing it. I personally would recommend waiting for a sale if the game’s concept interests you.

Cross Of The Dutchman