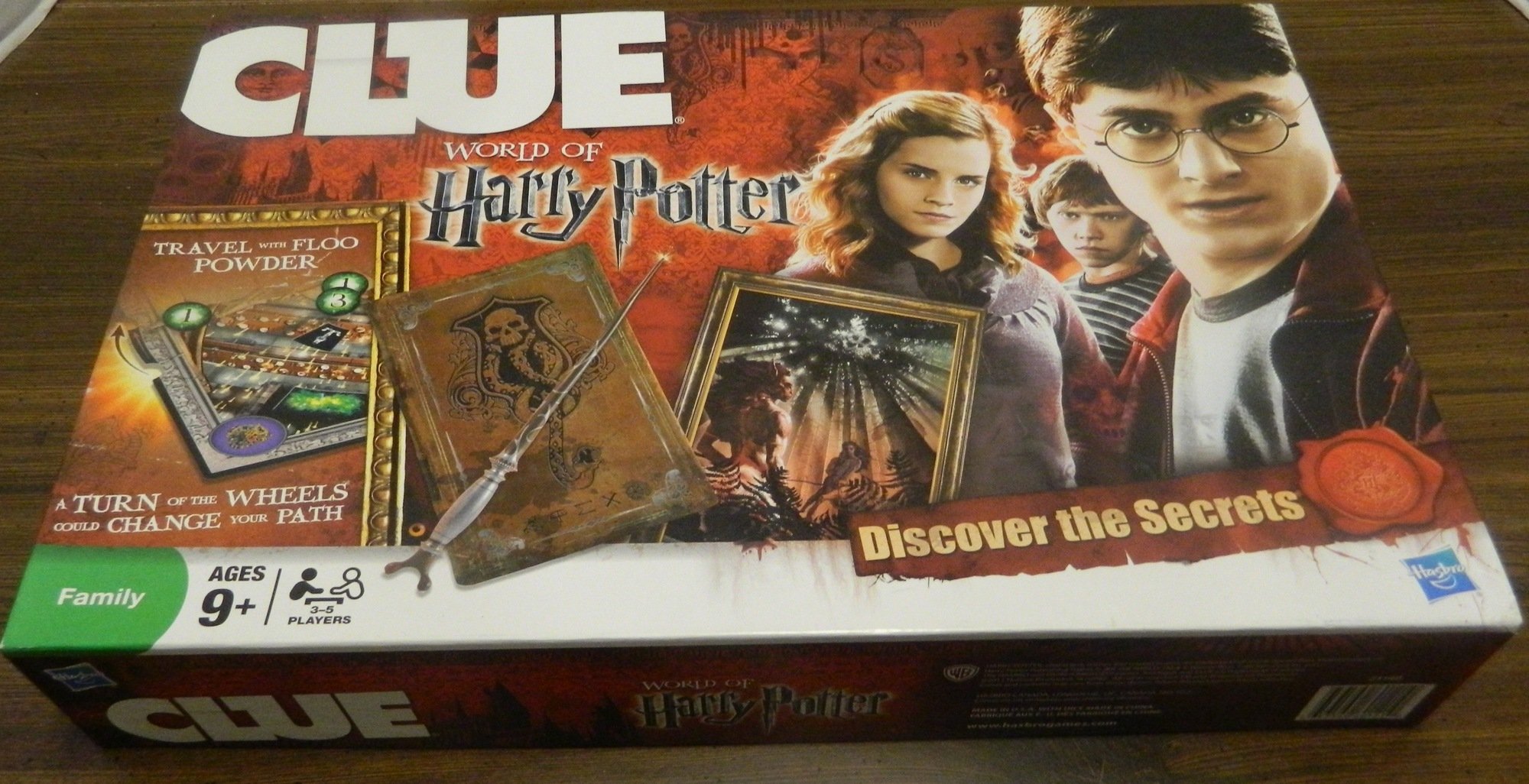 When most people think of the deduction genre the first game that comes to their mind is Clue. Clue is just one of those classic games that everyone has played at some point in their lives. I would say that I don’t love or hate Clue since it deserves credit for basically creating the deduction genre but at the same time has some faults that have been fixed by more recent board games. Being a fan of Harry Potter and enjoying an occasional game of Clue, I was interested in finding out if Clue World of Harry Potter was just a re-themed Clue or if it actually brought something new to the game. For the most part Clue World of Harry Potter plays like normal Clue but the game adds some interesting mechanics that both improve and hurt Clue.

How to Play Clue World of Harry Potter

Turn the four wheels on the gameboard so each one shows “start”. Separate the dark deck and help cards and shuffle each deck. Each player takes:

Before the players choose a character, one of the identity cards are chosen at random as the character that has been kidnapped.

Separate the mystery cards into three piles based on their type. Randomly take one card from each pile without looking and place them inside the secret envelope. The rest of the mystery cards are shuffled together and are dealt out to the players. If there are more cards than can evenly be split between all of the players, all extra cards are placed face up on The Burrow space. Players mark off the cards they were dealt and any cards that were placed in The Burrow since those cards cannot be inside the envelope.

The player who has the next birthday gets to play first.

A player begins their turn by rolling both dice.

After using the black die, the player will move their playing piece. The player can either use the number they rolled or they can use one floo powder to teleport to any lit fireplace.

When moving the following rules must be followed:

When a player is forced to draw a dark mark card, they will read the card and do as it says.

Each dark mark card has sections indicating who is affected, how much floo powder is lost and how a player can protect themselves from the card. For every player that the card effects they either need to protect themselves or they will lose the corresponding amount of floo powder. In order to protect yourself the player needs to have one of the help cards listed on the dark mark card. If they have one of the associated help cards, the player avoids the punishment and keeps their help card. If they don’t have an appropriate help card, the player loses the corresponding amount of floo powder.

Making An Accusation and Winning the Game

When a player reaches The Burrow they reveal the suspect, item and location they suspect for the crime. The player then looks at the cards in the envelope without letting the other players see the cards. If the player was correct they reveal the cards and they win the game. If they were wrong they put the cards back in the envelop and they are eliminated from the game. This player can’t win the game but still has to give cards to the other players when they have a card that matches a suggestion.

My Thoughts on Clue World of Harry Potter

Being part of the Clue family, it should come as no surprise that Clue World of Harry Potter borrows heavily from the original Clue. Basically all of the main mechanics are exactly the same as the original Clue. You move around the board stopping in rooms to ask questions to the other players. Eventually one player wins the game when they figure out the three cards that are hidden in the clue envelope. Due to the fact that pretty much everyone has played Clue at some point in their lives I am not really going to address my thoughts on Clue itself since you probably already have your own opinion of the game. If you really want my thoughts on Clue you could also check out my review of Clue Master Detective. So instead of wasting time talking about normal Clue I am going to talk about what is new/different in Clue World of Harry Potter. While none of the new mechanics drastically change the core gameplay, I was actually a little surprised by how much new stuff was added to Clue World of Harry Potter.

Lets start with possibly the most noticeable difference, the transforming board. This mechanic was probably my second favorite addition to the game. Basically when you roll the dice you likely will have to turn one of the four wheels underneath the board which impacts the layout of the board. By turning the wheels you will open and close some doors and also turn on/off fireplaces. While I will get to the fireplaces shortly, I like the idea of changing up the board from time to time. While you have no control over how the board changes it makes the game feel fresh. It might be frustrating having a door slam shut in your face but I liked the mechanic since it adds a little variety to a game that otherwise just has you moving from room to room.

My favorite addition to Clue World of Harry Potter is the idea of the floo powder though. Basically the floo powder is a way to balance out some of the die roll luck. If you roll poorly you can decide to just use some floo powder to teleport to a room that has a lit fireplace. While this might seem overpowered, the game does a decent job of mitigating it by having some of the fireplaces go out (when the board changes) which limits which rooms that a player can move to. The game also gives each player a limited amount of floo powder so you need to choose the best times to use it or you will quickly run out of it. One of the things that I have never liked about Clue is the dice rolling. I have never been a fan of the dice rolling in Clue since it just adds unnecessary luck to a game that should mostly be about figuring out the mystery. While the floo powder doesn’t totally eliminate the dice roll luck, it does reduce it a little.

The final major addition to Clue World Harry Potter is the addition of help and dark mark cards. While the designers were trying to use the help and dark mark card to add some variety to the game, I think they just add more luck to the game. Basically the purpose of the help cards is to avoid the penalties of a dark mark card. Outside of choosing to land on a help space instead of entering a room there is really no strategy in acquiring help cards. Which help card you get is completely random and you have no control over what help cards you will need. Basically you are relying on luck to draw help cards that will actually help you.

The dark mark cards have no less luck involved with them. Basically you will be forced to draw a dark mark card if you roll the symbol on the die or if the dark mark symbol is revealed when you turn one of the wheels on the gameboard. You have no control over either of these happening so you need to just hope that you don’t have to draw dark cards. Once the dark mark card is reveled there is also a luck component where the card either won’t impact you or you have the appropriate help card. Based on my experience this doesn’t happen often. The punishment for not being able to avoid a dark mark card is losing some of your floo powder which puts you at a disadvantage over the other players. While I can see what the game was trying to do with the help and dark mark cards, they feel like a waste of time since all they do is add luck to the game.

As far as components I was pretty disappointed with Clue World of Harry Potter. I will admit that the game does a pretty good job utilizing the Harry Potter license. The artwork is pretty good. The gameboard is pretty nice and the changing rooms mechanic actually work pretty well. The problem with the components though is that they are kind of bland. The game uses pretty thin cardboard for a lot of pieces and the game has some of the thinnest cardstock that I have seen in a long time. Add in that the clue sheets are pretty small and I think the game could have done more with the components.

While this is probably pretty obvious, Clue World of Harry Potter was a game made for fans of the series and they will be the people who enjoy the game most. As I have already mentioned, the game does a pretty good job with the Harry Potter license. The game does a good job utilizing the franchise to tweak the basic version of Clue. Fans of Harry Potter should enjoy the game if they like Clue. The problem is that I don’t see the game really appealing to people that don’t really care about Harry Potter. These players will have trouble saying some of the words/names in the game and just won’t get anything out of the game other than it being just another Clue game.

Should You Buy Clue World of Harry Potter?

Clue World of Harry Potter is an interesting game. While the game shares a lot in common with normal Clue, the game actually added more mechanics than I was expecting. For the most part I enjoyed the changing gameboard and floo powder mechanics because they change up the gameplay and in some ways remove some luck from the game. On the other hand I really didn’t like the addition of the dark mark and help cards since they just add more luck to the game. Being a game made for fans of Harry Potter it is not a surprise that the game will mostly appeal to fans of the series.

If you would like to purchase Clue World of Harry Potter you can find it online: Amazon