In the past I have played hundreds of different board games. After playing so many different games you learn pretty quickly which genres you like and which you don’t really care for. One of my favorite genres are speed games while the memory genre is one of my least favorite. With today’s game being a mixture of these two genres I didn’t know how Bugs & Co was going turn out. While Bugs & Co is a solid game, it ends up being kind of boring at the same time.

How to Play Bugs & Co

Based on the number of players, the following number of monster and trophy tiles are used in the game.

Shuffle all of the monster tiles face down and randomly remove seven of the tiles without looking at them. Place the trophies in the center of the table. One player counts down from three and all of the players begin playing at the same time.

In Bugs & Co all of the players play at the same time. Each player will use their dominant hand to pick up tiles and their other hand to hold tiles that they have chosen to keep. Once the round has begun players start grabbing tiles and looking at them. If the player would like to keep the tile they move it to their other hand. Once a tile has been moved to a player’s non-dominant hand, the player can’t get rid of it or look at it for the rest of the game. 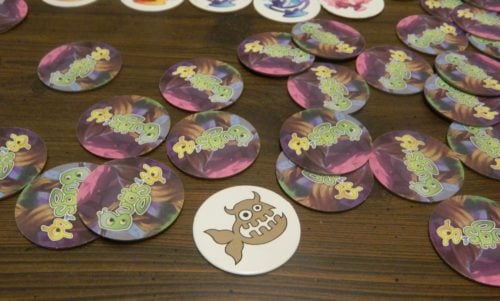 One of the players has flipped over the face up tile. They can either pick up the tile or turn it face down.

If the player does not want to keep the tile they put it back onto the table face down. While looking at tiles the player can group the same tiles together on the table but other players can take the tiles and move them to somewhere else on the table.

If a player thinks they have scored enough points they grab the highest valued trophy left on the table. Once a player grabs a trophy that player cannot grab any more tiles. Once the last trophy has been grabbed, the player without a trophy gets ten seconds to grab additional tiles. 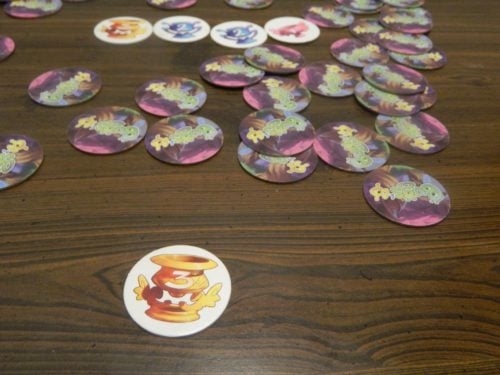 This player has chosen to take a trophy. Once they have taken a trophy they can no longer take any more tiles.

Once the game ends the players turn over all of the tiles in their non-dominant hand and group them based on creatures that look the same (color does not matter). Players will score three points for each group of three identical creatures collected. Players will lose one point for every monster not part of a group of three. Players will also score the number of points printed on the trophies they grabbed during the game. 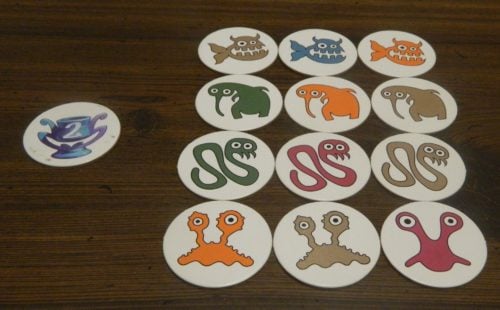 This person has found three pairs of creatures which will score them nine points. They also took a trophy worth two points. The player ended up taking three tiles that didn’t create a group so they will lose three points. This player would score a total of eight points.

The player with the most points wins the game.

My Thoughts on Bugs & Co

As I have already pointed out Bugs & Co is basically what you would get if you combined a speed game with a memory game. The basic goal of the game is to find three of the same creature which will score you points. Some of the creatures are missing though so players have to be careful before taking tiles because if they get stuck with tiles that don’t make a group of three, they will lose points.

Where Bugs & Co distinguishes itself from almost every other memory game is when you add in the speed element. This is not the first speed memory game that I have played but the speed element does help Bugs & Co. The game can get kind of chaotic as players are trying to grab tiles over one another but this adds a competitive factor into the game which is one of the things I enjoy most about speed games.

Probably Bugs & Co’s greatest strength is its’ simplicity and speed. Bugs & Co takes a couple minutes to learn and less than five minutes to play a game. I honestly can’t see a game of Bugs & Co lasting more than five minutes and a lot of games will probably only take a couple minutes. Bugs & Co is the very definition of a filler game since you can basically play it anywhere at any time. The game is so short that I think the game would benefit from a round system where players play several rounds and the winner is determined by who scores the most points between all of the rounds.

While the mechanic has been used in many other games, I liked the idea of the trophies in Bugs & Co. Basically the trophies reward players who decide to quit looking for matches earlier in the game. These points are quite valuable in the game but you are also sacrificing time that you could have used to look for more matches. The value of taking a trophy really depends on what the other players end up doing. If a player takes a trophy really early and no one takes another trophy for quite some time, the player who took a trophy early is probably going to regret their decision. If all of the players grab the trophies in quick succession though, the player who doesn’t get a trophy will be at a pretty big disadvantage over the other players.

Speaking of scoring, I think Bugs & Co does a pretty good job balancing punishing incomplete sets while also avoiding making the punishment too harsh that players will avoid taking any risks. While I might have given players four or five points for each complete set, I like the idea of getting negative points for incomplete sets. Due to the punishment players need to be careful choosing which tiles they want to pick up. While a couple extra tiles probably won’t ruin a player, you need to be careful about taking too many tiles without knowing where all three tiles are or you could lose a lot of points.

The mechanic in Bugs & Co that I probably question the most is the mechanic where you randomly remove seven tiles from the gameboard before you start playing the game. I am guessing that the game did this so players could never be sure if all of the tiles for a creature were on the table. This makes players hesitate a little before picking up tiles.  The problem with the mechanic though is that it adds unnecessary luck to the game. Players either have to wait to take tiles until they have found all three of a particular creature or they have to take two of the tiles and hope that the third tile is somewhere out on the table. I can see what the game was trying to do with this mechanic but it just hurts the game in my opinion. I personally would ignore this rule entirely.

I think the biggest complaint I have for Bugs & Co though has to be that the game is just kind of boring. While I am not a huge fan of some of the game mechanics, there is nothing inherently wrong with Bugs & Co. You can have fun with the game. The problem is that the game just ends up being kind of boring. While there is a memory mechanic, the game basically boils down to flipping over tiles as quickly as possible hoping to find all three tiles for the same creature. I usually like speed games but it just wasn’t that interesting in Bugs & Co. It gets repetitive flipping over tile after tile hoping to find the tiles that you are looking for.

When I look at the components I really can’t compliment or insult them. The components are far from great but Bugs & Co is a budget game that retails for around $10. Basically all the game has are a bunch of moderately thick cardboard discs. The discs are probably pretty durable but are nothing special. The artwork is kind of cute and should appeal to children but is not the best artwork you will find for this type of game. The components as a whole are not great but aren’t so bad that they hurt the game either.

Should You Buy Bugs & Co?

Basically Bugs & Co is the pure definition of a solid but unspectacular game. The game doesn’t have any glaring issues but it doesn’t really do anything special either. The speed memory combination is an interesting idea but several other games have used the same combination of mechanics. I am not a big fan of the mechanic of removing discs from the game since it just adds unnecessary luck to the game. You can have fun with Bugs & Co but too often the game feels like it is just an exercise of who can flip over tiles the quickest and find the tiles that they are looking for. There is some light strategy with a risk/reward mechanic but there is just not enough decisions/strategy in the game to keep it interesting. For the most part I see Bugs & Co as mostly a game for families with younger children.

If you would like to purchase Bugs & Co you can find it online: Amazon