To set up the board place one hut of every color in each territory (outlined with a thick blue line). Each section of every territory randomly gets one of the huts. This is done to adequately disperse the different colors of huts throughout the gameboard. Place all of the scoring tokens at the beginning of the scoring track and place the village chips on their corresponding spaces on the epoch track. The five clan cards are then shuffled and every player takes one card. Each player looks at their card in secret to figure out which clan color they want to earn the most points during the game.

During a player’s turn they get to choose which hut(s) move and where they move to. Players can move any hut or group of huts to any adjacent spot (spaces across rivers are considered adjacent) as long as the spot being moved to currently holds at least one hut (you can’t move to an empty section on the gameboard). When you decide to move a group of huts, all of the huts on the space are moved to the new location. If there are seven or more huts on a space, that group of huts can no longer move unless it is situated next to another group of huts which contain more total huts. 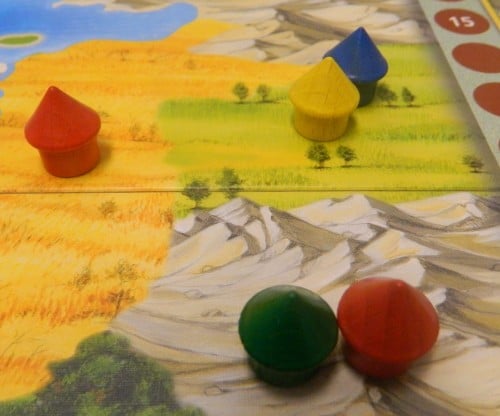 When moving huts, villages may be formed. A village is formed when all of the adjacent spaces of a hut or group of huts are empty. When a village is formed, the player that formed the village gets to take the next village chip from the epoch chart. Scoring of the village then commences. 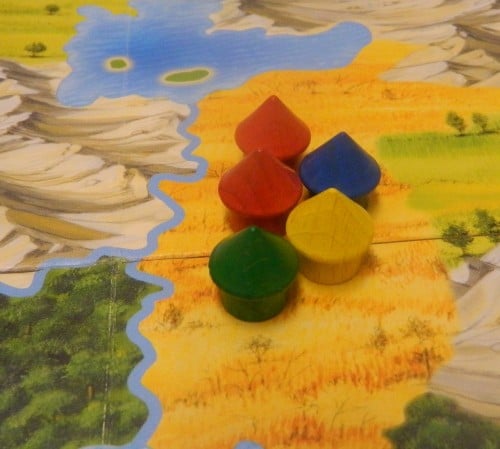 In the following scenario a village has been formed. The village would score five points for green, red, blue, and yellow. The village could either score zero points or bonus points if it was built during an advantageous or disadvantageous period.

Occasionally during the game the different clans don’t get along. If when a village is formed all five colors of huts are present, a strife occurs. When a strife occurs, any color that has only one hut is removed from the village. 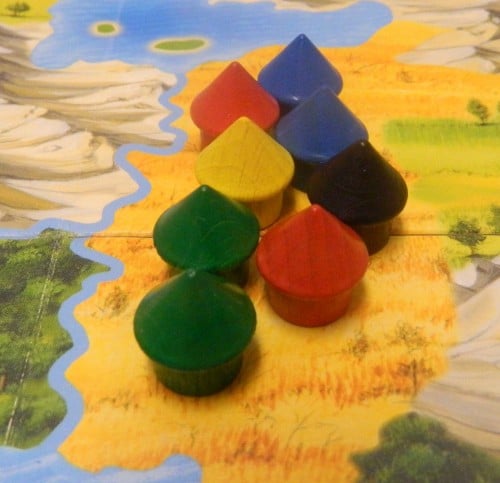 A strife will occur in the formed village because there is one of every colored hut. Because of the strife the yellow and black hut would be eliminated from the village. The green, blue and red player would score six points depending on bonuses/punishments of the current epoch.

The game takes place during five different epochs. During each epoch it is favorable to build a village in one type of terrain while it is disadvantageous to build in other terrain. To determine the current epoch you need to look at the epoch chart on the gameboard. The game is currently in the epoch that corresponds to the top remaining village chip. When looking at the epoch chart, the terrain on the left side is the beneficial terrain and will award any village formed in that terrain the bonus points written on that side of the epoch chart. Villages formed in the disadvantageous terrain (the right side of the chart) will score zero points.

The game can end in two ways. The most likely scenario is when the last village token is taken (the 12th village is formed). The other way the game can end is if there are no more groups of huts that can be moved (all of the huts are surrounded by empty spaces). In this scenario the game ends immediately.

Recently at a board game flea market I ran into the game Clans. I had never heard of the game before and I would never have even given the game a second thought if it wasn’t so cheap. Looking at the box you don’t get a really good idea what the game entails. I didn’t know what to expect before playing the game but I have to admit that Clans was a big surprise for me.

If I had to classify Clans I would consider it to be a strategic abstract euro game. In the game you are trying to maximize the value of your secret tribe while also hurting the other tribes. Due to having to keep your own tribe secret, you could also say that Clans has a little bit of bluffing in it as well.

What I really liked about Clans is that it is so simple while also being complex at the same time. The rulebook is four pages long but you can pretty much learn how to play the game in five minutes. The game is also very easy to teach to other players. Every turn consists of only one action. During your turn you just pick which huts to move and where to move them to. Occasionally you will need to tally points when villages are formed. The scoring system is very simple and as long as you can count huts, you shouldn’t have any trouble with it.

The game is also quite quick and to the point. The game length is generally considered 30 minutes but I think 20-30 minutes is more accurate. Unless you have a player that is a sufferer of analysis paralysis, the game moves very quickly and you don’t have to waste a lot of time waiting. While other players are taking their turns you can always survey the board to try and find your next move.

While the rules are simple to follow and understand, there is quite a bit of strategy to the game. You really need to think out your moves or you are not likely to win the game. Your strategy is likely going to decide your fate in the game.

While most of your focus should be on protecting your own huts, you can just as easily sabotage the other colors. First you can form a village with huts (not of your color) in an area which will score no points during the current epoch. This is the best way to get rid of other colored huts but it is easier said than done since the other players will try to prevent it from happening. It also could easily reveal your color to the other players.

The second way to reduce the points scored by other players is to utilize strifes. The best uses of strifes are to try to eliminate one or two colors from a large village. You might end up losing a couple points but you can prevent these colors from getting any points from the village. If your color is safe in a large village (two of your huts being present), you can use that village to your advantage. If a color already has more than two of their huts in the village, you want to try and throw as many of their huts as you can into the village. You will be wasting their huts and you will get just as many points as the color that added several huts. If a color has only one hut in the village you want to try and keep more of their color from entering the village. In this case that color will be eliminated from the village if a strife were to occur.

Even though they didn’t have a real impact on the game I played, I think the village chips could be really important. In a tight game a couple extra points from village chips could make the difference between winning and losing. I wouldn’t go all out trying to get village chips but when an opportunity presents itself to get a chip I would take it. For example if there is a situation where a small village can be formed, you should probably form it since even if your color is not in the village, you will get almost as many points as the colors that did score and you will get rid of huts from a competing player. It might also help you hide what your true color is.

One thing I liked about Clans is that luck doesn’t have much impact on the game. Luck really only shows up in two ways. First if the random distribution of huts at the beginning of the game puts too many of your huts in one area you may have a harder time getting you huts into different villages. This usually shouldn’t be an issue due to the rules of setup that purposely try to spread out all of the huts.

The other way luck can end up impacting your game is if several of the players end up ganging up on you. This could happen by random chance but usually players will only gang up on a color if someone tipped their hand to their color. If another player figures out your color they can really mess with your game. Since it is important to keep your color secret you need to make plays that will lead the other players to a different color. You can’t constantly move your own color.

The theme of Clans is interesting. The theme actually makes a lot of sense with how the game is played. The game takes place in the time period where nomad tribes were starting to form villages. The game simulates this by having the huts move in a way that a group of huts will start to form that will eventually turn into a village. The gameplay actually does a good job simulating the theme. At the same time though while playing the game, the theme feels like an afterthought. You could easily strip out the entire theme and the game would only slightly change. Due to the lack of theme, I would consider Clans to be an abstract game.

The game recommends playing the game with two to four players. You could easily play the game with five people though since the only difference in the game will be that every color will belong to one of the players instead of there being a color(s) not owned by anyone. While I played the game with three people, I could see the game working perfectly fine with two, four, or five players. You might have alter your strategies a little with a different number of players but I don’t think the number of players will have any impact on your enjoyment of the game.

For the most part I liked the components. I really liked the wooden huts which isn’t much of a surprise since I love wooden game pieces. The cardboard pieces are made of solid cardboard so they should last for a long time without getting damaged. I was disappointed with the gameboard though. The artwork on the gameboard is kind of simple. It is not bad but just kind of boring. I think more could have been done to make the gameboard a little more vibrant. I am guessing the game chose this art style to fit with the more laid back feel to the game. The gameboard also suffers from it sometimes being hard to tell when two sections are connected. There were a couple times during the game where my group thought a village was formed when it turned out another group of huts were still attached.

Overall I was quite surprised with Clans. While not a perfect game, it packs quite a bit of strategy in a game that is very easy to teach to new players. Clans is a pretty abstract game though so if you are not a fan of these type of games you most likely will not like the game and will probably find it to be pretty boring. If you like low to moderately difficult abstract games though I think you will like Clans quite a bit and should consider picking it up.