The object of Charge It! is to be the first player to charge $50,000 to their credit cards over several rounds.

Each round begins with each player getting five (5 or 6 players) or six (2, 3, 4 players) cards. The rest of the cards form the draw pile with the top card being flipped over to form the discard pile.

Each players’ turn begins with the player either taking the top card from the draw or discard pile. The player than chooses one of their cards to either play or discard. The games consists of five different types of cards.

Pictured above are the various different types of cards in Charge It. 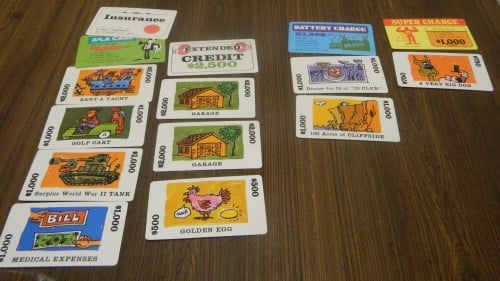 A new round is played in the same manner. Play continues until one player earns more that $50,000 points. That player wins the game.

Credit cards have become a huge part of American society. Almost everything can be purchased on credit these days. Back in 1976 Whitman decided to make a card game about purchasing items on credit with Charge It.

Before getting into the gameplay itself, I have to talk about the theme of the game. Charge It’s theme is terrible. Charge It is billed as the “Family Credit Card Game”. I would say a more appropriate title would be “what not to do with a credit card”. In the game you win by charging as much as you can to your credit card. In the real world that is a great way to lose the game of personal finance. If parents were interested in playing the game to teach their children responsible financial management skills, this game will do the opposite.

In addition to teaching bad spending habits, the theme just doesn’t make any sense at times. For example why in the world would you get insurance on your credit card so you can keep debt? I am guessing that the insurance cards are meant to be for the items themselves but how the game is played the insurance is on the credit card itself and not the merchandise.

The only part of the theme that slightly works is how the game tries to take a humorous take on the credit industry. The game is filled with puns (some good some bad). The merchandise cards for the most part are pretty wacky/random. For example you can buy 1,000 acres of cliffside property, a rent-a-yacht, a motorcycle with training wheels or even a two month rental of a post hole digger. Charge It is quite corny.

As far as gameplay, Charge It would probably be considered a memory card game. The game implements elements of both card and memory games. Players play cards to increase their own totals while messing with the other players. At the same time players need to have a good memory in order to try and remember how much merchandise they have under all of their credit cards.

Charge It actually has some interesting gameplay. The game has a decent amount of strategy and skill to it. You need to be able to remember what you have under your own credit cards while also trying to remember what other players have under theirs. You need to manage the cards in your hand in order to protect your own cards while also keeping enough flexibility that you don’t have to waste your turn just discarding a card.

As far as difficulty Charge It is an easy to moderately difficult game. If you are terrible at memory games you will probably struggle with Charge It. I would consider myself to be pretty average at memory games and I really didn’t have any trouble remembering my own cards but that was probably due to not spending much time trying to remember what the other players’ had under their cards. When playing “lost” cards I just played them against credit cards that had a lot of merchandise under them.

The game doesn’t have a recommended age but I would kids between ages eight and ten should be able to play the game. The game itself is not very hard to learn. You can learn the basics of the game in a couple minutes. The challenge for younger children will be the math (addition in the hundreds and thousands in increments of $250) and the memory aspects of the game. A child with good memory and math skills should not have much trouble with the game.

One of the biggest problems with the game is the surprisingly long length. Each round seems to require at least one reshuffle of the cards since whenever anyone made progress their credit card was sent to the discard pile. In the game I played each round probably lasted at least fifteen minutes. This type of game should have had five to ten minute rounds. Due to the long rounds the game tends to drag towards the end of a round. The game is supposed to be played to $50,000 but the game was moving so slowly that we decided to revise that to $20,000 and it still took at least 30-45 minutes.

This extended length seems to come from players getting too many of the same type of cards. One problem in particular that affected at least one player every single round was that one player would get no credit cards so they couldn’t play any cards. In one round one of the players had to have gone at least ten turns without drawing a credit card so he couldn’t do anything on his turn other than discard cards. I would have said that it was just bad luck and that the cards weren’t shuffled well but this happened every single round to at least one player so I think it might be a problem with the game itself.

In addition to lasting too long, Charge It has an issue with imbalance in the cards. By far the most rigged card in the game is the insurance card. The insurance card essentially guarantees you free money which can’t be taken by the other players. Place the insurance cards on A’La Card and get $6,000 free merchandise that no one can take from you. If you have extended credit line cards you can even get more safe merchandise. In the game I played one player ended up playing the insurance card on his A’La card and he ended up adding three or four extended credit line cards so he got to accumulate between $13,500 and $16,000 which no one could take from him. Since no one could take merchandise from him, it was a waiting game while he accumulated enough wealth to win the round.

In addition to the insurance cards, the extended credit cards seem to be too plentiful. Several times during the game I played I ended up with two or three of the cards at the same time. You don’t really need more than two of them so you end up wasting spots in your hand with them. Plus without an insurance card or a copy of a credit card, you might as well not play them since whatever credit card you play them on will just become a target of the other players.

Finally I would say the components are pretty solid. The game comes with a nice thick plastic card tray which is always nice. The cards are of your typical cardstock which should be fine under normal conditions. The artwork of the cards is not bad. The artwork would best be described as cheesy 1970’s cartoons.

Charge It is a pretty average card game. It has some interesting ideas and can be fun at times. The theme is terrible example for good financial management though. The game also has some overpowered cards and tends to drag on at the end of every hand.