The objective of the game is to be the player with the least amount of points when any player reaches 500 points.

To begin the game each player draws a card from the deck. The first player who draws a BANG or WILD BANG card is the first dealer. The dealer rotates clockwise each round. The dealer deals eight cards to each player. The rest of the cards form the draw pile with the top card being turned face up in order to form the discard pile. If the top card ends up being a Buffalo Chip, Bang, Wild Bang, Stampede, or Slipped on a Chip card it is randomly put back into the deck and a new card is drawn until a letter card is found. 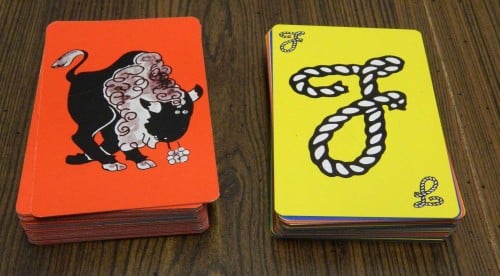 The current card on the top of the discard pile is a yellow F. The next player can play any yellow cards, F cards, or any Wild Bangs. 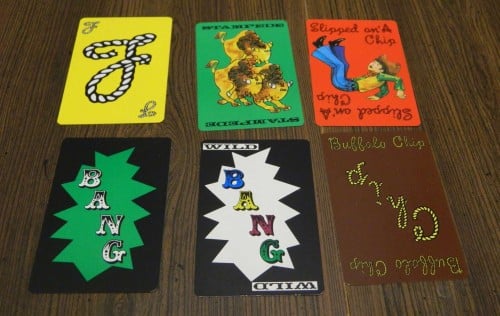 Here is a picture of the six different types of cards in Buffalo Chips.

Besides the letter cards, the game includes several special cards. These cards grant the following abilities:

Whenever a Buffalo Chip card is played, the player that the card is played against has an opportunity to start a Shoot Out in order to get rid of it. If that player has a Bang or a Wild Bang card they can play it to the discard pile in order to pass the Buffalo Chip back to the player who originally played the card. That player then has the ability to play a Bang or Wild Bang card to send it back again. Players take turns playing Bang and Wild Bang cards until a player either runs out of Bang cards or they decide not to play another Bang card. Whoever doesn’t play a Bang card gets stuck with the Buffalo Chip card until the end of the round when it will count as points against them. If the player that the card was originally played against wins the Shoot Out they can continue with their normal turn. If the attacking player wins the Shoot Out, the other player loses their turn. 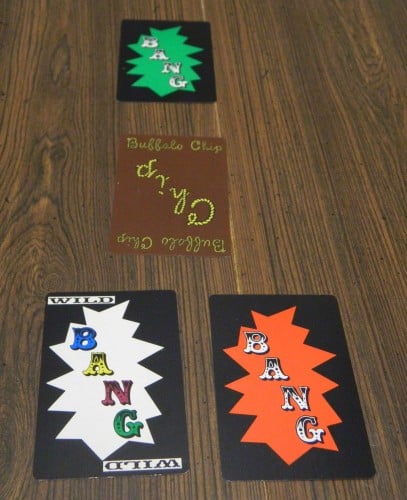 Round End And Scoring

When a player plays their second to last card they must yell out “YAHOO”. If a player catches them not saying “YAHOO”, they can call them out and force them to draw a card from the draw pile. If the player that catches the other player has a Buffalo Chip card in front of them they can give it to the player who forgot to say “YAHOO.” If the next player plays their card and no one caught the player not saying “YAHOO”, that player is now save from the penalty.

When a player plays their last card, the round ends. Each player counts up their points for the round based on the cards in their hand and the Buffalo Chips in front of them. Players score points based on the following chart:

If no player has reached a total of 500 points, a new round is started. When a player reaches 500 points the game ends. Whoever has the least amount of points at this time is declared the winner.

One of the older and most common types of card games are the “shedding” genre of card games. In these games players are dealt a hand of cards and they compete to be the first player to get rid of all of the cards from their hand. The two most known games from this genre are probably Crazy Eights and UNO. UNO has been so successful that it has spawned countless spinoff games (some good and some bad). Since the concepts behind these games are public domain, many publishers have tried to cash in on the success of UNO by trying to create a similar game. One of these games is Buffalo Chips. Buffalo Chips tries to re-theme UNO while adding a couple mechanics but it does a poor job with both.

If you looked through the rules section you probably were quickly reminded of the game UNO or Crazy Eights. You should be since Buffalo Chips is pretty much the exact same game. In each of the games you play cards to the discard pile that either match the number/letter/word or the color of the previous card played on the discard pile. Buffalo Chips even uses most of the same special cards with the Stampede card being the Reverse card and the Slipped On A Chip card being the Skip card from UNO. The Wild Bang is pretty much the Wild card while the Buffalo Chip card takes the draw two mechanic from UNO.

While UNO is not a particularly deep game, I occasionally enjoy playing a couple rounds since it is quick to play and doesn’t require a lot of thought. I can understand why people don’t like it since the game relies pretty heavily on luck with there be very little strategy to the game. While I enjoy UNO, I can not say the same for Buffalo Chips. While it shares a lot in common with UNO, it does nothing to improve upon UNO and in some ways makes the game even worse.

Shoot Well Or Get Stuck With A Buffalo Chip

While Buffalo Chips borrows heavily from Uno and Crazy Eights, the one area where the game distinguishes itself is with the shootouts that determine who get stuck with with Buffalo Chips. The shootout is very simple mechanic since the winner will come down to who has the most Bang cards. While a player could decide not to play a Bang card, I don’t know why you wouldn’t.

While the Buffalo Chip cards/shootouts adds some new mechanics to the genre, I personally disliked the mechanic since all it does is add luck to the game. This mechanic just favors players that were lucky enough to have a lot of bang cards. If you have a lot of bang cards you may actually want to get in shootouts since it will clear you hand quicker and get you closer to winning a round.

While the mechanic could benefit you, it could just as easily destroy your chances at winning. If you are either dealt Buffalo Chip cards or the player you who plays before you gets some Buffalo Chip cards you are out of luck. Getting dealt a Buffalo Chip card is especially bad since you are forced to play it since you will be stuck with the 50 points even if you don’t play it. While it is nice that the card forces the other players to draw two cards, this could also backfire on you since your opponent in the shootout could end up drawing a Bang card that they needed in order to win the shootout.

If the Buffalo Chip cards weren’t worth so many points I wouldn’t hate them as much as I did. Even at a lower point value, they would still make Buffalo Chips worse than UNO.

Buffalo Chips is pretty much a Wild West themed UNO. While there are some slight differences between the two games, the main mechanics in the games are exactly the same. While UNO is not a great game, Buffalo Chips finds a way to make it worse. The Buffalo Chip cards add way too much luck to the game since whoever gets a lot of Bang cards and no Buffalo Chip cards has a huge advantage over the other players. Also if you get stuck with a Buffalo Chip card there is no way you can win a round since even if you finish first, another player who didn’t get a Buffalo Chip will score less points than you did.

If you are not particularly fond of UNO you will likely hate Buffalo Chips. If you do like UNO I would recommend just sticking with UNO. If you really like the “Wild West” theme and want to try a game with some slightly different rules though you may get a little enjoyment out of Buffalo Chips.

Get Off My Lawn Card Game Kickstarter Preview
Click here to cancel reply.

I need a new deck of Buffalo chips ,where can I get them cheep

I looked online and I couldn't find the game for sale anywhere other than on Amazon where the game is quite expensive. You may get lucky and find a copy on eBay for cheap sometime but otherwise I don't know where you could find the game cheaper. If you shop at thrift stores you may be able to find a copy but the odds aren't very good.

The main reason I think the game is expensive is that it was made in 1981 and was never reprinted. This means that there probably aren't a lot of copies around that people are willing to sell.

Other than getting lucky and finding a cheap copy on eBay or a thrift store, if you are looking at a cheaper option you might have to look into similar games like Uno. There are actually quite a few games like Uno that play similarly to Buffalo Chips.

Is the company still around so we can buy buffalo chips at a normal price!

I don't believe ADCO International, Inc (the publisher of Buffalo Chips) is still in business. If they are still in business I don't think they make card games anymore since it appears that the last game they made was in 1981.

As far as finding a cheaper version of the game you may occasionally find a copy on eBay that would probably be cheaper than Amazon. Otherwise if you want a game similar to Buffalo Chips; Uno, Crazy Eights, and quite a few other card cards are pretty similar outside of the theme.