The game will be played in as many rounds as there are players. Each round one player will be the dealer with the player to the left of the dealer starting each round. All four fireman pawns are placed on the bottom space of the game board. All of the cards are shuffled and dealt out to the players face down. To ensure that each player gets the same number of cards, some cards may have to be removed for the current round. In four player games three cards are removed and in three player games ten cards are removed.

During a player’s turn they get to play one card. Based on what card is played one of the firemen will be moved up the ladder. The game includes four different types of cards. 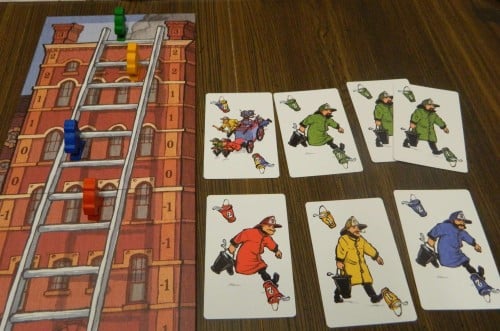 Each player records their score for the round and another round is started. If a player scored negative points for the round, their score is recorded as a score of zero. The firemen are placed at the bottom of the ladder and all of the cards are reshuffled (with cards being discarded as needed).

After you have played quite a few games by Reiner Knizia you start to see a pattern in a lot of his games. Reiner Knizia tends to like to make games with simple mechanics that hide quite a bit of depth and strategy beneath the surface. This holds true for Bucket Brigade as well.

Bucket Brigade is a simple game to learn and play. All you do on a turn is play a card and move one of the pawns forward. The game is so simple that most people would assume that the game wasn’t very good. If this was all there was to the game, Bucket Brigade would kind of suck. With the basic gameplay being so simple, Bucket Brigade is really easy to teach and learn. The instructions only take minutes to read and teach to new players. While the game could be taught to children under the age of seven, I wouldn’t recommend it since I don’t think most younger children would understand the underlying strategy in the game.

The game’s strategy comes from which cards you choose to play. The goal of each round is to try and advance the firemen that you have the most cards of. The only way to move a firefighter forward though is to play a card of the same color or a wild. This presents an interesting trade off scenario as you have to play cards to move the fireman forward but if you play the cards you lose the potential points you could have earned from holding the card.

This trade off between holding onto a card versus playing it is the driving force behind the whole game. Players need to balance both in order to score the most points in the game. If you hold onto all of the cards of one color you might get stuck either scoring negative points or scoring very few points since the other players are unlikely to advance your color unless they are also pursuing that color. On the other hand if you play all of your cards to advance one of the firemen to the top of the building you won’t have any cards left to actually score points with.

While your success relies heavily on what the other players end up doing, your decisions will have an impact as well. If a majority of your cards are of the same color, you are going to want to focus on that color. If you end up getting a pair of walk cards of the same color you pretty much have to pursue that color since the X5 multiplayer is so beneficial. If you can get the color of your pair to the top of the building you will score 15 points for those two cards which is a lot of points. I ended up winning the game since I was able to get a color that I had a pair of to the top of the building in multiple rounds.

While wilds give you a lot of flexibility, I found the wilds to be best used early in a round. Wilds are worth no points at the end of a round so you don’t want to get stuck with any when a round ends. The wilds are most valuable in moving forward the firemen of the colors that you are trying to score with. Wilds are valuable in this role since they help you score more points while not having to sacrifice cards of that color that you could have used to score more points.

One thing that is disappointing with Bucket Brigade is that in the game that I played, the negative spaces never came into play. In all four rounds played, all of the firemen always got to at least the zero spaces. Unless two players are working really hard to get one color to the top right away, I think it is going to be hard for any of the colors not to reach at least the zero spaces. Since most of the cards are dealt out to players, it is very likely that each color will have at least one player that wants it to succeed.

While thematically it would make no sense, I kind of wish that the game would have included cards that would have sent firemen back spaces. With every card always moving firemen forward, there is no way to hurt the other players other than just trying to race a fireman to the top of the building. If there were cards that moved firemen backwards a player would have to do a good job hiding the color they are going after since players would otherwise target that color and send it backwards. Players could also use these cards to send a fireman back towards the negative spaces just before a round ends in order to sabotage another player.

While your decisions can have a lot of impact on the outcome of the game, if you don’t get help from the other players you probably won’t win. In order to get your colors to the top of the building you need at least one other player to help you move that fireman forward. If you end up being the only player moving one of the colors forward, you aren’t going to get very far. This is the main reason why there is quite a bit of luck in Bucket Brigade. You can’t impact what the other players are going to play. You just need to sit back and hope that the other players end up helping you out.

The turn order is also going to have an impact in each round. Towards the end of a round the turn order is really important since the players who get to play just before a round ends have a chance to get the bonus points or make one last move in order to better position the color(s) that they are pursuing.

I always love when a game includes unique meeples and Bucket Brigade doesn’t disappoint. The game includes four firemen meeples which I thought were well done. Some of the players didn’t think they really looked like firefighters though.

While it is done for gameplay purposes, the ladder in Bucket Brigade has to be the largest ladder in history. The ladder is as wide as an entire apartment complex and can hold at least four firefighters on the exact same ladder rung. It would be a sight to see four fireman run up a ladder side by side.

Bucket Brigade is the type of game that you would expect out of Reiner Knizia. The game is simple but hides quite a bit of strategy underneath the surface. The mechanic of choosing to keep a card to score points versus using the card to advance the firefighter is an interesting mechanic and provides quite a few strategic options for players. Unfortunately this mechanic also makes you reliant on what other players decide to do. If the other players don’t play cards that help you, you won’t score a lot of points.

Overall I had fun playing Bucket Brigade and I plan on keeping the game. There are quite a few other similar games that share a lot of the same mechanics as Bucket Brigade. Honeybears in particular is exactly the same game with a different theme. If you own one of these types of games I don’t see any need to also own Bucket Brigade. If the game’s concept interests you or you generally like Reiner Knizia’s games, I would suggest looking into Bucket Brigade especially since at the time of this review Bucket Brigade is less than $10 on Amazon.