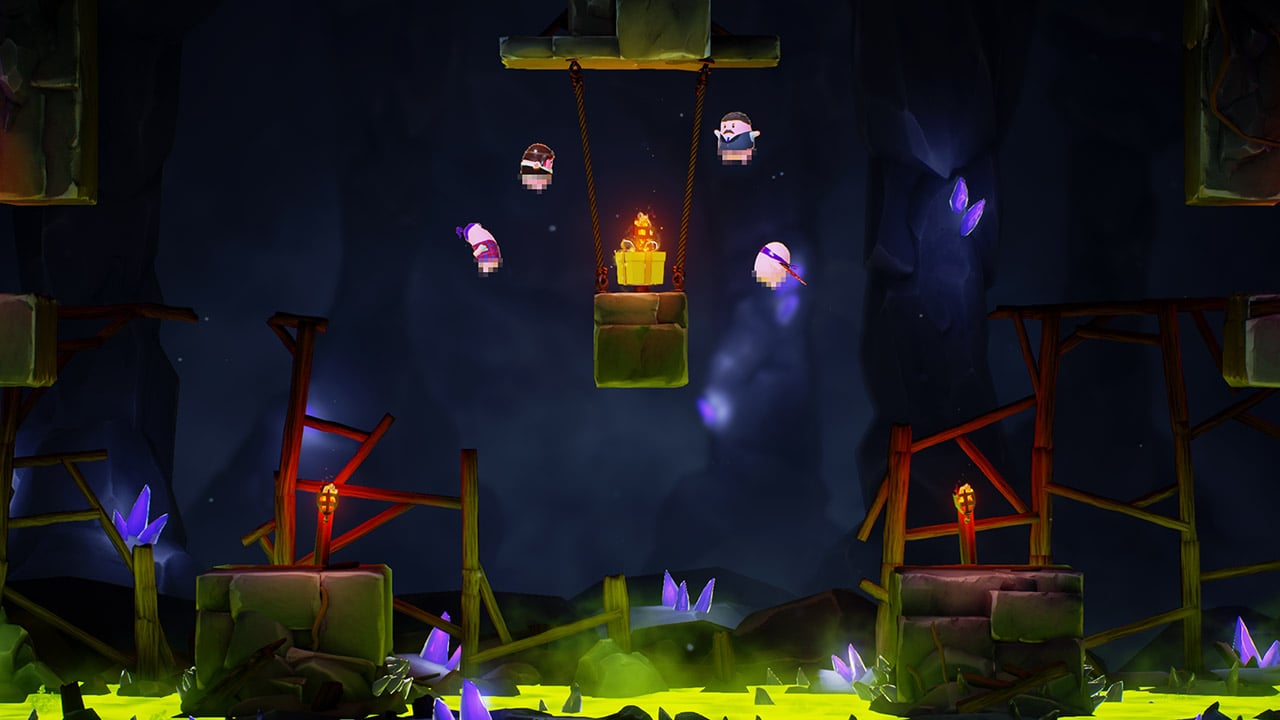 In Brief Battles each player chooses their battler and enters the fray. The objective is to defeat/outlast your opponents. Players move around the stage avoiding their opponents while positioning themselves in order to destroy them. When positioned above an opponent, with the press of a button you can butt slam your opponents in order to eliminate them. In addition you can collect “magic underwear” which are positioned around the stage that will give you special abilities. Special abilities include giving you ranged and projectile attacks, restoring your health, and there are even some that are traps that hurt you.

For people familiar with these type of party battle games, Brief Battles should sound really familiar. For those not familiar with the genre I would probably classify it as a simplified Super Smash Bros. Instead of each character having a set of unique attacks, each player has a total of two attacks with one changing based on what underwear you are wearing. This simplicity makes Brief Battles really simple to play. Players who rarely play video games shouldn’t have any troubles playing the game as you can pick it up and play it pretty easily.

This is a good thing for Brief Battles as it is meant to be a game that you can just pick up and play. Each game plays in around five minutes and takes maybe a minute to learn how to play. As Brief Battles is meant to be played as a party game, this works well for the game as players can easily jump in and out of the game without any issues. In general I found the game to be pretty fun. With the simplified gameplay and the “underwear” theme, Brief Battles was never meant to be a serious game. As a silly little party battle game though you can have fun with the game if you enjoy these type of games.

The main problem I had with Brief Battles is that the game is not highly original. There have been other games that have had pretty similar gameplay to Brief Battles. This is not all that surprising as the genre is pretty popular and not open to a lot of originality. When compared to these other similar games I can’t say that Brief Battles is particularly original. The gameplay is very similar to the point that the powerups are almost exactly the same as other games in the genre. Brief Battles is a fun game but it is not something that hasn’t been done before. I would say that it is better than a lot of these type of games but it doesn’t revolutionize the genre.

At this point I would have said that Brief Battles was a slightly above average party battle game. The game is fun but not highly original. The game can also get repetitive after a while. I think the one thing that truly distinguishes Brief Battles from similar party battle games though are the challenge modes. At first I thought these were going to mostly be a gimmick. They just looked like a simple way to add some single player content into a mostly multiplayer game. After playing the different challenges though I would honestly say that they are some of the best parts of the game.

As I mentioned earlier I was pleasantly surprised by these modes. They could have easily been slapped together in order to add a little more content to the game. Instead it feels like real effort was put into them. These modes are fun little distractions from the main game and give you something to do when you get sick of the normal game. I liked all three types of challenges and they actually play quite a bit differently. Underpants Collector basically plays like a platforming challenge as you jump and move around the stage to collect all of them in time. Tighty Whitey Targets reminds me a lot of the Target Smash mini game from the Super Smash Bros. series that for some reason I have really fond memories for.

The best mode though has to be the Butt-Em-Up Battles. First of all I appreciate that it supports two players and I kind of wish the other challenge modes would support more than one player. What I really liked about this mode is that it actually takes the mechanics from the main game and does something unique with them. This mode kind of plays like a mini action game as you have to use your butt slam and special ability to destroy all of your enemies before they can get to you. With a partner this mode is really fun. Unfortunately the mode only includes 10 levels at this point. I really hope more levels are added to this mode in the future.

Brief Battles is a game that I had some mixed feelings about while playing. The main gameplay is quite simple and fun as you battle your friends. While not as fun with two players versus four, if you like these type of party battle games you will have fun with the game. Unfortunately the gameplay is not particularly original as it is similar to most of the other games in this genre. It is better than a lot of the games in the genre but it doesn’t revolutionize the genre either. Then I made my way to the challenge modes and I was pleasantly surprised by them. I thought they were going to be just an afterthought, but they are surprisingly fun. They bring a nice change of pace for individual players and are arguably the best part of the game.

My recommendation for Brief Battles comes down to two things. If you don’t have two or three other players to play the game with, Brief Battles is probably not worth it to you. The challenges are pretty fun but the game is meant to be a multiplayer game, and thus you won’t get a lot out of the game if you don’t have other people to play the game with. The other consideration comes down to whether you like party battle games. The game is pretty similar to the rest of the genre so if you don’t really care for it I don’t see Brief Battles being for you. If you like party battle games though I think you could get quite a bit of enjoyment out of Brief Battles.