How to Play Blast from the Past

A player begins their turn by spinning the spinner. Depending on what they spin the player will choose a decade and a category for their question.

The player to the right of the current player will take a card for the corresponding year and ask the question corresponding to the category. There are four different categories in Blast from the Past. 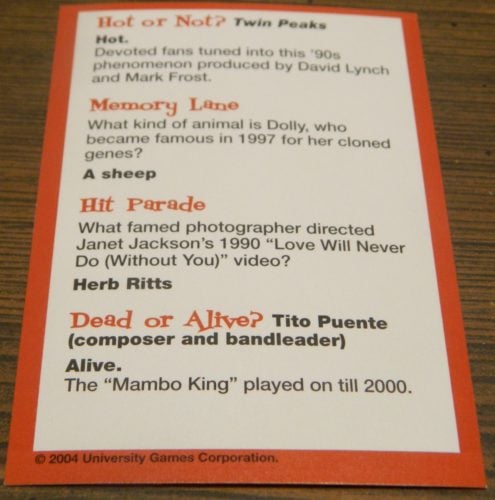 Here is one of the cards from the game. Based on the category for the current round the current player will be asked one of these questions. 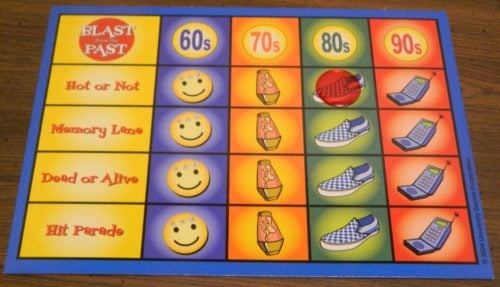 This player correctly answered a 1980s Hot or Not? question so they will place a marker on the corresponding spot of their scorecard.

The objective of Blast from the Past is to complete four in a row (vertically, horizontally, diagonally) on your answer card. The number of rows you have to complete to win depends on the number of players: 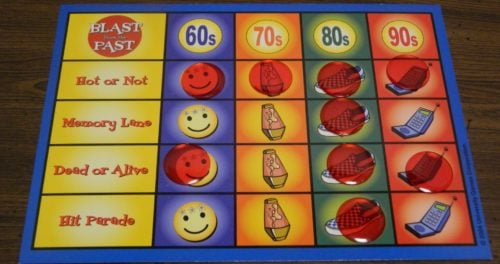 This player has won the game because they have completed a row (Hot or Not) and a column (80s).

My Thoughts on Blast from the Past

This shouldn’t come as a surprise, but Blast from the Past is pretty much exactly what it looks like. The game is a pretty basic trivia game that is focused on the 1960s through the 1990s. You basically spin a spinner and get asked a question from one of the four categories from one of the decades. If you get the question correct you score a point, but if you are wrong you get nothing. The first person to get enough questions right wins the game.

There is only one mechanic in Blast from the Past that is even somewhat unique. That mechanic is what I like to refer to as the “Bingo” mechanic. In most trivia games you either need to get a certain number of questions correct or you need to correctly answer one question from every category in order to win the game. If you are only playing with two players this is still the case as you have to answer one question correctly for each each category decade combo in order to win. With more than two players though it actually adds some decision making to the game. What I liked about this mechanic is that it gives you some choice over what questions you end up having to answer. Each space on the spinner gives you some choice as you will either get to pick the category or decade if not both. Therefore if you are either really strong at some of the categories or decades you can focus on those while mostly ignoring the decade category combos that you are weak at. This mechanic doesn’t add a ton of strategy to the game, but it is a welcome edition to the typical trivia game that forces you to correctly answer questions from a category that you are weak at. It doesn’t magically make Blast from the Past a good game, but I thought it was a good addition.

Unfortunately the rest of the game is pretty generic. This applies to the categories as well. Hit Parade consists of pretty typical music trivia. Most of the questions are about singers, song titles and lyrics. Memory Lane mostly focuses on pop culture or historic events that occurred during the decade. Hot or Not? questions are about what was popular during the decade. The only somewhat unique category is Dead or Alive? which features questions about when celebrities died. Maybe it is just me but I think it is a little morbid having a whole category focused on the deaths of celebrities.

With these different categories the question difficulty can differ quite a bit. Some questions can be about topics that almost everyone is familiar with while others can be about very specific topics where you have to already have a lot of knowledge about the topic to have any chance of guessing the correct answer. Because of this varied level of difficulty, there is some luck in the game as one player could win the game solely because they were given easier questions. This range in difficulty is supplemented by the fact that half of the questions only have two potential answers. Hot or Not? and Dead or Alive? always give you a 50/50 chance of being right even if you have no idea what the answer is. This is why I would recommend focusing on these categories as they give you the best chances of getting a correct answer. Even though Dead or Alive? gives you a 50/50 chance of getting the correct answer it is not always as easy as you would think. The game likes to pick celebrities that either died during the decade or died a couple years before or after the decade.

This applies even more to the Hot or Not? category. Based on its premise the Hot or Not? category is interesting as it forces players to think about trends from different decades. This category could have been pretty interesting as these type of questions don’t end up in a lot of trivia games. My problem with the category is that the people who wrote the questions never really defined what is considered hot and not. The game just says that something that was popular during the decade is hot without ever defining what is considered popular. This creates some problems for the category as popularity is not applied consistently to all of the cards. For some things it is considered popular if it was invented and around during the decade. For other items though it had to reach a certain threshold in order to be considered popular. This is not a big deal for some cards as it is obvious what decade it was popular in. It is much more complicated in others though as you could make arguments over what decade it should have been considered popular. This leads to some questions feeling like a random guess even if you have a lot of knowledge of the topic.

While this should be pretty obvious, Blast from the Past does give a benefit to players that have lived through all of the decades featured in the game. Outside of the easy questions and the 50/50 guesses, people who did not live through a decade will probably have a pretty hard time answering questions from the decade(s) they weren’t alive for. For example in the group that I played with I was the youngest player and had only lived through the 1990s and a small portion of the 1980s. Therefore I knew going in that it was going to be hard to do well in the 1960s and 1970s categories as I wasn’t even alive for them. Based on my experience playing the game it seems like you do get a substantial advantage if you have lived through most if not all of the decades. For younger players to stand a chance in the game you need to be more strategic in what questions you choose to take. If possible you probably want to focus on the more recent decades or focus on the 50/50 categories where you don’t really have to know a lot about the decade to stand a chance at being correct. This is one of the main reasons that I liked that Blast from the Past gives you a choice over what questions you are asked.

Finally the component quality for Blast from the Past is basically what you would expect from a mainstream trivia game. You get quite a few trivia cards as the game includes 328 and each card features one question for each category. You should be able to play quite a few games without having to worry about repeats. Other than the quantity of cards though the components are kind of disappointing. The art style is quite basic. The quality of the components are nothing special either. This is exemplified by the spinner which doesn’t even spin all that well. The components serve their purpose but don’t do much else.

Should You Buy Blast from the Past?

Buy Blast from the Past online: Amazon