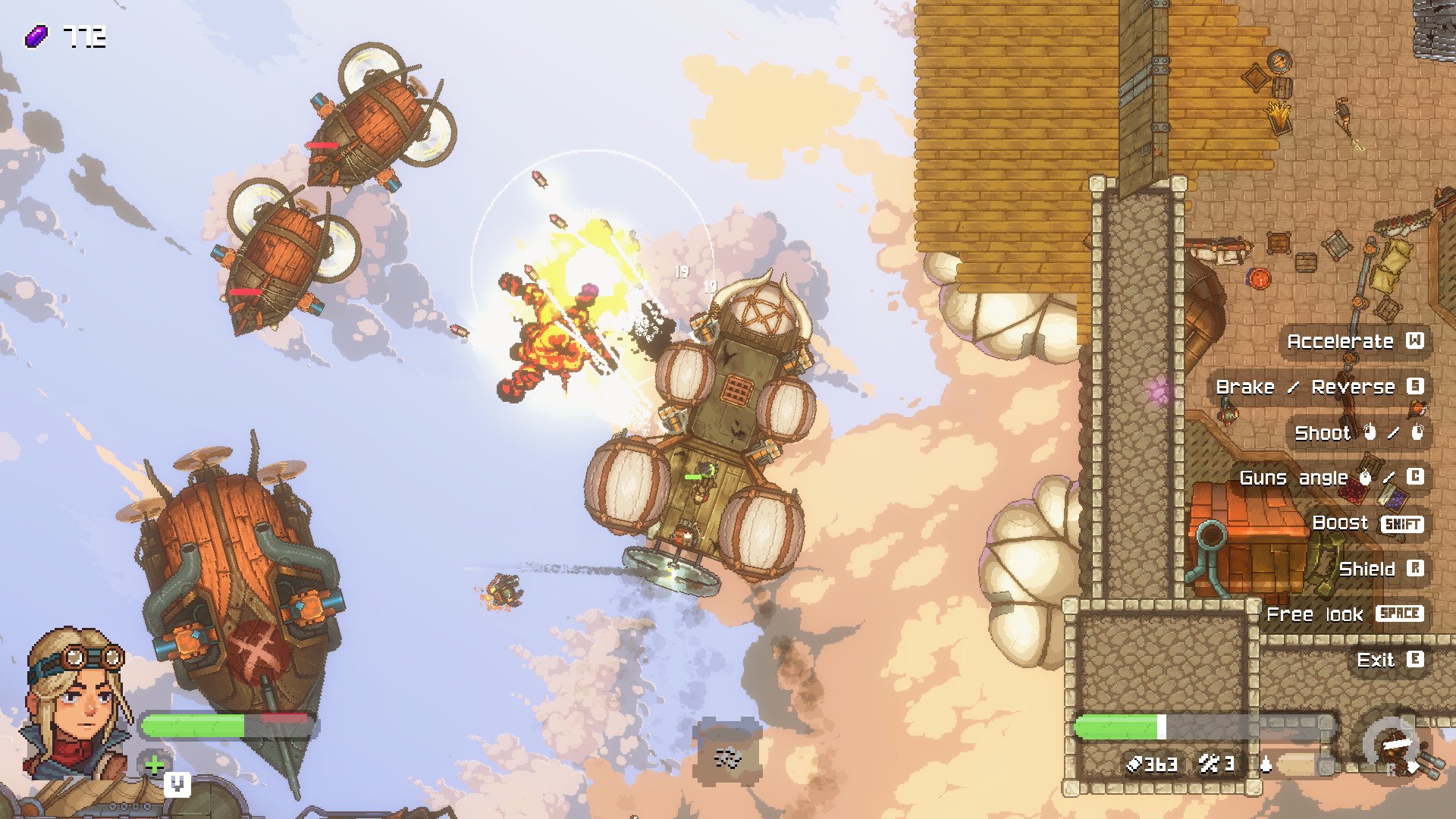 Today I am looking at the new indie video game Black Skylands developed by Hungry Couch Games and published by tinyBuild which releases in Early Access tomorrow. I honestly hadn’t heard about the game until I got the chance to review it. After watching the game’s trailer though, I was intrigued. Between the premise of a world built in the clouds and the action packed island hopping gameplay, I thought Black Skylands showed quite a bit of potential. Despite just being released in Early Access, Black Skylands is already a satisfying and fun action adventure game that I can’t wait to see where it ends up.

The world of Black Skylands takes place in the distant future. The Earth has turned into a bunch of floating islands so humanity has been forced to create airships to travel around. Everything was peaceful for a while until the Swarm appears destroying everything in its path. To defend against the Swarm, the Falcons (a group of warriors) were given the power and resources to mount a fight against the Swarm. While they held back the Swarm for years, they themselves became a threat to the other inhabitants as they imposed their expanded power upon the peaceful citizens. You play as Eva the daughter of one of the leaders of the Earners. You must protect your home from both the Swarm and the Falcons as you try to find a way to put an end to both threats.

Black Skylands is the type of game that doesn’t fit nicely into a typical video game genre. This is in part due to it containing mechanics from a number of different genres.

I would probably say that the main mechanic in Black Skylands is a top down shooter. Basically the entire game takes place in a top down perspective. As you travel between the islands you will encounter enemies which you have to defeat. You will have access to a melee attack and a number of different types of guns. The combat is action packed as you run around shooting enemies while avoiding their attacks.

The second main element of the game is an exploration mechanic. As everything takes place in the sky, you will be the captain of your very own airship. You basically use your ship to travel between islands, but it also has weapons equipped so you can shoot down enemy ships. Besides traveling to mission objectives, your other main objective is to eliminate all of the enemies from each chain of islands in order to gain control over the island for yourself which will give you access to more upgrades.

The final major element of Black Skylands is a crafting mechanic. You can customize a lot of things in the game from your weapons to your vehicle. Your base itself can even be customized as you can construct a number of buildings which you can use to craft new weapons, upgrades, and other things to help you in your journey. In your adventures you will gather resources which can be further refined in order to purchase upgrades for your character.

In many ways Black Skylands feels like a mish mash of different video game genres combined together into an action game. While some of these mechanics are more developed than others at this point, the whole package works quite a bit better than I was initially expecting. The combat is the main element of the game at this point and it serves the game well. I am generally not the biggest fan of top down shooters. Despite this I actually thought the combat in Black Skylands was quite fun. The game does a good job making you feel powerful where you can take on a large group of enemies, but you also can’t be too lax as you will die if you just run in without even trying to avoid enemy bullets. The game has a number of different types of weapons allowing you to focus on those that fit your playstyle best. The ship combat is also quite satisfying.

I think the element of the game that I enjoyed the most was the exploration. The game does a good job putting the islands far enough part where it feels like you are flying an airship without having too long of breaks where it becomes dull. When you arrive at an island you can use your grappling hook to quickly move from your ship to the island and vice versa. A lot of games utilize a capturing territory mechanic these days, but it is still really satisfying. Besides growing your territory, each new location you liberate allows you to unlock more abilities which will help you while you are exploring. The size of the world is supposed to basically double by the end of Early Access, but I was already pretty impressed with the number of islands that you can already explore. Each island has their own unique look and layout. A lot rely on you just killing all of the enemies occupying them, but a number of them also have puzzle elements.

On top of the satisfying gameplay, I was also intrigued by the game’s theme and atmosphere. While the game’s story shares inspiration with other sci-fi stories, it has its own unique elements as well. I think the game has already done a good job creating an interesting world that you want to explore. This is supported by the game’s visuals. While the top down view does limit how much the game can show, I thought the game’s graphics were quite good. The islands have their own distinct looks. Possibly the game’s greatest visuals come from just sailing through the skies. The various layers you see below you while traveling really makes it feel like you are flying through the sky. While only a portion of the story is currently in place, I am intrigued to see where the developers end up taking the game’s world.

I was impressed with the current build of Black Skylands especially since the game intends to stay in early access for around a year. The game does have a couple of things that I think could be improved though.

First while the controls usually work well, I did occasionally encounter some issues with them. I am not entirely sure why but the game would occasionally not allow me to aim my weapons, dodge, or even shoot my weapons. I am not sure what caused these issues, but if I temporarily stopped all movement and didn’t push any buttons for a second or two this issue resolved itself. This is usually not a huge problem except when it happens in the middle of a battle. I also had one time while playing the game where the framerate dropped significantly for some reason. I am not entirely sure what caused this as it only happened the one time. This is not that unexpected for a game that just entered Early Access especially since it plans to spend at least a year in it.

The other main issue I had with the game is more of a game design choice. One of the things that I liked the most about the game was liberating new areas of the map and adding them to my territory. With this though once you liberate a territory it doesn’t stay that way unless you defend it. In theory I don’t mind this as it doesn’t make a lot of sense that you can kick the enemy forces out of a territory and they just let it go. I didn’t mind having to go back to old locations to defend them occasionally. The problem is that these situations seemed to come up too often in my opinion. The good news is the game usually gives you a decent amount of time to return and defend the territory before you lose it. It still kind of felt like you had to drop what you were doing just to go back to the location to defend it. What made this even worse is that at least for me it was usually the same territory over and over again that needed to be defended. I think this mechanic should stay in the game, but I personally think it should be dialed back a little.

In a lot of ways Black Skylands feels like an ambitious game. Between all of the game’s different mechanics and the world that it is trying to create, you can tell that the developers wanted to create something more than a typical action game. For a game that is expected to stay in Early Access for around a year, I have to say that I was pretty impressed with the game so far. The game does have some occasional issues with the controls/optimization, and having to keep going back to defend your cities gets a little repetitive after a while. The game already has a great foundation in place for a fun action game. I am not even the biggest fan of top down shooters, and yet I still found the combat to be quite satisfying. The exploration is fun as well since the game does a good job making it feel like you are flying an airship. To top it all up, the game has an interesting world to explore and a great visual style.

While you will likely have to wait a while for the final game to come out, I have really enjoyed what I have played of the game so far. If the game’s concept doesn’t particularly interest you, it may not be for you. If the game looks interesting to you, you should enjoy Black Skylands and should consider picking it up.