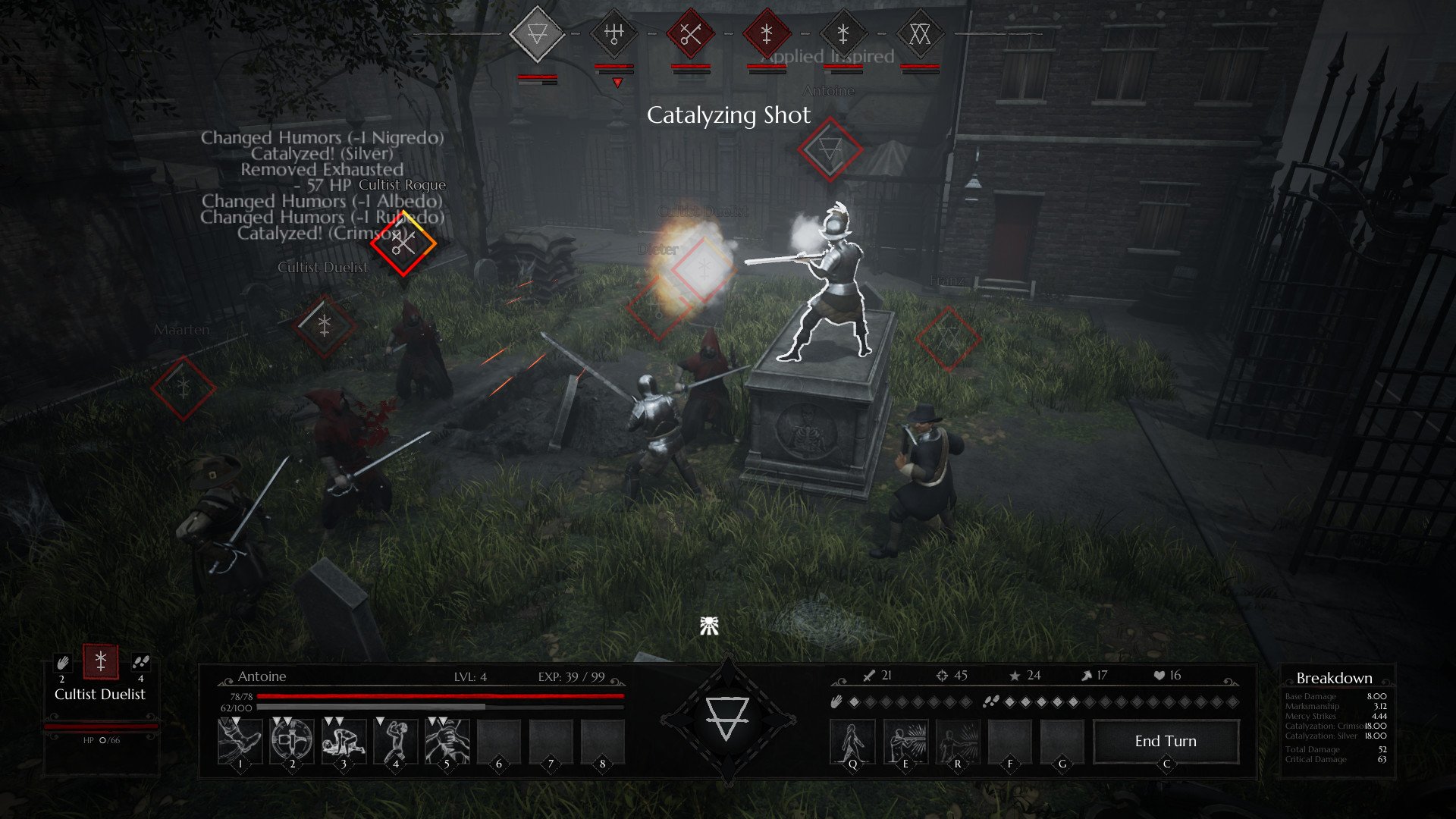 There are quite a few turn based strategy RPGs released every year which generally makes them hard to stand out. When I first saw Black Legend though I was intrigued. First the game was developed by Warcave which created Warparty, a game that I enjoyed quite a bit. Additionally I was intrigued by the game’s overall theme. The alternative history fantasy theme of the game intrigued me. Black Legend has a good atmosphere and some fun and unique combat, but it suffers from sometimes being a little too harsh on players.

Black Legend takes place in the city of Grant in the 17th century. Many years ago the alchemist Mephisto unleashed a plague upon the city. The city is surrounded by fog that makes people go mad. While Mephisto is now gone, his followers still remain in the city causing mayhem. This has lead Grant to basically be exiled from all neighboring cities. In order to get a pardon for your past crimes you must lead a band of mercenaries into Grant to wipe out the threat for good. Can you save the city or will you fall into madness like the rest of the town?

At its core Black Legend is a turn based strategy RPG. Probably the most prevalent mechanic is the turn based combat. While exploring the town you will occasionally run into groups of cultists and other creatures that aren’t in the mood for talking. You will be able to bring up to four mercenaries into battle with you. Your mercenaries as well as your enemies will take turns performing actions trying to kill each other’s units.

Each unit is given a number of action and movement points. These points can be used in any order and you can even switch between moving and performing actions. Movement points are used to move around the battlefield. Positioning is important in the game as you can deal more damage if you attack a unit from their back or side. Enemies can also do the same to you. At the end of your turn you can choose which direction that your unit will face.

As for using your action points you have a number of actions that you can perform. The actions you can perform depend on your current class as well as abilities that you have unlocked in the past. Some of these abilities can heal and provide status effects. Most deal some sort of damage to enemies though. Basically your objective is to reduce the enemies’ health to zero to remove them from the fight. The same can happen to your units as well. Depending on your chosen difficulty, death for your units either lasts for the rest of the fight or it can be permanent.

I have to say that I had some mixed feelings about the game’s combat. Most of the elements of combat are similar to a lot of games from this genre. Positioning is quite important for both offense and defense. What abilities you choose to use as well as how you use all of your units will also play a role. Ultimately I had fun with these elements of the game and I think fans of the genre should as well.

Where the game really differentiates itself is with the alchemy system. I give the game credit for adding a little twist to the combat that is different from anything else that I have played from this genre. I had some mixed feelings about it. First of all it does take some time to get used to. The game does give you a sort of mini tutorial that gives you a brief explanation of what you should do. Past the tutorial though it still takes some time to get used to it. Utilizing these mechanics are crucial to doing well in the game. Therefore I had some early troubles as I adjusted to them. It will take some time to get used to it, but it started to grow on me the more that I played the game.

Other than the normal turn based combat, Black Legend also has some standard exploration mechanics. As you explore you will find various crates to open, sidequests that give you additional money/equipment, and shortcuts that you can open up to move through areas of the city quicker. These elements take place in real time. When you encounter a group of enemies you will see a red vision cone on the ground. If you want to avoid a fight you can move around the enemies’ vision. The game basically relies on you moving around the city of Grant completing various tasks in order to save it from the fog.

While these mechanics aren’t bad, I honestly found them to be a little wasted. I give the game credit as the city is designed in a way where it actually feels like a city. There are plenty of places to explore within each section of the city. The exploration itself is fine even though a map would have been appreciated. The problem is that the game makes it seem like stealth is a real option in the game. In some cases it is as you can sometimes avoid conflict from taking another path or avoiding enemies’ vision cones. The game uses a system where you can be in a unit’s line of sight, but if you don’t break the vision cone they won’t notice you. This doesn’t happen often though as there are usually too many enemies in an area where you can’t proceed through the area without alerting at least one of the enemies triggering a fight.

This actually leads me to the game’s biggest fault in my opinion. I just wasn’t a big fan of the game’s difficulty. The game has three difficulties and I ended up playing on the middle/normal difficulty. I wouldn’t necessarily say that the game is super hard (that might not hold true for the hardest difficulty), but it will definitely challenge you. Its just that the game feels a little unfair at times.

Let me explain. In a lot of these types of games, good players can avoid taking much damage. Through tactics players can eliminate enemies before they are even able to attack them. Maybe I was just doing something wrong, but this doesn’t seem to be an option in Black Legend. Between the number of enemy units in each fight and the fact that you usually need multiple of your units’ attacks to just take down one enemy, there is no real way to avoid taking damage. If you play on normal difficulty or lower you don’t have to worry about losing one of your units even if they are killed, as they will respawn after the fight with basically no health remaining. Each fight you win will likely come at a high cost though. The amount of damage you incur in each fight basically will require you to use multiple health potions after each fight. While you will encounter quite a few during your journeys, they will run out pretty quickly. Thus you end up having to waste quite a bit of your money just buying health potions. While you can usually survive most fights, you will end up wasting a lot of time and money healing your units after each fight. I just didn’t find this to be all that satisfying. Even if you do a good job with your tactics, you likely will still lose quite a bit of health. Enemies respawn really quickly as well so you can never really clear out an area.

As for Black Legend’s overall story and atmosphere I had mixed feelings. For a game made by an indie studio I think it deserves credit for its overall atmosphere. The game chose to utilize a dark theme and doesn’t shy away from it. The game has a Mature rating for a reason. I think the game does a good job creating this type of atmosphere. The city of Grant feels like it has been mostly abandoned outside of the cultists and other creatures that roam the streets. I personally am not the biggest fan of this type of atmosphere, but fans of this type of setting should really like it. As for the story to the point that I have made it so far (I haven’t beat the game yet), I would say that it feels pretty average. The story is not bad, but it is not particularly original either.

Ultimately I had some mixed feelings about Black Legend. There are some things that I really liked, and other things that I think could have been better. At its core the game shares a lot in common with your typical turn based strategy RPG. I thought the game did a good job in this area as the combat is pretty satisfying and requires quite a bit of strategy. Where the game really differentiates itself is with its alchemy system. To deal the most damage to enemies you need to perform abilities that inflict different types of instability. I think the game deserves credit for this mechanic as it is pretty unique and it is interesting once you get used to it. It does have a learning curve though. The biggest issue that I had with the game is that at times it feels like you can’t really protect your units. No matter what you do your units will incur a lot of damage in combat forcing you to spend a decent amount of time and money healing your units between fights. This is all wrapped up in an atmosphere that is well done even if the story is a little generic.

My recommendation for Black Legend depends on your opinion of turn based strategy RPGs and the overall theme of the game. If neither really interest you, I don’t see the game being for you. Those that think the concept sounds interesting though should enjoy the game as long as they don’t mind having to deal with a lot of lost health. In this case I think it is worth looking into picking up Black Legend.