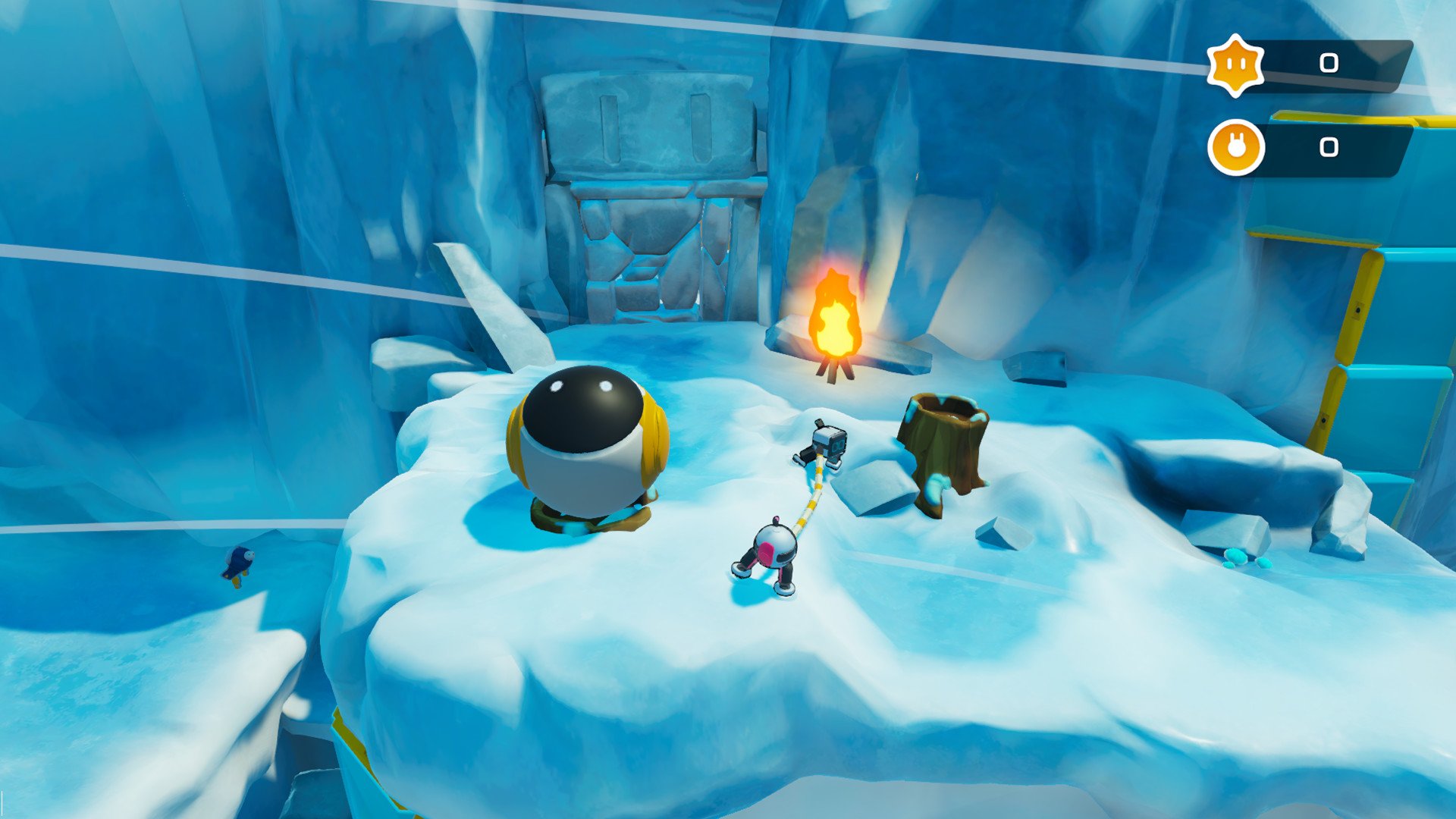 Around two week ago I took a look at a preview build of Biped on PC. I was really intrigued by the game as the gameplay was really fun, the overall atmosphere was cute, and the co-op gameplay was really satisfying. After I received a review copy of the game to check out I was able to check out the rest of the game. While the preview build was on PC, I ended up playing the full game on PlayStation 4. While I wish the game was a little longer, Biped is a cute little action puzzle game filled with fun co-op gameplay.

In Biped you play as Aku and Sila. These robots as well as others are in charge of monitoring different planets through beacons placed on the surface. Aku and Sila are on their ship when a sudden solar storm messes up all of the beacons preventing them from monitoring the planet. In order to get the beacons up and running again they must head to the planet and reach the beacons to reactivate them. This isn’t so easy as there are many obstacles standing between them and reaching their final destination. Can you and a partner work together well enough that you can make it past all of the obstacles that stand in your way?

As I took a look at the game around two weeks ago I am going to give more of a brief overview of what I looked at in the preview so I can focus more on new observations from the final release of the game. Check out my preview to see my initial thoughts on the game.

If I were to classify Biped I would probably say that it kind of feels like a combination of an action adventure game mixed with some puzzle mechanics. The main gameplay in Biped revolves around controlling your robot in order to get it past the obstacles that stand in your way. This is not as easy as it first seems as the catch is that you must independently move both of the robot’s legs. This makes just moving around more of a challenge than you would initially think. In addition to using the legs to move your character you also use the robot’s legs to pull levers or activate switches which are used to solve most of the game’s puzzles.

With the premise of having to move each leg independently a lot of people might think that the game sounds complicated. When you first start up the game there is a learning curve as you need to figure out how to properly move the legs to walk somewhat normally and solve the various puzzles. The learning curve is pretty simple though. At first it might be somewhat hard to walk, but most players should adjust pretty quickly. Once you get the walking down the rest of the gameplay is pretty basic.

As for the game’s overall difficulty I would say that it is kind of depends. On one side there is little to no pressure in the game. The game has no time limits and there are no limits on how many times you can die. How fast you complete a level or how many lives it takes only impacts whether you receive one of the bonus stars. Therefore you don’t have to worry about failing a level. If you are willing to keep at it you can beat any of the levels in the game. In addition I wouldn’t say that any of the puzzle solving in the game is particularly challenging as most are really straightforward. Even some of the challenges are pretty easy.

Not all of the challenges are easy though. It might be pretty obvious what you have to do to proceed, but in action it is not so easy. There will be some challenges in the game that you will have to restart a lot due to failure. This can be attributed to a couple things. First while the game has no time limit, there are plenty of times in the game where you can’t take your time if you want make it past a challenge. In these challenges you need to move quickly and precisely or you likely will fall into a pit. Otherwise most of the difficulty comes from having to work well with your teammate. In the single player game you will have to work with computer controlled robots and in co-op you will have to work with the other player.

Working well with your teammates is crucial in the game. There are many challenges in the game where you can’t succeed if you don’t work well together. For example many times in the game there will be platforms which change between two different colors. These platforms will only accept the leg of the robot of the current color. If the other robot puts down a leg on one of these platforms it will disappear dropping any robots currently on the platform. To succeed you and your teammate need to work together to alternate moving your legs to keep the platform in place. This is just one example of the challenges where you have to work well together in order to succeed. Especially in the later levels there are plenty of unique types of challenges that require good teamwork in order to succeed.

While Biped has a single player campaign, which I will get to shortly, Biped was a game that was designed for co-op. The game is still fun in single player, but working with another player just makes the game more enjoyable. If you aren’t on the same page it will lead to some spectacular fails. When you get things right though it is really satisfying being able to beat a level working with another player. Especially in the later levels the game comes up with some clever ways of forcing you to work with your partner that can’t be replicated in the single player.

I brought this up a little in the preview but I think it warrants another mention. The game’s style may not appeal to everyone, but I found it to be really cute/charming. From the robot designs and other elements you encounter throughout the game it is hard not to like the game’s charming atmosphere. The game’s story is kind of lacking as it basically involves just reactivating the different beacons. It is easy to get past that though because a lot of effort was put into exploring the world by making it so charming.

There are a lot of things that I really liked about Biped as it is a great game. The gameplay may seem a little simple at first, but it is creative and really fun. I had a blast playing the game and people who think the premise sounds interesting should as well. The game does have a few flaws though.

The first issue is something that I brought up in my preview of the game. While the controls in the game are good for the most part there is the potential for some issues. If you have a newer controller or one without any issues you should have very few issues with the controls. There are a couple occasions where the physics/legs don’t work quite how you would expect. These issues are usually pretty minor though. Most of the problems come from when you have older controllers. The problem is that the movement of the legs depends on you moving the corresponding analog stick in the direction you want the leg to move. To put the leg down you just need to let go of the stick and the leg is immediately placed down on the ground. With a good controller this is no issue. If your controller sticks sometimes though or doesn’t automatically return to the middle when you let go of it you will have trouble putting down the robot’s leg. As one of my controllers had this issue while the other didn’t this was sometimes pretty frustrating. We died quite a few times as I tried to adjust to the leg not always going down when it should. I think the game really needs to add some sort of sensitivity setting where the stick doesn’t have to return directly to the center in order to put the foot down.

Another issue is that the game adds quite a few interesting new mechanics and then just seems to forget about them. These mechanics were fun to use and yet many were used once and then never used again. I think the game could have reused some of these mechanics in order to add more content to the game. I always find it a little disappointing when games do this as they introduce an interesting and fun new mechanic and never utilize it to its full potential. I really wanted to see what other ways that some of these mechanics could have been used in the game.

The main reason why I think this is a problem is because Biped is on the shorter side. The game has a total of eight main levels. Most levels will take at least 15 to 30 minutes especially for your first attempt. If you replay a level it should take considerably less time though as the bonus for beating the levels are generally given out for times between five to ten minutes. If you play through the single player campaign it should add a decent amount of replay value. In addition to the normal levels the game also has a set of challenge levels. Each level appears to also have two challenge levels. These challenge levels basically consist of a couple more difficult challenges that test the skills that you learned in the main levels. These can provide quite a bit of challenge and I enjoyed them. Outside of their difficulty though they are considerably shorter than the main levels. Otherwise the game has stars to collect which can add some replay value to the game. I wish the game was longer, but that was mostly because I was enjoying the game so much that I didn’t really want it to end.

In my preview two weeks ago I expressed high expectations for Biped. For the most part the game lived up to those expectations. In the game you basically have to move your robot by controlling each leg individually. This is used to make your way past various obstacles and solve pretty basic puzzles. Most of the gameplay comes from working with a teammate as many of the challenges require two players to work well together. The game really succeeds at creating an engaging co-op experience as it is crucial to work together. Biped’s single player mode is satisfying as well though. Overall I found the gameplay to be really fun as the premise may be simple but the designers did a really good job using those mechanics to create fun challenges. The only real complaints that I had with the game is that the controls are sometimes finicky if you are using an older controller and the game is on the shorter side. The game is not super short, but I just wish it was longer mostly because I was really enjoying it when it ultimately ended.