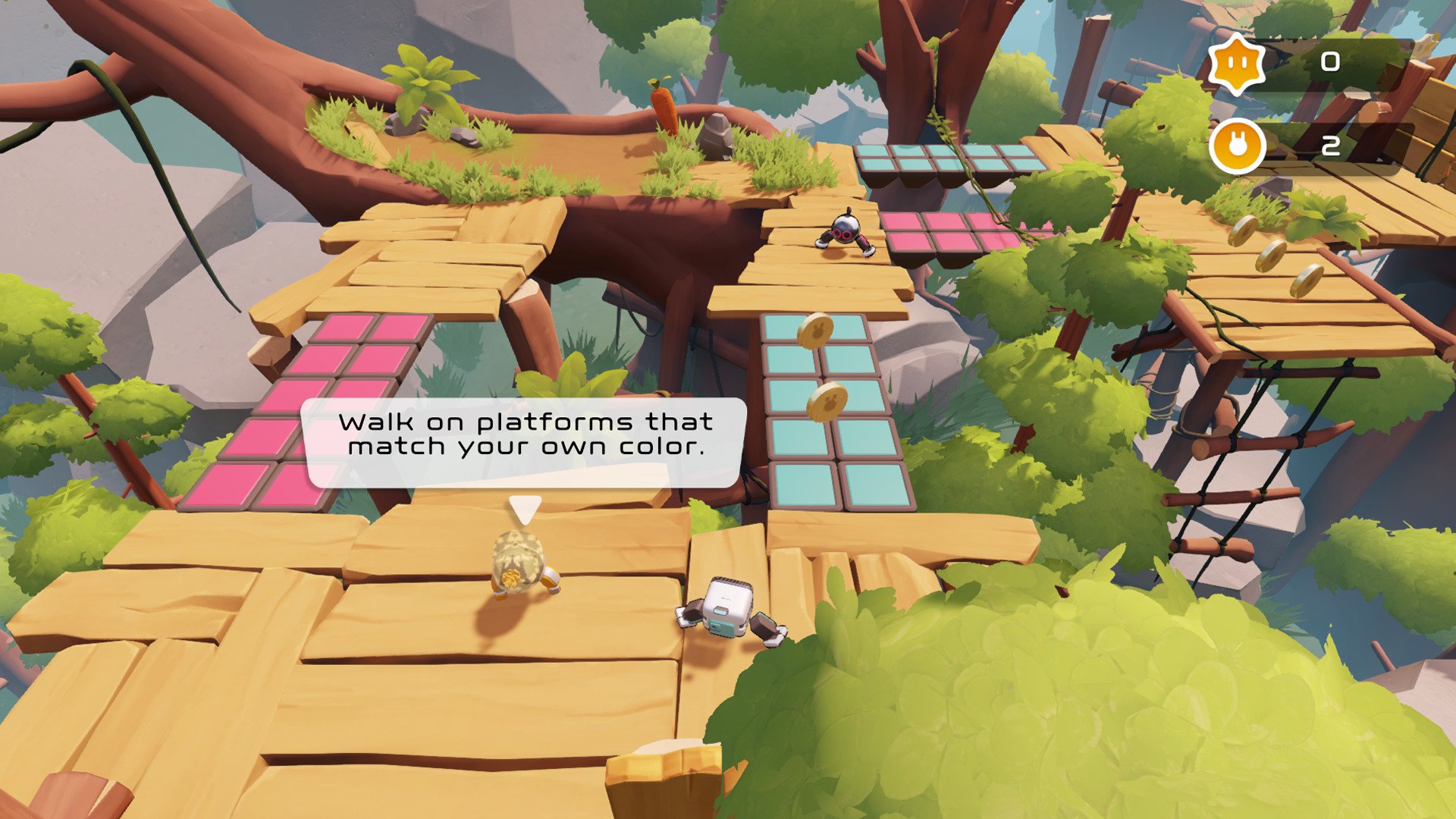 One of the best things about the rise of indie video game studios is that it has brought out a lot of creativity in the industry. Instead of just seeing the same type of games over and over again, new genres have been created and developers have more freedom to take chances. One subgenre that has developed in recent years is games that force players to control each limb of their characters independently. The gameplay mostly involves figuring out how to get all of the limbs to work together in order to perform a basic task such as walking. I bring this up because the game I am looking at today is based around a similar mechanic. As the game’s title implies in Biped you play as two legged robots whose two legs are controlled independently of one another. This on its own would have intrigued me. When I saw the game’s cute atmosphere and the fact that the game was built as a co-op experience I knew I had to try it out. Biped takes some time to get used to, but once you do you are left with a charming co-op experience that is a real delight to play.

In Biped you play as Aku and Sila. After a solar storm knocks out all of the communication beacons that your ship is monitoring you are sent to the planet to fix them. To reach their destination Aku and Sila must work together in order to get past the obstacles that stand in the way of reaching the beacons that they need to fix. Can you and a partner work well enough together to fix the beacons in time?

So before I get too far into my thoughts I want to start out by saying that this preview is based on a preview build of the game. The preview build seemed to be in a finished state, but it only contained a few of the levels. I want to make note of this as my preview is only based on these first couple of levels. I don’t know anything about the later levels in the game so I can’t comment on the length of the game or how the gameplay holds up past the first couple of levels. This preview should be treated as more of a first look than a full preview.

It is kind of hard to describe exactly what Biped is like as it doesn’t really fit into any of the traditional video game genres. The main gameplay involves you controlling one of the two robots with the objective of making it past all of the obstacles that stand in the way of you reaching the beacon at the end of the level. These robots have two legs that work independently of one another. If you are using a controller one leg is controlled by each analog stick. To move a leg you move the corresponding stick in the direction that you want to move it. When you let go of the stick the leg will be planted on the ground. To move your robot you need to switch off between moving the two legs. In addition to moving you will use your robot’s legs to grab onto objects and move them.

If just making your way to the end of a level wasn’t difficult enough you will also have to use your legs to solve various puzzles along the way. These can vary quite a bit. Some involve you properly timing when to move your legs. Others have you stepping on buttons or activating switches in a certain pattern. As I played just a preview build of the game I wasn’t able to see all of the ways that the mechanics could be used for the puzzles. Based on what I have played though there are already quite a few different ways that the leg mechanics were used in order to solve puzzles.

Based on the preview build I am really enjoying Biped. The game actually reminds me quite a bit of other games that are built around having to control all of the individual limbs of a character. While it shares a lot in common with these other games I actually think it controls quite a bit better. Many of these type of games rely on the humor of your carefully crafted plans failing miserably because the controls let you down. It does take some time to get a hang of moving characters in Biped, but the game deserves a lot of credit for making the controls easy to use. While the game has mouse controls I played with a controller which is the preferred method of playing the game. One leg corresponds to each analog stick so with a little practice it becomes pretty easy to move your character around. Your first steps may take some work, but you will soon be moving along at a pretty brisk pace.

Without the intentionally bad controls of many games from this genre Biped is not as silly as the other games. Biped makes up for this though with the fact that the gameplay is really fun. The movement mechanics take some time to get used to, but they are quite satisfying to use. When you get to the point that you can walk around comfortably it is satisfying being able to quickly move around the levels. This is combined with some fun puzzle platforming mechanics. While you can’t jump in the game (outside of walking on springs) the game still kind of feels like a platformer as you need to use the walking mechanics to avoid obstacles and move between platforms without falling down pits. This is combined with the puzzle elements. While the puzzles are pretty easy to solve, most of the challenge comes from performing the required actions which is more difficult due to only being able to use one leg at a time.

This may not make a lot of sense but while playing Biped it kind of reminded me of the classic 3D “mascot platformer”. Obviously the game has no jumping, but the overall feeling is similar. I think this is due to a couple things. First I love the game’s overall theme/atmosphere. The game’s art style and characters are really cute/charming. Some people may think the game looks kind of kiddy, but I really liked the style. The graphics look nice and the game oozes character. The little robots you meet along your journey are really cute and bring a charming atmosphere to the game. Otherwise the game just has a late 90s to 2000s platformer feel to it. The game has various challenges to complete with regards to completing a level within a certain amount of time or under a certain number of deaths. The game also has collectibles to find in each level which are either hidden or are rewards for completing additional puzzles/challenges. The game also has a bunch of coins which can be used to buy costumes for your characters.

The game’s developers are really pushing the game as a co-op game and they should as it was meant to be a co-op game. Instead of players just doing their own things the game features a lot of puzzles where players actually have to work well together if they want to succeed. Fans of these type of co-op games where players need to work well together should really enjoy Biped as it was built around being a co-op experience. What I was a little surprised by was that the single player was better than I expected. In the single player mode you only control one of the two robots. Having only one robot meant that the single player levels include some different puzzles than the co-op game. The overall levels seem similar but there are some tweaks to the puzzles. While I would recommend first playing the game with a partner, this actually adds some replay value to the game as you could replay the levels in single player to get a different experience.

So far I have really enjoyed the game. I will admit that the game is probably not going to be for everyone though. The game requires some coordination as you need to figure out how to move the two legs together in order to walk properly. Some people will probably struggle with this which will make the game kind of frustrating. If you don’t generally like these type of games I don’t know if Biped will be for you.

Outside of the gameplay mechanics not being for everyone the other issue I encountered with the game is that the controls can be a little sensitive at times. This won’t be an issue for most players. If you are using an older controller though you may experience some issues. When I first started playing the game I used my typical PC controller which is getting up there in age and thus the analog sticks can occasionally stick in position. Due to how the game handles the leg movement this created issues for the game as it was hard to move at times. Unless the analog sticks return to their original positions when you release them the game registers it as you still moving the leg. This means that you manually have to manipulate the stick to be in the center for the robot to put their leg down. I eventually switched to a different controller and it was much easier to move the robots meaning that the issues were with my controller. If you have a newer controller that is still really responsive this won’t be an issue. If you have an older controller that sometimes sticks though you may encounter some issues. For this reason I wish the game could include a setting where you could turn down the sensitivity as the legs are sometimes too sensitive.

While I was only able to play a portion of Biped what I was able to play really impressed me. Biped’s atmosphere is so charming where I think it will really appeal to children, but should appeal to adults as well. It takes some time to get used to and can be a little too sensitive at times, but I found the gameplay to be really fun. Just coordinating your robot’s two legs to work together to get a somewhat regular walk going is really satisfying. In addition to avoiding obstacles you need to use this mechanic of moving each leg independently in order to solve puzzles. The puzzles are pretty easy to solve, but actually completing the required actions is quite a bit more challenging. I had a lot of fun with what I have been able to see so far of Biped and I am interested in seeing what else the game has to offer.

If you have never really been into the genre of video games where you have to control each of your character’s appendages separately, Biped probably won’t be for you. If the game’s concept intrigues you though and you like good co-op games with a charming atmosphere you should really enjoy your time with Biped.