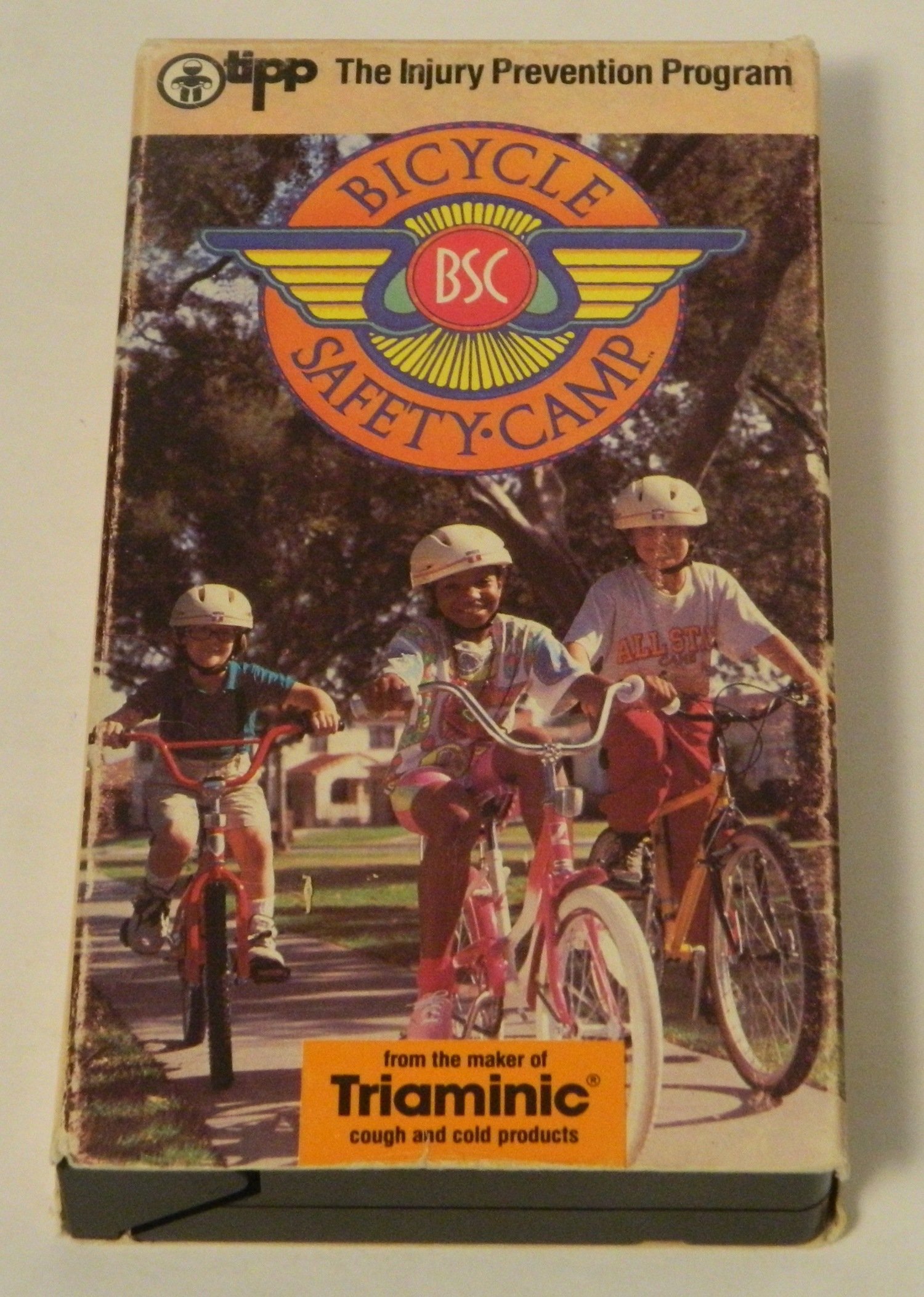 While the last two VHS tapes I covered in this column had their moments, I was ultimately disappointed by them as they were nowhere near as unintentionally funny as they seemed like they would be based on their covers. I decided to turn to one of the genres of VHS tapes that is almost always hilarious to make fun of; safety/instructional videos meant for children. This genre is almost always incredibly dated and full of terrible acting (and singing and dancing in some cases). With a mini slump going on, I went with the almost surefire hit called Bicycle Safety Camp. After a very strong start that had me laughing out loud on several occasions, I thought this VHS tape would be my next hilarious find like Chuck E. Cheese in the Galaxy 5000. Unfortunately, Bicycle Safety Camp can’t keep the humor going and after the midpoint of the 25-minute run time, it becomes much less funny. The beginning is so awkward and funny though, that it probably is still worth a watch. Of the four VHS tapes watched for this series so far, it is the second best (after the amazing Chuck E. Cheese in the Galaxy 5000 of course) despite the lack of informational value and the boring second half.

Bicycle Safety Camp starts out amazingly with an awful (but also hilarious for viewers like me who like bad music in their terrible VHS tapes) late ’80s rap song to introduce our child characters (who of course are mostly stereotypical archetypes like the nerd and jock), who have all been banished to a bicycle safety camp due to their various bike-related misdeeds. Boomer (the athlete), Julie (the fashionista girl), Rita (the bland character who’s barely in it), Arthur (the geek), and Rebop (what kind of name is that by the way?) are our five bad bikers. They are stuck there with the bizarre bicycle safety instructor (who goes by the name of Sam Sprocket) until they can pass his course and earn the right to ride a bicycle again. Sam (played by Jim Pirri, an actor with over 100 credits on IMDB) is quite the character. The first time we see the guy, he runs onto screen like Sonic the Hedgehog with some horrendous special effects to make him look like he’s running super fast. He can also materialize items like bike helmets or a magical TV out of thin air.

Sam then teaches the kids basic bike safety through three songs of varying quality. The first song is by far the best as Sam is a terrible rapper and an even worse dancer (seriously, if you ever find Bicycle Safety Camp look at his “sweet” moves of spreading his legs way out and then slightly moving them). Bad songs are one of the things I look for in instructional videos as they almost always make me laugh out loud and this one certainly qualifies. Undoubtedly, failing Sam Sprocket’s test will also force them to listen to the horrible rap song again. That’s reason enough for these kids to make sure they ace the exam. This is followed by a decent though unremarkable song (“Check Out Your Bicycle Before You Ride”), which I laughed at a few times but already forgot about two hours after I had watched this video. The last one is probably the most informative for kids but is also the least funny to make fun of. “Stop. Stop. Look All About” just isn’t very catchy or funny and all of the unintentional (and sometimes intentional) humor is lost here. From this point on, there is almost no humor until the very end of the video where another hilarious moment finally materializes. All I can say is, what kind of drugs did they give Sam Sprocket at the end. Based on his “silly walks” and gestures, he was definitely on something. While the tape teaches you that the most important rule of bicycle safety is wearing a helmet, I would actually argue that it is staying away from Sam Sprocket, especially when he is acting maniacally like at the end of the tape. Weirdly, he wasn’t that creepy of a character until this moment (outside of some slightly creepy moments with Arthur and “I LOVE these kids” doesn’t sound very good if taken out of context) but that is completely changed as we watch an obviously unhinged maniac walk away.

As one of the kids that this tape might have been geared towards (though I was a bit too young for a bike back in 1989), I’m not sure what I would have thought about this if I watched it as a kid. I think it would have been reasonably entertaining, but also kind of cringey even for children back then. Today’s kids will just make fun of the outdated stuff and the awful songs included but it probably would have been much more valuable back in 1989. Nowadays, it doesn’t really have any value as an actual instructional video as it is pretty outdated information wise and extremely outdated from an entertainment standpoint. A lot has changed since the late ’80s as there are a lot more hazards and safety tips that today’s kids will have to learn that aren’t covered in this video.

Sam Sprocket is easily the highlight of Bicycle Safety Camp. Between his craziness at the beginning and end of the video and his horrible rapping and dancing, there’s a lot to make fun of when it comes to this character. The actor is actually pretty decent (as I wrote earlier, he has had an extensive career spanning movies, TV, and video game voice roles). Sam can be a bit creepy at times but thankfully, he isn’t one of those creepy instructional video characters that make you afraid for the child characters (another staple of these instructional videos for children through one that is often incredibly uncomfortable to watch). Surprisingly, in addition to Pirri this video also helped launch the career of one of the child actors. Arthur’s actor Joey Simmrin would go on to perform in a half-dozen or so ’90s and early ’00s films (including Little Giants and Clockstoppers among twenty other roles).

However, Sam Sprocket is not the only source of entertainment in Bicycle Safety Camp. There’s also some intentional humor that actually works including a “cow person” when Sprocket warns a kid about watching for animals on the road. There’s also a few of the quickest animations I’ve ever seen (they’re like five frames each). I had fun laughing at how quick of a paycheck it must have been for the guy in charge of them. One thing missing in this safety video that often leads to hilarity is the omission of any comically staged near-accidents. While these can also be sad or awkward to watch, sometimes they are also the funniest moments of these VHS tapes because of how horribly staged they are.

If you do find Bicycle Safety Camp at a thrift store for under $1, it might be worth a pickup as there are some genuinely funny moments of unintentional comedy (mostly due to Sam Sprocket). Just beware that the middle part of the tape is rather boring. Once you get past the second song, you can probably just skip right to the credits (which you should watch as it contains one of the funniest scenes) and you’ll see all of the funny moments of the tape. I wouldn’t go out of my way to buy Bicycle Safety Camp, but if you find it for cheap and you like poking fun at safety and instructional videos it’s probably worth watch.

Next time on VHS Files: Get ready for Halloween with Bobby Goldsboro’s Lumpkin the Pumpkin, one of the most horribly animated pieces of entertainment I’ve ever seen.