The original Balderdash was created back in 1984 and is generally considered a classic party game. Based on the public domain game “Dictionary”, the goal of the game is to bluff the other players with their own definitions of obscure words. Nine years after it was first introduced, the designers decided to make a sequel to Balderdash known as Beyond Balderdash/Absolute Balderdash. Instead of just guessing definitions of words; players could guess the importance of a date or person, what a set of initials stand for, or even the plot of a movie. Being a fan of the original game I welcomed these additions as they seemed like they would add more variety to Balderdash. Beyond Balderdash is the perfect example of what a board game sequel should be, it takes everything you like about the original game and adds to it to make an even better game.

How to Play Beyond Balderdash

Each round of Beyond Balderdash begins with the current dasher taking a card. The dasher will then choose which category will be used for the round. The player can either choose the category they prefer or they can roll the die and choose the corresponding category. If the player rolls a six, they can choose the category. The different categories in the game are as follows: 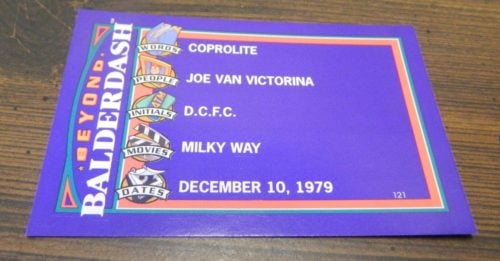 For this round the movies category was chosen. The players will have to write down what they think the plot of Milky Way is. 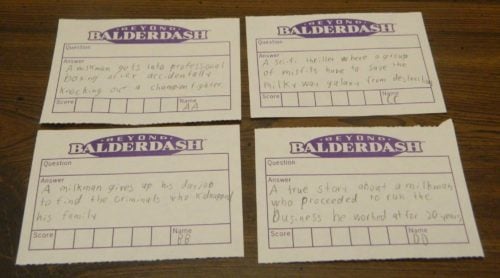 The players have provided their answers for the question of what the movie Milky Way is about.

The players then proceed to voting. Starting with the player to the left of the dasher, each player guesses which answer they think is correct. After everyone (except for the dasher) has made a guess, the dasher reveal the real answer. Players will score points based on how the players voted. 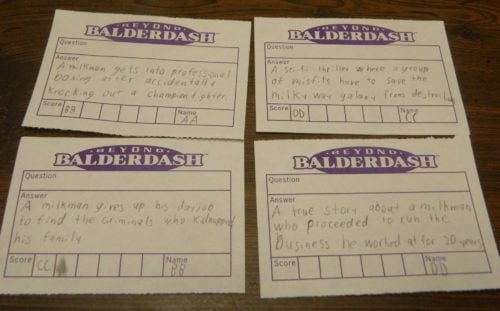 Starting with the player to the left of the dasher, each player moves their piece forward spaces equal to the number of points they scored. If a player lands on the “double score” space, they will score double points on their next turn. 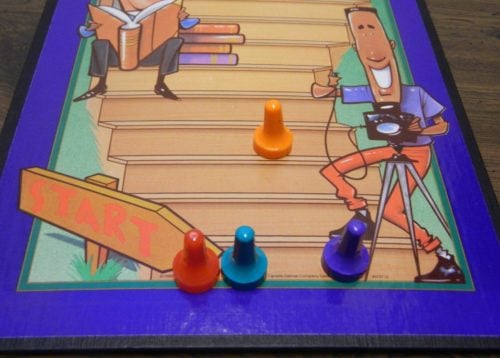 The orange player scored three points in the round. They will move their pawn forward three spaces on the gameboard.

After the scoring is completed and no one has won, another round is started. The player to the left of the previous dasher becomes the next dasher. 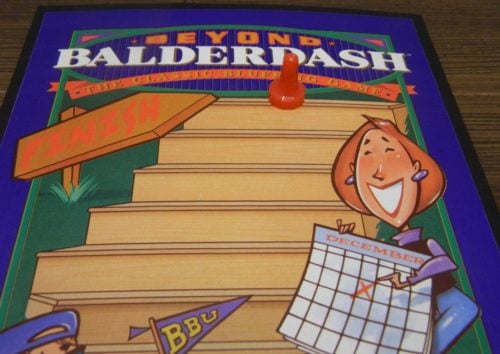 The red player has reached the final step so they have won the game.

If you are only playing with two players, the rules change quite a bit. The dasher will draw three cards from the deck and they will pick a category (can’t pick the initials category). The dasher chooses one of the three cards to be the round’s card. They read out the question on the chosen card and then the answers to the corresponding category from the three cards. The other player then chooses which answer they think is correct. If they are right, they score two points. If they are wrong, the dasher scores one point. The players alternate being the dasher. The first player to reach the finish space wins the game.

My Thoughts on Beyond Balderdash

For the most part I liked the new categories included in Beyond Balderdash. They all bring something new to the game and they add quite a bit of variety. I would probably say that the people and date categories are the two I liked the least. It was just harder to come up with good fake answers for these two categories as players tended to just pick a historical event and tied them to it. The abbreviations category works pretty well as it is pretty straightforward to come up with an answer. I think my favorite though was the movie category as it was fun coming up with random movie plots based solely off of a title. While I preferred some categories over others, I thought they were all valid additions to the words from the original game.

Like the original Balderdash, I really enjoyed Beyond Balderdash. While I wouldn’t consider it to be my favorite party game, I have never played a game of Balderdash or Beyond Balderdash and not enjoyed it. There is just something about the game that makes it a classic party game. I think the main reason that the game is so successful is that it is so simple and straightforward. As long as you are old enough to read and write, you can play the game. Younger kids may have trouble coming up with believable answers, but they should have no trouble playing the game. The rules take just a couple minutes to explain and whether you play a lot or few board games, you should have no trouble playing the game.

The other reason I think Balderdash is so successful is that it kind of feels like a non-traditional trivia game. Each question in the game actually has a correct answer and thus can be seen as a trivia question. The answers submitted by the other players along with the correct answer become the multiple choice answers.  The questions are generally so obscure though that the players will rarely know the answers. The words for example are the type of words that you would only know if you work in the associated field or are a real wordsmith. The same applies to the new categories in Beyond Balderdash. At first you would think this is a bad thing.

While you could play Beyond Balderdash seriously, there will usually be at least one silly answer for each question. Sometimes the silliest answer is actually the correct answer. These silly answers generally illicit some laughs. When developing your answer, you don’t want to go so odd that no one will believe your answer. You need to come up with something somewhat random though as rarely are the answers what you would expect. It is hard not to laugh at some of the completely random things that players can come up with.

As far as skill versus luck, I would say that Beyond Balderdash tends to lean a little more towards skill. There is a technique to writing good answers in the game. You need to come up with something pretty random as most of the actual answers come out of left field. You also need to provide enough details as the correct answers are usually not vague. At the same time you don’t want to provide too many details. The correct answers are written in a certain way so if you can emulate the style it will be easier to trick the other players. There is still some luck to the game though. You could come up with the perfect fake answer and even do a good job guessing the correct answer, and still not win the game. To do well in the game you have to rely on other players choosing your answers. Sometimes it doesn’t matter how good your answers are as players for one reason or another won’t pick them. Some players are going to have an advantage in the game, but most players should have a chance of winning at the start of the game.

While I really liked Beyond Balderdash, there are a couple things that I think the game could have improved.

First I don’t like how the game handles voting. In Beyond Balderdash the players take turns making their guesses starting with the player to the left of the dasher. As players reveal their guesses out loud, players will receive additional information before voting. If a player votes for an answer it usually means that they didn’t submit that answer. Players can technically vote for their own answer but for the most point I don’t think it is worth it. Maybe if you are playing with a lot of players it might pay if you can trick three or more players. If you can’t trick a lot of players though, you are better off just trying to guess correctly as if everyone guesses incorrectly the dasher scores three points.

The second problem that I had with Beyond Balderdash is that I don’t like the game board. Just like the original Balderdash, I see no real point for the game board. The game board feels like an unnecessary component and mostly just adds more luck to the game. The double point space in particular is stupid as you shouldn’t get extra spaces just because you were lucky enough to land on a specific space. I also don’t like that a player can ultimately win the game because they were able to move their playing piece first.

Beyond Balderdash should have just used a score pad instead of the game board. The game would be played the same except that each player’s score in each round would be recorded. The players would play a chosen number of rounds and the player who scored the most points would win the game. This would eliminate luck from the game board as each player would be the dasher the same number of times. The winner would solely come down to who scored the most points.

The final issue with Beyond Balderdash is that the game can go a little long at times. Unless one player dominates, I would guess most games will take at least 45 minutes and a lot of games would take longer than an hour to complete. I personally think that is a little long for the type of game that it is. The game would be better at 30-45 minutes. While I don’t like to rush players, I think you should implement some sort of time limit to submit answers as otherwise the game can kind of drag. This is worst for the dasher as they mostly have to just sit around waiting for the other players to finish writing their answers. Unless you have a lot of players I would recommend letting the dasher submit their own answer so they have a better chance at scoring points, and they won’t have to sit around so long for the other players.

Finally I want to quickly talk about the game’s components. The component quality for the most part is quite average. The game’s artwork is fine for the most part. The gameboard and playing pieces are pointless as I think you would be better off just ditching them entirely. While you could easily just use pieces of paper, you will run out of the answer sheets pretty quickly. For the most important component though, the cards, I was impressed with Beyond Balderdash. The game has around 500 cards which is quite a few as there are five categories on each card. You could theoretically play 2,500 round before ever repeating a round. I don’t think you would ever have to worry about running out of cards in Beyond Balderdash.

Should You Buy Beyond Balderdash?

If you would like to purchase Beyond Balderdash, you can find it online: Amazon