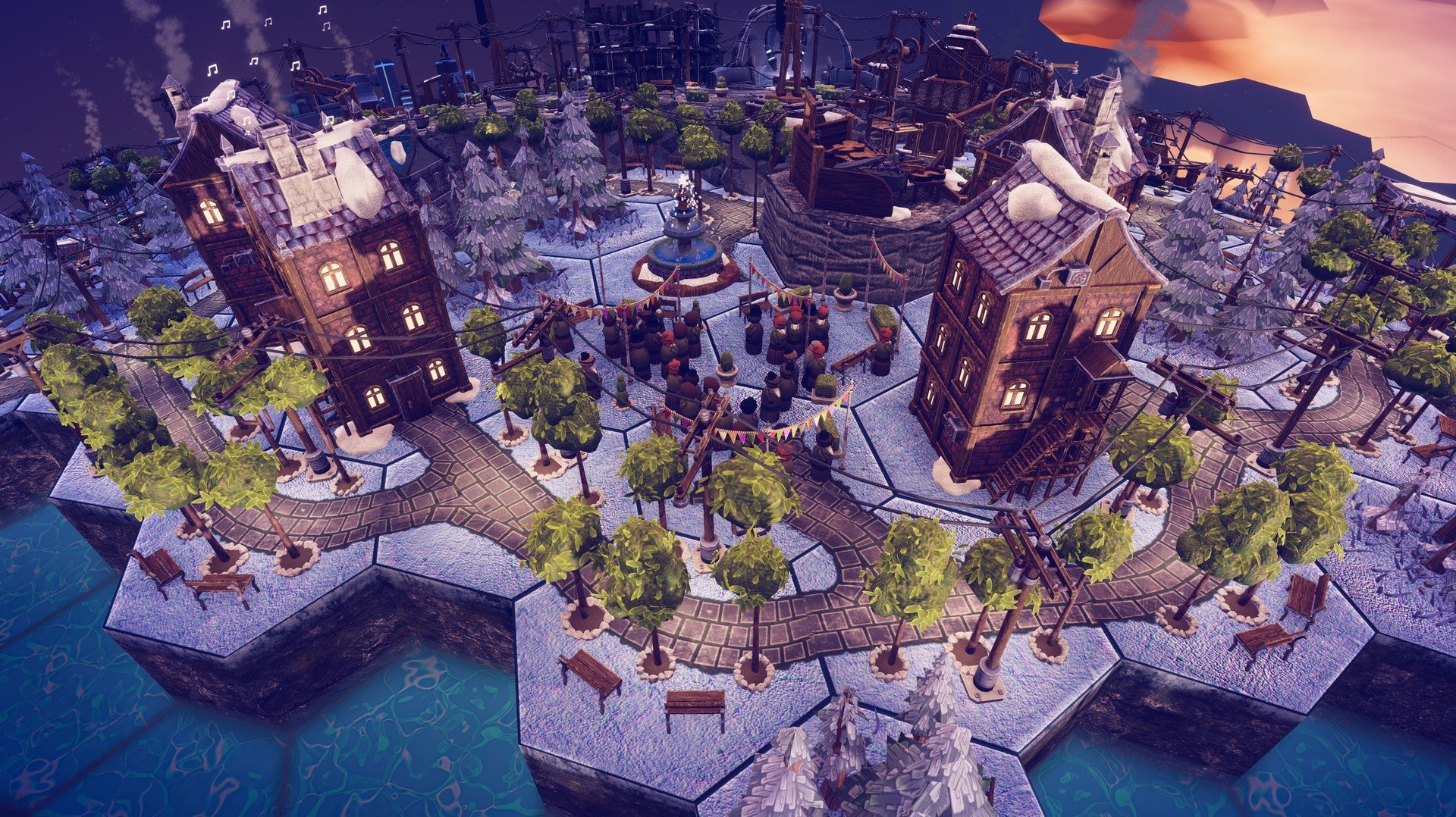 Released today I was intrigued when I first saw Before We Leave. The game’s graphical style was what first attracted me to the game. I was also intrigued though because I have always been a big fan of the city builder/logistics genre. If that wasn’t enough there was the fact that the game decided to eliminate combat entirely which is something that I have never been a big fan of in this genre. Because of all of these reasons I was really excited to try out Before We Leave. Before We Leave is a charming, fun, and relaxing take on the city builder genre that fans of the genre should enjoy.

The story of Before We Leave takes place in the distant future. Your peeps (the inhabitants of the game’s world) entered underground bunkers generations ago after they ruined their planet. The peeps have finally decided to leave the safety of their bunkers to try and recolonize the planet. As they leave the bunkers they find a world littered with the remains of their ancestors’ world. Can you rebuild the peeps’ world and expand to new planets while avoiding the failures of their ancestors?

Before We Leave’s gameplay is for the most part pretty similar to your typical city builder. When you begin a new game you will start with a basic town hall and a number of peeps that have just left the bunker. From here you need to build a new civilization from scratch for the peeps. You will begin by creating some lodging for the peeps as well as some farms and wells to provide for their most basic needs.

With the necessities out of the way you will move onto gathering resources to try and advance your civilization. This includes gathering remnants of the lost civilization which is used to upgrade new technologies. You will also start gathering wood, stone, and iron to start building basic tools and manufactured goods. Once you have the basic manufacturing framework in place, you can proceed to building more complicated goods. This also allows you to build ships to colonize other islands and eventually other planets.

What is kind of unique about Before We Leave is that the game has no combat/conflict. You don’t have to fight against other groups for resources or to protect your own people. Instead the game has a much greater emphasis on just trying to build a better world. You need to focus on the planet itself and the happiness of your people. Pollution plays a role in the game as it makes your people unhappy which slows down their work. As your population grows, your peeps start seeking better lives for themselves which means they desire more variety in food, better clothing, and other goods to make their lives more enjoyable. Instead of fighting outside threats, the main thing you have to overcome in the game is trying to keep your peeps happy.

It might initially sound like the game may be a little overwhelming, but it really isn’t. Basically to place a building you just choose what building you want and choose an unoccupied hexagon. The only other requirement is that all buildings must be placed next to a road. While the game has quite a few different types of buildings, this isn’t overwhelming as the game’s tutorial is quite good. It does hold your hand a little as it guides you through building a civilization, but it does so in a way where it is still engaging rather than a lecture.

On the topic of difficulty, I don’t know if I would consider Before We Leave to be a particularly challenging game. With no conflict your civilization really can’t be destroyed. You could make mistakes which will make your peeps unhappy, but you should be able to remedy those situations pretty easily. Honestly the easiest way to get in trouble in the game is just to move too quickly. Before you expand to more complex buildings and goods, you want to build a good framework that will provide you with the basic resources you need for everything else. You want to do this so you avoid getting stuck in a situation where you can’t proceed. If you can avoid this situation you shouldn’t really have anything to worry about as you can relax and play the game without worrying too much about making a mistake.

Those looking for a really in-depth city builder may be turned off by this. Before We Leave is more streamlined than some of the more complex city builder games. This may mean the game won’t be for everyone, but I consider it a strength for the game. This along with not having to worry about conflict means that Before We Leave is a game that you can just relax and play.

As a fan of city building games, I really enjoyed playing Before We Leave. Like most games in this genre the game is all about resource management and creating a well run logistical system/supply chain. The peeps handle a lot of the micromanaging on their own as you don’t get to directly tell them what to do. You can prioritize which workplaces are most important and where resources are stored. The peeps then handle everything else. There is still a lot to creating a successfully run civilization though. Most of the buildings have positive and negative area affects so it matters where you place things. Certain buildings can also only be placed on certain types of tiles as well. To maximize the happiness and effectiveness of your peeps you need to have a plan for how you place your buildings.

This is expanded further because each planet is divided into a number of islands. Each planet has their own types of resources and tile types. While some islands could maybe be made self sufficient, you usually will have to create a trading network between islands/planets that allow you to have each island specialize in creating different types of resources. You will then transport goods between islands to get them where they are needed.

While these elements of the game are not drastically different than a lot of games from this genre, Before We Leave is still a really compelling game. It is fun expanding your city and creating a well run system. Instead of focusing your expanding power on defeating enemies, the main focus of the game is just trying to create a better life for your peeps while also growing in size and advancing technologically. If you are a fan of this city builder genre, I think you will really enjoy the game just like I did.

On top of the gameplay, I just really liked the overall atmosphere of Before We Leave. It is kind of hard to describe the game’s art style as it feels one part realistic and one part like you are playing with a large toy set. The peeps in particular look like little toys especially with how they move around. Outside of just the cute style, the graphics actually look really nice. As your cities grow it is enjoyable looking at what you have built. On top of this the game’s music is also really good. The game does a really good job creating a cute and charming atmosphere that really adds a lot to the game in my opinion.

I really enjoyed playing Before We Leave. The one thing that I am a little concerned about though is the game’s replay value. The game doesn’t really have an endpoint so you can’t really “beat” it. Instead the objective of the game is to just expand your civilization to additional planets and create a more efficient system to keep all of your peeps happy. After you are satisfied with the civilization that you have created, all you have left to do is to start again from the very beginning with a different group of peeps. So far I really haven’t hit any moments where the game became repetitive, but I am a little cautious about the game’s long term replay value. Building your civilization is fun, but the main gameplay doesn’t really change all that much. If you are the type of player that isn’t a big fan of restarting over again from the beginning to try and create a better run civilization, I am not sure how much replay value that the game will have to offer.

As a fan of the city builder genre, I had pretty high hopes for Before We Leave as it looked really cute and charming. While the game may be on the easy side and not as deep as some other city builders, I still really enjoyed the game. As there is no combat in the game, it has a unique take on the genre as the gameplay is mostly about expanding your civilization and keeping your people happy. I found this really satisfying as it is fun to create a well run logistics system. I am a little worried about the game’s long term replay value though as you mostly just do the same things throughout the entire game.

My recommendation comes down to your feelings about city builders and Before We Leave’s overall premise. If you don’t typically like the genre or want a really deep and complex game, Before We Leave may not be for you. Those that want a fun and relaxing city builder though should really enjoy Before We Leave and should consider picking it up.

Buy Before We Leave online: Steam