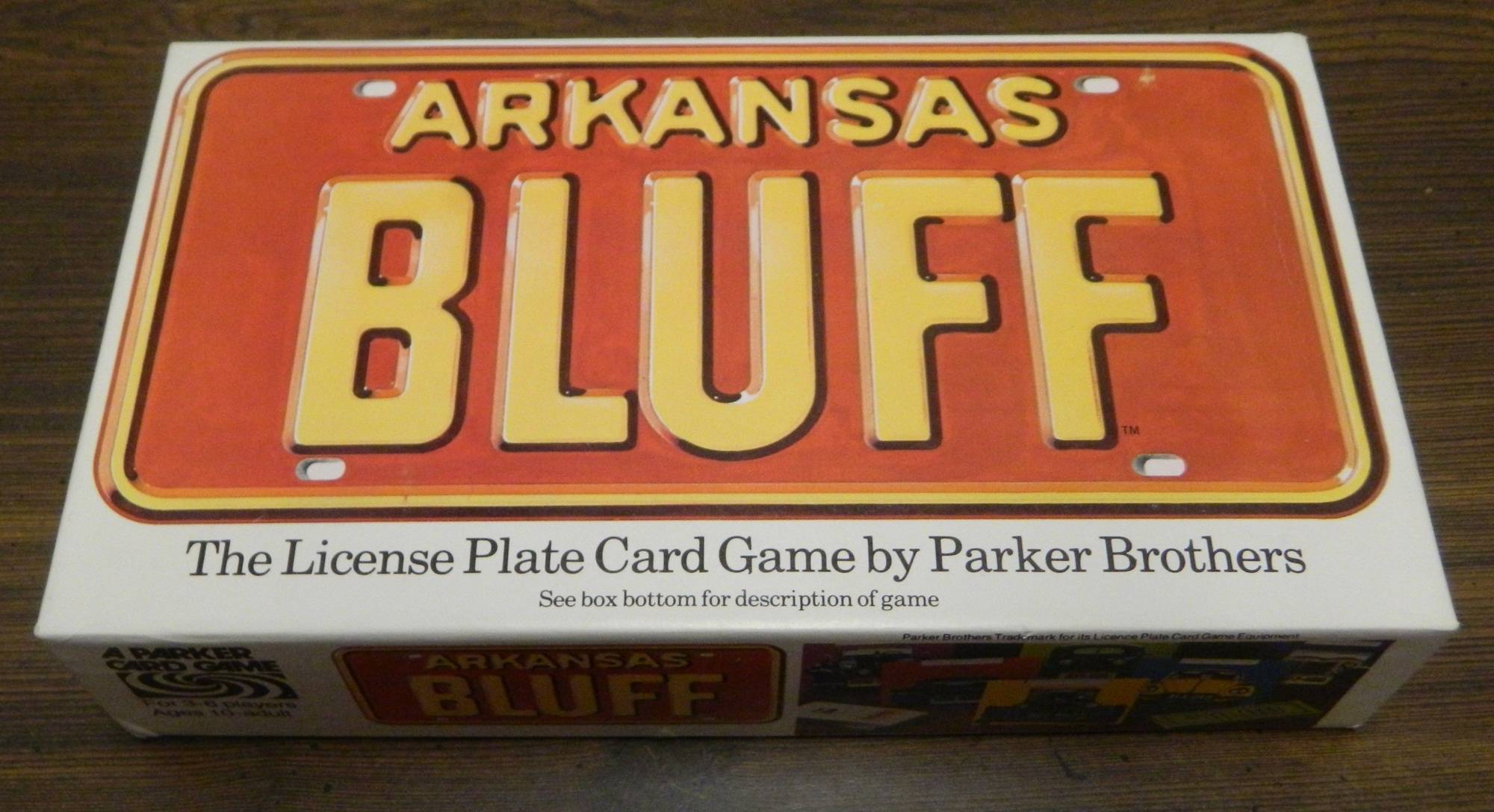 The Liar’s Dice line of bluffing games is one of the most popular and well known public domain dice games of all time. It currently stands as one of the 600 best board games of all time. While there are things that I liked about Liar’s Dice, I was disappointed by it as there are things that I think could have been improved. With how popular the game is it is not surprising that companies have tried to create their own versions of the game to make a quick buck. One of these games is Arkansas Bluff which changes out the dice for cards while also adding in a car theme. As I wasn’t a huge fan of Liar’s Dice I can’t say that I had high expectations for Arkansas Bluff. Arkansas Bluff may have its own problems but it improves Liar’s Dice in a couple key areas.

How to Play Arkansas Bluff

The game is played in rounds. In each round players are trying to guess how many of a specific number will appear on each player’s current card and the top card on each pile in the center of the table. The current player starts the round by making an opening bid. The player chooses a number and how many times they think that number will appear on all of the cards for the current round.

After the opening bid is made a player can take one of three actions on their turn:

The bidding continues until one player makes a bid and all of the other players either challenge or agree with it. If all of the players agree with the current bid, the player who made the bid can choose one of two options. They can choose to raise the bid which forces the rest of the players to once again agree with the bid or challenge it. The player can also choose to cancel the round and no one makes or loses money in the round. The next round then begins.

If at least one player has challenged the bid, the players will proceed to scoring.

Each player removes their card from their holder and places it in front of them so everyone can see them. The top cards from the center piles are also flipped over. The players will count up how many times the number that was bid appears on all of the cards. The bid is met if the number bid appears as many or more times than was bid. For example if the bid was five eights, there needs to be five or more eights between all of the cards for the bid to be met. If there was less than five eights, the bid was not met. Players will receive money depending on whether the bid was met.

When a round is finished all of the cards used in the round are discarded. If the players still have cards left, another round is played. The player to the left of the player who started the last round will start the next round.

The game ends when all of the cards have been played. The player with the most money wins the game.

My Thoughts on Arkansas Bluff

While I didn’t have a lot of expectations for Arkansas Bluff heading into playing it, I have to say that I left the game actually being kind of surprised. Arkansas Bluff has its own problems which I will get to later but I think you can make a good argument that it is better than Liar’s Dice as it fixes some of the problems with that game.

By far the biggest problem that I had with Liar’s Dice is that due to how the game is played, the player in the lead has a very good chance of increasing their lead on the other players. In Liar’s Dice when a player loses a round they lose one of their dice. This gives the player a disadvantage as they have less information than the player in the lead. With more information the player in the lead can make a more informed bet which likely will lead them to winning the round and thus growing their lead even more. Arkansas Bluff totally eliminates this issue as winning previous rounds gives you no advantage in future rounds. Each player gets a card and thus no player has anymore information than any other player. This is a really good decision for the game as you don’t have the potential to fall behind and never be able to catch up.

Another area where I think Arkansas Bluff improves on Liar’s Dice is that it removes some of the luck. In Liar’s Dice you could benefit from rolling several of the same number as it allowed you to bid higher without having to rely on the dice rolled by other players. The die roll luck is removed entirely in Arkansas Bluff as players just use cards that they are dealt at the beginning of the game. Some of these cards are better than others as the cards can have between two and four matching numbers. Everyone is guaranteed at least one pair of matching numbers though so none of the players have a significant advantage over the other players.

Other than just removing the dice roll luck, I actually like the idea of using cards for another reason. With each card having six different numbers on it, each round of the game will have between 30 and 36 different numbers in play. I like the idea of having more numbers in play as it allows more flexibility in bidding. You can bid with numbers between 0 and 9 and as there are more total numbers you can also bid higher. This makes the bluffing aspect of the game more important as it is harder to tell whether a player is bluffing or not. Being able to read the other players becomes quite important as you will only have access to a fifth or sixth of all of the information.

The final thing I prefer about Arkansas Bluff over Liar’s Dice is the idea that you can agree with a bid. In Liar’s Dice you have one of two options on your turn. You can either raise the bid or challenge the bid. This means that your fate in the game depends on the player that plays before you and after you as you can take advantage of a player that makes bad game decisions. In Arkansas Bluff it no longer matters who makes a bid as all of the players will have to either raise, agree or challenge it. Being able to agree with a challenge is also a great idea as there are times that you have a good idea that a bid will be met but you don’t want to risk raising the bid. By agreeing to the bid you can also benefit off of a good bid.

Arkansas Bluff improves upon Liar’s Dice in quite a few ways but there is one thing in particular that I don’t really care for. Each card in Arkansas Bluff has a fine printed on it which is used in scoring. Fines can range between $10 and $30. At first these numbers seemed kind of random but upon closer examination it turns out the fine amount is dependent on how many matching numbers the card has. A card with a $10 fine has a pair of matching numbers, a $20 fine means the card has three of the same number, and a $30 fine means the card has four of a kind. I don’t like the idea of the fines for a couple reasons.

The main reason that I don’t like the idea of the fines is that you have no control over the fine amount and thus some rounds can be quite a bit more valuable than others. Being on the right side of a bid for most of the rounds does not guarantee you a victory. If you win rounds that only give you $10 and lose rounds that cost you $30, you will make no progress and likely will lose money. Thus if a player can take advantage of winning a couple $30 rounds, they can win less rounds than a player that regularly wins $10 rounds.

I also don’t know if I really agree with how the fines are allocated in the game. By giving the higher fine amounts to the cards with more matching numbers, they are basically encouraging players with these cards to bid higher to try and get other players to challenge the bid. These cards have a higher risk/reward than the $10 fine cards but they also give the player who holds them more relevant information. Therefore these players are more likely to be right with their bids. Generally it is a good idea to be dealt a high fine card.

I will admit that I have no idea how to fix the scoring in Arkansas Bluff but how it currently stands is hurting the game. It is definitely possible to be right in most of the rounds and yet still lose the game if other players were able to take advantage of more valuable cards. I really don’t know how to fix the scoring as all of the cards were not created equally. Obviously all of the cards could not have had the same number of matching numbers. The game should have considered giving cards with only a two card pair at least two different pairs as this could have somewhat offset a card having four matching numbers. Then the game could have considered making players pay the same fine whenever they were wrong.

For the most part I would say that Arkansas Bluff’s components are pretty typical for a 1970s Parker Brothers game. While the car holders are not particularly necessary, I liked them quite a bit. The cardboard is kind of thin but I thought the game was quite clever using the holders to make the numbers appear as the car’s license plate. There is next to no theme in the actual gameplay but this is a clever way of utilizing the car theme. Otherwise the components are pretty generic. The cards are kind of bland. I wish the game had some more cards as the game ends pretty quickly. With more cards you could have played more rounds which would have helped eliminate some of the luck from the game.

Should You Buy Arkansas Bluff?

I can’t say that I had high expectations for Arkansas Bluff and yet I was kind of surprised by the game. You can easily see the impression that Liar’s Dice had on the game and yet I actually think Arkansas Bluff improves Liar’s Dice. First Arkansas Bluff keeps everyone on an equal footing as everyone will have access to the same amount of information. Second the game gets rid of some of the luck as you don’t have to worry about rolling dice and getting lucky. Finally the game gives players the ability to agree with the current bid which gives players more options instead of forcing them to challenge or raise the bid. Arkansas Bluff improves on Liar’s Dice in quite a few ways but I don’t like how the game handles the scoring. I don’t like the idea of fines as some players can get lucky and win the game despite winning less rounds due to receiving larger fines from the other players. The component quality is pretty typical even though I think the car holders are quite clever. At the end of the day Arkansas Bluff is a very solid but unspectacular bluffing game.

If you would like to purchase Arkansas Bluff you can find it online: Amazon