When you think about good themes for trivia games, you probably wouldn’t think that advertising would top the list. As it turns out though, advertising has actually been a pretty popular theme for trivia games as there are a surprising number of games that feature the theme. In the past I have looked at Logo Party which is just one game in the Logo line of board games. Today I am looking at one of earliest advertising trivia games Adverteasing. Due to the age and the fact that I am not a huge fan of the idea of a trivia game inspired by advertising, I can’t say I had high expectations for the game. Adverteasing is basically exactly what you would think it would be, a completely bland generic advertising themed trivia game.

The player to the left of the first guesser(s) will draw one of the cards. One side of the card features the clue and the other side features the multiple choice answers. The answer with a star next to it is the correct answer. The player shows the clue to the current guesser(s) and then turns over the timer. The guesser(s) has until the timer runs out to try and guess the correct answer. If the guesser(s) is correct they will move their playing piece forward three spaces. 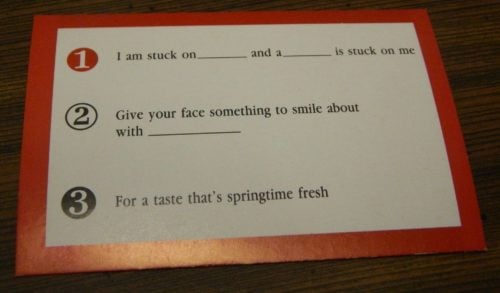 If the guesser(s) does not get the right answer in time, all of the players (other than the one looking at the card) get one guess at the answer. The first person/team to guess the right answer gets to move their playing piece forward two spaces.

If none of the players guess the correct answer, the original guesser(s) is given the multiple choice answers on the other side of the card. If they guess which one is correct, they get to move their playing piece forward one space. If they guess incorrectly, no one receives points from the round. 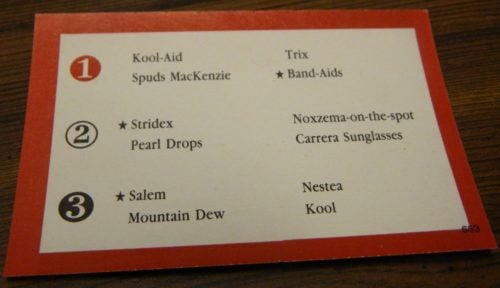 If the players haven’t guessed the answer in the first two rounds, the reader will list off the four multiple choice answers. Band-Aids is the correct answer.

The first player/team to reach the President space (score 25 points) wins the game. 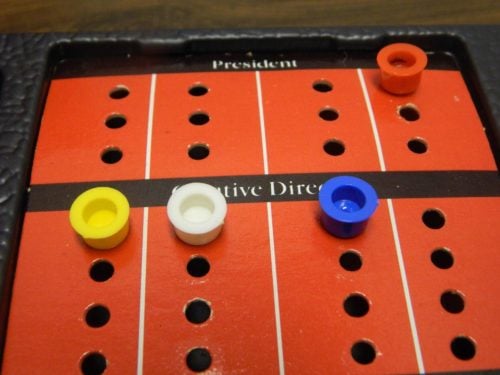 The red player has reached the last space so they have won the game.

To begin the review I would have liked to talk about what unique things Adverteasing brings to the trivia game table. Unfortunately I can’t because Adverteasing literally brings nothing new to the genre. Adverteasing is literally the most generic trivia game that you will ever find with an advertising/slogan theme pasted on. Basically players take turns trying to guess which company a slogan belongs to. That is all there is to the entire game. The only slightly unique mechanic is the fact that there are three different opportunities to guess the company with varying point values. I really wouldn’t consider this to be that unique though as there are a lot of trivia games that use a similar mechanic.

Adverteasing is basically what you would expect out of an advertising themed trivia game. You are given a slogan and have to try to guess which company it belongs to. The type of companies featured in Adverteasing are pretty typical of the type of companies you would see in commercials from the 1980s. The game features a lot of car, food and drink, and household goods companies. I was surprised by how many beer and credit card companies are featured in the game though.

After playing the game I have to say that I was a little surprised that the game was not quite as outdated as I thought. Of the cards we used I would say that around 30-40% of the slogans are either still used today or were used recent enough that someone who grew up in the 1990s could guess them. This still leaves 60-70% of the slogans being things that I had never heard before. There were even some companies that I never heard of because they went out of business shortly after the game was released. At least with the 1988 version of the game, Adverteasing is a game that favors older players. If you are not in your late 30s or older you probably won’t do very well in the original version of Adverteasing. I am assuming the 2008 and 2011 versions are much better in this regard but I could even see them starting to get outdated as companies tend to change their slogans more often then they used to.

There are some things that I like and don’t like about Adverteasing’s components. I give the game credit for the quantity of cards included with the game. The game has 700 cards and since each card has three slogans, this means that you can play 2,100 rounds of the game before you have to repeat any cards. I don’t think players ever have to worry about having to repeat cards since if you would happen to play all 2,100 rounds you won’t remember all of the slogans anyway. Outside of the quantity of cards though, the components could use some work. The card quality is below average. The gameboard, playing pieces and timer are kind of cheap. The components serve their purpose but leave something to be desired.

At its core Adverteasing is exactly what it looks like, an advertising themed trivia game. It is pretty much the most basic trivia game you will ever find. You are given a slogan and you have to guess which company that slogan belongs to. The game does give players three different ways to score which is appreciated but otherwise the game plays like every other trivia game. While things are likely different with newer versions of the game, the 1988 version of Adverteasing suffers from being outdated at this point since most of the slogans are no longer used and a decent amount of the companies no longer exist.

Your enjoyment of Adverteasing is going to come down to how much you like the premise. If you don’t really care for trivia games or advertising/slogans, Adverteasing is not going to be for you. If you like the idea of an advertising themed trivia game you can get some enjoyment out of the game. I personally would recommend picking up one of the newer versions though unless you are in your late 30s or older. I would also recommend waiting for a good deal on the game since it is a pretty generic trivia game.

If you would like to purchase Adverteasing you can find it online: Amazon (1988 version)