How to Play Advance to Boardwalk

This player has rolled a wild. They can choose which color they want to spend their $6 million on.

If a player rolls an “F” they get to take a fortune card but they cannot use the number they rolled to build units.

This player has rolled a “F” on the color die so they will draw a fortune card and ignore what they rolled on the other two dice. 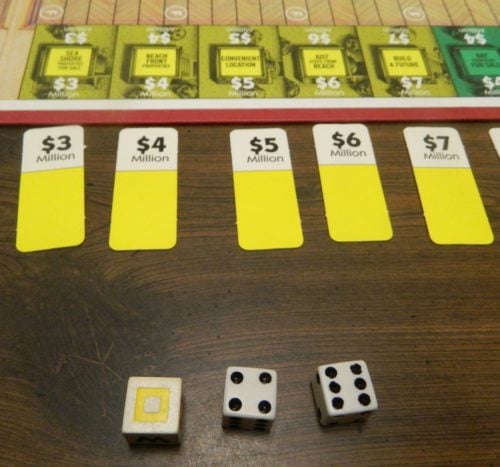 This player has rolled yellow and a ten. This player can spend up to $10 million in the yellow district.

The player can choose to use any combination of properties in the color to spend their money.

This player had $10 million to spend. They decided to place a unit on the $3 and $7 million properties. Since they are the only player to have units on these properties, they will take the two corresponding cards.

When building the following rules must be followed:

After you finish building units, you check to see whether you now control any of the properties you built on. If you gain control over a property you take the associated card and move your player piece forward the value of the property you now control. If another player previously controlled the property, they move their piece back the corresponding number of spaces. If the current player’s token lands on a space that has a “F” on it, the player gets to take a fortune card from the draw pile. 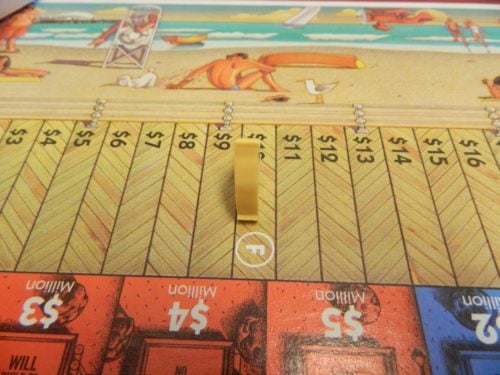 This player has landed on a “F” space so they will get to draw a fortune card.

A player can take control of a property in the following situations:

After building units and determining who controls the properties, the current player has the opportunity to play one fortune card. If a card mentions that you have to play it earlier in your turn, you play it at that time instead. When you play a fortune card you follow the directions and then discard the card. 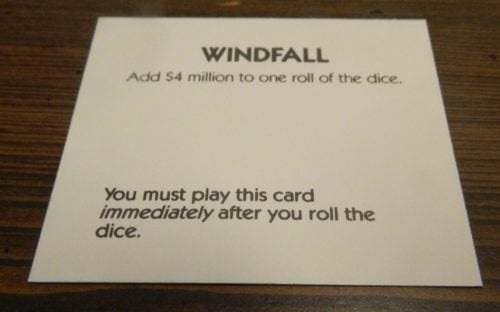 If a player wants to play this fortune card they have to play it after they roll the dice. Playing this card adds $4 million to the amount of money the player can spend this turn.

After a player has either played a fortune card or chosen not to, play passes to the player left of the current player.

Advance to Boardwalk can end in one of two ways.

If one player gets their pawn to the end of the board, they automatically win the game. 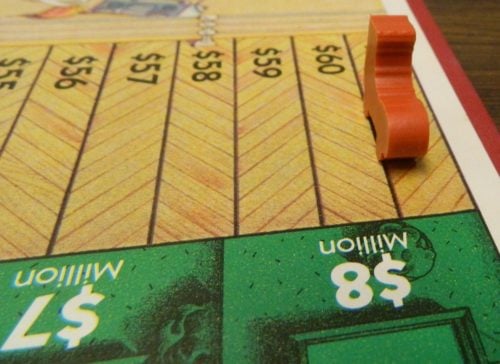 This player has reached the final space so they have won the game.

The gray player owns the most property so they win the game.

My Thoughts on Advance to Boardwalk

While you wouldn’t expect this type of mechanic from a Monopoly game, I actually like it quite a bit. For a Parker Brothers game from the 1980s, this mechanic is somewhat reminiscent of a mechanic that you would see in a light Euro game. There is actually a decent amount of strategy in figuring out which properties to build on during a turn. You need to analyze each property and determine which ones you can take control over by placing a unit(s) on them. It is usually pretty obvious what the best move is for a turn but sometimes there are some interesting decisions to make that will have an impact on the game.

The problem with the length though is that Advance to Boardwalk seems to end before anyone is able to implement their full strategy. Every time that I have played the game it seems to end as soon as it starts to get interesting. I think this is due to the game not giving the players enough units to use. While I am guessing this was done to shorten the game, I don’t understand why the game only has you use fourteen of the twenty units in the four player game. I think the game could have easily let you use all twenty units in the four player game and it wouldn’t have added much time to the game. With more units it would have allowed players to have more time to implement their strategy.

With you only having so many units to use in the game, you actually have to be kind of picky on how you use them in the game. Before you waste a bunch of units on low value properties, you may consider holding onto some of them to use on higher value properties. If you roll a high number you could use all of your money and play several units in a turn. If you do this every turn though you will run out of units quickly. If you are in the lead I could see doing this on purpose to end the game quicker but it hurts the game in the process. In the last game that I played, I had over half of my units left when one of the players played their last unit. At the end of the game it felt like I had barely had an opportunity to play the game before it was over.

That was just one example of Advance to Boardwalk being a pretty cutthroat game. Since no property is ever truly safe, players will constantly be stealing properties from one another. Your fate in the game is going to depend on whether the other players decide to target your properties. If players mostly ignore your properties, your chances of winning the game increase significantly since you can use your turn to try and acquire more properties. If players are constantly attacking your properties though, you will have to use your turns playing defense. If you are forced to play defensively you won’t really be able to acquire many more properties which means you don’t have a good chance of winning the game.

The game can also be kind of mean due to the fortune cards. The fortune cards in general can be kind of hit or miss. Some are not particularly strong while others can totally change the game. For example one of the cards allows a player to remove all but their own units from a property. If a player invested a lot of their units into that property, they will lose all of that investment due to one card being played. A player that only had one unit in that property could take control over it when they had the least invested into it. While I like that the fortune cards add some opportunities for strategy, I also think they add too much luck to the game. Players who draw the best cards are going to have an easier time winning the game.

There is actually a lot that I really liked about Advance to Boardwalk. The problem is that luck ruins a lot of the game’s potential. Advance to Boardwalk has more strategic decisions than you would normally expect out of this type of game. The problem is that they don’t always matter as luck is going to play a pretty big role in how well you do in the game. If luck is not on your side, you are going to have a hard time winning the game.

At the heart of Advance to Boardwalk’s luck is the dice rolling. If you roll poorly you are simply not going to win the game. Players who roll higher numbers will always have an advantage as it gives you more flexibility in the game. With more money you can either build more units on your turn or you can build on higher value properties. If you roll lower numbers you can’t do either. In addition the color die has a big impact on how well you are going to do. If you roll a color that you don’t really want, you are forced to build there even if it doesn’t really help you. Even worse is rolling a “F” since you can’t use the number you rolled at all. Some fortune cards can be powerful but very few cards are worth losing an entire turn to acquire.

For the components you basically get what you would expect from a 1980s Parker Brothers game. The components do their job but are nothing special. I really think the game could have chosen better colors for the players as they are pretty bland/ugly. The artwork on the gameboard is decent but the cards are pretty bland. I will give the game some credit since the units are really easy to stack and un-stack. The playing pieces are also pretty unique.

Should You Buy Advance to Boardwalk?

Advance to Boardwalk is an interesting game because it is better than it had any right to be. The fact that the game shoehorns in the Monopoly theme makes the game look like it was a quick cash grab to make some money off the Monopoly theme. There is more to the game than that though. Advance to Boardwalk is basically a light area control game. Players compete to control the different properties by building the most units on it. There is some interesting strategy in deciding which properties to add units to as you fight for control over the properties. The problem is that the game relies on so much luck. The player who rolls best is likely going to win the game. While I would still say that Advance to Boardwalk is better than the original Monopoly, it is a shame that due to luck the game is unable to fulfill its full potential.

If you would like to purchase Advance to Boardwalk you can find it online: Amazon (1985)