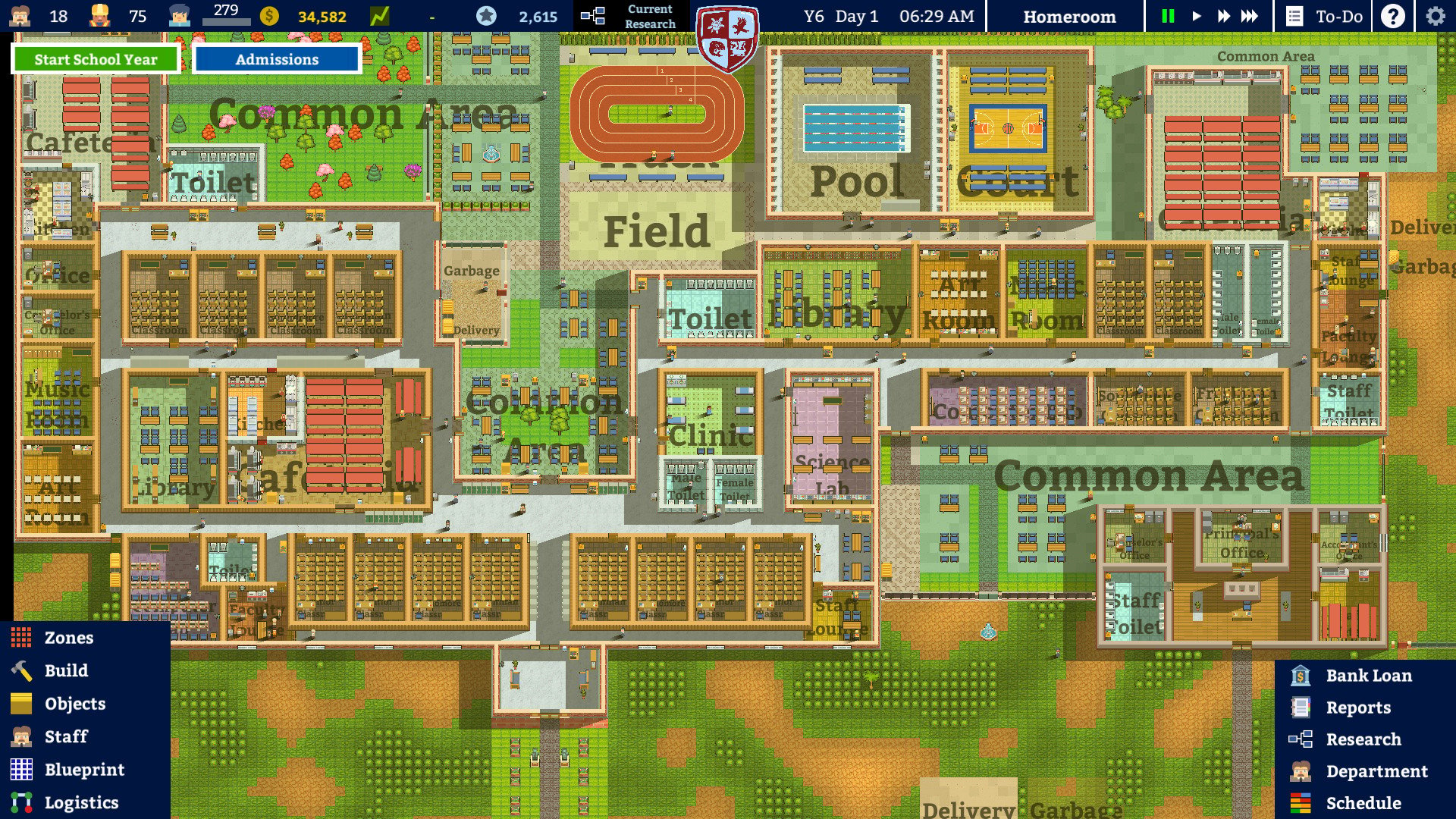 Ever since I was a kid I have loved the tycoon simulation genre. I grew up really enjoying Theme Hospital and the Roller Coaster Tycoon series and I have enjoyed quite a few other series over the years. As such a big fan of the genre I have checked out quite a few different tycoon games involving a wide range of different businesses. One type of tycoon game that I have never played before though was one where you built your own school. There have been school tycoon games released in the past but I never tried them out because I didn’t know how well the genre would work with running a school. When I saw Academia: School Simulator though I was intrigued as it looked really interesting and reminded me a lot of Prison Architect a game I really enjoyed. For an early access game Academia: School Simulator shows a lot of promise as it is already an interesting and fun school building experience.

In Academia: School Simulator you are the superintendent of a new high school. You begin with a small grant in order to create the beginnings of a school. To create your school you must build classrooms, restrooms, cafeterias, staff offices, and specialty classrooms in order to aid in helping your students learn. Hire teachers and assign them to different departments so they can teach your students the subjects they need to learn in order to succeed. To run a smooth operation you also need to hire janitors to clean up, monitors to deal with troublemakers, cooks to prepare meals, nurses to take care of ill children, principals and vice principals to run the daily operations, and other behind the scenes personnel to make sure your school runs smoothly.

When you open up your school you will choose how many students you will enroll in each of the four classes (freshmen, sophomore, junior, senior) of high school. For each student you enroll you will receive tuition which will be used to pay staff salaries and utilities, and allow you to expand your school to provide a better service and teach more students. Each day your students will go through a normal school day where they learn about each of the subjects and fulfill their other needs in order to stay motivated. As they learn their knowledge of the subjects will increase. This is important because at the end of the school year (only 12 days in Academia: School Simulator) your students will be given an end of the school year test. If they pass these tests they will move onto the next grade and will return the next day as a student of the next grade. If they fail the test they will have to repeat the grade. As you move students through your school you will earn money which you can use to further expand your school allowing you to take on even more students.

Anyone that is familiar with the tycoon simulation genre should already have a pretty good idea of what it is like playing Academia: School Simulator. Basically take your typical game from the genre and imagine that you are building a school. A lot of the mechanics are similar to other tycoon games. To build a room you begin by creating a zone for the room which will clarify what type of room that it will be. You then build walls around the room (unless it is one of the few zones that need to be outside), place your choice of flooring, and place a door. To complete the room you need to fill it with the required objects. When the room is planned out your workers will begin building the room and placing the objects. Once this is all done it can be used by students and staff for its intended purpose. This process is really simple and should be familiar to anyone who has experience with the genre.

While Academia: School Simulator shares a lot in common with your typical tycoon simulation game, it differs some due to the fact that you are running a school. Instead of building an attraction that people will visit once and then leave, you will be dealing with the same students each day as you try to teach them so they can pass the final test. This is where Academia: School Simulator kind of feels like a combination of a a tycoon game with The Sims. While you don’t have direct control over any of the students, when building a successful school you need to make sure you meet all of your students’ needs. In addition to providing them a good teacher you also need to give them rooms to feed their hunger, provide for their hygiene needs, help with their mental needs, and make sure they feel safe. If you fail to provide for all of their needs they will lose their motivation to learn or skip school altogether which will impact how much they learn. They are then more likely to fail and be held back.

Before playing Academia: School Simulator I was a little curious about how a school tycoon would play as most of these type of games deal with industries that are built around turning a profit whereas a school is mostly about teaching students. For the most part I really liked Academia: School Simulator. For a game in early access I was quite surprised by how much the game lets you do. The game has been in early access for two years and it shows. You begin by just adding some basic classrooms and other necessities. As your school expands there are a ton of different buildings that you can add that provide additional benefits to your students and staff. Between the amount of rooms that you can build and how much control you have over the school you build, you can pretty much make whatever school you want as long as it is financially sustainable. With the most recent addition to Academia: School Simulator you can build massive schools as you can buy new plots of land, bus your students to school, increase the number of students that you can have, and even build renewable sources of water and electricity in order to save your school some money.

I applaud Academia: School Simulator for doing a good job teaching you how to play. At this point the game doesn’t have a tutorial. Instead the game teaches the various mechanics using a grant system. The game gives you a list of grants that you can apply for. Each of these grants are used to teach you about a new type of room or a new mechanic. They give you a step by step checklist of what you need to do to add this new element to your school. When you take the grants and complete them you will receive money that you can use to grow your school. The game does a great job separating the rooms and the objects that you need for each room. You can easily look up each room and know exactly what you need in order to complete the room. These grants are all really easy to follow making the game quite approachable. I will warn players not to expand their schools too quickly though. You need to pace out the grants as you can run into money troubles if you keep taking grants and adding new rooms to your school before adding more students. If you expand too quickly you will develop a negative cash flow which will bankrupt you. Instead take the building process slower and you shouldn’t have too much trouble building a successful school.

I really enjoyed my time with Academia: School Simulator as I had a lot of fun creating my own school. For a game that is still in early access and is expected to remain in early access for around another year, I am really encouraged by how good the game already is. The game is already fun and has a lot of mechanics which allow you to build the school of your dreams. I did have a couple issues with the game at this point though.

At this point the game features two different modes. The normal mode has you running your school where you have to worry about your budget. You need to run a school that remains financially stable or it will be shut down. Then there is the sandbox mode where you are given all of the tools to build whatever school you want without having to worry about money. While these modes are fun I kind of wish the game included a sort of campaign/scenario mode as well where you have to build a school overcoming obstacles to reach a certain level in order to succeed. I have always been a fan of campaigns in these type of games and I hope that Academia: School Simulator chooses to add one in the future. The developers were planning on adding scenarios originally so hopefully this is something that we can expect in the future.

The other issue I currently have with Academia: School Simulator is that it just feels like it is missing something. I am not exactly sure what it is either. The game could probably give you a little more control over how your school is run as well as add some more types of rooms to the game. I have really enjoyed my time with Academia: School Simulator to this point but I am a little worried about the replay value. Once you have built a functioning school there isn’t much else to do outside of expanding it further in order to add more students to your school. This is still fun but I worry that it might get a little repetitive after a while. When you build a new school you can make it look entirely different than the last school you made. You are still going to mostly be following the same process though. I don’t know exactly what the game could add but I hope the game adds some other things to do once you have built a successful school. As the game has done a good job in the early access process so far I expect these issues will be resolved before the game leaves early access.

I am a big fan of tycoon simulation games so I was intrigued when I saw Academia: School Simulator but also a little cautious because I didn’t know how the tycoon genre would translate to running a school. The good news is that it works quite well. In a lot of ways Academia: School Simulator is similar to your typical game from the genre as the building mechanics and the staff mechanics are very similar to what you would find in most games from the genre. Building a school does present some additional challenges though as you need to meet your students’ needs so they can learn and advance to the next grade. This is a really interesting mechanic and leads to a fun experience. The game’s art style is also quite good as it is quite reminiscent of Prison Architect. For a game that is still around a year away from leaving early access the game is already in great shape. Before the final version is released though I hope it adds a sort of campaign mode where you have to complete different scenarios. The game also feels like it is missing something as once you have built a successful school the game mostly boils down to just expanding it in order to grow the student population.