The 1980s were an interesting decade for Milton Bradley. Milton Bradley was in pursuit of their next hit game which lead to them trying some unique new ideas. This strategy lead to some mixed results. Milton Bradley created some popular games in the 1980s, but also created a lot of flops that were soon forgotten. One idea that Milton Bradley had was to create a line of simple games of skill. This lead to the creation of the T.H.I.N.G.S. (Totally Hilarious Incredibly Neat Games of Skill) line of games. These games mostly involved a small plastic game unit which included a mechanical time. Most of the games involved pressing a button to use a contraption that would collect/shoot a set of objects. The goal was to try and collect/get rid of all of the objects before you ran out of time.

The T.H.I.N.G.S. line was originally released back in 1986. In the first wave four games were released which included Eggzilla, Flip-O-Potamus, Grabbit, and Sir Ring-A-Lot. The line was successful enough that a second wave was created the next year in 1987. The 1987 line included Astro-Nots, Dr. Wack-O, Go-Rilla, and Jack B. Timber. The second wave was much less successful as the T.H.I.N.G.S. line only received one additional game in 1988 called E-E-Egor before ending for good.

As the T.H.I.N.G.S. line was released a few years before I was born, until recently I was not familiar with them. When I heard about it though I was immediately interested as I have always been a sucker for these type of games. From the mechanical components to the simplicity of the games, I thought I would enjoy them quite a bit. Unfortunately I have only been able to find one of the T.H.I.N.G.S. games (Grabbit). I will elaborate more later but I found Grabbit to be an interesting simple little game of skill that while fun can get a little repetitive after a while.

So without further ado, lets take a look at the games that made up the Milton Bradley line of T.H.I.N.G.S. games.

In Eggzilla the world is in danger. A Kaiju that looks suspiciously like Godzilla is about to wake up. You are the only person who can save the world. In order to save the world you must place Eggzilla back into its egg before it wakes up and jumps off its platform. This involves figuring out how to place the five egg pieces together in order to complete the egg in time. Once all of the puzzle pieces have been properly reassembled the timer will stop. If the player can complete the egg before Eggzilla jumps out, they will win the game. 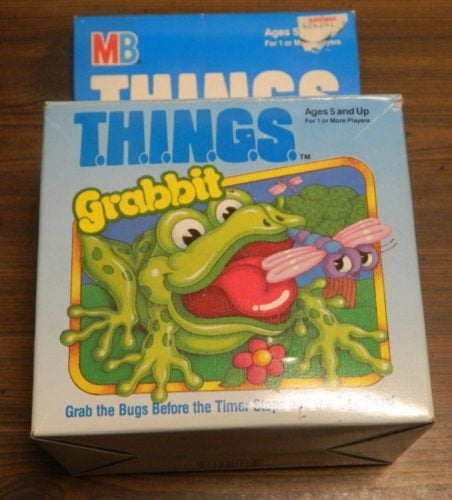 In Grabbit you play as a hungry frog sitting next to a tree filled with tasty bugs. Once you start the timer the tree will start spinning while also rising and lowering. Grabbit has one button which when pressed raises up the frog. As a bug approaches the frog you need to press the button in order to raise the frog. If you time it correctly the bug should fall into the frog’s mouth. The ultimate goal of the game is to try and catch all six bugs in the frog before you run out of time. 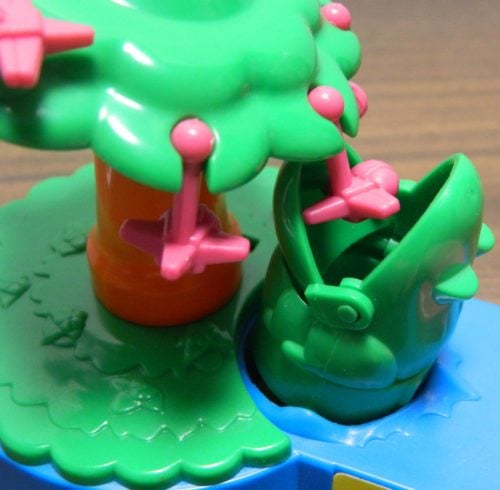 The player pressed down on the button in order to raise the frog to try and catch the bug.

Like most of the games in the T.H.I.N.G.S. line of board games, Grabbit is a pretty simple game. The game only has one button after all. Grabbit basically relies entirely on timing as you need to time when to raise the frog in order to capture the bugs. This is why Grabbit relies mostly on skill. Players who are good at timing are gong to be naturally better at the game. You should also be able to improve at the game the more you play it. While the game is pretty simple I had fun playing it. There is something satisfying about successfully capturing the bugs.

In Sir Ring-A-Lot you play as a knight. Bats are circling around the knight with rings in their claws. The game has one button which raises the knight when you press it. You try to use the knight’s lance to grab the rings from the bats. You need to time it right though because if you miss a ring you lose it for the rest of the game as the bat will deposit it on a platform. The goal of the game is to catch as many of the rings as possible on your knight’s lance.

In Astro-Nots your fellow “astro-nots” are on the moon’s surface. An angry alien is approaching the moon and you have to get all of the astro-nots off the moon’s surface before the alien arrives. To accomplish this task you must use your spaceship to pick them up and move them to a save area. There is a magnet at the end of your spaceship as well as on the top of the astro-nots. Using the magnet on the spaceship you need to pick up the astro-nots and move them to the safe zone. If you can move all of them to the safe zone before the alien arrives, you win the game.

In Dr. Wack-O the objective is to capture all of the discs with your magnetic hammer. The discs will rotate around Dr. Wack-O. In order to capture a disc you first have to press the button at the right time in order to flip the disc over so the magnet is facing up. Once the discs are flipped over the player can use the magnet on their hammer in order to pick up the discs. The player wins the game if they can pick up all of the discs before they run out of time.

Buy Jack B. Timber on eBay

As this was the last released T.H.I.N.G.S. game it is by far the rarest game in the line which makes it pretty hard to find.

If you would like to learn more about the T.H.I.N.G.S. line of games I would highly recommend checking out aboardgameaday which had a detailed look at the entire line. Wave One | Wave Two | Wave Three

Cue Me! Board Game Review and Rules