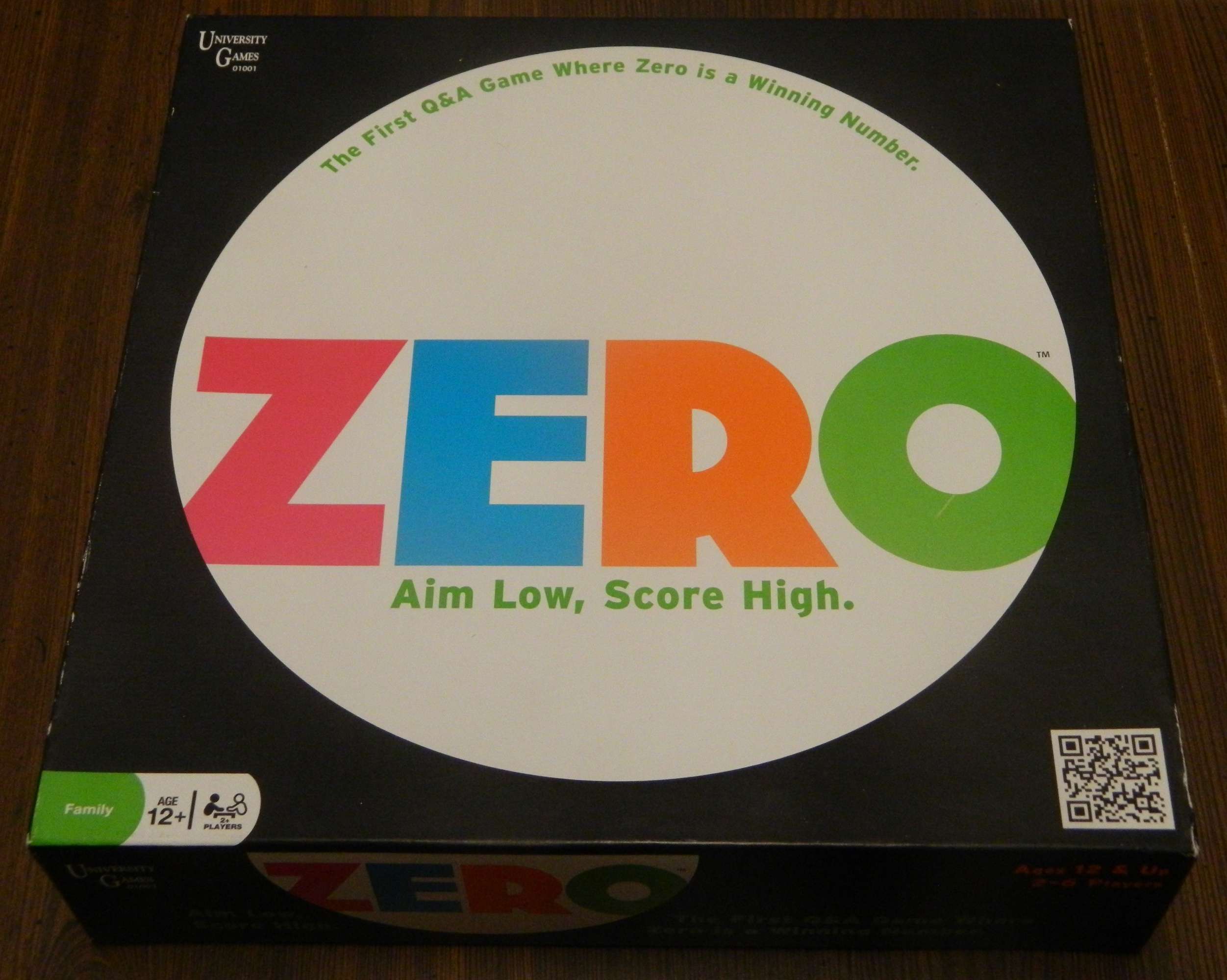 Zero is a 2011 trivia game from University Games that is pretty much the opposite of Family Feud. Instead of trying to guess the best answer to a trivia question, the objective is to think of a less popular answer to avoid moving too many spaces.

University Games polled more than 450 people (the game even includes a list of them so you know who to blame when your “perfect” answer winds up not even being on the card) to answer the 270 questions in Zero. They then tallied up the responses and weighted each answer depending on how many people gave it. Popular answers were given high numbers like 100 or 90 while uncommon answers were given lower numbers (some were even given a 0 which means that less than 5% of people polled gave the answer).

Now that you know how Zero was created, we can move on to how to play the game. The youngest player gets to be the first reader and the job moves clockwise as the game continues. The reader takes a card from the deck and reads it out loud (without looking at the back of the card since they can answer as well). A sample question from the game is to name “one of the 10 most populated countries in the world.”

The player to the left of the reader gets to make the first guess. Obviously they don’t want to say something like China or the United States because they are too obvious. The object is to guess an answer that is obscure and thus not worth a lot of points. Let’s say they guess Japan. Players continue guessing in a clockwise fashion. They must come up with unique answers, they can’t use the same answer as another player. The reader is the last to make a guess and when they have done so, they turn over the card and read the results.

For example, the results for the 10 most populated countries card is China and India 100, Japan and United States 80, Brazil 60, Russia 20, and Bangladesh, Indonesia, Nigeria, and Pakistan 0. As players hear their guess and the points assigned to it, they move their moving piece one space for every ten points on the answer card (so a player answering China would move 10 spaces, Brazil would make a player move 6 spaces, and any of the last four countries would keep the player were they are). You are trying not to move your playing piece (or at least try to move it the least amount of spaces you can).

However, you can’t game the system and make an obviously wrong guess because you will be punished. If you guess something like Monaco (a country with an area less than one square mile) that is obviously not on the card, you will move ten spaces (the same as players guessing China or India). If the guess is reasonable but didn’t make it onto the card, it still counts as an incorrect answer and forces the player to move the full ten spaces.

After all players have moved their pieces, a new question is read by the new reader (the player to the previous reader’s left). Play continues in the exact same way until all but one player has run out of spaces on the board (and are on the ending “Z” space). The remaining player is the winner.

However, there are a few twists to Zero. First of all, eliminated players actually have a chance to return to the game even after they hit the end of the board. Eliminated players continue answering questions hoping to guess the least common answer to one of them. If they manage to do so (it’s really tough to guess the least popular answer), they are back in the game and move ten spaces back from the Z space. Players may only save themselves once per game and if they get eliminated for a second time, they are out of the game for good.

Players are also give three different types of tokens at the start of the game. Tokens can only be played one time each and except for the “me too” token, must be played at the beginning of a player’s turn. Instead of answering a question, a player can use one of their tokens. The “skip it” token allows the player to skip their turn, meaning they won’t have to give an answer and won’t move any spaces. If a player knows a very common answer to the question, they can play their “rewind it” token. When a rewind it token is played, the player who played it now wants to respond with the most common answer they can think of because they will move backwards (instead of forwards) that amount of spaces.

The last type of token is the “me too” token. Playing this token allows a player to piggyback on another player’s answer. It must be played before any answers are given though. They pick a player to copy and when that player has made their guess, it will also be the guess for the player who used the token as well.

Finally, the last mechanic of Zero is the bonus space. When a player lands on a bonus space after they have finished moving, a bonus round is played for only the player who landed on it. They are asked a normal question and try to come up with the most common answer they can think of. In this case, they go backwards the amount of spaces instead of forwards. Other players (who did not land on a bonus space) cannot participate in this bonus round.

Zero is an interesting and unique trivia game but there are a few too many problems with it for me to recommend it (unless you find it at a thrift store for a couple dollars). The game really tests your trivia knowledge since it is easy to come up with the top answer to most of these questions, but figuring out the most obscure answer takes a lot of work. Even with some gameplay issues, Zero could be a decent game for trivia buffs who really want to test their knowledge.

The biggest problem I had with Zero is that the answers feel kind of arbitrary. The “good” answers seem to be pretty random. You could easily give a great answer that applies to the question and everybody thinks is perfect and it turns out the answer isn’t even on the card. Even though your answer is perfect, since nobody polled gave that answer you move ten spaces. It’s also very easy to give what you think is a mid-tier answer (one that should move you four or five spaces) and find out that it was one of the most popular responses.

Also, in a lot of the obvious questions (like names of Star Wars films) almost all of the items have very high amounts of points assigned to them. This seems to happen the most on very obvious questions and ones that only have five or six possible answers (questions with more possible answers will obviously distribute the points a bit better). On one of the cards we played, the lowest amount you could get was 50 points meaning you would move five spaces no matter what answer you gave. It is really stupid that you can give the best possible answer and still move five spaces in this game. There’s even a few questions where there are less than six possible answers on the card, so if you play with the full six players someone will automatically be forced to move ten spaces (unless someone uses a token). That is yet another design flaw with this game.

It also just feels like a lot of the game is outside the players’ control. You are completely at the mercy of the people who were polled. You can’t give too obscure of an answer because there’s a good chance it won’t even be on the list and you’ll be stuck moving ten spaces. Before you give an answer, you have to think of obscure answers, determine which one you think is the most obscure, and then decide whether you think it actually made the list or not. And that’s if you actually know an obscure answer, there were plenty of questions where we only knew a few answers or even none at all (“A Thin Man movie starring William Powell and Myrna Loy”).

However, even though I have brought up a lot of negatives with Zero, I actually did still somewhat enjoy it. While I’m definitely glad I only payed a dollar for it at a thrift store, I don’t regret purchasing it. One of the biggest positives of Zero is some of the unique game mechanics. I really like the second chance feature, especially since it is easy to get eliminated very early in this game. Allowing players to earn a second chance is a great idea, even though it won’t happen very often and usually won’t matter much (unless you get back in the game when the last two players are close to being eliminated, moving back ten spaces usually isn’t enough to give you a chance to actually win).

I also like the tokens and think they are a great addition to the game. Since there is a question about just about any topic you can think of, the skip it token was needed because there will be at least one question in every game that you can’t even name a single answer for. The rewind it token is especially interesting, even though it is pretty much a free nine or ten spaces (since players will only play it when they know the top answer). I think the me too token should have let you wait until all answers are announced before you pick which one to go with (since if the other player doesn’t know a good answer they could just purposely pick something to move both of you ten spaces).

One mechanic I don’t really like is the bonus space. I don’t mind the concept but the execution is poor. The problem with the bonus space is that only the player who lands on it gets to answer the question. Since landing on bonus spaces is completely luck-based and the player attempts to give the most common answer (much easier than picking an obscure answer like players do in the rest of the game), this can completely unbalance the game and give that player a very good chance of winning (assuming they give one of the top answers). Since an average game will only see one player land on one of these spaces, that is a huge advantage for that player.

Thankfully Zero is pretty cheap to buy on Amazon because the game doesn’t have a lot of content. The game comes with only 270 questions. While you might only play 10-15 questions in a normal game, the games are very fast (less than a half hour) so Zero won’t give you a very good playtime to price ratio. The game also has pretty low re-playability since it will be pretty easy to remember the questions and answers. In addition, the components are very basic and boring.

While I think Zero has a lot of problems, I also think it’s a solid filler game if you can find it for cheap. The game also provides an interesting challenge for trivia buffs. I just wish the game would have made some different choices when it came to the polling. With some slight modifications to the game (and with the addition of more questions), Zero could have been good game instead of just an average one.