Created back in the 1960s the Pop-O-Matic dice roller was an interesting component for its time period. Most known for the board game Sorry!, the Pop-O-Matic was a contraption where a dice was placed inside a plastic container with a thin piece of metal on the bottom. When players press on the top of the popper it presses down on the piece of metal which flips the die inside the bubble essentially rolling the die for you. While the Pop-O-Matic dice roller is most known for Trouble it has actually appeared in quite a few more games than you would think. Today’s game Yipes! is one of those games that took the Pop-O-Matic and added in a monster theme where players compete to become the monster and then try to eat the rest of the players. Yipes! theme is decent and chasing the other players as the monster is more fun than it should be but at the end of the day Yipes! ends up being another very generic children’s roll and move game.

How to Play Yipes!

Each round begins with the players racing to get to the laboratory in the center of the gameboard. On a player’s turn they pop the popper and move their playing piece the corresponding number of spaces clockwise around the gameboard. 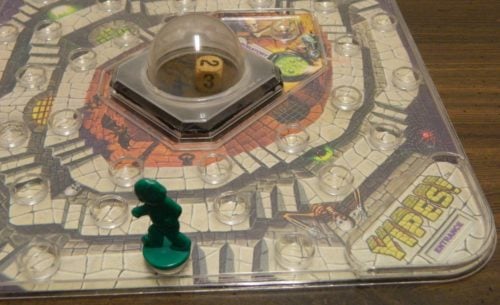 The green player has rolled a two. They will move their playing piece two spaces.

If a player lands on a space occupied by another player, the player that previously occupied the space is sent back to start. A player cannot be sent back to the start if they have already reached the laboratory. 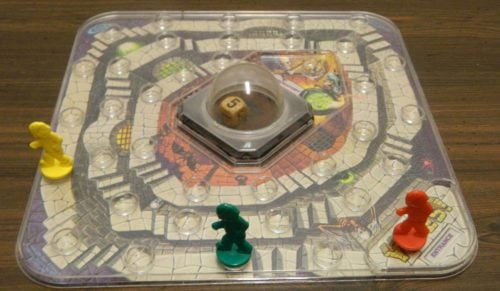 The red player has rolled a five. The red player will land on the same space as the yellow player sending them back to the entrance.

To reach the laboratory the player has to land on the space by exact count. 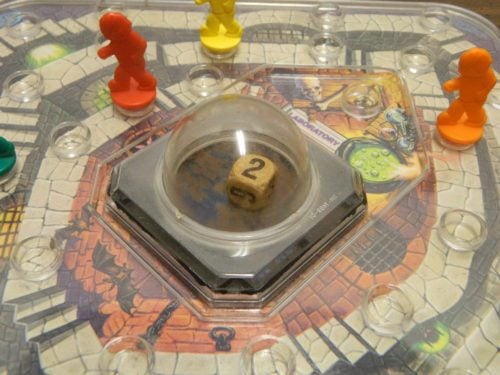 Once a player is in the laboratory, they will begin their turn by calling out a number (between 1 and 6). They will then pop the popper. If they did not guess the number that they picked, their turn ends immediately. The first player inside the laboratory to correctly guess the number they roll is turned into the monster. The player replaces their playing piece with the monster piece. The game then moves onto the second stage of the round. 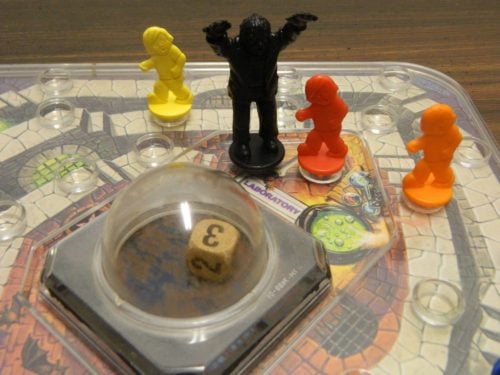 The red player predicted that they were going to roll a three. Since they rolled a three they will be turned into the monster.

Escaping From the Monster

After one of the players has become the monster, all of the other players will race towards the entrance on their turns. The human characters get to roll the die one time and move the corresponding number of spaces towards the entrance. When a human reaches the entrance (does not have to be by exact count), they have escaped the mansion. If one of the human players land on a space occupied by another player, they will stop on the first unoccupied space behind the player already occupying the space.

The player who became the monster is stuck in the laboratory until they are able to roll a one. Once they roll a one, they can immediately leave the laboratory and start chasing after the other players. While moving the monster rolls the die two times and moves the total of the two die rolls. While moving if the monster lands on or moves through a space occupied by a human character, they eat them. The players controlling those characters are out for the rest of the round. 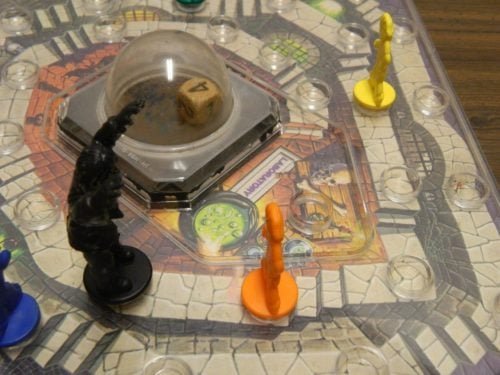 This stage ends when all of the humans have either been eaten or have escaped. 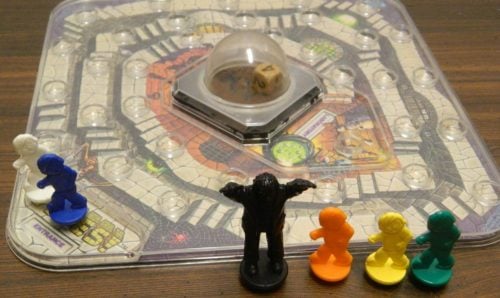 If all three rounds have not been played yet, another round is played.

After three rounds have been played, the players tally their scores. The player that has scored the most points wins the game.

My Thoughts on Yipes!

Yipes! has a couple interesting ideas (which I will get to shortly) but for the most part it is just another very basic roll and move game. Players take turns popping the Pop-O-Matic and moving their playing piece the corresponding number of spaces. Outside of choosing a number when you reach the laboratory, there are no decisions or strategy in the game. You can’t choose how many spaces to move or which path to take. You just roll the die and move. As the game has no meaningful decisions, Yipes! relies almost entirely on luck. Whoever rolls the right numbers at the right times is going to win the game.

Each round of Yipes! consists of two stages. The first stage is the most basic roll and move game you are ever going to find. Players are basically racing one another in order to reach the finish line first. Yipes! also includes a mechanic where you can send back other player’s pieces to the entrance but this mechanic is far from original as it has been used in many other games. I generally hate this type of mechanic. I don’t like when one lucky roll by another player can make you lose all of the progress that you have made. The mechanic adds even more luck to the game and mostly just makes the game last longer.

Probably the best part of the game is the second stage where one player is the monster while the other players try to get out of the mansion as quickly as possible. While this stage of the game still uses a generic roll and move mechanic, the idea of the monster chasing the other players is more exciting than I expected. The human players generally get a small head start as the monster will usually be stuck in the laboratory for a couple turns as they try to roll a one. Once the monster escapes the laboratory though the chase is on. Since the monster gets to roll twice each turn, the monster can catch up to the other players really quickly. If the monster player rolls a one quickly, the players stand no chance of surviving unless they were close to the entrance at the beginning of the stage. The second stage still ends up being a generic roll and move game but the addition of the chase between the humans and monster adds a little excitement to the game.

Other than the high reliance on luck, I would say the biggest problem that I had with Yipes! was the fact that the game has way too many catchup mechanics. I have already said why I didn’t care for the mechanic where you could send other players back to the start. When you get to the end of the board a player basically has to roll three exact numbers to become the monster and start chasing the other players. First they have to reach the laboratory by exact count. They then have to roll the exact number they predicted in order to become the monster. Finally they have to roll a one in order to escape the laboratory. These three things added together just feel like they were made as a catchup mechanic and they ultimately just make the game take longer.

Probably the most appealing thing about Yipes! is the game’s monster theme. Starting with the boxes knockoff Universal monsters, the game does try to take advantage of the game’s monster theme. The theme somewhat applies to the gameplay as well since the monster chases after the human players and eats whichever ones it catches up to. The idea of the monster eating the humans it captures seems a little gruesome for a children’s game but with the game being a board game you can ignore the theme if you are playing with younger children. While the theme utilizes bootleg monsters I would still say the monster theme is probably one of the game’s greatest strengths as I could see fans of monster movies getting some enjoyment out of the game.

In addition to the theme I actually was a little surprised by the component quality of Yipes!. The game’s components are reminiscent of Trouble but I think they work well for the game. The Pop-O-Matic die popper works well like usual. There is just something satisfying about using a Pop-O-Matic dice popper. The board itself is pretty generic. I actually like the character pieces more than I thought I would. The characters show quite a bit of detail for a board game from 1983. The only complaint I had with the playing pieces is that they tend to fall over quite a bit.

Should You Buy Yipes!?

Yipes! is an interesting game as it tried to actually add an interesting theme to the Pop-O-Matic die popper. While the monsters on the box are basically bootleg Universal monster characters, the theme is actually one of the best things about Yipes!. I think fans of old monster movies will appreciate the theme quite a bit. Outside of the theme though, Yipes! is basically another very generic roll and move game that relies almost entirely on luck. While it is kind of fun chasing down the other players as the monster, it doesn’t offset an otherwise boring roll and move game.

If you don’t love the old monster movie theme or roll and move games, you will likely be quite bored by Yipes!. If you are into the monster theme though and don’t mind a very generic roll and move game it may be worth picking up Yipes! if you can find the game for cheap.

If you would like to purchase Yipes! you can find it online: Amazon