If the player doesn’t currently have a combo or they want to try for a more valuable combo, they proceed with their turn. They look at the cards in their hand and decide which cards they would like to discard. They discard these cards face up and draw the same number of cards from the draw pile.

This player currently has three yellow fives. They will probably want to discard the purple and red two cards and draw two new cards.

Both players that called “Hands Down” flip over their cards and compare the combos in their cards. If one or both of the players didn’t actually have a valid combo, that player(s) will have three of their cards discarded by another player and replaced with three new cards from the draw pile. All of the players continue playing like normal until two players get a combo. The player with the more valuable combo gets to take the corresponding combo card from the table. If both players have the same combo whichever player’s combo uses higher numbers breaks the tie. If it is still a tie, whoever played their combo first breaks the tie. The player with the lower valued combo takes the top chance card and places it face down in front of them without looking at it. 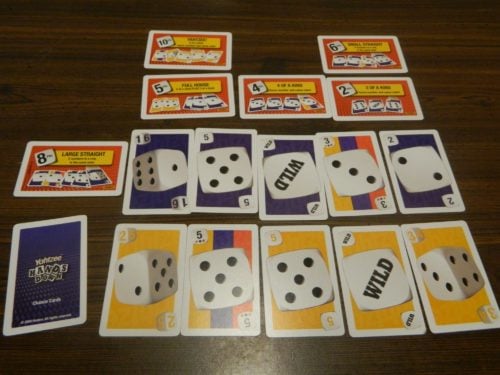 Both players who played a combo discard all five of their cards and draw five new cards. The players who didn’t play a combo keep all five cards in their hand. The first player to start the next round is the player to the left of the player who started the previous round.

There are a couple special dice cards in the game which have the following abilities.

There are six different combos in the game which are as follows:

The game is played until all of the combo cards have been taken. Players combine points on combo and chance cards. Whichever player has the most points wins the game. 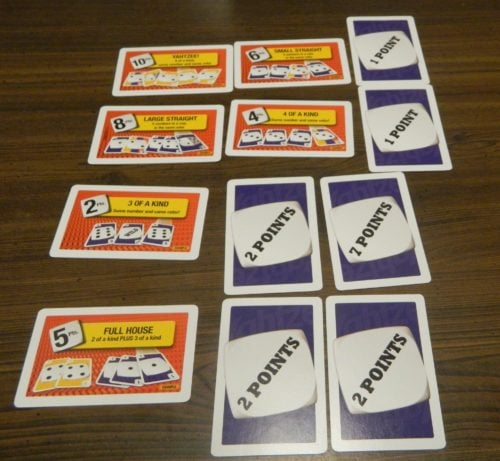 The top player has scored the most points (17) and has won the game.

Over the years Hasbro has tried building the brands of some of their most popular board games. This has included a lot of spinoff games loosely based off the original game. Today I am looking at one of these spinoff games Yahtzee Hands Down. I personally wouldn’t call myself a big fan of Yahtzee. While I must have played the game at some point, Yahtzee is such a bland dice game that I can’t specifically recall ever playing the game.

For the few of you who have never played Yahtzee before, it is your basic dice rolling game where you try to roll different dice combinations. Yahtzee Hands Down takes this idea and turns it into a card game. While it is far from perfect, Yahtzee Hands Down may actually be better than the original game.

Most of the strategy in Yahtzee Hands Down comes down to what combos you decide to go after. You can try to go for the easier combos to make sure you are one of the players that will get a card or you can try and wait to get one of the higher combos in order to score more points. I could see both strategies working some of the time. While the cards that get dealt to you will usually determine what combos you go after, occasionally you will get a chance to decide what combo you want to go after.

The other strategic decision comes from when to declare your combo. Whenever you have a combo in your hand, you can call it by placing your cards face down. If you indeed have a combo you will get a point card no matter what combo the other player plays. Playing the first combo gives you the tiebreaker over other players who would play the same combo that you played.

There are a lot of reasons not to play your combo right away though. First once you play your combo you can’t change it. This means that you give your opponents an opportunity to improve their hand while you sit there doing nothing. I would think in most cases that the second player to call a combo has an advantage since they have more time to improve their hand. If you call a combo too early you could be stuck sitting there for several turns while the other players have more and more opportunities to improve their hands. If you have a good but not great combo you might be better off just sticking in the game trying to improve your hand. Unless you already have the best combo you can get you might as well wait for another player call a combo first since you can immediately call your combo and the only thing you would have lost is the possible tiebreaker.

This actually illustrates another issue with the game. Unfortunately there is no way to protect against a player erroneously saying they have a combo when they don’t. Yahtzee Hands Down deals with this by making the player lose three of the cards from their hand which are replaced with new cards. This hurts that player but gives the other player who called a combo a big disadvantage in the game since everyone knows what combo they have. A player could be put in a situation where they just have to sit there while the other players get to improve their hands knowing what they have to beat in order to take the combo card. I think the game could have done something to solve this predicament.

Overall I think the chance cards add some interesting things to the game but at the same time could have been implemented better. I like the chance cards since it is a consolation prize to the player who had the lower combo. This also rewards players that declare combos earlier since they are guaranteed to earn some points. The problem is that the chance cards add even more luck to the game since some are way too valuable. You could end up earning more points by taking a chance card than the player that actually won the combo card. This actually happened in the game that I played.

Another situation that can arise in the game is that all of the combo cards remaining could require collecting cards of the same number. This actually happened in the game I played since the two straight cards were the first two combo cards taken. This presented a situation where there was no reason for a player to keep more than one number/color combination. Since the only way to score points was to get cards of the same number and color, every card that wasn’t a part of a set might as well have been discarded. This turned the game into an exercise of the players taking turns discarding cards until players were lucky enough to get enough of the same number that they could claim a combo.

I see one possible solution to this issue but it could create its’ own problems. The basic game has you using six of the combo cards. The game plays pretty quickly with this setup since most games shouldn’t take more than around fifteen minutes. An alternate way of playing the game is to use more of the combo cards. This could fix the aforementioned problem since it is less likely that the same combos would be collected twice before some of the other combos are collected. This will probably extend the game quite a bit though which could make Yahtzee Hands Down drag on for quite a while.

One idea that I think could add more strategy to the game while also speeding up the game would be to allow players to draw new cards from the discard pile along with the draw pile. I think this would speed up the game because I was constantly running into situations where the other players were getting the cards that I needed and they would end up discarding them. The other reason I think it would improve the game is that it would force players to be more careful about what cards they discard. If a player knows that the card they want to discard is a card that the next player needs, they may be more willing to hold it to prevent the other player from being able to take it.

Overall the components are what you would expect out of a basic card game. The cards are your typical cardstock. The cards are easy to read and do a good job not having any extraneous information. The cards’ artwork is a little bland though since they just feature dice in front of different colored backgrounds.

Yahtzee Hands Down is a very average card game. I had some fun with the game as it is quick and easy to play. The game does some interesting things with the Yahtzee formula and in some ways might have improved upon the original game. The game has some rules that could have been improved though and the game still relies heavily on luck which prevents it from being anything more than a very average game.

If you like more mainstream card games and don’t mind a game that relies pretty heavily on luck, I think you can have some fun with the game. If you hate Yahtzee or simplistic card games I don’t think it will be for you. If the concept interests you and you can find the game for cheap I think it might be worth picking up.