In the 1960s and 1970s the Ideal company was one of the most popular board game publishers. While Ideal made a lot of licensed games it was also known to make a lot of unique dexterity style children’s/family games. While some of these games caught on and have been reproduced over the years, there are a lot of Ideal games that were lost to time. Today I am looking at one of those later games, Wrestle Around. Wrestle Around is an interesting game as the whole game revolves around players tilting the gameboard to prevent their marbles from falling into the center hole. Wrestle Around is a fun experience unlike anything that I have ever played before but it relies too much on luck to the point where it might not be for everyone.

How to Play Wrestle Around 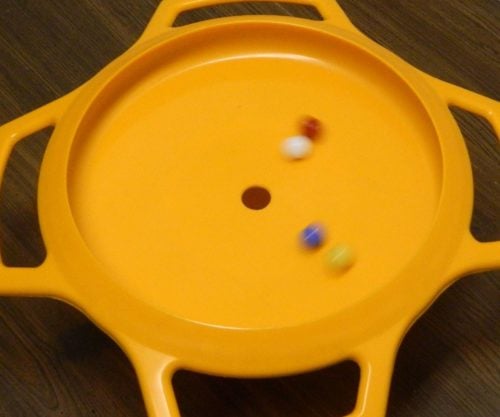 When one of a player’s marbles fall into the center hole, they must immediately place another one of their marbles on the gameboard. When a player loses all three of their marbles they are eliminated from the game. They remove their hand from their handle and can no longer impact the game.

My Thoughts on Wrestle Around

With how simple Wrestle Around is I didn’t know if I was going to like it. Basically the entire game revolves around tilting the gameboard to direct your own colored marbles away and the other players marbles towards the center hole. On the surface that doesn’t sound like much of a game. Yet I have to admit that it was surprisingly compelling playing Wrestle Around. Wrestle Around is far from a perfect game but you might be surprised by how much fun you can actually have playing the game.

I think the reason that Wrestle Around is surprisingly compelling comes from a couple things. At this point I have played over 600 different board games including quite a few weird dexterity game. Even after playing so many games I can honestly say that I haven’t played another game like Wrestle Around. It is always refreshing playing something unique that you have never played before.

For people who like quick games, Wrestle Around is the game for you. Unless the players do a surprisingly good job keeping the marbles away from the center hole, most games will only take a couple minutes at max. That is combined with the fact that you could probably explain the game to new players in less than a minute. With how quick each game is it is hard to not want to play another game. You could easily end up playing three or more games within ten minutes.

When you look at Wrestle Around you probably wouldn’t think that there is a lot of strategy in the game. For the most part I would agree with that assessment but there are some ways that you can impact the game.

First off the biggest advantage that you can have in Wrestle Around is to be stronger than the other players. If there is a significant difference in strength between the players it is going to impact the game. If a player is considerably stronger than the other players they will have a lot more control over the gameboard than the other players. They will be able to tilt the gameboard in their desired direction which they can use to prevent their marbles from falling into the center hole while also directing other players’ marbles into the center hole. While this doesn’t guarantee success, it does give a player an advantage. If all of the players have a similar arm strength though this isn’t going to play a big role in the game.

The second area of the game where I initially thought strategy was going to play a role was tilting the gameboard to guide marbles towards and away from the center hole. Before playing the game I thought players were going to have a decent amount of control over tilting the gameboard. I thought players could use this control in order to direct their marbles away from the center hole while moving the other players’ marbles into the center hole. After playing the game though I quickly learned that this doesn’t happen. If you are playing with all four players and all have a similar level of arm strength, no individual player is going to have much control over the gameboard. Unless all of the players are trying to tilt the gameboard in the same direction you will be lucky to tilt the gameboard much in your desired direction. The gameboard for the most part stays mostly upright and only occasionally tilts slightly.

While you could try to implement a strategy where you try to continuously guide the marbles, I wouldn’t recommend it. The first couple of games that I played I tried this strategy and I failed miserably. While luck wasn’t on my side either, I was the first player eliminated in every game. The reason this failed was that I was too focused on trying to guide the marbles that I wasn’t totally focused on keeping my own marble out of the center hole. Since no individual player has a lot of control over the gameboard, I just didn’t have enough control to keep my marbles from rolling into the center hole. The only way I see this type of strategy working is if you are significantly stronger than the other players which will allow you to overpower them.

After failing miserably I decided to try something new. I decided to focus on just my own marble. Instead of continuously trying to tilt the gameboard I switched to a more quick twitch strategy. When one of my marbles was near the center of the board I quickly tilted my handle. This usually did a good job of redirecting the marble away from the center hole. While a player can’t have a huge impact on the gameboard as a whole, a sudden tilt actually does a good job controlling the movement of the marbles. I believe this is the only real strategy that you can implement in the game. As soon as I switched to this method of playing the game I did much better in the game and was actually able to win.

Players can have a little more impact on the game than you would initially think but the game still relies heavily on luck. The main reason why the game relies mostly on luck is because no player has that much control over the gameboard. Since no individual has that much control you basically have to rely on the other players tilting the gameboard in the same direction as you. If the other players end up tilting it in the opposite direction there is nothing you can do unless you can overpower all of the other players. Your marble can be headed directly towards the center hole and if the other players are working against you there is nothing you can do to prevent the marble from entering the center hole.

The game also relies on luck since the marbles movement usually is pretty random. If your marble heads towards the center more than the other marbles you are at a clear disadvantage. In the first couple of games that I played my marbles seemed to make a beeline straight for the center hole time after time. While I could occasionally redirect them away there is no way that I was going to be able to continuously redirect my marbles away from the center hole. Some players will also get lucky where a marble will just randomly roll out of the center hole.

The other problem with Wrestle Around is that you really need to set some ground rules for players that are overly aggressive. The game only really has one rule where you can’t lift the gameboard off the table. Otherwise the game is a free for all. If there are some really aggressive players they can yank back and forth on the gameboard which kind of ruins the game and could even hurt one of the other players if they take it too far. I would suggest adding another rule that the gameboard has to basically stay in the same spot on the table for the entire game. I would also suggest that none of the players take the game too seriously. It is nice to win but it is not worth hurting another player in the process.

As far as the components are concerned Wrestle Around is quite solid for a game that is almost 50 years old. Basically the only things you get in the game is the gameboard and the marbles. The marbles are typical marbles from the 1960s. The gameboard is not much to look at as it is extremely bland but it does its job. The plastic is surprisingly thick and durable. While the gameboard will get scratches from gameplay I really can’t see the gameboard ever breaking unless you do something like throw it out a window. The one issue I have with the gameboard is that I wish it was designed a little differently. After a couple of games the handle can start to hurt your hand. I think this mostly has to do with the sides of the handle pressing against the sides of your hands as the gameboard is tilted in every direction.

Should You Buy Wrestle Around?

Wrestle Around is an unique experience. A game where you just tilt the gameboard to try and keep your marbles out of the center hole might not sound that interesting but you would be surprised. I have played a lot of different games and yet have never played something quite like Wrestle Around. There is just something compelling about the game which is complimented by the fact that the game is so short. Most people will likely want to play several games in a row. While each individual player doesn’t have a lot of control over the gameboard, if you tilt it at just the right time you can improve the odds of keeping your marbles out of the center hole. There is no denying that the game still relies a lot on luck though. Wrestle Around is also not a game that you will want to play for hours at a time and you will probably have to add some house rules to the game to keep overly aggressive players in check.

If Wrestle Around’s concept doesn’t really interest you I would expect that the game won’t be for you. If you like quirky dexterity games though you might end up liking Wrestle Around more that you would think.

If you would like to purchase Wrestle Around you can find it online: Amazon

Thank you for your explanation and for providing the rules and strategy I found this game at a garage sale today and will be looking forward to the youngsters to play it BUT before they do, I think my husband and I will have a go at it