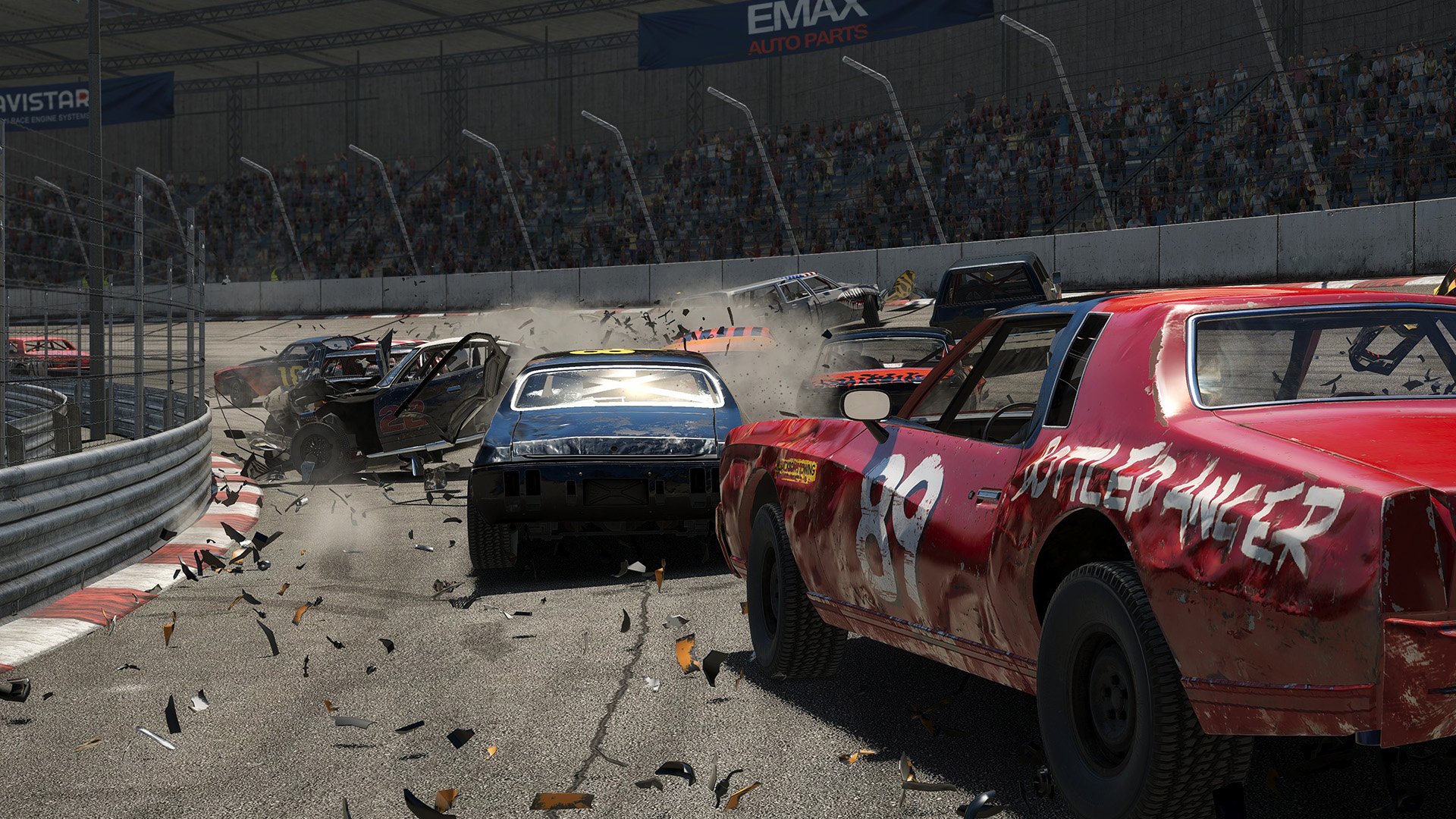 The racing game genre is one of the video game genres that I have always had mixed feeling about. I like racing games but a lot of them feel like more of the same. How much can a racing game really differentiate itself outside of the cars and tracks as the gameplay can’t change all that much. I have always found traditional racing games to be kind of boring as well. This is one of the reasons that I have always been more of a fan of nontraditional racing games. I have always been a fan of cart racers and have also liked racing games built around driving recklessly/destructively. When I was a kid I remember playing the original Destruction Derby on the original PlayStation and I was a huge fan of the Burnout series. I bring this up because the reason I was initially intrigued by the game I am looking at today Wreckfest is because it reminded me of those racers that focused more on reckless driving and destruction. After being in development since 2014 by Bugbear (the developers behind the FlatOut series), Wreckfest has finally made its way to consoles as it was released on PlayStation 4 and Xbox one yesterday. Wreckfest is a fun reckless racing game full of destruction that should delight fans of these type of racing games.

At first glance Wreckfest might seem like your typical racing game. Like every racing game the goal in most races is to place first in the race. Where Wreckfest differs from your typical racing game is that it is a “full-contact” racing game. While you can hit other cars in other racing games, it is usually not encouraged as it is usually to your own detriment as it will slow you down or spin you out. Bumping into the other racers in Wreckfest is not only allowed but encouraged. As all of the racers are using older more run down cars contact between the cars is an integral part of the races. Going around corners you can run into other cars using them as barriers to make it easier to get around corners. You are also encouraged to spin out other racers and bump them into walls and other obstacles.

I began this review by talking about how while I like driving games a lot of them feel like they are just more of the same. While Wreckfest has a lot in common with your typical racing game, it also feels different from your typical racing game. The fact that Wreckfest is a full-contact racing game actually has a pretty big impact on the game. It probably won’t be for everyone but I like the full-contact racing more than your typical racing game. There is just something really enjoyable about racing around corners and using other cars as a barrier to make it easier to make tight turns. Hitting the back of another car to spin it out or forcing another car to crash into an obstacle/barrier is so satisfying as well. This does lead to a little frustration though as you could be leading for most of a race and then have another car spin you out at the end losing you the entire race. This will force you to restart some races that you shouldn’t have to, but the racing is still really satisfying. It probably won’t be for racing purists, but I had quite a bit of fun racing in Wreckfest.

For the most part I would say that the controls work quite well. As you aren’t driving pristine cars like most racing games, the cars don’t have perfect handling. They tend to drift at times especially when going around the corners. Once you get a handle over how the cars drive though the controls work quite well. The game gives you a lot of customization over the controls allowing you to make the driving as simple or difficult as you want. You can change between automatic or manual gear shifting and you can tweak other parts of your car which will have an impact on how the car drives. It might take a little while to get the hang of Wreckfest’s driving, but after some adjusting the driving feels really good.

As contact is an important aspect of the game the developers have added a realistic damage mechanic to the game. Your car as well as the other cars will sustain damage based on where they crash into other racers’ cars and obstacles. Hit another car with the front right side of your car and the car will show damage in that area of the car. It isn’t all just cosmetic though as it also affects how your car drives. For example if you damage one of your wheels it will impact your steering. As the damage piles up it will become harder to drive your car.

I really liked the realistic damage mechanics in Wreckfest as they do a good job simulating what damage a car would sustain when getting into a collision. The dents and scratches bring a lot of character to the races as at the end of the race you can tell how many bumps/crashes you had during the race. Damage can have a noticeable impact on how the cars handle as well. I think the realistic damage works so well because the game’s visuals are quite good. From the cars to the environments the game looks really good. The visuals really shine in large crashes where cars are flying all over the place.

I would say that a majority of the events in Wreckfest are traditional races with the objective of getting first in the race. The game does feature some events where the contact plays a larger role though. The most prominent of these are the destruction derby modes. Basically in these modes you are either trying to cause the most damage or be the last car remaining. While I kind of struggled in these modes due to not really knowing the best strategy for them, I found them to be quite fun. There is just something enjoyable about crashing into other cars causing as much damage as possible. This also really highlights the destruction mechanics as cars will flip and fly all over the stage. These modes also play quite differently than your typical races making them good changes of pace.

In addition to destruction derby matches, Wreckfest differs from many other racing games because it isn’t afraid to add vehicles that you don’t typically see in racing games. Wreckfest includes races and destruction derby events featuring lawn mowers, buses, harvesters, three wheel cars, and even motorized sofas. While most of these vehicles are harder to handle than your typical car, there is just something really fun about driving really weird vehicles. I have to say that I had never experienced anything like a destruction derby featuring lawn mowers or a race featuring sofa cars. Some people might find these additions to be kind of silly (they are), but they are quite fun as well.

Another issue that I had with Wreckfest is that it could have provided a tutorial. I can see why the game doesn’t have a tutorial as the basic gameplay is quite straightforward as you are just racing cars. While the objective for the races is pretty obvious, a tutorial could have still been useful to give players advice on the game’s mechanics so they could race better. For example the game could have given you some advice on how to handle the cars and deal with the more aggressive racing aspects of the game.

I think Wreckfest could have really used a tutorial for the destruction derby events though. The basic premise of destruction derbies are pretty self explanatory as you are mostly trying to cause a lot of destruction/be the last car standing. What could have been useful though is the game giving you tips/strategy on how to approach the events. I personally never really understood how I was supposed to compete in the events. The game gives you a few tips during loading screens, but it doesn’t ever really instruct you on how to cause the most damage/wrecks while preventing your own car from being destroyed. This made the destruction derby events feel a little random as I didn’t know what I should do to wreck more cars and keep my car running for longer.

As far as length/replay value, I am unable to give you a definitive length. That is not all that surprising as how much time you get out of most racing games depends on the player. Wreckfest basically has a couple different modes. First there is the career mode. The career mode is broken down into different career championships. Each championship has a set of different events that you can compete in. You need to score enough points in those events to unlock more events in the current championship as well as unlock the next championship. The career mode has five championships. In addition the game allows you to create your own events. Wreckfest also has an online mode where you can play against other players. I would say that you could get quite a bit of time out of just playing through the events in the career mode. If you wanted to perfect the events though or are big into online races, I think you could get a lot of playtime out of Wreckfest.

Wreckfest might look a lot like your typical racing game, but it does a good job differentiating itself as well. I think the area where Wreckfest differs the most from your typical racing game is the emphasis on full-contact between the racers. The game encourages you to bump into other racers as you push your way through the pack. This includes a realistic damage system that both impacts your car cosmetically as well as its handling. This leads to a satisfying racing experience where you don’t have to race perfectly to win a race as you can impact the other racers. Wreckfest also includes a destruction derby mode which was fun even though I wasn’t very good at it. In addition to your typical cars Wreckfest also includes some of the weirdest vehicles that I have ever seen in a racing game. For the most part I enjoyed Wreckfest, but it does have a couple issues. First the load times can be quite long at times. The game could also have done a better job explaining some of its mechanics especially the destruction derby mode.

If you have never really been into racing games or prefer more traditional racing games, Wreckfest probably won’t be for you. People who think a racing game that encourages crashing and bumping into other racers sounds fun though should get quite a bit of enjoyment out of Wreckfest.