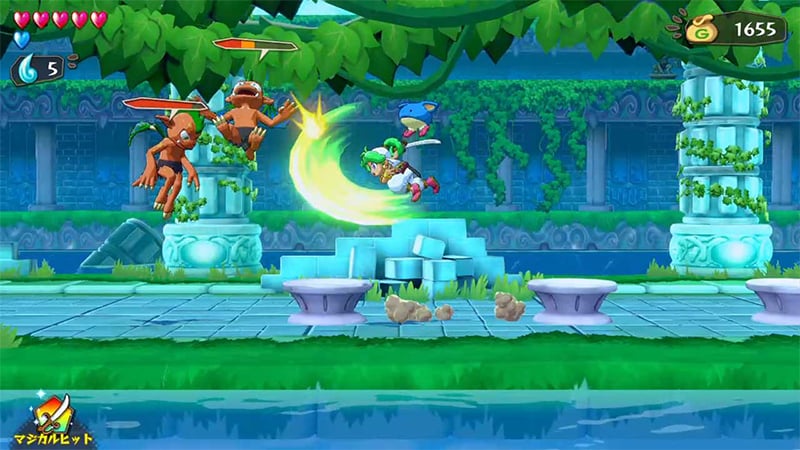 Back in the late 1980s and 1990s the Wonder Boy/Monster World franchise was quite popular. Between arcades and consoles the series ended up having six different games released in less than ten years. While the series was quite popular for a while, the series ended kind of abruptly in 1994 as no new games were created for the series for over 20 years. I have to admit that I didn’t really know much about the franchise until recently mostly because I don’t recall ever playing one of the games from the series before. I bring this up because I was able to check out the latest game in the series thanks to a review copy sent to Geeky Hobbies by the publisher. Wonder Boy: Asha In Monster World is a remastered version of Monster World IV with updated graphics and gameplay tweaks to further enhance the game. Wonder Boy: Asha In Monster World does a good job remastering a 25+ year old game bringing the enjoyable gameplay to a new generation of fans.

In Wonder Boy: Asha In Monster World you play as Asha. Asha is a young girl who has a strong connection to the spirit world and has recently becomes a warrior. She leaves her home when she senses that four spirits that help maintain order in the world are in serious danger. They have been trapped by evil forces that are plotting to throw the whole world into chaos. Asha gets helps in her journey from her new loyal companion, a blue Pepelogoo. Can Asha save the spirits and defeat the evil forces that threaten the world?

Wonder Boy: Asha In Monster World’s gameplay is probably best described as a side scrolling action platformer. While the remaster’s graphics are 3D, the gameplay for the most part takes place on a 2D plane. The game is broken up into a number of different locales with each having their own unique style and enemy types. The goal of each locale is to reach the end and defeat the area’s boss. To do this the game features two main gameplay elements. First there is the platforming which mostly involves jumping across gaps and reaching higher platforms. You are only given a single jump, but you can use your Pepelogoo for a double jump or a glide ability which helps with some of the more difficulty jumps. While exploring each locale there are a number of hidden objects to find and puzzles that need to be solved to open up a path to continue on your journey.

Outside of the platforming most of the gameplay revolves around the combat. For combat you are given a sword. With the sword you have one main attack and a magical attack which is charged up after a number of successful hits. You are also given a shield which blocks most attacks. Asha has a number of hearts, and will lose one each time you are hit by an enemy. If you should run out of hearts you will have to reload from your last save or use one of your healing items. As you explore the world you can acquire gold which can be used to buy better equipment increasing your attack or your number of hearts. You can also acquire more hearts by finding ten life drops which add one more heart to your total.

So before we get into my thoughts on Wonder Boy: Asha In Monster World, I want to begin by saying that I never played the original Monster World IV. Thus I had no nostalgia impacting my feelings towards the game. I also can’t make much of a direct comparison between the two games. I checked out Monster World IV a little as it comes included with the physical versions of the game. I played it a little after beating the remaster and they seemed very similar, but I didn’t play the game enough to know if they are exactly the same outside of the graphical upgrade.

With that out of the way, I have to say that I was actually a little surprised by Wonder Boy: Asha In Monster World. While the game has a few issues which I will get to later, for a remaster of a game that is 25 years old at this point I have to admit that the game holds up better than I thought it would. Most of the gameplay is very similar to what you would typically expect from the 2D action platformer genre. Today the gameplay may not be super original, but you have to keep in mind that the original game was made before many of the games that have since taken up the genre and innovated on it.

Despite the gameplay being pretty typical of the genre, it is still really fun. This is an good example of despite a game being 25 years old it can still hold up because the framework is enjoyable. The combat is kind of basic as you just need to get close enough to an enemy to hit it with your sword while avoiding their attacks. I wouldn’t say that the combat is particularly difficult as a lot of it involves button mashing while occasionally using your shield and avoiding attacks. The platforming is not particularly difficult either as there really aren’t any sections where you need really precise jumps. The game also includes some puzzles which are pretty typical of games from the 1990s. I think the main reason why the game works is that it does a good job reminding players about what was enjoyable about 1990s video games.

If you didn’t know better you might not even know that the game’s framework is 25 years old at this point though. This is why I think the developers deserve a lot of credit for their work with the game’s remaster. Basically the game took the original sprites and updated them into 3D models. The game does a good job towing the line between being loyal to the original, while also updating things where they still feel in place in 2021. The game uses a cell-shaded 3D look that does a great job blending the 2D original with a more modern 3D look. Fans of the original game should really appreciate what the remaster did for the original game.

Other than the new coat of paint, Wonder Boy: Asha In Monster World apparently has a few other tweaks to modernize the game. I am guessing most of these have to deal with the controls and some quality of life improvements due to the advancement of technology over the last 25 years. As for the controls I thought they were pretty good most of the time. The controls are usually pretty precise as most of the hits you take and the jumps you miss will be your fault. I did have a couple small issues with the controls though. First I am not a fan of the decision to have the shield mapped to down on the analog stick. The game has another button that you can press to use the shield other than the analog stick. By also mapping it to the analog stick you can be moving/running and the game will think that you want to use the shield. This could be partially due to my controller wearing out, but this can be annoying at times as you keep switching between using the shield and moving. Otherwise you will occasionally get stuck in a situation where you keep getting hit by enemies without any way of getting out of it before you lose several hearts. This was kind of frustrating at times.

As for the game’s difficulty I would say that it kind of depends. The game has two difficulty levels which are easy and normal. The normal difficulty is apparently comparable to the original game. The main difference between the two difficulties is that normal gives you less healing items. I ended up playing the game on normal and most of the time I didn’t find the game to be that difficult. As long as you take the time to try and find life drops you will acquire quite a few extra hearts which will allow you to take more damage without dying. The hardest part about most of the game is to try and limit the health you lose as the healing items are quite limited where you don’t want to waste them outside of the boss fights. As for the boss fights they can be quite a bit more difficult. They can vary a decent amount, but some of them required a couple of attempts before I could figure out the best way to avoid taking damage.

While I enjoyed playing Wonder Boy: Asha In Monster World, probably the biggest issue that I had with the game is simply the fact that the game is on the shorter side. This isn’t super surprising as the game was originally made back in 1994 where it was common for games to only take a couple of hours to complete. The game’s length will somewhat depend on how willing you are to look for objects hidden throughout the stages. If you just do the bare minimum the game will obviously take less time than if try to find all of the hidden items. I ended up searching for as many of the hidden items as I could and ended up finding around 90% of the life drops. Even with searching the locations pretty thoroughly, it only took me around four to five hours to complete the game. I really wish the game was longer as it felt kind of short. Mostly though I just wish it was longer as I was enjoying it quite a bit and then it ended.

Before wrapping up I wanted to quickly talk about the different versions of the game that are available. The game is available digitally as well as in a physical form. The main game is the same no matter what version you pick up. If you pick up one of the physical versions of Wonder Boy: Asha In Monster World though, you will also get access to the original version of Monster World IV as well as a few other goodies based on which version of the game you end up choosing. For physical versions the game has a standard, collector’s and mega collector’s edition.

I didn’t know exactly what to expect from Wonder Boy: Asha In Monster World as I didn’t really have much experience with the franchise and had never played Monster World IV which it is a remaster of. Despite the original game being over 25 years old at this point, I was honestly kind of surprised by how well the game has held up. Wonder Boy: Asha In Monster World has obviously gotten a graphical overhaul which does a great job remaining loyal to the original game while still looking quite good for a game released in 2021. The gameplay is pretty reminiscent of 1990s action platformers. There may have been quite a few games with similar gameplay made over the years, but the gameplay still remains enjoyable. The game does a good job capturing what was enjoyable about 1990s games from this genre. The controls have some occasional issues, but they work well most of the time. Probably the biggest issue that I had with the game was just the fact that the game was kind of short as it only lasts around 4-5 hours. The game is enjoyable while it lasts, I just wish there was more to the game.