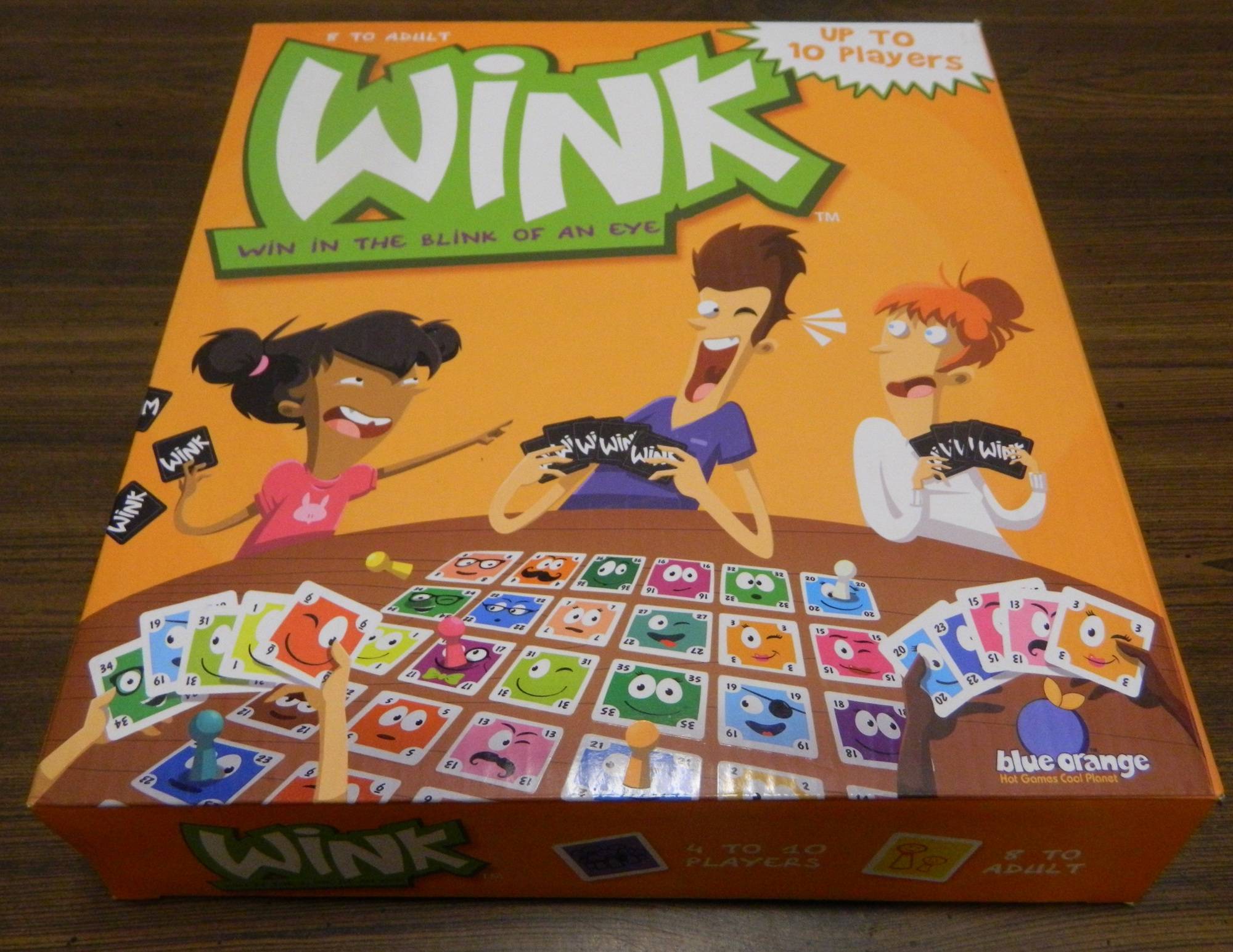 Zwinkern is a card game that was originally released back in 1994 in Germany. For over twenty years the game remained a German exclusive. In 2015 Blue Orange Games decided to finally release the game in English under the name Wink.  When you first look at Wink it looks like an odd game. A game of secret partnerships where you can only communicate through winks? That is not your typical party game. While there is no denying that Wink was a unique game it was left to be seen whether it was going to be a good game. While the game is silly and not something I would play all the time, Wink is a unique and enjoyable party game unlike anything you have probably ever played before.

How to Play Wink To begin the game each player will use their first turn to choose one of the cards on the table that they don’t have in their hand. The player also can’t choose a card that already has a pawn on it or is flipped over. They place their pawn on the card and announce to the other players which number they are looking for.

After each player has taken their first turn, a player’s turn begins with them guessing which player has the card corresponding to the number they chose in the previous round. At this point no players can wink to indicate that they control the card. There are two potential outcomes based on whether the player guesses correctly.

If a player discovers one of the secret partnerships they can use one of their accuse cards to accuse the players. These cards can be played at any time. The player announces the partnership and the number. There are two potential outcomes:

Under either outcome the player has to discard their accuse card. Any accuse cards that a player doesn’t use are worth one point each at the end of the game.

Wink can end in one of two ways:

Each player will count up the number of cards under their color card along with their unused accuse cards. Each card is worth one point. The player with the most points wins the game.

My Thoughts on Wink

I will admit that I didn’t really know what to expect out of Wink when I first picked it up. I generally like games made by Blue Orange Games but I will admit that Wink looked like a strange game. A game where players are constantly forming new secret partnerships that they communicate through winks? I have played a lot of games and yet I can honestly say that I haven’t played a game like Wink before. While I like silly games there is a limit to how silly a game can be and still be enjoyable. I worried that Wink was going to cross the line where it is too silly to be enjoyable.

After playing Wink I have to say that I was a little surprised. The game is not perfect but it was more enjoyable than I was expecting. Basically Wink is a deduction game with hidden partnerships. Instead of asking questions or looking at the other players’ cards, players have to find their secret partner through subtle winks. Instead of trying to figure out the other players’ identities, the goal is to communicate your identity to your partner discreetly while trying to catch the other players doing the same. This sounded silly at first but it is actually more fun than you would expect. The game is certainly silly but it doesn’t reach that level where it is more silly than enjoyable.

As far as how easy it is to catch players secretly communicating, it all comes down to how obvious the players are with their communication. When players aren’t really trying to hide their wink, it is pretty easy to catch them. If players are somewhat careful though it is pretty hard to catch them. You might have a strong feeling that two players are partners but you are probably going to be taking an educated guess. If you guess wrong you are going to lose one of your accuse cards for nothing which will cost you a point at the end of the game. The only way you are ever going to be certain is if you are looking at another player while they are in the process of winking towards their partner. In these situations it is pretty obvious that those two players are partners.

Generally I would say that the accusations didn’t come as often as I would have expected. I think there were only a couple in the entire game that I played. While this might be what always happens in the game, the lack of accusations might come down to a couple things . First my group is not big into taking unnecessary risks. We generally tend to play conservatively so a lot of players didn’t want to guess unless they blatantly saw another player winking because they didn’t want to lose one of their accuse cards. The other reason could be due to my group not being great at reading the other players. It is possible that our group just didn’t notice players winking at their partner. While I think there will be more accusations with more aggressive groups, I think there aren’t as many accusations in the game as you would think.

The game may be called Wink but I like that it actually includes the rule where players can choose an action other than winking if all of the players agree. I actually think it would be interesting trying different actions some easier to conceal and others that are much harder to conceal. I wonder if making it easier or harder to spot the other partnerships would improve the game. I even think it would be interesting to try a house rule where there is no designated action that you have to use to alert your teammate. I think this would be interesting to try as players would have to recognize which player is signaling them and the signal that they are using. I think it could lead to a lot of humor as players interpret something as a signal that wasn’t actually a signal. I think this house rule could even add more strategy to the game as players could be quite a bit sneakier with their signals.

I am also kind of curious on how the game would play with more players. The game recommends playing with four to ten players. We ended up playing the game with just four players. The game works perfectly fine with four players but I think the game might be better with more players. With more players there are more players to watch which will make it easier to conceal your signal but there are also more players watching you which could make it harder to hide. Also with the game being a party game, these type of games generally work better with larger groups. While I think ten players might get a little chaotic, I think Wink could work quite well with groups between six and eight players.

While I enjoy playing Wink I will say that it is not a game that I would play all of the time. The game is best in short doses. It is a game that I can see bringing out once every couple months. I can’t see playing the game every week as it will start to become pretty repetitive. The problem is that once you have played the game, the next game is going to be basically the same with each player getting different cards. One of the best things about the game is the novelty which will be lost if you play the game all of the time. Taking time between games will keep the game fresh and enjoyable. If you are looking for a game that you are going to play regularly I don’t think Wink is going to be the game for you. If you don’t mind bringing out the game every couple months though I don’t see this being a big problem.

While I would say that the game relies more on skill than luck, luck still plays a bigger roll than I would have liked. Luck comes into play in a couple ways. First there are going to be some players that are better at the game than others. Some players will just be better at discretely giving signals and recognizing them. If a player is forced to regularly work with a player that is worse at the game they are going to have  a hard time winning. The game also relies on luck due to the cards you end up choosing to place your pawn on. Since some of the cards won’t be controlled by any of the players, if you pick one of these cards you have no way to score a point that round. If you end up picking several of these numbers you are at a significant disadvantage in the game.

Having looked at quite a few Blue Orange Games in the past, I have come to expect pretty high quality out of their games’ components. Things aren’t any different with Wink. The game mostly just comes with cards and the player pawns but they are nice. The cards’ artwork might be a little simple but I overall like the game’s style. Basically you get what you would expect out of Wink’s components.

The only real problem that I have with game’s components is that Wink is a game that you don’t really need the actual game to play. All you would need is two decks of cards that have the same cards. You could even take two decks of standard playing cards and remove the same cards from both decks until you have 36 cards remaining. Then all you would need is some type of marker for each player to indicate which card they chose for the current round. While the game is pretty cheap, if you want to save the money you could easily make your own copy of the game.

Should You Buy Wink?

Basically to sum up Wink I would say that it is a game that some people will love and other people will hate. Just looking at the premise Wink looks like a really silly game and it is. I was surprised by how much I enjoyed the game though. Wink is unlike any other party game that I have ever played. It is a unique experience trying to pass information to another player just by winking. While the game has more luck than I would have liked, I have to say that I was surprised by how much skill there is in the game. Some people are going to be better at the game than others as you need to be able to make your winks noticeable enough that your partner will notice but not so obvious that everyone else will also notice. While I enjoyed Wink I would say that it is more of a game that I would occasionally play instead of a game that I would play all of the time.

My recommendation for Wink basically comes down to what you think about the game’s premise. If the idea of the game sounds silly/stupid to you, I can’t imagine you enjoying Wink. If you like party games though and the premise sounds interesting I think you will enjoy the game. If you can get a good deal on the game I would probably recommend picking up Wink.

If you would like to purchase Wink you can find it online: Amazon