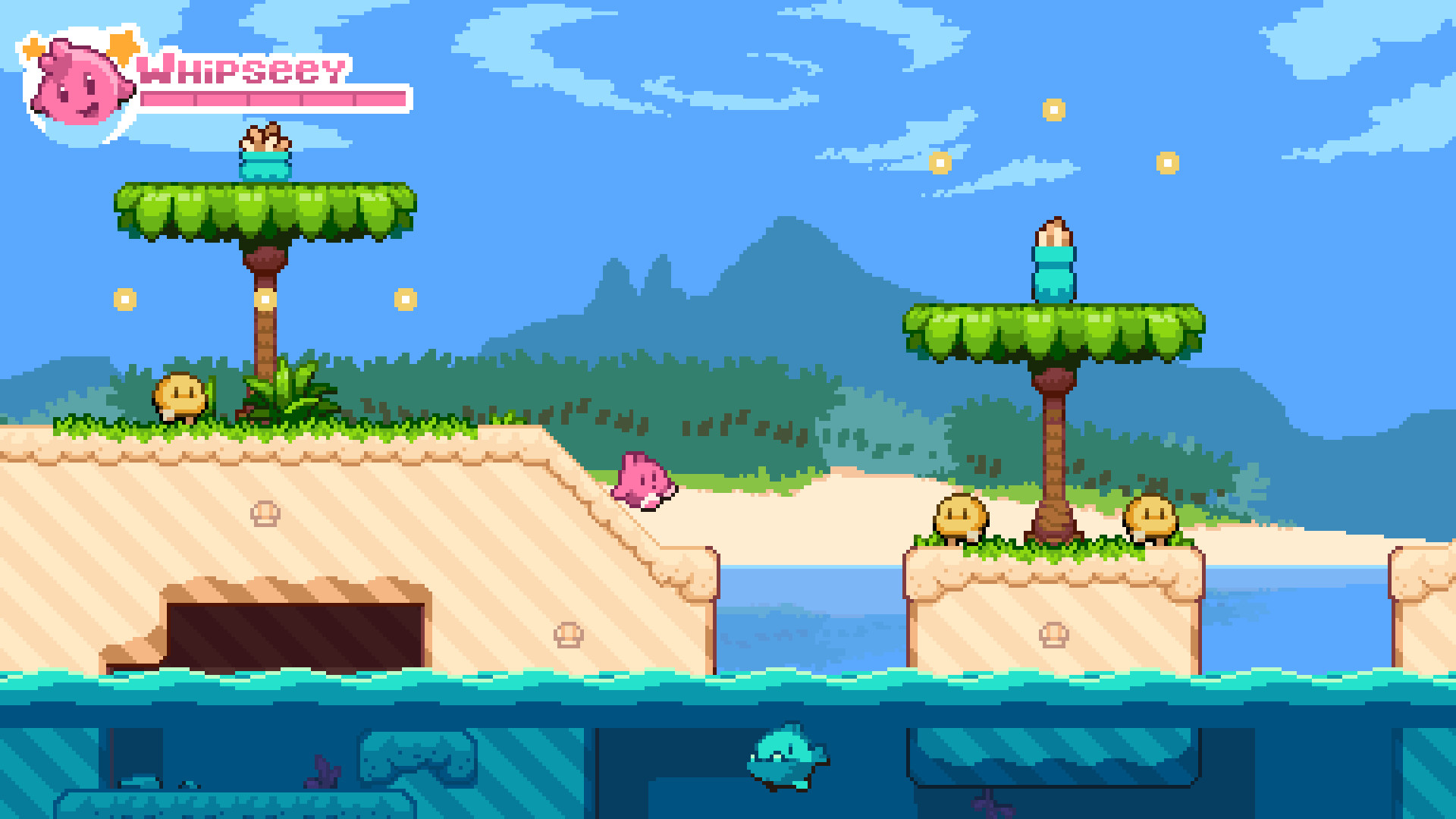 In Whipseey and the Lost Atlas you play as Alex. While reading a book he is sucked into it and transported to a strange world. He is also transformed into a small pink character known as Whipseey. In order to return home and to his human form, Alex must discover the secrets behind the Lost Atlas which transported him to the strange world. This involves exploring the world of Whipseey to find the key to returning home.

If the trailer and screenshots didn’t already make it pretty obvious, Whipseey and the Lost Atlas is your traditional 2D platformer. The goal of each set of levels/worlds is to reach the end of the world and defeat the boss to proceed to the next world. Each world consists of a set of stages with most worlds having ten to twenty stages. The length of these stages can differ from just one screen to a pretty long scrolling stage. In order to make it to the next stage you need to jump over obstacles and make it over pits. This is pretty much what you would expect out of your typical 2D platformer. When you reach the edge of a stage you will enter a door which takes you to the next stage.

In addition to your typical platforming gameplay you also get access to a whip. This whip can pretty much be used at any time. It can be used to latch onto rings in the world to swing across long gaps. It is mostly used for combat though. The combat in Whipseey and the Lost Atlas is pretty typical of the genre. You can jump on enemies heads which usually stuns them. You can also use the whip to hit enemies which will destroy them. Most enemies only take one hit to be killed, but some require you to hit them multiple times or when they are in a specific state. When enemies are killed they drop coins/jewels. These coins give you another life when you acquire 100. These extra lives are important because you are only given five lives plus the lives you acquire to complete the entire world. If you lose your last life you have to begin again at the beginning of the world.

I think the main reason that I enjoyed Whipseey and the Lost Atlas is that the controls are simple and responsive for the most part. The game basically has three controls. You move back and forth, jump, and use your whip. Despite only having three mechanics, the game does a good job using them to make a fun gameplay experience. The controls work well most of the time as the only times I had any issues were when I used the whip in the air. These issues were rare as well. The jumping mechanics are satisfying and whipping enemies is surprisingly fun. The key to a good platformer is responsive controls, and Whipseey and the Lost Atlas does a good job with the controls.

Other than the controls I also really liked the atmosphere created in Whipseey and the Lost Atlas. One look at the game and you can tell that it was inspired by 1980s and early 1990s platformers. The worlds are colorful, unique and cute. The main character of Whipseey reminds me a lot of Kirby. Even the enemy designs and locales remind me a lot of games like Kirby and other similar 2D platformers. The game’s pixel artwork and cute style are charming. Each world looks unique and is something you want to explore. I will say that the story is pretty basic though. You pretty much get an opening group of pictures outlining the basic story and another set of images at the end of the game. While I wish the story was a little deeper, this is not that surprising as games from the era that the game is emulating didn’t have particularly deep stories.

Next lets talk about the boss fights. These boss fights generally involve avoiding the enemy’s attacks and whipping them until they run out of health. Each enemy has a set of attacks that you have to recognize and avoid in order to win the fight. These boss fights are pretty good. The bosses are quite creative in their design and their special attacks. The key to each boss fight is finding the tells for each attack and how to avoid them. The boss battles require you to hit the boss quite a few times so it is key to avoid the attacks as your health otherwise won’t last. Once you learn how to avoid the attacks though the fights become pretty easy. You just wait out the attacks and then hit them until they are defeated.

Speaking of difficulty I would say that is it one of the issues that I had with the game. It doesn’t ruin the game but I wouldn’t consider Whipseey and the Lost Atlas to be a particularly difficult 2D platformer. The jumps are pretty easy as the game gives you plenty of space where you don’t need to perfectly time a jump. When you factor in the glide ability you probably aren’t going to die that much due to the platforming mechanics. This is a good thing as each time you fall into a pit you lose a live and have to restart at the beginning of your current stage. The combat isn’t all that difficult either. As you can kill most enemies with just one hit, you can kill most of them before they even pose any danger to you. The only time you will probably take damage from the enemies is while jumping and landing. Anyone with any experience with 2D platformers probably won’t have too much trouble with Whipseey and the Lost Atlas. If you are looking for an easier platformer you should enjoy your time with Whipseey and the Lost Atlas as this won’t be a big issue. You might feel a little disappointed though if you are looking for a challenging game though.

I would honestly say that most of your deaths in the game will come from what I call “cheap deaths”. What I mean by cheap deaths is being pushed into pits or obstacles that are immediate deaths. At points in each world there are areas where enemies like to sit at the edges of platforms and hit you when you try to land on the platform. The damage itself isn’t bad, but them knocking you back is a big problem. They will regularly hit you back far enough that you will fall down the pit. I would say that around 90% of my deaths in the game came from these type of situations. While these situations add some difficulty to the game, they can also become frustrating and feel a little cheap. They wouldn’t be so bad except when you lose your last life you are sent back to the beginning of your current world. Instead of these type of deaths I wish the game would have just made the rest of the game more difficult.

Whipseey and the Lost Atlas being quite easy leads to my biggest issue with the game. While I enjoyed my time with the game, it ended far too quickly. I literally completed the entire game in an afternoon. The game has five worlds and around 100 stages. A hundred stages might sound like a lot but most can be beat in less than a minute with some only taking seconds. This means that each world only takes 5-10 minutes to beat if you don’t die and have to restart. When you factor in deaths and restarts the time goes up some. If you were to be able to beat all of the worlds on your first or second attempt you could probably beat the whole game in around 30 minutes to an hour. With the deaths I think most people could beat the game in around 2-3 hours. The game also doesn’t have a lot of replay value as there aren’t any collectibles as far as I could see. So the only reason to replay the game is if you want to play through it again. This leads to the game being short and sweet. I enjoyed the game and just wished that it was a little longer. The good news is that the game only retails for $6 so the length isn’t as big of problem as it could have been.

Basically Whipseey and the Lost Atlas is a good but not great 2D platformer. The game shares a lot in common with 2D platformers from the 1980s to early 1990s. You basically jump between platforms and whip the enemies that get in your way. The game is fun and satisfying mostly due to the controls being pretty responsive. The game also creates a cute and charming atmosphere. Whipseey and the Lost Atlas is on the easy side though. Outside of getting knocked into pits by enemies, you aren’t going to have many troubles in the game. This leads to the game being quite short. Most people should be able to beat the whole game in around 2-3 hours. Whipseey and the Lost Atlas is a fun game that I enjoyed and fans of retro 2D platformers should enjoy as well. It has some issues though that prevent it from being perfect.

Whipseey and the Lost Atlas