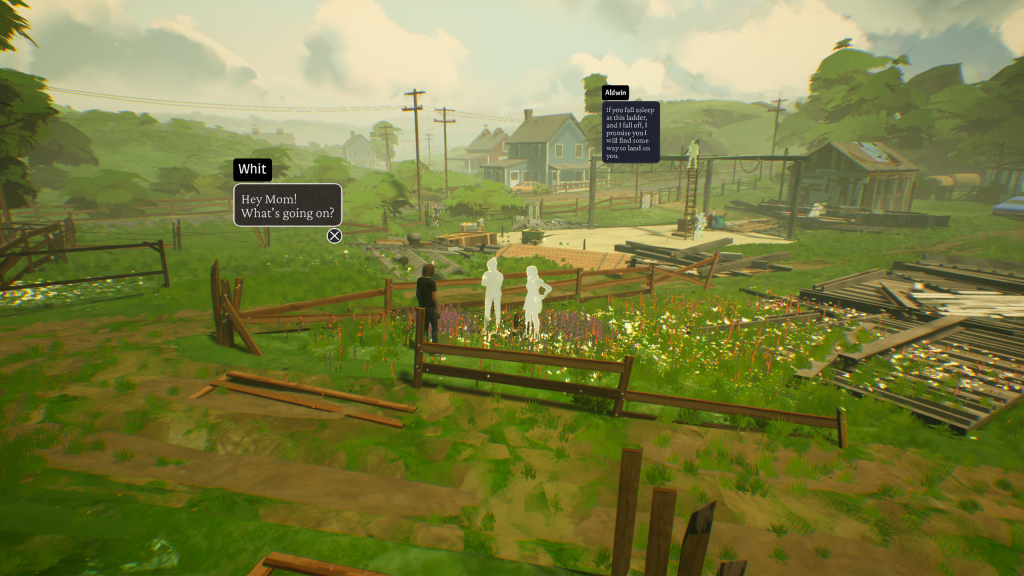 The video game industry has toyed with the idea of player decisions impacting the story and gameplay for quite a few years at this point. This concept in theory is a great idea for the industry as it should make games more immersive as players feel like they are actually having an impact on the game. While there have been some games that have used the concept well, there have been just as many that promised your decisions would matter when in fact they really didn’t. As this premise has always interested me, I am intrigued when a new game comes out that teases player decisions having a big impact on the rest of the game. This brings me to Where the Heart Leads which released today. Where the Heart Leads is not going to be for everyone, but it has some truly unique ideas where your decisions feel like they truly matter.

Where the Heart Leads tells the story of Whit Anderson. One stormy night a giant sinkhole opens up on Whit’s property trapping the family dog. In the process of saving his dog, Whit falls down the hole and arrives in a realm that allows him to interact with key moments from his past, present, and future. With the ability to analyze his life, is Whit truly happy or does he want to change things?

If I were to describe Where the Heart Leads I would classify it as a story driven game with a big emphasis on player choice. Basically the game takes place over decades of key moments in Whit’s life. For each key moment in his life you are set loose in a open area filled with characters and objects that you can interact with. The gameplay mostly involves walking around the area talking with people and picking up objects to solve very basic puzzles. This leads you down a number of side stories of the people important in Whit’s life. Throughout each of these sections you will be presented with key decisions that you have to make. These decisions are important as they will impact how the rest of the story unfolds. Once a decision is made it is final (unless you decide to load a previous save), and you will have to deal with the consequences of it for the rest of the game.

So I am going to just come right out and say it, Where the Heart Leads is a game that will have sort of a niche audience. For the most part the game is a story driven game where you basically walk around talking to people and making decisions that will impact the story going forward. This involves a lot of reading as there is no voice acted dialogue in the game. The game doesn’t really have any action sequences and doesn’t rely on skill to proceed. There isn’t even a way to fail the game. You could make decisions that lead to a bad ending in your opinion, but the game won’t really test your gaming skills as in a way it feels like more of an interactive story. Because it is not your typical video game, it is not going to be for everyone. To enjoy the game you need to like story driven games. If you are more interested in action or skill based gameplay, it won’t be for you.

With that out of the way lets discuss my thoughts on Where the Heart Leads. I was initially intrigued by the game as I generally enjoy a good narrative driven game, and with the emphasis on each decision actually having a real impact on the overall story I was curious about how the game would turn out. There have been a number of games that have promised that your decisions would have a lasting impact on the story, and some have lived up to that claim. Most don’t though as your decisions only play a minor role in the story until possibly the ending.

While I haven’t explored a lot of the different narrative paths through Where the Heart Leads, I have to say that I am genuinely impressed by the fact that the game actually seemed to live up to the fact that each decision you make has an impact on the story going forward. Each decisions plays a part in your final ending (there are apparently quite a few different endings to the game), but also has an impact on the story going forward. Your decisions in one section will be addressed in future sections and will change what you can and can’t do. This impacts the world itself and your relationships with the various characters. This really makes it feel like your decisions actually matter in the game as your experience will immediately change based on the decisions you choose to make instead of having to wait for the end of the game to see the outcome of your choices.

Since Where the Heart Leads is a story driven game, your enjoyment of the game is going to rely heavily on your thoughts on the story. I am not going to get into specifics, but I would say that a lot of the story is about analyzing your life to see whether what you are currently doing is truly making you happy. A lot of the story is about choosing between your passion or the safer/more practical option as well as choosing between family/friends and your job and other responsibilities. The story is crafted around how each of these choices impact how your life turns out.

I will say that I actually felt the story started off a little slow. The early parts of the story are not bad, but the game does take a while to truly get going. I think part of this is because it doesn’t feel like your decisions have a big impact on the storyline as this becomes more evident as you progress in the game. Once you familiarize yourself with the characters more, you become more invested in what happens to them. I wouldn’t say that the early story is bad, but I will tell players that if you are a little disappointed by it, I would recommend sticking with it as the story picks up.

Overall I thought the story was pretty good. It is not going to be for everyone, especially those that aren’t really into story driven games. Those that want a good character driven story are likely to enjoy the story quite a bit though. Much of the story is about the general struggles of life as the story is pretty grounded outside of the giant sinkhole that somehow allows you to visit moments of your own past and future. I think the characters themselves are what really drive the story. Whit is a loving father that struggles with pursuing his passions versus doing what is the practical and best for his family/friends. Along with Whit’s story, you follow the story of his wife, kids, brother, parents, and friends. The story is also an examination of life in a small town as it struggles between remaining true to its past and keeping up with the times. The story is interesting and does a good job making you analyze your own life to see if you are truly happy with how you are currently spending it.

One thing that I haven’t really talked about so far is the game’s gameplay and controls. This is mostly due to the fact that the gameplay/controls aren’t usually a big deal in these type of games as you don’t need precise controls in order to play them. Generally the game’s control scheme is pretty straightforward. They do contribute to one of the issues I had with the game though. Basically you just walk around and press a button to talk with characters and interact with objects. The problem with the controls is that the game sometimes requires you to be in a pretty specific location in order to interact with something. This leads to times where you have to walk around in a circle until you find the exact right spot needed to interact with something. On top of this there are times where the environment gets in the way making it hard to see what you need to interact with. This is far from game breaking, but it can become kind of frustrating after a while.

As for Where the Heart Leads’ length, I can’t give you an exact length. This is mostly because it kind of depends on how you approach the game. If you rush through the story doing the bare minimum it will obviously take less time than someone who takes their time exploring and finding everything that the game has to offer. I will say that I was actually kind of surprised by the game’s length as it is longer than most games in this genre. On top of this it has quite a bit more replay value than most games from this genre. As your decisions actually make a difference on the overall story, I actually see a reason to go back and try out some of the other paths as things should differ enough where it won’t feel like you are playing through the exact same story a second time. This won’t be for everyone as there will be people happy with just one playthrough. I applaud the game for this though as it is rare to find a story driven game that actually has some replay value.

Where the Heart Leads is truly an interesting game that crafts a unique experience different from any other game that I remember playing. While it is at its heart a story driven game, it actually relies pretty heavily on the fact that each decision you make in the game will have an impact on the story and gameplay moving forward. In a lot of games your decisions having an impact feels like a gimmick, but you can actively see how each decision impacts the story in Where the Heart Leads. This makes you really consider what is going on in the story as you have a direct impact on what ultimately happens. The story starts a little slow and won’t be for everyone. The characters are well written though, and the game does a good job making you analyze the decisions you have been making in your own life. The story is generally quite good and is actually longer than I was expecting especially when you factor in checking out alternative choices to some of the decisions. The gameplay is kind of limited though which isn’t helped by the controls sometimes being a little finicky where you have to be in the perfect position in order to interact with something.

My recommendation for Where the Heart Leads depends on your feelings towards the premise and story driven games in general. If you don’t really care for the genre or don’t find the premise to be all that interesting, I don’t see the game being for you. Those that are intrigued by the game’s premise though should enjoy Where the Heart Leads and should consider picking it up.

Where the Heart Leads