How to Play What Were You Thinking?

To begin each round the current player spins the spinner. The player draws a card and reads the question out loud that matches the color that was spun. If the spinner lands on a black space, follow the directions on the space. The current player then flips over the timer and each player writes down their answer(s). If a question asks for multiple answers, the player can only write down as many answers as are called for by the question. 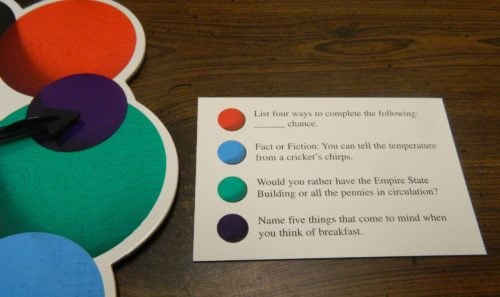 Since purple was spun, the players have to think of five things that come to mind when you think of breakfast. 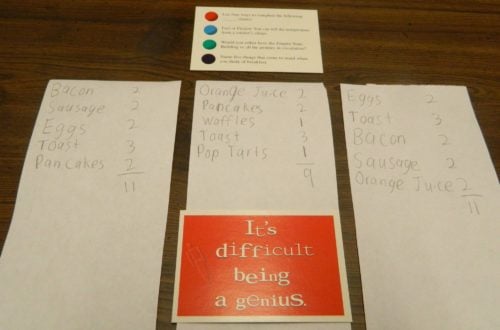 In this round the players had to name five things that come to mind when they think of breakfast.  For example all three players wrote down toast so each of them will receive three points for that answer. The middle player has scored the least amount of points so they receive a penalty card.

The player to the left of the current player then starts the next round.

My Thoughts on What Were You Thinking?

While What Were You Thinking? is never going to be considered an original game, that doesn’t necessarily mean that it is a bad game. If you like these type of games I think you will also like What Were You Thinking? I wouldn’t consider it to be a great game but I had fun playing the game. In the right atmosphere these type of games can be enjoyable as you try to match the other players. The game is also easy to pick up and play. I think it will work well at parties as it will only take a couple minutes to explain to people who have never played the game before.

What Were You Thinking? is never going to be confused for a strategy game but the premise behind the game actually leads to some interesting decisions. In most games you are usually going to want to give the right answer or the answer that personally applies to you. While that can also be the case in What Were You Thinking?, you also have to think about the fact that the ultimate goal is to try and match the other players. Instead of providing the correct answer or the answer that applies to you, it might be wiser to answer how you think the other players will answer as that will get you more points. The other players might be thinking the same thing though and thus will answer how they think you will answer. This can lead to some interesting decisions as you decide what you think the other players are going to do.

One thing that I found a little odd about What Were You Thinking? is that it might be the only game that I have ever played where one player loses while the rest of the players win. I find it odd because most games would handle the end game differently. I think a lot of games would either have the player with the most combined points or least penalty cards after a certain amount of rounds win the game. I will admit that the idea of all but one of the players winning the game makes sense with the game being about trying to match the other players.

As the cards are the only real reason to purchase the game, it is good that the game comes with a lot of cards. The game has 500 different question cards with each card having four questions leading to a total of 2,000 questions. That is a lot of questions. Unless you get unlucky or you play the game all the time you will never have to play the same questions more than once. Even if you do play the same question again, the likelihood that everyone answers the same is pretty unlikely.

The quality of the questions are a little more hit and miss. I generally didn’t really care for the true/false and multiple choice questions. The problem with these questions is that with so few choices it becomes kind of random who will lose the round. Lots of the rounds end with all of the players tied but otherwise you have to hope you were thinking the same way as the rest of the players. If I were to play the game again in the future I think I would probably just ignore the multiple choice questions entirely. The questions that have you writing down five answers are much better as they give the players more choices and the scoring is more interesting as you have multiple answers to match. Some of these questions are a little hit and miss as some are quite good while others won’t really work with some groups. The biggest problem with the quality is that around 50% of the questions are worthwhile but the other half rely on multiple choice or just don’t work that well.

Should You Buy What Were You Thinking?

What Were You Thinking? is a very average party game when you break it down. The game is far from original as there are a lot of other party games that have basically the same gameplay of trying to match the other players. While you can get the same gameplay out of quite a few other games, it doesn’t mean that What Were You Thinking? is a bad game. I had fun with the game and if your group enjoys this type of game you will probably have fun as well. The biggest problem with What Were You Thinking? is that you don’t really need the game to play it. Basically the only reason to purchase the game is for the cards. The game does include a lot of cards but they can be a little hit or miss.

If you don’t really care for match the other players party games, there is nothing for you in What Were You Thinking? If you don’t mind coming up with your own questions there is also no real reason to purchase the actual game. If the game sounds interesting to you though and you want a lot questions to play the game with it might be worth purchasing What Were You Thinking?

If you would like to purchase What Were You Thinking? you can find it online: Amazon