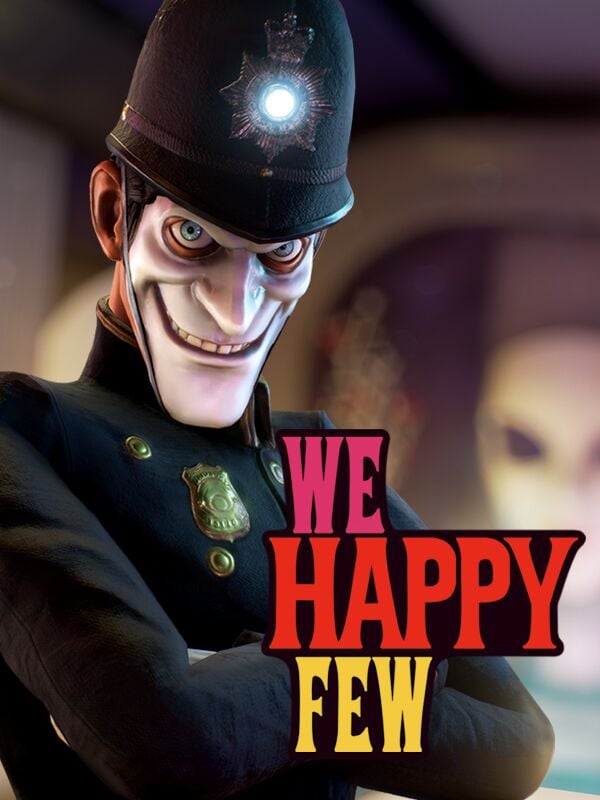 Welcome to Wellington Wells, England. Everything seems normal except that the people seem a little too happy. It turns out that you are in an alternative version of 1960s England where almost all of the civilians are under the influence of a drug called Joy that makes people so happy that they can’t see the misery around them. You play as a character that has awoken from the haze caused by the pills to see that things aren’t as happy as they seem. The civilians still on the drug don’t appreciate someone raining on their parade though so they throw you into a part of town designated for you and all of the other gloomy people.

We Happy Few is an interesting blend of a survival game, a stealth game and an action game. Basically your goal in the game is to complete missions and acquire items that you need in order to succeed in your escape from Wellington Wells. Being a survival game you need to make sure you get enough food, water, and sleep or you will die. You also need to blend in with civilians who are and are not on joy or you could end up getting attacked.

At this point it appears most if not all of the game’s mechanics are currently in the game. These mechanics work well for the most part. The scavenging and crafting are fun. The game already has quite a few different items and different ways to use items to craft better items. The combat works fine even though I wish there was a little more to it than just attacking and blocking. You usually want to avoid combat though so this isn’t a big deal. We Happy Few could use some work in some areas but has a good foundation to build off of.

One thing that I think is a good idea for the game is that you have the choice of whether or not you want to play the game with permadeath. In this mode if you die once, you lose all of your progress and have to start over from the beginning of the game. I personally am not a huge fan of permadeath since I hate losing progress. Some people really like the challenge though since it makes the game much more interesting to them. At this stage I think it would be really hard to beat the game with permadeath but I like that the game gives you that option.

The thing that first interested me in We Happy Few was the story/atmosphere. We Happy Few felt like Bioshock sharing alternate timelines that have diverged significantly from our own. While We Happy Few doesn’t play much like Bioshock, it has a similar atmosphere/feel to it. The game is kind of creepy but also interesting at the same time. I want to find out more about the game’s world and find out why the world has decided to devolve into madness where almost everyone takes happy pills. I think the story/atmosphere of We Happy Few has so much potential.

The one catch with the story is that outside of the opening area, the game’s story is not that flushed out at the moment. You will encounter various newspaper stories that will give you some details about what happened in the world but most of the game’s storyline is not currently in the game. This is understandable since this seems to be one of the areas where the developers seem to be using Early Access for. The game’s world feels a little empty at this time. If the final game’s atmosphere matches that of the opening though, We Happy Few will have an immersive story/atmosphere.

As a whole I enjoyed We Happy Few and I think the game has a ton of potential. There are a couple issues I have with the game in its’ current state though.

First with the game being a survival game, you need to keep yourself alive. This means that you need to eat, drink, sleep, and keep your health up. These systems work but I think they currently deplete way too quickly. I felt I needed to spend too much time eating and sleeping that it kind of took away from the experience. I thought the hunger was the worst especially early in the game since most of the food you can find is rotten or damaged in some way. The problem with this is that it occasionally makes you sick when you eat this food. Since I couldn’t find a lot of other food early in the game I was forced to eat this food which meant that my character got sick quite a bit which causes other problems.

Second the game doesn’t give you a lot of direction when you first start playing it. This means that you will spend a decent amount of time just wandering around figuring out how to play the game. Eventually you learn how to play the game and then it is pretty easy to play. I think the game could do a better job introducing the different mechanics to players though. As more of the story is added to the game I am guessing this will be addressed.

Being a game where you have to scavenge for things needed to make different items, the game needs to do a better job randomizing the creation of objects. I spent over an hour looking for one item that I needed to craft an item needed to proceed to a new area of the game’s world. After a while it got a little dull just looking through the same buildings over and over again looking for a specific item that I needed. While I can see making some items hard to find, an item that is so critical early in the game should be a little easier to find.

Being an early access game it should not come as any surprise that there are some bugs in the game. That is to be expected with a game that is six to twelve months away from completion. If you were looking for a perfect game you are not going to get it. While playing the game you will encounter the occasional bug/glitch. I encountered a weird bug where I opened up the map’s legend and I was locked in the legend and couldn’t access anything else on the map until I quit the game. I also had some issues with some of the quest lines. The quest lines would point me to a location and then I couldn’t do the necessary action at that location. Some items that were needed for some quests also didn’t seem to exist. It is possible that you won’t be able to beat all of the quests at this time. As the game is further developed though these issues should be resolved.

I enjoyed my time with the game but at this point I don’t think I would play it a lot more than five or six hours until after some updates. The game’s basic mechanics are fun but they get a little repetitive since you are pretty much just collecting items with the occasional mission to complete. I don’t see a lot of people getting tens to hundreds of hours out of the game at this point.

We Happy Few is a classic example of an Early Access game that has some bugs/issues at this time but shows a lot of promise. The game already has quite a few interesting mechanics and with some further development should be really good. While most of the story is not currently in the game, the story/atmosphere has the makings of a very interesting story if they are developed correctly. At this point I would say that the game is a good first step. I believe the game will develop into a very good game in time. At $30 though you will have to make your own decision on whether to take a chance on the game now or wait until the game is further developed.