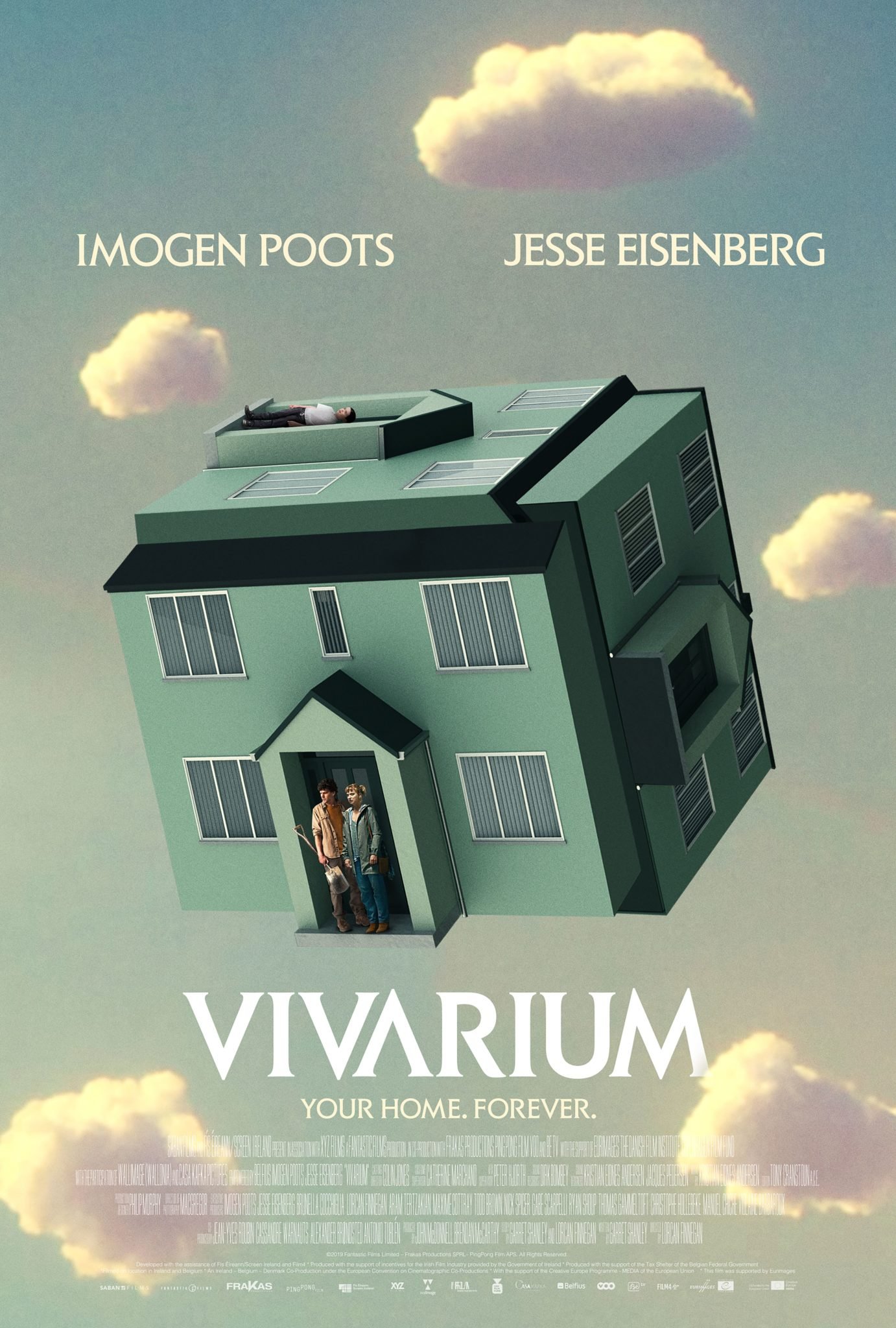 In today’s Hollywood a large majority of the movies created are sequels, superhero movies, or movies that follow a pretty generic cookie cutter formula. Studios generally don’t like to take chances with genuinely unique premises. While I like superhero movies and blockbuster films, I always appreciate a movie that tries to do something original for once. This is what intrigued me about Vivarium as it had a truly unique premise. A young couple getting stuck in a creepy suburb community where all of the houses look the same seemed like a really interesting premise for a sci-fi mystery. Vivarium has a genuinely interesting premise and atmosphere with good acting that unfortunately drags at times due to stretching its plot too thin.

Young couple Gemma (Imogen Poots) and Tom (Jesse Eisenberg) have been looking for a home for a while. They eventually stumble upon a new housing development called Yonder where every single house looks the same. They are given a tour by a strange real estate agent who shows them house number nine. As they explore the house the real estate agent disappears. When Gemma and Tom try to leave Yonder they are unable to find a way out no matter which direction they travel as they always end up at house number nine. They are eventually given an opportunity to escape when a package arrives in front of their house. Inside the package is a baby boy with the instructions to raise it in order to escape their current predicament. Will Gemma and Tom finally find a way to escape Yonder or will they be stuck there forever?

I honestly can sum up my feelings about Vivarium in just one word. That word is weird. Weird shouldn’t be construed as the movie being great or bad as I honestly don’t think either apply to this case. There really isn’t any better way of describing the movie though. From the premise to the style and the plot, the word weird does a genuinely good job of describing the movie. As a fan of weird/wacky premises this is what initially intrigued me about Vivarium. The premise behind the movie seemed like something that would be right up my alley as I appreciate movies that try something new. In some ways that works in the movie’s favor and in other ways it doesn’t.

Vivarium‘s greatest strength is probably the fact that the movie has a lot of style. In a lot of ways the movie reminds me of what you would expect from a Tim Burton film (the movie was not made by Tim Burton). The movie has a genuinely unique style which works well for the movie. The world of Vivarium is quirky and unique. The neighborhood of Yonder with houses stretching for miles looking exactly the same is both kind of creepy and whimsical at the same time. I think the movie deserves a lot of credit for the atmosphere that it creates because it has all of the makings of a really interesting sci-fi, mystery, horror story.

The overall atmosphere is helped by the genuinely interesting premise. I am not going to directly address any specific plot points to avoid spoilers, but I think it has some good ideas. The movie’s mystery is interesting enough that you want to see what happens to Gemma and Tom. The movie has a good framework to tell an interesting sci-fi mystery with some light elements of horror. The ending could have been better, but it is still satisfying. There are enough interesting twists to keep you interested throughout the story. Vivarium has some issues, but there are enough good things about the story which make the movie worth watching for people who think the premise is interesting.

I also would give the actors credit as I think they do a good job. Imogen Poots and Jesse Eisenberg do well in the main roles as a couple stuck in a freaky neighborhood that they can’t escape. I think Senan Jennings also deserves credit as the young boy they have to take care of as he does a good job making the boy seem mysterious and creepy at the same time.

Vivarium had all of the makings of a movie that I would really enjoy as I like movies that are weird and try to do something original. Unfortunately the movie is plagued by the fact that it is too long. At only an hour and 38 minutes long you wouldn’t think the movie would be too long and yet it is. The problem with the length is that not a whole lot happens during the movie’s runtime. You could probably cut at least a half hour out of the movie and it wouldn’t drastically impact the film. The movie should have either been quite a bit shorter or they should have expanded on the story. I personally would have preferred the later as the movie has a good premise. I would have liked to see the movie add more to the story as the plot feels kind of thin looking back at it. I think more could have been done with the premise which would have lead to a better movie. As it stands Vivarium kind of drags at times.

While watching Vivarium I kept thinking that the movie really reminded me of shows like Black Mirror and The Twilight Zone. It honestly felt like the premise for the movie was created as an episode for one of these type of shows and then they decided to make it into a full movie. In the process though they forgot to expand on the premise to make it long enough to fill out an entire movie. I am guessing this is not the actual case, but Vivarium would fit perfectly as an episode of The Twilight Zone or Black Mirror. It actually would have worked better as an episode of either show as the plot would have fit better into a 40-50 minute episode rather than a 90+ minute movie. Fans of these type of TV shows will probably enjoy Vivarium, but they may find the movie to be a little too long.

Ultimately Vivarium is a solid film even if I think it could have been better. I thought the premise was really interesting as it had a lot of potential. The style and atmosphere are quite good as they create a world that you want to explore. I thought the acting was pretty good as well. The main problem with Vivarium is that it just feels too long. It honestly feels like the movie took the script from an episode of Black Mirror or The Twilight Zone and turned it into a 98 minute long movie. Unfortunately they never adapted the plot to accommodate the extra length. This leads to a movie that drags at times. The movie should have either been made shorter or the plot should have been developed further.

Honestly Vivarium is not a bad movie. I enjoyed watching it, but I was a little disappointed that it didn’t live up to its potential. If the premise doesn’t really intrigue you I don’t see it being for you. If the premise sounds interesting though and you like shows like Black Mirror or The Twilight Zone I think you will get some enjoyment out of Vivarium and should consider checking it out.

Vivarium will be released on demand and digital on March 27th, 2020.