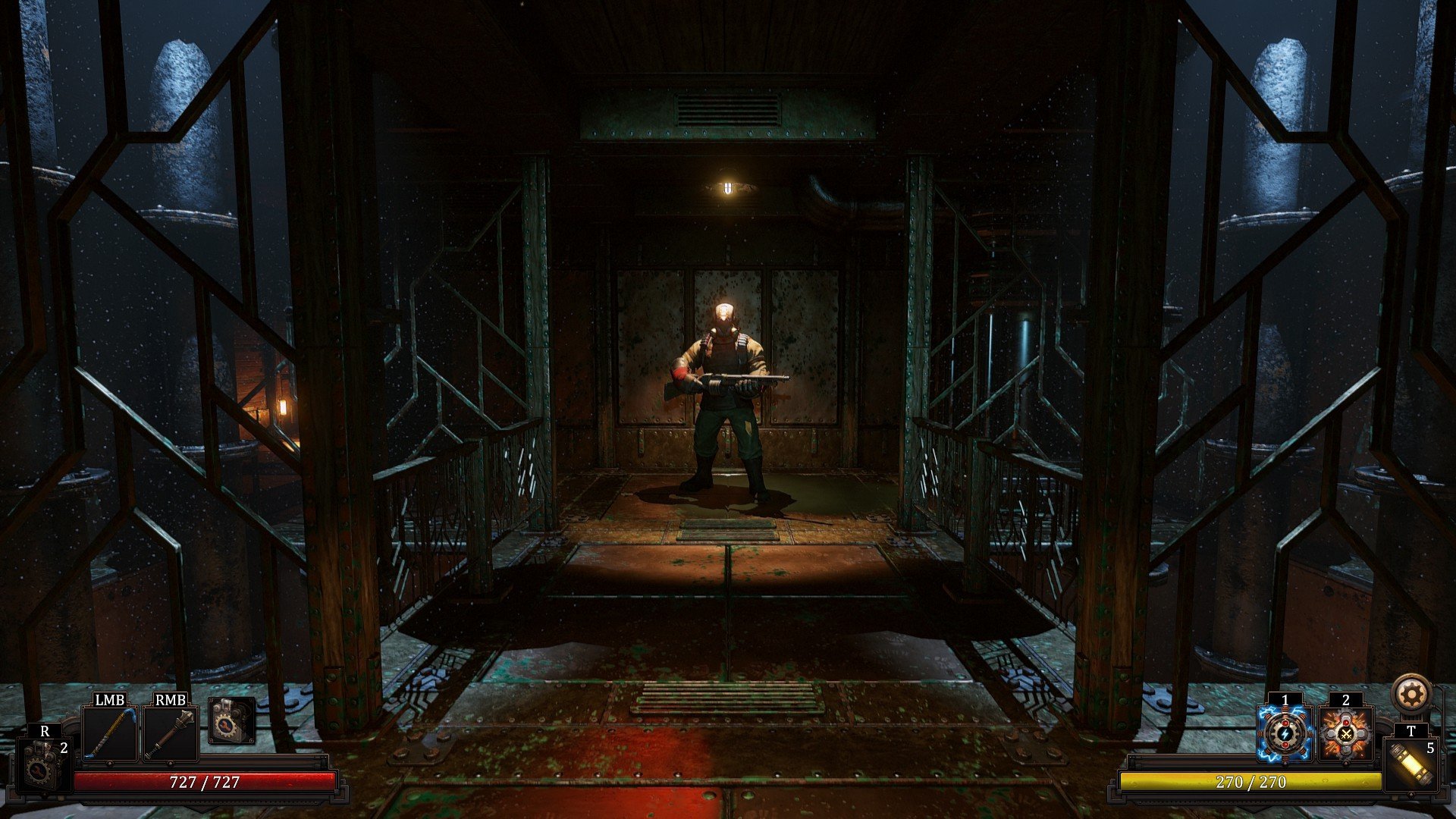 Originally released back in September of 2017, Vaporum was pretty popular on PC. Combining old school dungeon crawling mechanics with a modern steampunk theme, Vaporum looked like a really interesting game. I wasn’t able to play Vaporum when it first came out but with the game coming to consoles (April 9th-PS4 North America, April 10th-PS4 EU and Xbox One, April 11th – Nintendo Switch) I decided to finally check it out. I can’t say that I was much of a fan of the dungeon crawler genre as I never really played them but I thought the theme looked really interesting. I am a huge fan of the Bioshock series and Vaporum reminded me a lot of it. Vaporum does a really good job bringing an older genre into the modern age by combining it with entertaining mechanics and an engaging story.

In Vaporum you wake up in the middle of the ocean without any of your memories. Suddenly a mechanical tower rises up out of the ocean. While you don’t have any memories of the tower it seems oddly familiar so you decide to enter it. As you explore the tower you find that it has been abandoned for the most part. The tower was used for experiments on an odd substance found underneath the ocean. Will you be able to figure out what happened in the tower and eventually escape?

I would say that the first thing that attracted me to Vaporum was the story/theme. As I mentioned earlier the game gave me a lot of Bioshock vibes. The two games’ story/theme are not exactly the same but you can see where the game got inspiration from Bioshock. After all both games feature a city/research facility that was built underwater and a strange substance with magical properties is discovered. As the residents began studying the substance things went wrong leading to a mostly abandoned facility.

Vaporum has a lot in common with Bioshock with regards to the story and theme. It has its own unique story ideas though. A lot of the story comes through various letters and audio logs you find around the tower. The story starts a little slow as most of the early game is used to setup the game’s atmosphere, but it picks up pretty quickly. I haven’t finished the game yet but the story is engaging enough that I want to see what happens next.

While Vaporum and Bioshock share a lot in common when it comes to story and atmosphere, the similarities between the two games basically end there. Bioshock is a first person shooter/action game while Vaporum is a dungeon crawler. The difference between the two game’s gameplay is most evident in the fact that Vaporum’s entire gameplay is based around a grid system. You move from square to square and have to turn to see the surrounding area. The combat is even based around the grid system as you and all of the enemies are on different squares in the world. You and the enemies move around the grid to position yourselves in order to attack each other.

This makes the combat pretty unique especially compared to most of the games released today. With the game being based on a grid you would think that the game is turn based. Unless you use the special mode where time only passes when you perform an action, the combat is still in real-time. You just have to move and attack within the grid format. The grid actually adds quite a bit of strategy to the combat. Vaporum is not the type of game where you can just run up to an enemy and start pounding on them. All of the attacks in the game have a cooldown period so you can’t just keep hitting the attack buttons. If you try to do this you will fail especially when you fight two or more enemies at a time.

Instead the combat in Vaporum is based around positioning yourself in relation to the enemies. For the melee weapons you need to be right next to an enemy in order to attack them. There is also ranged combat which allows you shoot from a distance, but you only have access to a limited amount of bullets. Sidestepping enemies and distancing yourself from them when they attack is key to doing well in combat. In some ways the combat kind of feels like a type of dance as you have to react to what the enemy does. This requires you to always be aware of your surroundings. The worst thing that can happen to you is to be trapped by an enemy. If you get trapped all you can do is to take turns hitting one another hoping that you will outlast your opponent. Unless you have played other games with similar combat, it takes some time to adjust to the mechanics.

Once you start to get used to the combat it can be pretty satisfying. I will say the combat can be pretty difficult at times though. You need to be smart in how you approach fights as you can easily lose if you aren’t prepared. This is especially true when you are fighting multiple enemies at the same time. You will need to be cautious with your repair kits (health potions) as the game gives you enough, but not enough that you can waste them. One thing I would highly recommend is to use the mechanic where you can slow down time especially when you are fighting multiple enemies at the same time. These fights can be quite difficult so having time to analyze your options can only help. Nevertheless unless you are great at the combat, prepare to lose quite a few hit points in these multi-enemy fights.

I think one of the things that Vaporum does best is that it figures out how to bring an older video game genre to the modern day. The grid based dungeon crawler is one of the older video game genres. Vaporum stays true to the origins of the genre while making the game appeal to more modern audiences. Vaporum does a really good job pleasing both audiences. The grid based exploration and combat is definitely an older video game mechanic but Vaporum modernizes it by having everything still play in real-time with the option of pausing to analyze your options. Older games from the genre didn’t include a mini-map which forced players to make their own maps. Vaporum gives players an option to see the mini-map so you don’t have to make your own map. The game gives you plenty of options so players can decide whether they want a classic experience of if they want to implement the modern day quality of life improvements.

So for this review I played the Playstation 4 version of Vaporum. Having never played the PC version I can’t directly compare them, but the PS4 port works quite well. Occasionally the game slows down temporarily, but the game runs well for the most part on consoles. The controls also work well for the most part. Some of the button combinations are a little strange at first, but they work well for the game. The only significant complaint I have with the controls is the fact that sometimes turning is more of a hassle than it needed to be. You turn your character with one of the analog sticks. This works well for the most part but it can be a little sensitive at times. Sometimes your character will end up turning several times when you only intended for the character to turn once. This is usually a minor inconvenience but it can sometimes impact the game quite a bit if it happens in the middle of combat.

As far as length Vaporum is a long enough experience that it should satisfy most players. I would say that I am about halfway through the game and have played it for around six hours. The game has a total of twelve levels and each level takes around an hour to complete. Based on the PC version most players seem to be able to complete the game in around 13-15 hours. That is pretty good for an indie game. The game also includes quite a few secrets to find. Some of these are easy to find while others are really difficult. If you want to find all of the secrets it could add a decent amount of time to the game. I am not sure how much replay value the game has though as the story seems pretty linear. You could choose a different suit at the beginning of the game which will emphasize different parts of combat, but each time you play the game things should be pretty much the same.

Vaporum is an interesting game. It takes an older video game genre, the dungeon crawler, and updates it with modern day mechanics. Basically the entire game takes place on a grid system where you move from space to space. This doesn’t just impact the exploration as it has a huge impact on the combat. The combat relies a lot on manipulating your position in relation to enemies in order to deal damage and avoid enemy attacks. The combat is really interesting and can be quite challenging at times. The puzzles also utilize the grid system which leads to puzzles that are pretty interesting. Vaporum does a good job blending old-school mechanics with modern mechanics while allowing players to choose which modern day improvements they would like to use. This is combined with an interesting theme and story that reminds me a lot of Bioshock. There are a few issues with the controls and the combat can be pretty difficult at times. There is also the fact that the gameplay is not going to appeal to everyone. Vaporum is a good game though that I enjoyed playing.

If the grid based exploration and combat don’t really appeal to you, I don’t think Vaporum will be for you. People who like the steampunk/Bioshock setting and think the grid based gameplay sounds interesting should enjoy Vaporum. I would recommend that these people consider picking it up.