Released in 2009 (not to be confused with the game with the exact same name that was released in 2015), Unusual Suspects was a game that I didn’t really know what to think of when I first saw it. I generally like the idea of deduction games so when I saw a deduction game that had both card and dice mechanics I was intrigued. The problem is that Unusual Suspects doesn’t have particularly high ratings and was a game that failed to ever really catch on. In the end Unusual Suspects is a solid but unspectacular game that has some interesting mechanics but fails to do differentiate itself due to its high reliance on luck and lack of player control.

How to Play Unusual Suspects

The objective of Unusual Suspects is to have all of the cards in your hand match the dice in the evidence locker. Players also cannot have any of their cards or any of the dice match their secret identity. 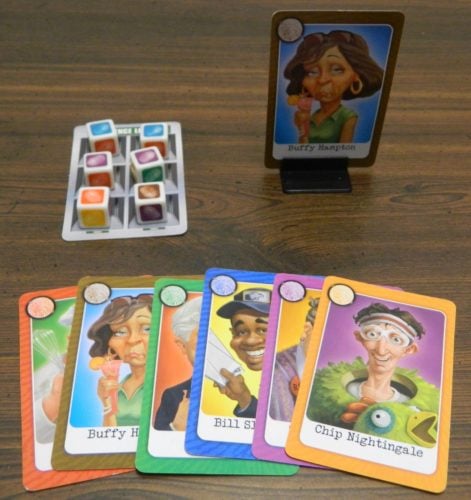 This player currently has cards matching four of the dice in the evidence locker. They don’t have a card to match one of the blue and purple dice. In order to win the round the player will also have to change the brown die and get rid of the brown card in their hand as Buffy Hampton (brown) is their secret identity.

On a player’s turn they can choose to take one of two actions:

When drawing a card the player can either draw the top card from the discard or draw pile. The player then has to discard one of their cards to the discard pile. 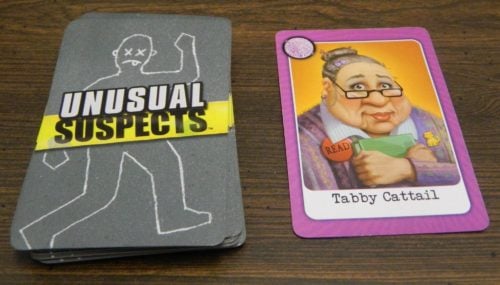 If the current player wants to draw a card they can either take the purple card or the top card from the draw pile.

When re-rolling a die the player can choose which die they want to re-roll. 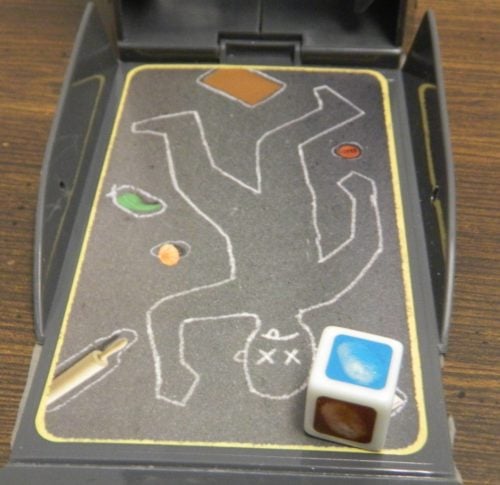 This player chose to roll one of the dice on their turn. The die changed to blue.

A player will immediately win a round (even if it is not their turn) when two conditions are met: 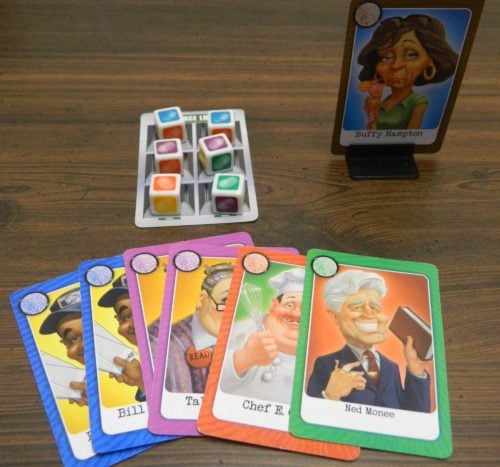 This player has won the round because their cards match the dice and neither the cards nor the dice contain their secret identity.

If none of the players have won three rounds, another round is played.

My Thoughts on Unusual Suspects

So I want to begin by saying that it is surprisingly difficult to classify what type of game Unusual Suspects is. The game utilizes cards and dice while also using a deduction theme. Before looking at the game’s rules I honestly thought it was going to be a deduction game that somehow utilized both dice and cards. Unfortunately outside of the theme there is no deduction in Unusual Suspects. You are not putting together clues in order to solve a case. Instead the game is a weird combination of a dice rolling game mixed with a card/set collecting game where you are trying to match the cards in your hand to the symbols on the dice.

At first I found the combination of a dice and card game to be pretty interesting. The idea of trying to match the cards in your hand to the dice is an interesting idea that I really haven’t seen in many (if any) games that I have played before. I actually thought it was interesting that the game gives you the opportunity to either change one of the dice, to try and get them to match your cards, or change your cards to try and match the dice. Unusual Suspects is never going to be confused for a strategic game but there is a little strategy in choosing which way you want to approach your turn. Generally I would say drawing a card is safer but not always as helpful. Rolling one of the dice seems to make it easier to win a round but it also adds quite a bit of risk..

Rolling a die adds risk to your turn for two reasons. First Unusual Suspects is a game that a player can win at any time even if it is not their turn. You could choose to roll one of the dice and end up winning the game for one of the other players. The other reason rolling the dice adds risk is that you might end up rolling your secret identity which means that you will be unable to win until you get rid of that symbol. At first I thought the secret identities were an unnecessary mechanic but I actually ended up liking them because they add a decent amount of strategy to the game. In order to win the game you have to get rid of all dice and cards that match your secret identity but you have to do it in a way that the other players won’t notice or they can mess with you.

Unusual Suspects has a little strategy but ultimately mostly relies on luck. There are some decisions that can help or hurt your chances but you aren’t going to win the game without luck being on your side. This is due to the fact that you have two choices on each turn and both mostly rely on luck. If you choose to roll the dice you need to roll the right symbols. If you take a card you need it to be a card that you actually need. Add in that the other players are doing the same things on their turns and it is hard to win the game if luck is not on your side.

While the reliance on luck makes Unusual Suspects a simple game, it also makes the game pretty accessible. The rules are really simple where you can teach them to a new player within a couple minutes. The game has a recommended age of 8+ but I think children a little younger shouldn’t have any troubles as there is nothing complicated about the game. Basically Unusual Suspects is the type of game that will work in a situation where you want a game that you don’t have to put too much thought into or you have people that don’t play a lot of board games.

I think the biggest problem that I had with Unusual Suspects was the fact that the length of rounds can vary significantly. Unusual Suspects is the type of game that would have worked well as a quick filler type game if each round would take five minutes or less. Occasionally you will have some quick rounds where a player wins within five minutes. Based on my experience though this occurs maybe half of the time. Theoretically a round of Unusual Suspects could never end. You will regularly play rounds that take ten or more minutes. Until a player gets lucky and has their hand match the dice, the cards and dice will just keep changing until someone ultimately wins. Unless several players are working towards the same goal, the players will end up working against one another making it harder for any player to win the round.

This problem is accentuated by the fact that unless you are only playing with two players, you have little control over your fate in the game. All too often in the game you will be only one dice/card away from winning and then the other players take their turns. If the other players choose to roll dice  they could change them to colors you don’t have in your hand. You could go from being one dice/card away to being three or four dice/cards away before you even get another turn. What little strategy there is to Unusual Suspects goes out the window as it doesn’t really matter what you do if the other players have goals that don’t align with yours. You are basically left hoping you luck into winning the round.

On the component front there are some things I like and others that I don’t really care for. On the positive front I actually really liked the game’s box. While its odd shape makes it harder to store, I think it was actually quite creative how the designers turned the box into a small dice tower. While it is just as easy to just roll the dice normally, there is something satisfying about using a dice tower to roll dice. On the negative side I can’t say that I am a big fan of the dice or cards. The card’s artwork is actually pretty good but the cardstock is pretty thin. The dice are pretty typical but the faces are printed on instead of engraved so once the paint fades off there is no way to tell what color was on each side. I also found it kind of odd that the colors on the dice and cards don’t really match up. For example on the dice one of the colors look yellow but then when you look at the cards it is more orange than yellow.

Should You Buy Unusual Suspects?

At the end of the day Unusual Suspects is the very definition of solid but unspectacular. Unusual Suspects is an interesting combination of a dice and card game where you try to match the cards in your hand to the dice that were rolled. The game is really simple where I can’t see it taking more than a couple minutes to explain how to play the game to new players. The mechanics are solid as it is kind of fun trying to get your hand to match the dice. There are a few light strategic decisions and some risk/reward but the game ultimately relies on a lot of luck. The biggest problem that I had with the game is the lack of control that each player has in the game. You could be one dice/card away from winning and the next time it is your turn you could be three or more cards/dice away. This leads to rounds taking far too long which makes the game drag at times. Combined with the average components, Unusual Suspects is a game with some good ideas that ultimately don’t always work.

Whether you should purchase Unusual Suspects comes down to a couple things. First if the game’s premise doesn’t interest you at all, I don’t see you enjoying the game very much. If you aren’t really into light strategy games that rely on a lot of luck, Unusual Suspects also probably won’t be for you. Finally there is the price. Unusual Suspects is a decent game but there are far better games so I would only consider picking it up if you can get a good deal on it. Basically if Unusual Suspects sounds interesting to you and you can find it for cheap, it may be worth picking up.

If you would like to purchase Unusual Suspects you can find it online: Amazon

The Omega Virus Board Game Review and Rules
Click here to cancel reply.