The Uncle Wiggily Game is one of those board games that many people remember from their childhood. The game is generally one of the first board games that children play and that has been the case for a very long time. Outside of the public domain dice and card games The Uncle Wiggily Game may be the oldest board game that I have ever reviewed here on Geeky Hobbies. The game was in fact first released all the way back in 1916 making it over 100 years old at this point. While I don’t have the nostalgia for the game like some people do, I remember playing the game a few times when I was really young. Not surprisingly I hadn’t played the game since. While I had little to no expectations for the game I decided to give the game a chance for old time’s sake. The Uncle Wiggily Game may be considered a board game classic that young children will probably love, for everyone else it is a boring mess that you can make a good argument that it shouldn’t even be considered a board game.

How to Play The Uncle Wiggily Game

On a player’s turn they will draw the top card from the rabbit deck and read it out loud. On each card there will be a little rhyme that you are supposed to read out loud. If the card mentions a number the player will move their marker forward the corresponding number of spaces. 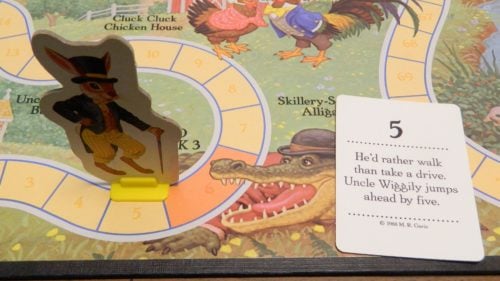 The yellow player drew a five card. They will move their rabbit forward five spaces.

If the card says to draw a red card you will do as it says. You will draw the top red card and follow the directions on the card. 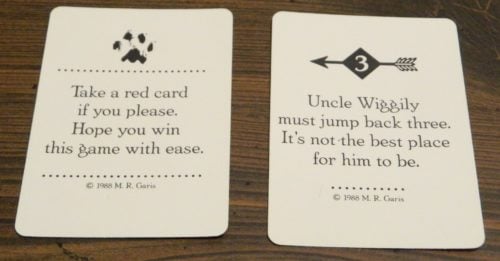 While moving around the board there are a couple special rules:

After you have read your card(s) and moved your playing piece you will place the card(s) face up in their discard pile(s). If either draw deck run out of cards you will shuffle the corresponding discard pile to create the new draw pile.

Play will then pass to the next player clockwise.

In order to win the game you must land on the last space (space 100) by exact count. The first player to do so wins the game. 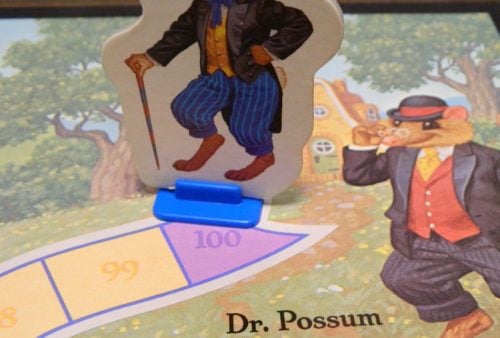 The blue player has reached space 100. Therefore they have won the game.

If you draw a card that would put you past the last space you will leave your piece on its current space. 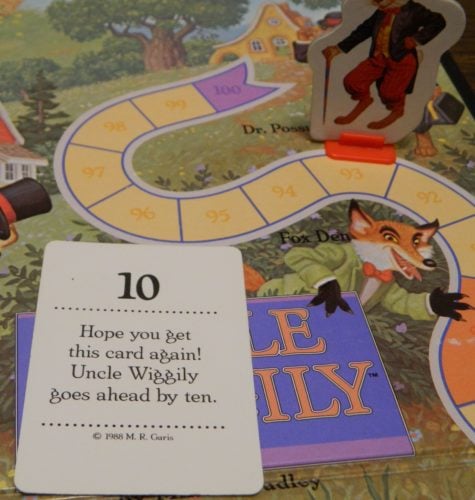 My Thoughts on The Uncle Wiggily Game

With that said on its’ own The Uncle Wiggily Game is objectively a terrible game. I honestly don’t know if I would even consider it to be a game. Basically the entire game revolves around drawing a card, reading the rhyme, and moving your playing piece the corresponding number of spaces. That is literally all there is to the game. The Uncle Wiggily Game is one of a few games that literally relies on no skill or strategy. As a matter of fact unless you miscount or cheat your fate is determined solely by how the cards are shuffled. You could literally have someone else take all of your turns for you and just come back when the game is over to see if you “won”. It honestly is really hard to even call The Uncle Wiggily Game a game. You literally do nothing in the game except read cards and perform the corresponding action. That is all there is to the game.

This leads to a really boring game. While it should be obvious by the fact that the game has a recommended age of 4-7 I would not play the game unless you have children/grandchildren/etc in that age range. The only way I could see an adult having any fun with the game is through the enjoyment of the children they are playing the game with. There is also the chance that people who fondly remember the game from their childhood could get some enjoyment out of the nostalgia. I remember the game from my childhood and yet I can objectively say that The Uncle Wiggily Game is not a good game except for young children.

As an adult I actually think the most interesting thing about the game is the game’s backstory. Some people may not be aware, but The Uncle Wiggily Game is arguably one of the first pieces of spinoff merchandise. The game is actually based on a set of stories featuring Uncle Wiggily Longears. Uncle Wiggily Longears was a series of stories created by Howard R. Garis which was printed six days a week in the local newspaper from 1910 to 1962. The popularity of the series lead to a series of books. It eventually got the attention of Milton Bradley which made the first version of the game back in 1916. Throughout the years the board and cards have been redesigned, but the main gameplay has remained the same. The most interesting thing I found in my research on the game is that The Uncle Wiggily Game actually received a sequel. Released in 1920 Uncle Wiggily’s New Airplane Game was basically the same game with a new theme and redesigned board. This sequel clearly didn’t sell well as it seemed to only ever receive one version and was mostly forgotten to time.

While The Uncle Wiggily Game is a terrible game for adults, I think young children could really enjoy it. This is because the game was designed to be really easy. Any child who has some basic math and reading skills (or has a parent that will read the cards to them) can easily play the game. The game has some educational value as it is one of the first games that children can play and it reinforces basic reading and math skills. I can see the overall theme working really well for young children as well. This somewhat depends on the version of the game that you have, but the artwork is cute/charming and the animal theme will likely really appeal to young children.

Another thing that shows the discrepancy between children and adults is the fact that all of the cards in the game are written in rhyme. I think children will love the rhymes as they are simple and catchy. As an adult though they are kind of cringy. In some ways the rhymes are kind of clever, but at the same time they are corny. The biggest problem with the rhymes is that they start to drive you nuts after a while. This might not be the case for every version, but at least with my version (1988) the cards are really repetitive. Each number in the game has I believe only one rhyme for it which means that you will keep saying the same rhymes over and over again. Young children may enjoy this, but it becomes pretty repetitive after a while.

Should You Buy The Uncle Wiggily Game?

The Uncle Wiggily Game is one of those games that has a very specific audience. Objectively the game is not very good as you can make a good argument that it shouldn’t even be considered a game. You basically just draw cards and move the corresponding number of spaces. The game has literally no skill or strategy as the winner is determined by how the cards are shuffled. This leads to a really boring game for adults and older children as there are no decisions to make in the entire game. Unless you have a lot of nostalgia for The Uncle Wiggily Game or have young children to play the game with there is no reason to play it. Having said that I think young children could really enjoy the game. The game is really easy to play, the theme should appeal to younger children, and there is some educational value.

As young children, my brother and I enjoyed playing Uncle Wiggly. We had the 1955 version which had very appealing art work. We also learned how to count to 100 before learning that in school