How to Play Ultimate Outburst 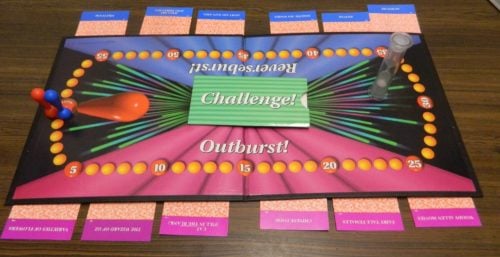 The scorekeeper reads the answers on the card to familiarize themself with them. The scorekeeper then reads the category to the other team and then turns over the timer. The current team then yells out as many answers as they can that match the current category. When the team comes up with one of the answers from the card, the scorekeeper says “yes” and slides the button to indicate that the answer was given. 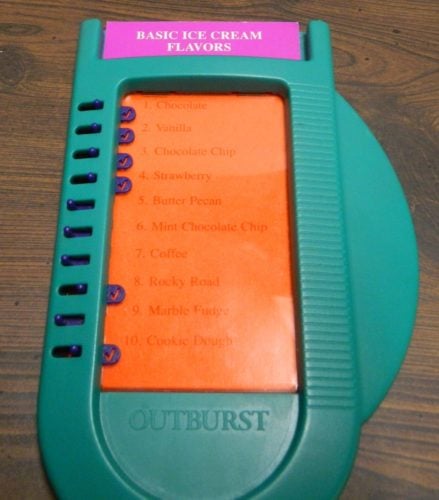 For this round the team had to guess basic ice cream flavors. They were able to get six of the answers so they will move their piece forward six spaces.

The other team then takes their turn. Both teams switch off taking turns until all six cards have been played. The game then moves onto round two.

Just like in the first round the current team will choose a blue card and it is put in the holder with the side facing the table being visible in the holder. One player from the other team will be the scorekeeper. In this round the team is trying to guess the category (word at the top of the card) that connects all of the words together. The scorekeeper turns over the timer and reads the first clue on the card.

Players from the team can make as many guesses as they want. When the players want another clue they ask the scorekeeper for the next clue. The scorekeeper then reads off the next clue on the card. Player can also ask the reader to repeat all revealed answers at any time. 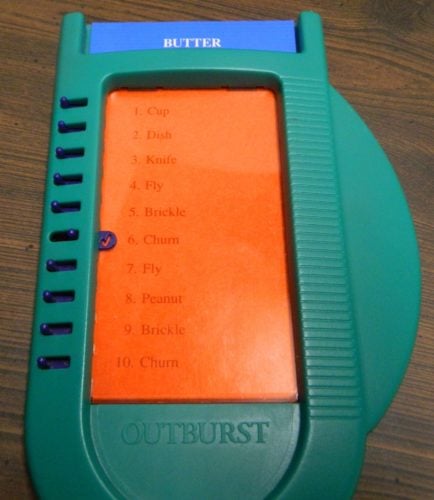 This team took six clues in order to guess the card’s category. The team will get to move their piece forward four spaces.

The round continues until all six ReverseBurst cards have been played

In round three the players will use the cards from the envelope. The team that is behind will reveal the category for the first card in the envelope. The team will then choose how many of the ten answers they think they can get. The other team can then either raise the bid or pass the card to the other team. This bidding process continues back and forth until one team passes.

The team that bid higher will then get to play the card. The round is played the same as round one where players try to guess as many of the words on the card as they can. 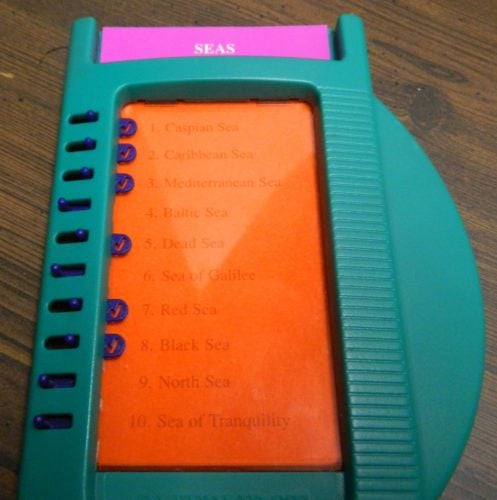 This round continues with the next card being bid on with the team that is behind making the first bid. This continues until one of the teams reaches the finish space. If all of the cards from the envelope are used and neither team has reached the finish space, additional Outburst cards are drawn from the box. 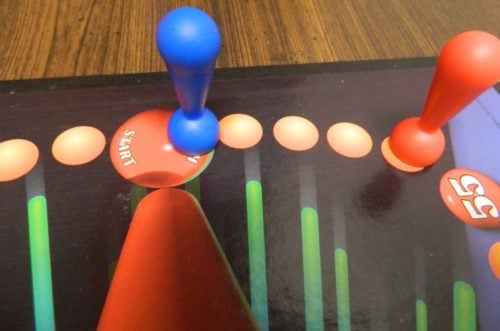 The blue team has reached the finish space so they have won the game.

My Thoughts on Ultimate Outburst

I would say the most unique element of Ultimate Outburst is the second round of the game ReverseBurst. The name of the round does a great job explaining itself as it is basically the reverse of the original Outburst. Instead of getting a category and then trying to guess words from that category, you do the opposite. Players are given clues that relate to the overall category and players have to figure out the category before time runs out.

While not quite as good as the main gameplay I think ReverseBurst is a good change of pace. ReverseBurst actually has quite a bit more strategy to it than the normal game in my opinion. In the first round you basically have to just try and shout out as many answers as possible hoping that you come up with the items listed on the card. While you are also yelling out answers in ReverseBurst, there is actually some strategy in how you ask for clues. You obviously want to use as few clues as possible to maximize your points for the round. Teams can’t run out of time though and score no points. You can’t waste too much time on any given clue but you also don’t want to go through the clues too quickly that you end up losing points.

Just like the second round I think the third round is a nice change of pace. The bidding mechanic is interesting as players are trying to figure out how many answers they think both teams will be able to get. A team wants a low bid if they are controlling the round and they want to high bid if the other team controls the round. This could lead to some bluffing if one team is much more comfortable with the category than the other team. The third round is interesting as it can either lead to a blowout victory or it can lead to a team catching up. If a team bids too conservatively or aggressively they open the other team up to scoring a lot of points.

While I liked the third round I will say that it does seem to run a little too long. If the players score a lot of points in the first two rounds the last round won’t be too long. I can see a lot of games ending with an extended third round though as teams try to get enough points to reach the finish line. In one game we had to play around ten cards in the third round before either team reached the finish. At that point the round was kind of dragging.

As far as complaints I would say Ultimate Outlast basically shares the same problems as the original game. One of the biggest complaints I had with the original game was that a lot of the cards were kind of outdated. With Ultimate Outburst being released in 1999 I was hoping this was going to be a little better as the cards were more recent. To a degree the cards are better than the older versions of Outburst as less of the cards are outdated. At the same time though you will still find cards that are outdated. That is somewhat expected from a game that is 18 years old. When you encounter one of these cards you are probably better off just skipping it and using a different card. I just wish the Outburst series could have done a better job coming up with more categories that weren’t so time sensitive.

Should You Buy Ultimate Outburst?

If I had to compare Outburst and Ultimate Outburst I would say that I liked both games about the same. The first round which is basically the original game is probably the best round in the game. The second and third rounds do a good job adding some variety to the game. They don’t drastically change the gameplay but change it enough that it doesn’t feel like you are doing the same things over and over again. The two games are so similar though that they both have the same problem with outdated cards. Basically Ultimate Outburst might be slightly better than the original Outburst due to the variety.

If you would like to purchase Ultimate Outburst you can find it online: Amazon

Probably your best option would be to look for a replacement card reader on eBay or a similar site.