What Is Ultimate Chicken Horse?

Ultimate Chicken Horse is a competitive party platformer game that lets you build the level as you play and mess with your friends. A game of Ultimate Chicken Horse is played over several rounds. At first, you are given a bare-bones level (sometimes just a platform to stand on, a huge gap, and another platform to get to to complete the level) but each player is also given the chance to select one object (a trap, hazard, set of stairs, spring, or one of many other possibilities) and place it where they’d like in the level. There are two different modes of play which affect the object choices that will be available to you and your opponents. Creative mode lets you choose from the entire catalog of object options while party mode gives all players the choice of four objects and the first player to select each object gets to determine where to place it (the rest of the players will have to pick from the other, usually lesser options). 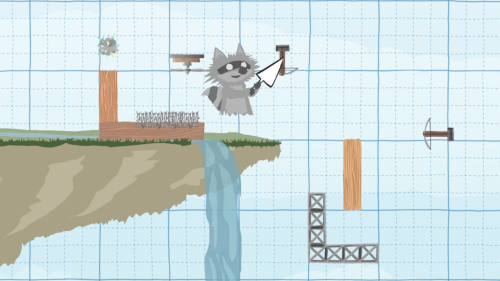 Once all players have selected their objects and placed them into the level, everybody tries to complete the level without dying. If all players successfully make it to the finish line, no points are awarded and the round is considered a draw. Zero points are also given out if nobody successfully makes it to the end. However, if a player successfully completes the level and at least one other player fails, they will receive points for finishing. Points are also given out to players who put out the objects that knock out other players (and stop them from finishing the level) and as a way for “underdogs” to catch up.

Once all the points are given out (if any), a new round begins with each player selecting and placing another object into the level (all objects from previous rounds are kept in the level unless they are destroyed by a bomb object). They then attempt to complete the level again (with the new obstacles included) and points are given out. Play continues in the exact same way until either one player has scored enough points for the win or the maximum amount of rounds have been played (in which case the player with the most points wins).

Ultimate Chicken Horse includes nine different levels (some of which you have to unlock to play though). The game does not offer single-player (since it really wouldn’t work as a single-player game) but does have local and online multiplayer options (online had a bug which made it unplayable at launch but that has since been fixed). Up to four players can play locally or online. 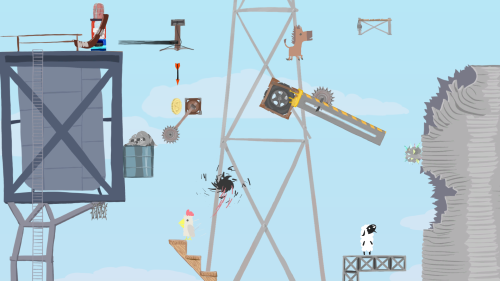 As a gamer who likes platformers and multiplayer party games, Ultimate Chicken Horse was pretty much made for me. I loved the concept from the second I saw it on Steam’s list of upcoming games and I knew I had to give it a try. After playing the game for a few hours, I can already tell that Ultimate Chicken Horse is a game that I am going to come back to time and time again to spend a fun hour or two. It isn’t a game you are going to play for five hours straight but in small doses, it is a very fun time.

There aren’t very many negatives with Ultimate Chicken Horse but let’s just get the few of them out of the way right away. First of all, while this isn’t really that big of a negative since it probably wouldn’t be very fun anyways, the lack of single-player still has to be on the list. Most likely the computer player would either be an idiot or an unbeatable force (it has to be really hard to program a computer player in a game like this) but players who have nobody to play with locally and hate playing online are out of luck in this game (I know that is a small minority though) and should not purchase it.

Other than that, the only negatives for Ultimate Chicken Horse are one small scoring decision I don’t agree with (I feel that underdog gives out too many points to the trailing player), one addition I would make to scoring (adding either a slight reward for finishing much faster than your opponents or a timer that starts once one player has finished and all their opponents must finish the course before time expires or they will fail the round), and the wish for a few more levels (though nine different levels is definitely a solid amount).

Unless you have nobody to play with locally and hate playing online, those negatives are not severe at all and everything else about Ultimate Chicken Horse is great. The presentation is awesome. The game has a very cute cartoony, almost hand-drawn like art style that I love. The characters are adorable and I can’t even decide which one is the cutest. The sound effects are cute as well and the soundtrack is pretty darn catchy. Everything about the presentation will definitely appeal to both children and children at heart (like me).

Also, for a game that lets you edit a level on the fly, Ultimate Chicken Horse is surprisingly easy to use. All you have to do is select an object to use, move the object to an acceptable location, and place it. Since you are building the level yourself, the difficulty of the game itself is very flexible. Kids can construct relatively easy levels that they can complete while masochists can make levels that can compete with Super Meat Boy on the platforming difficulty scale. If you really like to mess with your friends, you can even technically sometimes make a level that is impossible to complete just so your friends can’t get those precious points and steal your lead. The messing with your friends mechanics are very fun though if you are playing with an overly competitive person, they can relatively easily mess with everyone else so that nobody can overtake their lead (they can use a bomb to destroy helpful objects, set up nearly impossible obstacles and traps, etc.). A lot of the fun of the game is messing with your friends and making the most ridiculously difficult level that you can.

Ultimate Chicken Horse is priced at $14.99 which I feel is a very fair price, especially if you have friends to play with locally (online is fine but the game is funner if you play it in person). The game is more of a play for an hour or two every few weeks type of game but you will probably easily get 20-30 hours out of it by the time you get sick of it (and even then a few weeks or months down the road you will probably be itching to play it again).

Ultimate Chicken Horse is a very fun party platformer game to mess with your friends. While it doesn’t quite have the same amount of depth (though it does offer a lot of different level elements to play with), it is kind of a simplified Mario Maker for PC where you build the level on the fly. If that sounds like fun to you and you have a few friends to play with, I highly recommend Ultimate Chicken Horse. It is one of the best multiplayer games I have played in awhile.