Being a fan of puzzle games I am always interested in trying out new puzzle games especially if they are doing something that I haven’t seen done before. When you first look at U-Turn it actually looks like more of a puzzle than game. U-Turn is an interesting two player strategy game though as the players have to play off each others’ blocks in order to trap a dot of their own color.  While it is not going to appeal to everyone, U-Turn is a surprisingly strategic and interesting puzzle game.

How to Play U-Turn

To setup up the game find the block of each color that has no dot on it. These two blocks are connected to one another to form the beginning structure. Each player then takes all of the blocks of their color. The youngest player gets to go first. 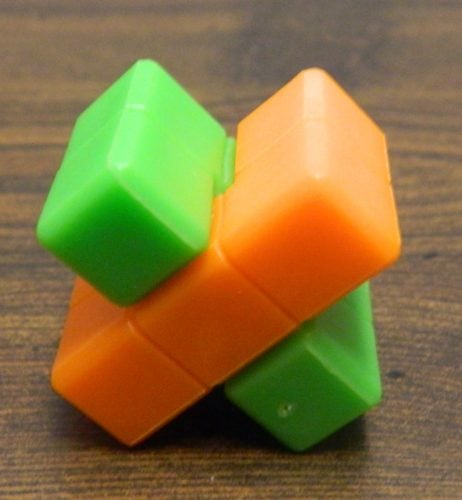 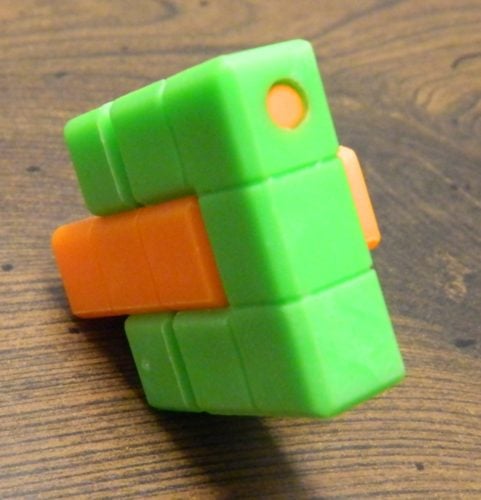 The green player has added a block to the puzzle by connecting it to one of the orange blocks.

After placing the block the player checks all six faces of the puzzle to see if either player has won the game. If there is a continuous chain of one color around a dot of the same color, the corresponding player wins the game. 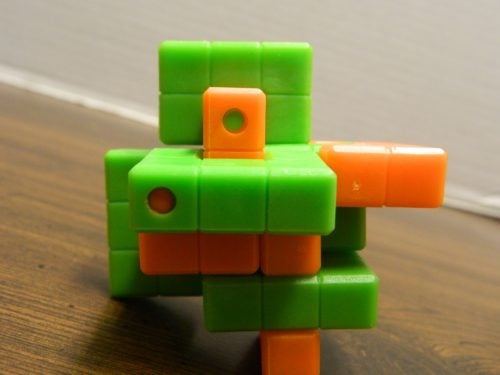 The green player has won the game because they have surrounded a green dot with green blocks. 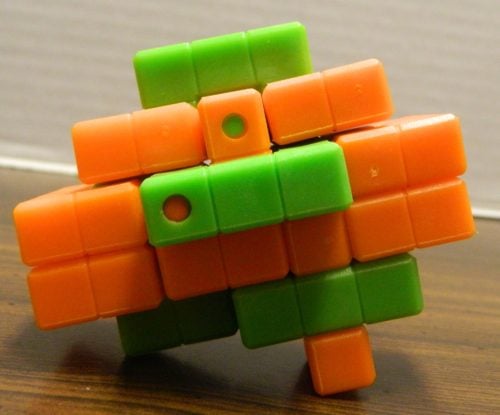 The orange player has won the game because they have surrounded an orange dot with orange blocks.

If all of the blocks are added and neither player has won, players compare how many dots of their color are showing. The player who has fewer of their colored dots showing, wins the game.

My Thoughts on U-Turn

When you first see U-Turn it probably looks like a very simple game. You take a block and connect it to a block of the other color. The other player does the same until one player is able to surround one of their colored dots. At its’ basic level that is all there is to the game. The game’s simple mechanics make U-Turn a game that anyone can play.

While the game might seem simple at first there is actually quite a bit of hidden strategy/depth to the game. U-Turn works perfectly fine as a game where each player can just add blocks without much thought and someone will eventually win. U-Turn can become quite a bit more complicated if you really want to think through your moves. At first each player doesn’t have a lot of potential moves but as the puzzle get larger the potential moves grow exponentially. U-Turn is a game where analysis paralysis could start to creep in if you have two players that always try to maximize their moves.

One thing that I find interesting about U-Turn is that there doesn’t appear to be an obvious winning strategy in the game. There seems to be quite a few different ways to manipulate the puzzle in order to try and create a path that surrounds one of your colored dots. After a couple games though I don’t really see a specific strategy that will work in every game. This might be seen as a positive by some people but could be a negative for other people. U-Turn is a game that takes a couple games to fully appreciate.

The dots become really interesting since they become the tiebreaker if no one is able to win before all of the blocks are used. During the game it is beneficial to have a lot of dots of your color showing since it gives you more opportunities to win the game. The opposite is true at the end of the game as each dot that is showing makes it harder for you to win the game. This actually becomes an interesting mechanic because while you might want to cover up your opponents dots to give them less opportunities to win the game, if you hide too many dots during the game you will have a hard time winning the tiebreaker.

For the most part I thought U-Turn was an interesting and fun little puzzle game. It took a while to grow on me but I appreciate the strategic options in the game. I will say that U-Turn is not going to be for everyone though. While I liked the game, my brother didn’t really care for it. Being an abstract spatial puzzle game, this is one of those type of games that you need to be really good at spatial puzzles in order to do well in the game. If you are not good with spatial puzzles, you are going to struggle with U-Turn and probably won’t care much for it.

As far as component quality I have some mixed feelings. I kind of wish you could keep the outer packaging but you pretty much have to ruin it to open up the game. Instead you pretty much have to keep the game in the included mesh bag. While I would have preferred the outer packaging, the mesh bag does make traveling with the game considerably easier. As far as the blocks themselves, they are solid but not spectacular. While the puzzle is small the blocks connect to each other quite well which creates a sturdy structure. As the puzzle gets larger though it does become a little more unstable to the point where it is sometimes hard to keep it together when you add more blocks onto the structure. This doesn’t ruin the game but you need to be careful with the puzzle the larger it gets.

Should You Buy U-Turn?

U-Turn is an interesting little puzzle game. At first the game seems really easy since you just add blocks to the puzzle hoping to surround a dot of your own color. There is actually a surprising amount of strategy to the game though since you have to think about quite a few things before you place your block. U-Turn is a game that I think takes a couple games to fully appreciate. U-Turn is not going to be for everyone though since it is an abstract spatial puzzle game. If you don’t really care for abstract spatial puzzles you are not going to like U-Turn.

If you like the game’s premise and generally like abstract spatial puzzles I think you will really like U-Turn. If you don’t really like these type of puzzle games though I don’t see U-Turn being the game for you.