Originally created back in 1974 Connect Four is a pretty simple concept for a board game. Players take turns dropping discs into a grid trying to get four in a row before the other player. With the straightforward gameplay Connect Four is considered a solved game where using the right strategy allows the first player to always win the game. Over the years Connect 4 has had a surprising number of spinoff games. One of those games is today’s game U-Build Connect 4. Being the last U-Build game that I hadn’t played yet, I can’t say that I had high expectations for the game based on how well the other games in the line turned out. U-Build Connect 4 has some interesting additions for Connect 4 but unfortunately they just add more luck to the game.

How to Play U-Build Connect 4 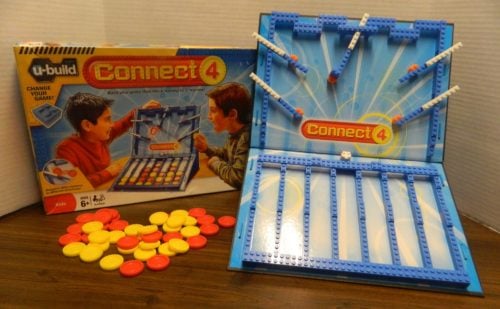 The objective of the game is to get four of your checkers in a row vertically, horizontally, or diagonally.

A player begins their turn by positioning all of the bumpers however they want. 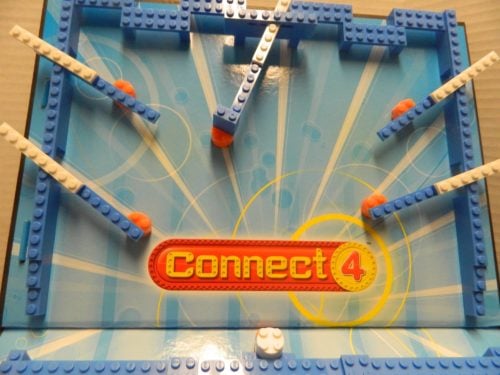 The current player can move these bumpers however they prefer before dropping one of their checkers.

The player then chooses one of the slots on the top of the board. They drop one of their checkers down the slot. Usually a checker will fall into one of the grid spaces on the bottom of the board. If something else happens you may have to take a special action:

When one player gets four checkers in a row vertically, horizontally or diagonally; they win the game. 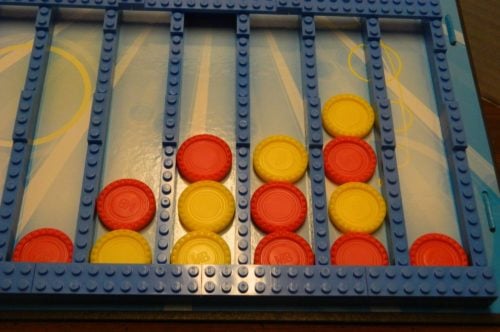 The yellow player has gotten four chips in a row so they have won the game.

These are the variant rules included with the game:

My Thoughts on U-Build Connect 4

The easiest way to describe U-Build Connect 4 would be to say that it is Connect Four combined with mechanics from Plinko/Pachinko. Basically the goal of the game is the same as normal Connect Four. You need to get four of your discs in a row in order to win the game. The difference in U-Build Connect 4 is that you can no longer just drop checkers into whatever column you want. There are bumpers situated around the board which can change the column that the disc will fall into. Before dropping your checker you try to move the bumpers into position to get your disc to fall into your desired column.

Being a fan of Plinko, adding this type of mechanic to Connect 4 was intriguing. The idea of having to setup the bumpers in a way to bounce discs into your desired column seemed like it would be a fun addition to mix things up for Connect 4. After playing the game for a while I think the mechanic is fun and could lead to a good board game. Unfortunately it doesn’t work as well as I was hoping in U-Build Connect 4.

The biggest problem with the mechanic is that it doesn’t add a lot to the game. As a matter of fact if you use the rule where you can move as many bumpers as you want, you only need to use the bumpers to hit two of the spots. Other than the columns one away from the left and right side of the board, you can move the bumpers out of the way and literally drop the checkers into your desired column. Unless you make a rule where you have to use the bumpers, there is no reason not to just drop your disc into the column you want. When you play the game like this it is basically your normal Connect Four unless you have to drop a disc into one of the two columns that require you to use a bumper. If neither player misses an obvious four in a row opportunity, the winner is going to come down to who is able to get one of their discs into one of those two columns at the right time.

Since following the normal rules basically allows you to ignore the spirit of the game, we decided to try out a house rule in order to emphasize the unique mechanics of U-Build Connect 4. We came up with a rule that all discs that are dropped have to bounce off at least one bumper in order to be counted. If a disc didn’t hit any bumper it would be removed from the board. This house rule fixed the first problem with U-Build Connect 4 as players could no longer avoid using the bumpers. The problem is that by forcing players to use the bumpers, it showed that using the bumpers adds a lot of luck to the game.

It is kind of strange playing a Connect Four game that relies on a lot of luck since the original game has next to no luck in it. In the original game the player that is able to outsmart the other player would always win the game. The same is not true in U-Build Connect 4. While you still need a strategy, it is just as important that you are able to judge how the discs are going to bounce off the bumpers. Originally I thought this was going to be a good mechanic as players would have to judge how the discs would hit the bumpers to determine where they would end up. Unfortunately the discs seem to bounce randomly off the bumpers meaning your strategy is not going to help you a lot. You mostly have to rely on luck being on your side.

Like the rest of the U-Build Line I can’t say that I am a big fan of the component quality in U-Build Connect 4. The game utilizes the fake Legos like the rest of the line which are of an inferior quality. The gameboard takes a surprising amount of time to setup. You can probably play the game three or four times in the amount of time that it takes to set it up. Once you setup the board though it stays together pretty well. I would recommend keeping it assembled between plays though as it is not worth the time taking it apart and putting it back together. The biggest problems that I have with the components is that the discs are so random in how they bounce off the bumpers. If the bumpers were a little more consistent the game might have a little strategy. The discs don’t bounce consistently though which leads to a lot of the randomness in the game.

Should You Buy U-Build Connect 4?

At the end of the day U-Build Connect 4 was a good idea that just doesn’t work right. The idea of adding a Plinko/Pachinko mechanic to Connect Four is actually a pretty interesting idea. If you don’t really care about who wins, you can have some fun bouncing your discs off the bumpers. The problem is that in execution the game doesn’t work right. Without any house rules you can just drop discs straight into all but two of the columns. When you add in house rules to force players to use the bumpers it reveals that it is pretty random how the discs bounce off the bumpers. This adds a lot of luck to a game that otherwise relies mostly on strategy. Likely the luckiest player is going to win the game. Add in subpar components and the fact that the gameboard takes too long to setup and U-Build Connect 4 feels like a waste of time.

If you don’t really care for Connect Four or don’t like the bumper idea, U-Build Connect 4 is not going to be for you. If the game’s concept intrigues you though, there are things to like about the game. If you don’t want a completely random experience though you are going to have to come up with some good house rules. Due to these issues I can only recommend U-Build Connect 4 if you can get a good deal on it.

If you would like to purchase U-Build Connect 4 you can find it online: Amazon