While most people are familiar with the 1967 version of Battleship created by Milton Bradley, the game actually has a much more interesting history. Earlier versions of the game date back to the 1930s when the game was mostly played as a paper and pencil game. People would create grids on pieces of paper and the rest of the gameplay was basically the same as the Battleship that everyone is familiar with. The success of the original Battleship lead to a surprising number of spinoff games. One of those spinoff games is U-Build Battleship. U-Build Battleship tries to reinvent Battleship by implementing some long forgotten variant rules but ultimately ends up not differing much from the original game.

How to Play U-Build Battleship 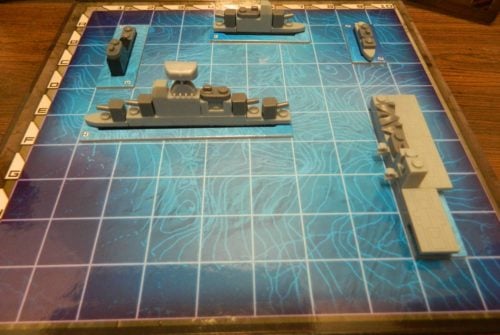 In U-Build Battleship each player will have five ships. Each ship has a different number of weapons and shots needed to sink it. The ships are as follows:

A player begins their turn by choosing which ship they are going to fire with and announcing how many shots they are using. The number of shots that you are allowed depends on how many weapons the ship has remaining. Your opponent will take as many blue pegs as shots you are taking this turn.

The player who is shooting will choose which spaces they want to attack. They will mark the spaces on their target grid with blue pegs. 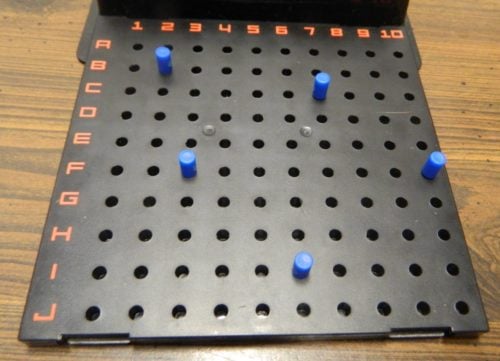 This player has chosen to use their battleship which gives them five shots. They have chosen to attack B2, C7, F3, F10, and I6.

The attacking player then calls out the coordinates of the their chosen shots. The other player marks the location of the shots on their ocean grid using their blue pegs. 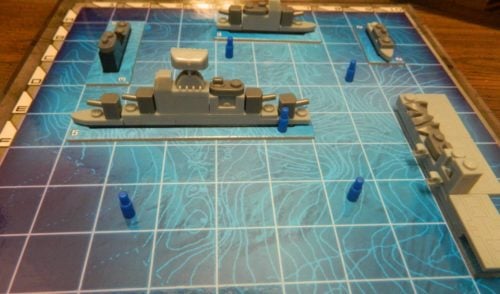 This player has marked the shots on their board. The player ended up having one of their ships shot. 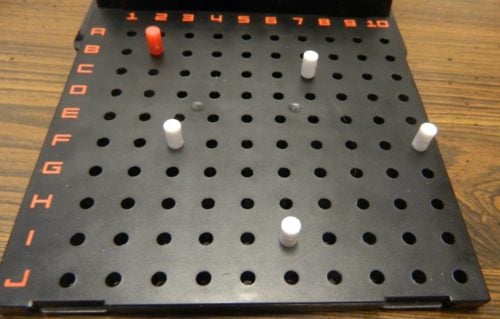 This player has found one ship at B2. The rest of their shots were misses. 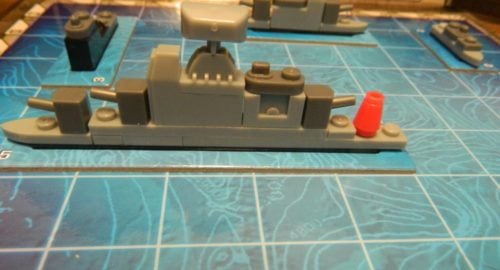 This player’s battleship has lost one of its weapons. This ship will only be able to shoot four times from now on.

Once all of the shots have been resolved, the other player takes their turn shooting.

When one player sinks all of the other player’s ships, they win the game.

Instead of using the ships from the normal game, U-Build Battleship allows players to build their own unique ships. Each player will have to use the same five bases but can customize each ship however they prefer. When customizing a ship the following rules must be followed:

My Thoughts on U-Build Battleship

Outside of the customization option, U-Build Battleship only has one mechanic not found in traditional Battleship. The unique mechanic is that players are able to call out more than one spot on their turn. It turns out that this mechanic is not even as unique as I originally thought since the earliest versions of Battleship actually had a similar mechanic that was printed under the “Salvo” variant rule. Over time this variant rule was removed from the Battleship rulebook for unknown reasons. I am guessing that it either wasn’t popular or the publisher thought it was confusing to some players. This “salvo” rule had a couple different variants including one that plays exactly like U-Build Battleship and one where the number of shots you get is dependent on how many ships you have remaining.

In U-Build Battleship, players are able to choose as many spots to target as there are weapons on one of their ships. Each time a ship is hit it reduces the amount of weapons that ship has access to. While the game presents it as a choice of which ship you want to attack with, I really don’t see it as much of a choice. I honestly see no reason why you wouldn’t use whichever ship has the most weapons still available. I see no benefit to targeting less spaces as each space you target improves you odds of winning the game. By not attacking the maximum number of spaces you are decreasing your chances of winning the game.

When I first read the rules I was intrigued by the idea of being able to target several spots on a turn. I thought it might add a little strategy to the game as you could uncover several spaces on a turn. At the very least it would speed up the game as you could go through all of the spaces quicker. While it is debatable whether it adds any strategy (more on this soon), it is hard to deny that it speeds up the game quite a bit. Being able to cover more of the grid each turn means that it will take you quite a few less turns to find all of the other player’s ships.

As far as strategy I think the mechanic may add a little to the game. Since you can shoot up to five shots on a turn, there is no reason to choose any spaces that are next to one another unless you hit a ship in the area on a previous turn.  Since each ship is at least two spaces long, there is no need to check every space. Checking every other space eliminates the possibility of a ship being in one of the spaces you didn’t check. This allows you to reduce the search grid in half as you only have to check the other spaces if you got a hit on one of the neighboring spaces. Getting multiple shots only adds a little strategy to U-Build Battleship because you could still implement this strategy in the original Battleship, it would just take longer.

The problem with letting players have multiple shots on a turn is that it adds a lot of luck to the game. Basically the first player to hit the other player’s four and five weapon ships are going to have a huge advantage in the game. If one player gets to choose five spots on their turn while another only gets three (or even less), it is going to be hard for the later player to win the game.  If you end up finding one of the other player’s small ships you might be better off waiting to sink the whole ship until you hit the larger ships. Once you weaken the four and five weapon ship you can then proceed to sink all of the other ships you have found.

With how the mechanic seems to give an advantage to the player in front I am kind of curious how the other “salvo” rule would work. The other salvo rule gives players shots equal to the number of ships they have left. The good thing about this variant of the rule is that no longer would a player be disadvantaged due to the other player finding one of their large ships. The problem is that I think it will add the same amount of luck because the player who hits more ships would then have the advantage. This will lead to the same problem of the player in first just increasing their lead over the other player.

While the multiple shots mechanic is flawed, I think it would have been a little better if the game didn’t force you to reveal the identity of ships that are hit. I think a player should only have to reveal which location was a hit. While the other player can figure it out pretty quickly by targeting the neighboring spaces, I don’t see the reasoning behind giving the other player more information than they need. By telling them which ship was hit they can quickly tell which other spaces they have to target. This also allows them to wait to sink the smaller ships as they target the larger ship. Outside of making the game easier/quicker, I see no reason why this rule is in the game. I personally would recommend ignoring it.

Just like with the rest of the U-Build line, U-Build Battleship has some customization options for the game. In this regard I actually think U-Build Battleship does better than the rest of the line. Technically the game only has one rule that is impacted by the customization but I think it has the greatest impact on the actual gameplay. Basically the customization options allow players to place as many weapons as they want on a ship with some limitations. A player can evenly spread out their weapons or they can pack most of them onto one or two ships.

This might not sound like a lot but I think it could actually have a pretty big impact on the game since it adds a huge risk/reward mechanic to the game. Placing most of your weapons on the same ship can be beneficial since it lets you choose more targets every turn. Being able to choose up to ten spaces on a turn could be huge in the game. The catch though is if that ship is sunk you lose all of those weapons for the rest of the game. While you are taking a big risk, I personally think your best option in the game is probably to stuff as many weapons as you can onto one ship. If a player finds that ship you are going to lose but you have better odds of finding their ships before they find yours. I think the best strategy would be to try to stuff as many weapons as possible onto one of the smaller boats.

On the component front I would say U-Build Battleship is better than most of the U-Build series but it has its’ own problems. The game uses the same fake Legos as the rest of the series. They aren’t as good as Legos but they at least stick together better than the components from most of the other games in the series. Building the ships is also kind of fun and even somewhat feels like using actual Legos. The cardboard pieces are of a decent thickness even though the gameboards are harder to put together than they should be. Otherwise the components are pretty typical of what you would expect out of a Hasbro game.

Should You Buy U-Build Battleship?

At its core U-Build Battleship is basically the same as normal Battleship. The only thing that distinguishes the two games is that U-Build Battleship includes a special rule where you get to call out several locations each turn. On the positive side this mechanic speeds up the game quite a bit and it adds a little strategy to the game. On the negative side though it ends up adding even more luck to Battleship. Whichever player finds the other player’s large ships first is likely going to win the game as they will get to pick more spaces each turn. This leads to a problem where the leader is likely going to just extend their lead throughout the game.

If you would like to purchase U-Build Battleship you can find it online: Amazon